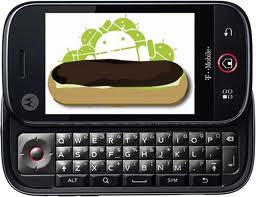 I think the chief complaint behind companies who insist on having the own software overtop Android, be it Blur, Sense, or TouchWiz, is the delay in updates. Here I am, probably only a few short weeks, a month at most away from seeing Gingerbread Stock on my Nexus (I’m guessing – that’s not fact) and there are phones out just now getting 2.1! It’s already been decided that many of those phone will never see “official” 2.2, though we have clearly see that when there is a will, there is a Froyo.

The 2.1 update is still significant. It bring a broader Market access, native battery data, native task management, and tons more. So when the file for 2.1 arrived on the Moto website, I was finally able to bring my wife out of the dark ages. Since nearly every non-stock update has had one issue or another, I kept an eye on it for the last 24 hours – here’s my report. 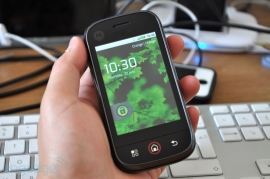 Immediately upon reboot, you can see the graphical enhancements. The Blur menus have all been touched up and are looking nice. Not so many flat colors and sharp edges, but softer tones and curves that make it easier on the eyes. The window notifier at the top has been replaced with the DroidX-esque iconography for switching homescreens. Swiping between screens is nice and smooth, and the updated Blur widgets are pretty snappy. Out of common sense, I haven’t tried a Live Wallpaper, though that has more to to with the screen quality and the processor than the software. In comparison, the update actually causes the device to run smoother than my Motorola Charm, which came out with 2.1 preloaded. While this is still technically a beta, it’s a solid beta, though not without flaws.

There’s very little about the base package that I did not like, but the update did cause me to slightly soften my opinion of Blur. When you leave the base package, however, things change slightly. Some of my daily driver apps, like Last.FM would no longer allow me to login, though I expect this is more of a developer problem than a manufacturer one.

This is the kind of improvement that will make phones like the Cliq usable until it’s time for a handset upgrade. It’s not the fastest phone on the market, but the update offers a significant overall performance boost. And, who knows, now that a legit 2.1 is here maybe the Moto Modders will put out some 100% functional ROMs to support it. CM5 for Cliq anyone?