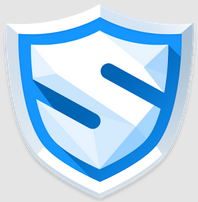 One thing that is getting more and more necessary on our Android devices is the need for mobile security protection. According to a Forbes article from 2014, 97% of mobile malware targets Android devices, whereas iOS malware takes less than 1% of the share. This is most likely due to the fact that Android applications can be downloaded from third-party sources and not just from the Google Play Store. While it may be a way to get paid apps for free, it isn’t always safe.

360 Security – Antivirus Boost, made by a Chinese company called Qihoo 360, brings a solid, intuitive, and well-designed antivirus program to the Android platform. The app comes with a multitude of features aside from just antivirus protection, such as an app manager, memory booster, junk file cleaner, and real time protection on top of it all. 360 Security is running version 3.1 and it brings along with it a very nice Material Design interface that matches up well with Android 5.0 Lollipop.

The one thing that I was worried about when booting up 360 security at first, was ad placement because it is a free app. Almost all of the free apps on the market place come with some sort of ads, but to my surprise, Qihoo did a very good job of hiding their sponsorships. In a small box in the top right corner of the app, there is what they call an “AppBox”. This is where all of their ads reside. I would like to see more applications follow this, so it definitely has a good start.

The interface of 360 Security is definitely one of the highlights of the app. When you boot up the app, there are three main categories on the homescreen, which are “Boost”, “Clean”, and “Antivirus”, in that order. The rest of the features and settings reside in a nice slide-out menu on the left side that. Another win for 360 Security in my book is using the same style slide-out menu icon as Google has employed on their apps. The icon, transitions from the three solid lines into a back arrow, just like the Google apps. It’s little things like this that show how well-designed an app is; they didn’t leave anything out. 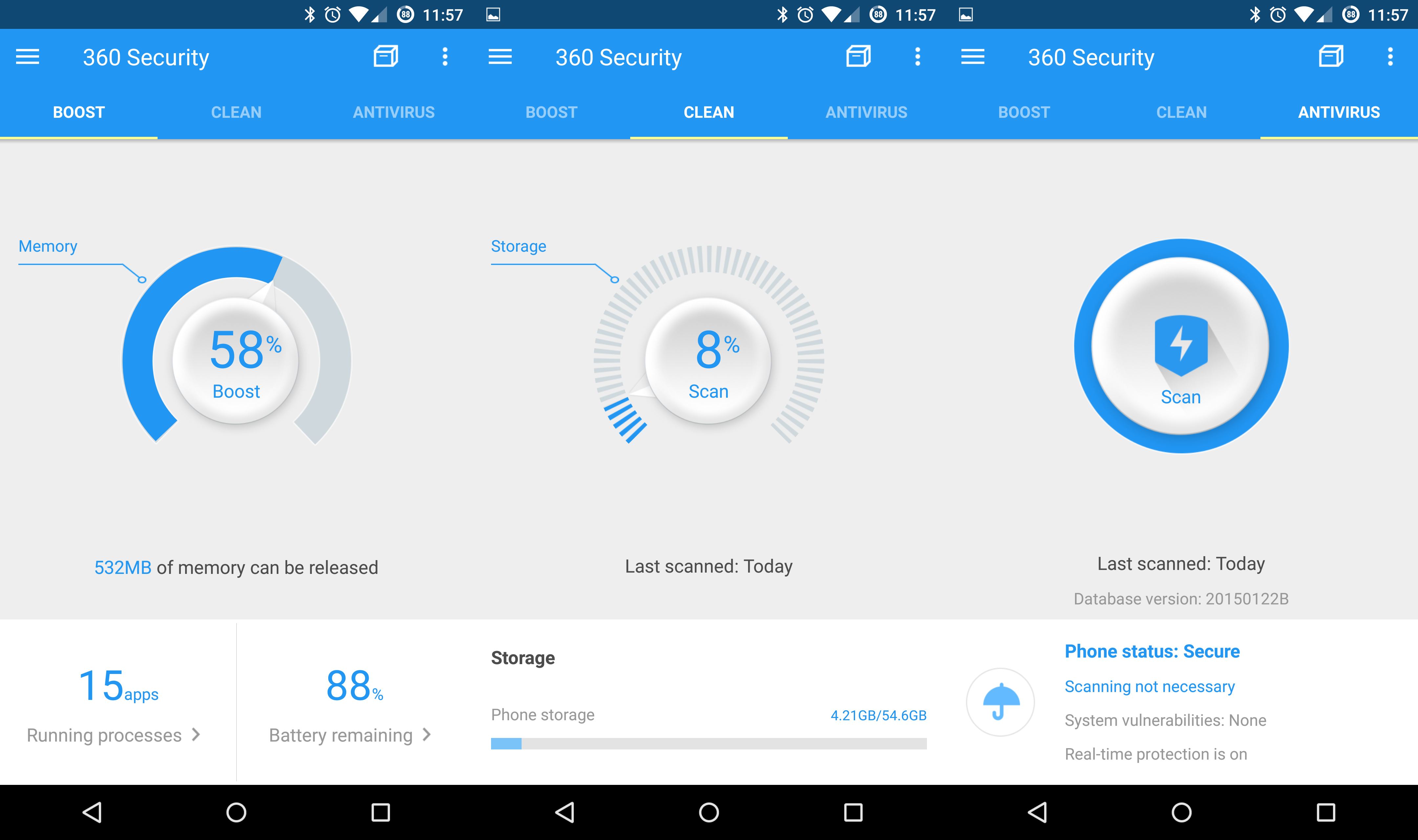 With each category, as stated above, they give you detailed information about how many processes are running, battery percentage, storage, and phone status. 360 Security does a very good job of laying out the interface to make it as easy as possible for you to get the most protection for your device, with one click.

The Boost feature is essentially an application killer. It says how much memory is taken up, as seen by the percentage above, and it also states how many processes are running. You can click on the “running processes” tab to view all processes. Similar to the one in your app category in your settings menu. What’s nice about this interface is, you are able to select and deselect apps you wish to kill. Unlike the stock application killer, you are able to kill multiple at once to increase convenience. 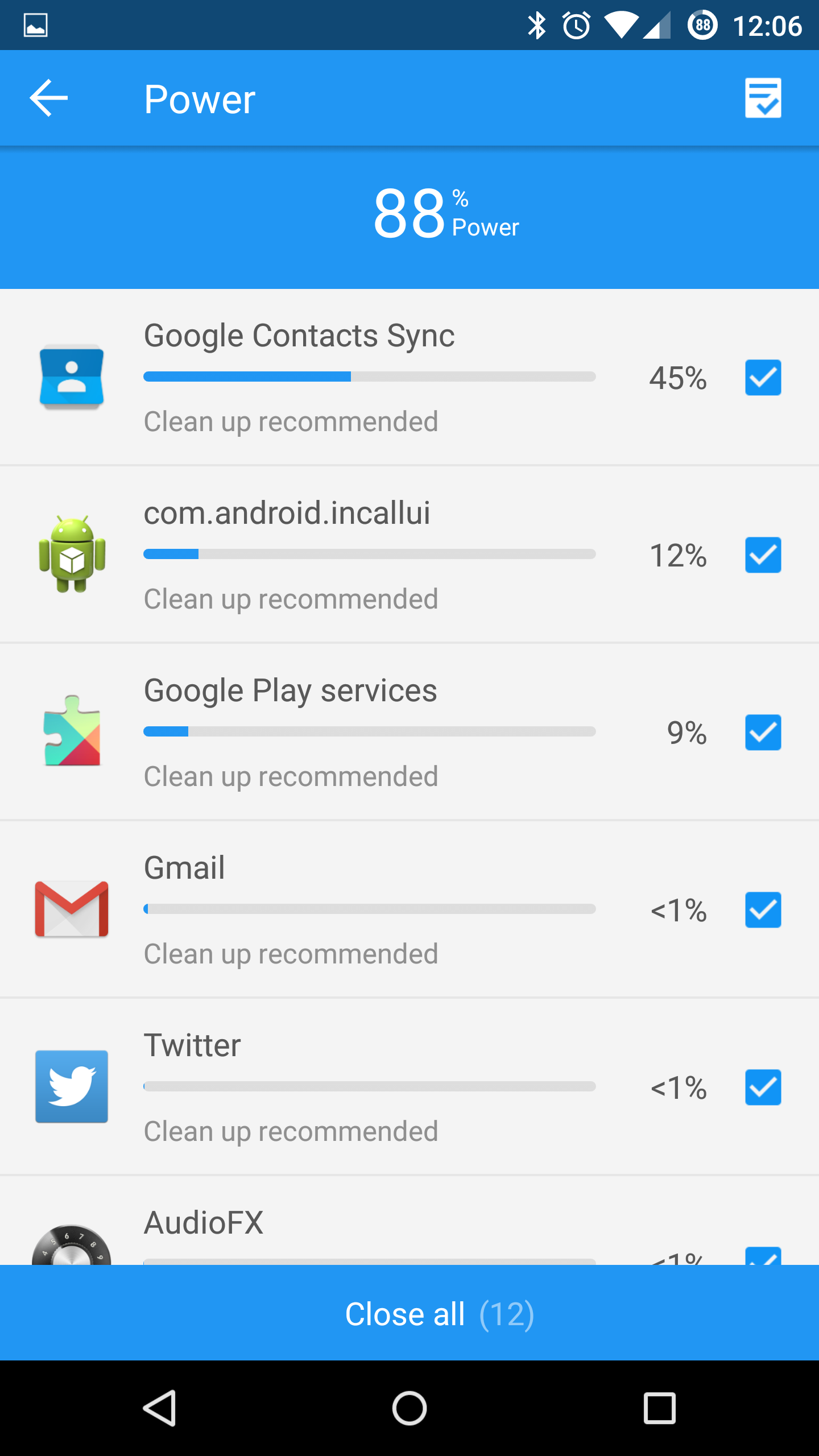 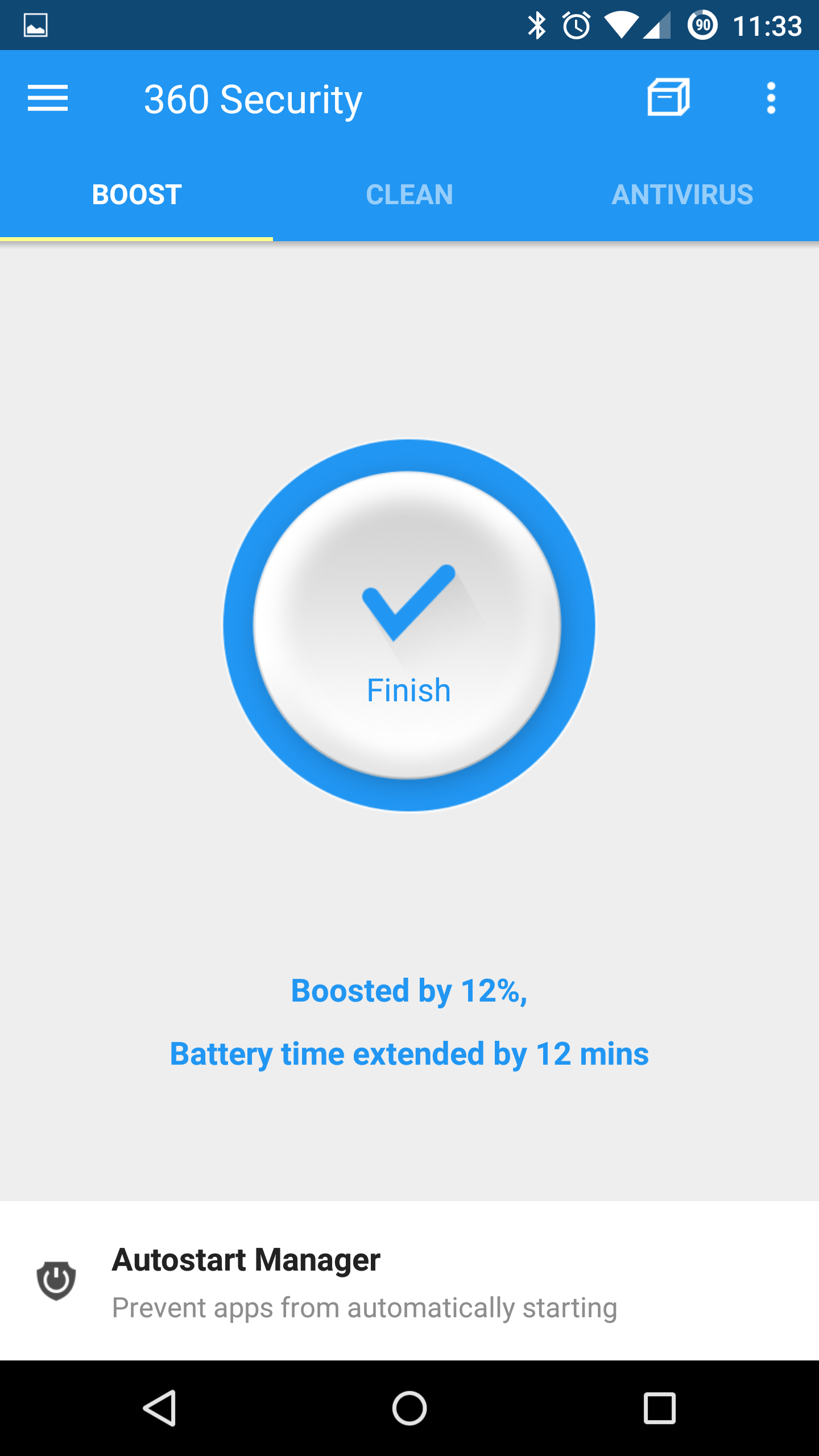 In addition to that, it can keep track of battery statistics as well. The one thing I did notice with these battery statistics is that they conflicted with what my other applications such as Wakelock Detector, Better Battery Stats, and even the stock battery stats reported. I found I didn’t pay much attention to this, as it was inconsistent. Another issue I have with it, is when you clean up your battery, it estimates how much battery life you gained. It usually ranges from 10-20 minutes. While this is helpful, it is very hard to prove, as 10-20 minutes is a very small amount of time.

I would definitely like to see this aspect of the application get overhauled, as it is very informative and nice to look at. The one thing it has going for it is functionality, not performance. It tells you what is using said percentage and you can choose which apps you’d like to kill. So for functionality, it definitely gets the mark on this one.

The ‘Clean’ falls into the same category as the battery statistics. While it is very functional and very informational, it seems to miss the mark as what to clean. I may be too picky, but when  you run the clean feature it picks up just about everything, and wants you to delete it.

I have a custom recovery, backup, and the fK Kernel on my Nexus 6, all of which the app counts as “app cache”. I can’t really fault it for that, but it is kind of annoying if I go to use the clean feature and have to un-check all of those. Other than that, it finds what they call “system junk files”. This is essentially the same thing if you were to go to your storage in the settings (on Android Lollipop) and clear the “cached data”. 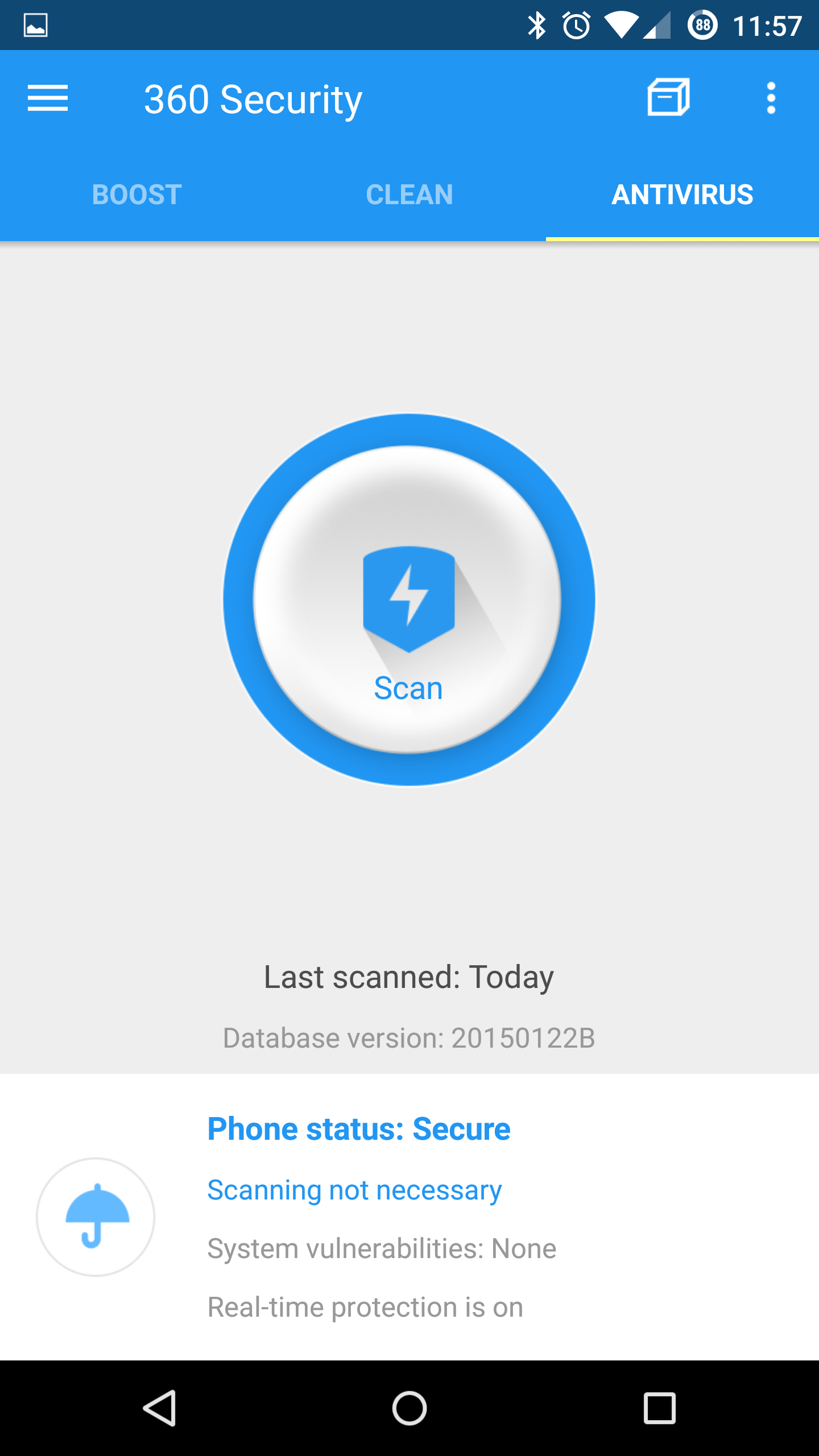 The antivirus part of 360 Security is definitely the most refined part on this application, as it should be. When I first booted up the scan on my device, it took around 30 seconds to complete, so not long at all. It tells you your phone status, and thankfully for me, I had no malware/viruses on my device (surprise!). The second time around, the scan time was cut in half, so it does well optimizing what needs to be scanned.

Once again, 360 Security does a great job of displaying information that is helpful. It tells you if it recommends a scan or if your phone is secure. If it is not secure, it will pinpoint which app or file is the source and recommend you delete it.

It also has real-time protection, so you don’t have to worry about manually scanning to find a threat. You might think that it will have a drain on battery life, but that is not the case. On my Nexus 6 I found no drain/wakelocks coming from 360 Security whatsoever. They definitely know what they are doing and try to optimize every aspect of the app.

Some other features that 360 Security comes with range from a few tweaks, ability to enable root access (mine was enabled for this review), data monitor, and even a “find my phone” option. While I didn’t spend much time with the additional features, they are definitely nice to have, but once again, they just are duplicates of what Google already has.

With Android there is already a find my phone feature, Google it, and there is also data cap limit you can set to your device. 360 Security may pull off the aeshetics a little better, but “if ain’t broke don’t fix it.” It just seems as if they are trying to do too much with what they were given.

360 Security is definitely one of the best looking antivirus applications on the market. Not only does it feature a beatiful interface, it is very simple to understand and unleashes a ton of features in one single app. It’s antivirus portion is the strongest part of the app, as it should be, but also features a cleaner tool as well as a memory booster.

The two latter options seem just as add-ons to what Google already has employed on Android, but it is convenient to have them all in one place. To me, this is a great app if you are looking for an antivirus app for your Android phone, but it has me wanting more.

I’m sure this app will continually get better over time, but some of the add-on features just seem as if they are reaching to make the app all-inclusive too quick without making sure all the features work 100%. Maybe I am too picky or my standards are too high, but if they want me to make this my go-to app for battery, memory, and antivirus monitoring, they will just need to touch it up before it replaces the stock options and better battery stats/wakelock detector.

If you would like to download 360 Security, you can find it at the Google Play Store below. It doesn’t cost a cent!