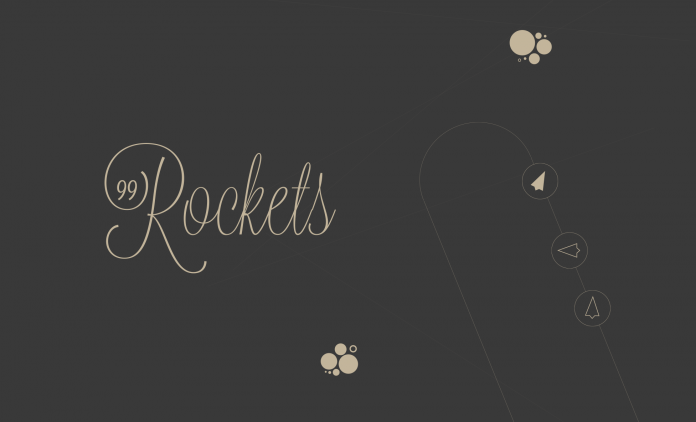 99 Rockets is an Arcade style game that requires quick thinking and your complete attention. Somewhat immersive, the app is based around the challenge of successfully aiming and launching at floating bubbles.

Due to the nature of gameplay, there is no setup required. All you need to do is download the app and open it. There is also unfortunately no Google Play integration, which is no deal breaker, but something we’d nevertheless like to see. The app itself also has virtually no settings and adjustments.

An arcade game typically has the same idea and method throughout the whole game, increasing steadily in difficulty as you move up. 99 Rockets is just that. Your goal is to pop all 99 bubbles throughout the game by carefully aiming and shooting your limited arrows. It sounds easy, and for the first few levels, it sure is. But then you start moving up, and things begin to change a bit. Here’s a quick thirty second video of some gameplay to let you have a idea of what the game is all about:

After these first few levels, I became frustrated. Not because of the gameplay difficulty, but because of the way that you have to save your progress: you have to watch an advertisement. Yes, you read correctly. If you don’t watch adverts, you will not make any progress. Quite ingenious, I must say, but nevertheless outright presumptuous. It’s alright if you don’t voluntarily watch them, but you’ll just have to start from level one whenever you make a mistake (which will be very often). Just in case these adverts weren’t enough, there’s more video adverts slapped in when you progress between levels. Or, you could always pay the $0.99 IAP and unlock the advert-free version. I shamelessly wasted 10 minutes of my life saving my progress in a single night.

Barring the adverts, I quite liked the game. It can be played in a situation when you have two hours to spare along with your entire concentration, or when you have a two minute toilet break. There aren’t annoying notifications that constantly make you feel obliged to open the game and play it. I also think 99 is the perfect number. You don’t lose motivation and you realize after a few rounds that the end is not that hard to reach. Take note that there are 99 bubbles to pop and not 99 levels.

The arrows change quite a bit as you progress. You get some that shoot in three directions, while some spin around and others don’t. Nothing too complicated.

99 Rockets is almost a great arcade game. As much as I’d love to, there is no forgiving the app developers for the adverts. Sure, adverts are a necessary evil, but certainly not to this extent. Nevertheless, the game had me wanting more and the annoying pop-ups were not enough to deter me from playing. I would still recommend it despite my differences with it.