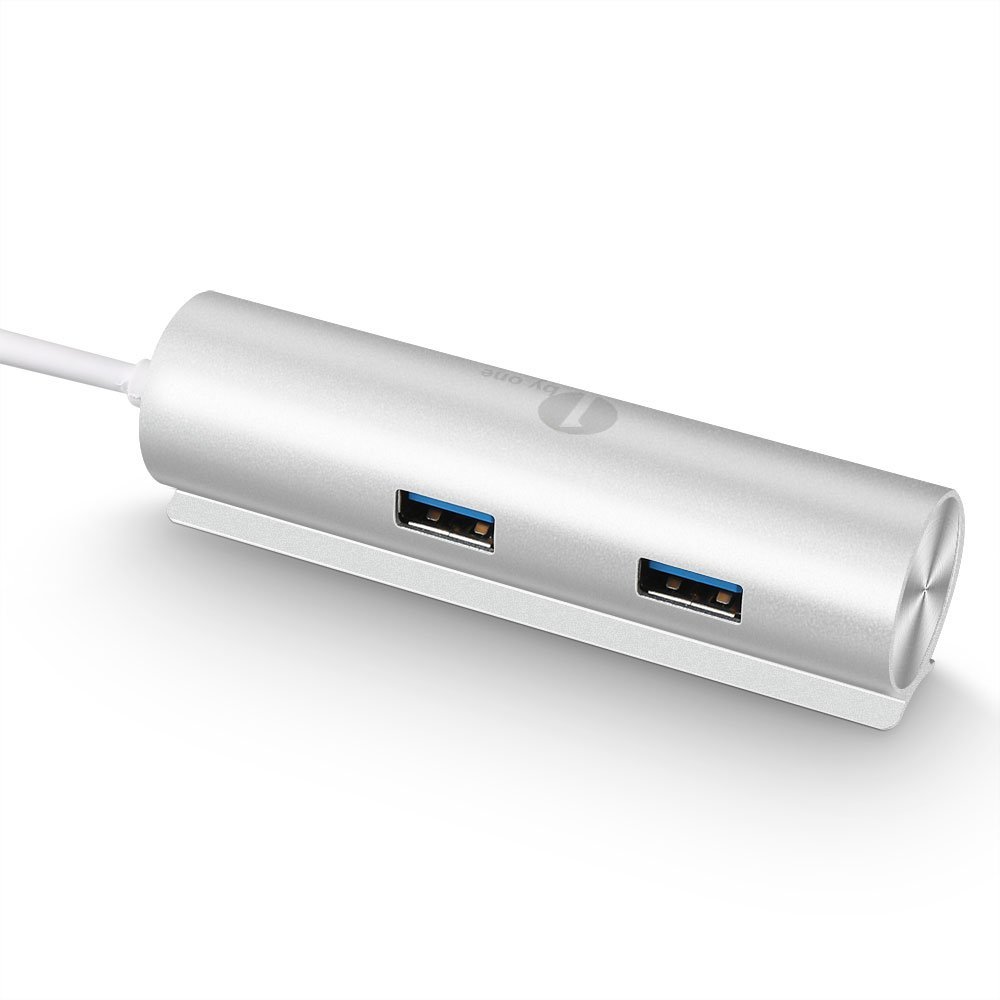 The hub is really easy to get setup. The hub is plug and play which meas that you can just plug it into your USB port and you are good to go!

There is also a velcro strip that you can use to stick your new shiny USB hub to some surface in order to keep it from moving around.

Then you can velcro your hub into a single place so that it isn’t sliding around on your desk.

In my case, I have the velcro strip in the center of my laptop lid. I don’t actually have a desktop computer, so placing the hub in the middle of the lid allows me to open and close the laptop without any problems while leaving the hub attached and plugged in.

After you decide where you want to stick your velcro, that is it! The hub is plug-and-play. There isn’t anything special to it. You just plug it into an open USB port (preferably 3.0) and carry on with your life.

The only thing about the setup is that I wish it were clearer what the velcro was for. I didn’t even realize that it was velcro at first. I thought it was just a double-sided strip of 3M adhesive.

There isn’t really anything special to mention about the usage. It is basically like adding three USB ports to your computer. Nothing fancy.

In my usage, there haven’t been any significant speed drops or declines in power output.

Flash drives and other external storage perform just as well without any issues.

There haven’t been any complications to arise in the couple of weeks that I have been using the hub, and I seriously doubt that you will have any issues using the hub as well.

The build quality actually surprised me. In truth, I wasn’t expecting much from a $13 hub. The hub itself is aluminum. It feels nice and solid and looks great too.

The best part is the USB ports themselves. There is no wiggling around in the ports. When you slide in a USB memory stick or a cable, it stays in place. On most USB ports, my stuff wiggles around and occasionally gets disconnected.

This is really annoying with my mouse’s nano receiver. Right in the middle of an FPS, the receiver will disconnect and leave me high and dry.

Now, the nano receiver sits in the hub, and the hub’s USB fits into my laptop’s USB port without the wiggling that other USB devices would have in the same port.

Okay, Cooper, this is great and all, but why would I want this?

Great question, I am glad you asked!

The 1byone USB 3.0 hub is great if you have limited ports and they are all tied down by other gadgets. On my laptop, I have a grand total of three ports.

One port houses my mouse nano receiver. Another holds the receiver for my keyboard.

With this hub, you are suddenly able to utilize more ports despite all of your fancy wireless gizmos!

Another great use is for those laptops that only have one USB 3.0 port. If you want to use more than one device at 3.0 speeds, this is the only way to do it.

The hub will give you four USB 3.0 ports instead of the one allowing you to use more devices at 3.0 speeds instead of 2.0.

All things considered, the 4-port USB 3.0 hub is worth it.

Currently for less than $13 on Amazon, I don’t see any reason not to grab it!

Even if you don’t have that many lifetime USB port hoggers, you will still get some use out of this port. It comes in handy when you get extra productive and your storage devices won’t even be slowed down thanks to the USB 3.0 standards.

Sure, there are other options on Amazon, for cheaper too. However, those options don’t offer the same sleek appearance or are more pricey.