Over the past few years smartphone  companies have been making our phones bigger and bigger and inexplicably the batteries don’t seem to change much in size. The iPhone 5s was a 4-inch phone and sported a 1560 mAh battery. Fast forward two years to the iPhone 6s, which grew by nearly an inch diagonally, which results in 3.11 square inches of additional surface area and yet the 6s only has a 1715 mAh battery, that’s only a 155 mAh improvement to power a much larger (albeit same pixel density) display in a phone that is two years newer.

I know we’re not here to talk about iPhones and I’m probably going to be chased through town with torches and pitchforks for mentioning it but it just goes to illustrate my point that a lot of the biggest smartphone manufacturers don’t seem to have our best interests at heart when they design their latest hardware. We need a battery that gets us through the day, not a battery that gets us through to lunch. That’s where products like the mophie powerstation mini come in.

Mophie’s powerstation mini comes sporting a 2500 mAh battery, that’s only 50 mAh less than the Galaxy S6 has on board and it comes in a very handy 1.92 x 3.64 x 0.53 inch package. You might not want to carry it around in your pocket, since you (if you are anything like me) are already loaded down with more than enough to keep your pockets full, but you could and if you carry a purse or a backpack then you won’t even notice it’s there.

The benefits of the powerstation mini are obvious. If you don’t have any power left, it does. It will charge your phone (or tablet) at a rate of up to 1A, which is pretty average for this type of product. At that rate, it will probably take about twice as long as what you’re used to with a standard wall charger and most modern smartphones, but this is a mobile charger we’re talking about.

When I plugged it into my Nexus 6P, it took it from 20% to 50% in about 45 minutes, which was more than enough battery to get me through the rest of my day and keep me from having to worry about whether I’d be stranded without my phone. The beauty of this, though, is that you can have it with you when you’re hiking or at the beach or at a conference like CES or MWC (where battery life is as valuable as gold).

It’s also really nice that the powerstation mini has an LED indicator that tells you how much power is left. Two LEDs tells me that there’s about 50% battery left and that means that I can charge my Nexus 6P about 1/3 of the way, which is a huge help when you’re still a couple of hours away from a proper wall charger. 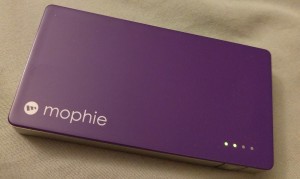 The powerstation mini isn’t without its faults. First, it doesn’t come with any cables for either charging it or charging your phone, though you could presumably use the same cable for both if your phone has a micro-USB port. And though we all have plenty of those cables lying around, I’ve found that it is far more convenient when using these types of chargers to have a very short cable or a very long cable and a short one is much more portable.

I use something like this to cover myself in all situations. The powerstation mini is also rather pricey compared to its competitors, coming it at a retail price of $59.99, but Verizon currently has their accessories at 30% off, so you can snag one for only $39.99. 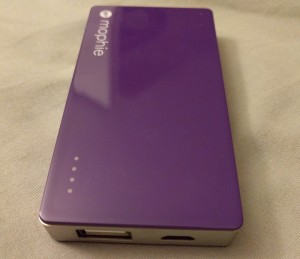 The mophie powerstation mini is very good at what it does, but there’s nothing that really differentiates it from its competition and it’s rather expensive. On the other hand, it’s coming from a reliable and trustworthy brand and is covered from the manufacturer by a year-long warranty, which much of their competition isn’t going to offer. As with most things, you have to weigh the good with the bad and come to your own conclusion as to whether this product is right for you.

Mophie’s latest lets you triple up the wireless charging