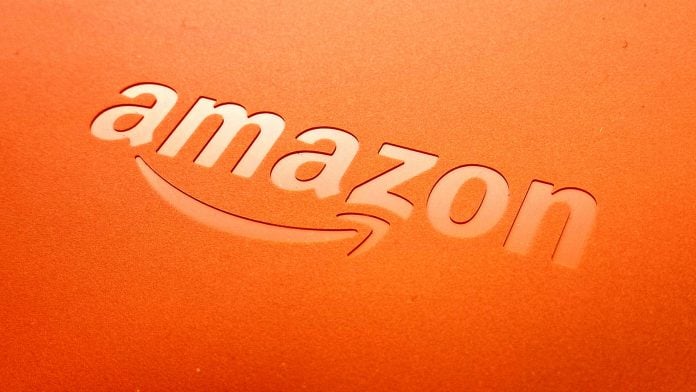 The 2017 Amazon Fire HD 8 experience is perhaps the best tablet you’ll find in the sub-$100 price range. At only $80, it’s less expensive than last year’s take and yet features improved Wi-Fi and audio.

Whereas only a few years back we might have recommend proceed with caution on a tablet that carries a price tag of $100 or less, today that’s much easier to do. No longer is that space occupied by no-name and lesser known brands. Indeed, it’s now Amazon’s game to lose. 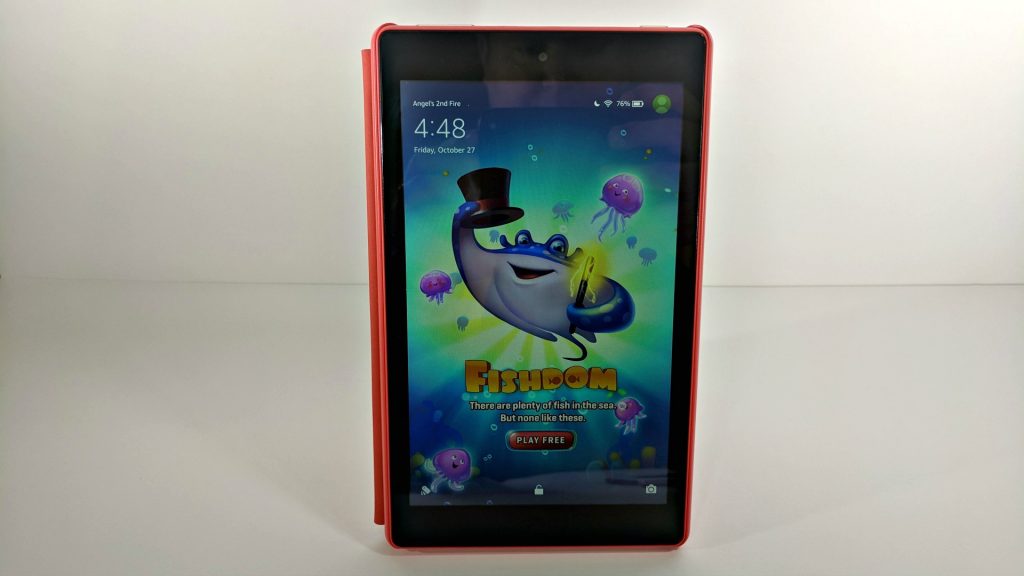 Don’t get us wrong, this is not a performance-based device. You won’t use this one for heavy work needs, it’s not rugged, and it doesn’t come close in benchmark tests. Hell, it still doesn’t even have the Google Play Store on it. There’s plenty here that would cause us to look elsewhere if we had different needs. The thing is, though, the Fire HD 8 tends to meet our needs again and again.

Available in black, blue, yellow, and red (the color we were sent), the Fire HD 8 measures 8.4-inches by 5-inches. Just a shade under ½-inch thick, it weighs about 13 ounces. 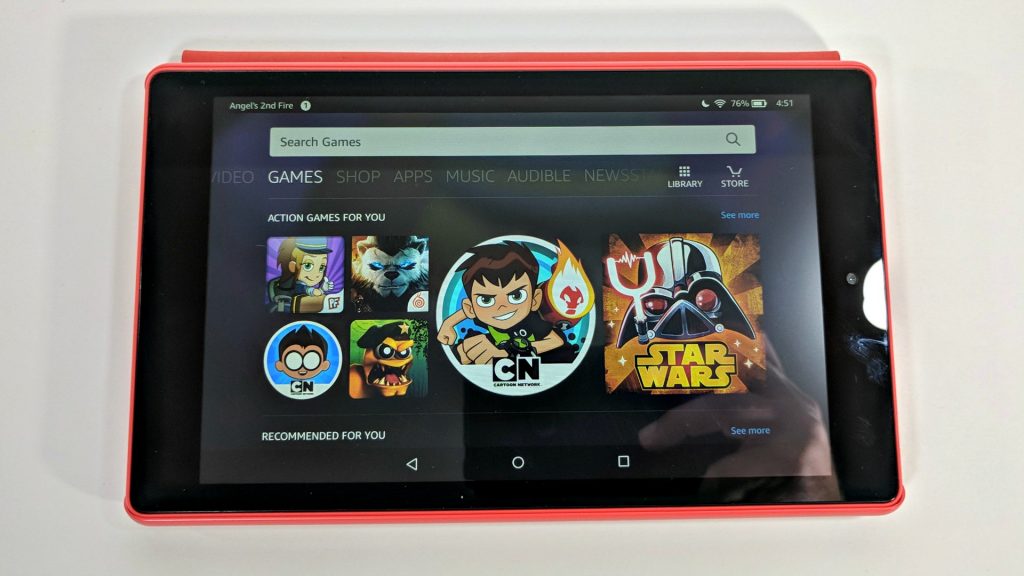 The HD 8’s LCD display is 1280 x 800 pixels, giving readers 189 pixels per inch. It’s not the brightest image we’ve seen and it sometimes skews a little bit yellowish, but we’ve seen worse in other tablets. Toggling the blue light filter feels much stronger than what we get in most phones and tablets. Nevertheless, it works just fine for games, magazines, and other media. 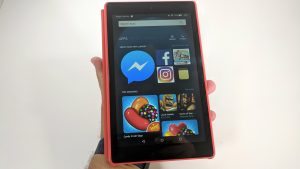 If there’s one thing we could say about the Fire HD 8, and other tablets from Amazon, it’s that we don’t know what orientation is the best. We’re torn between landscape and portrait, going back and forth depending on our usage. We like both settings but would appreciate if it felt “right” in one or the other.

Given its size we love to read magazines and books on it. To that end, portrait mode works well, spreading pages out to take advantage of the screen. But, just about everything else finds us flipping on its side. Or do we have it backwards? 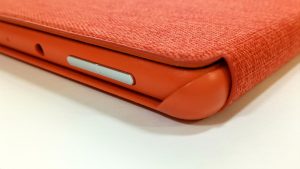 The speaker and button placement try to answer this question. The dual stereo speakers are on the bottom when in landscape, moving to the left side when in portrait. It makes sense that you’d like a balanced audio experience when watching video or playing games. Reading, however, doesn’t require speakers so it matters little which side they’re on.

While in portrait orientation you’ll find the power button, microUSB port, microphone, headphone jack, and volume buttons. They run in that order from left to right. We might have preferred moving the headphone jack to below as the cord can sometimes get in the way of reading.

The operating system, Fire OS, is based off of Android, gives you most of the flexibility and customization that you get in other Android devices. To be clear, though, Amazon stops short of giving you an outright “tablet” experience. 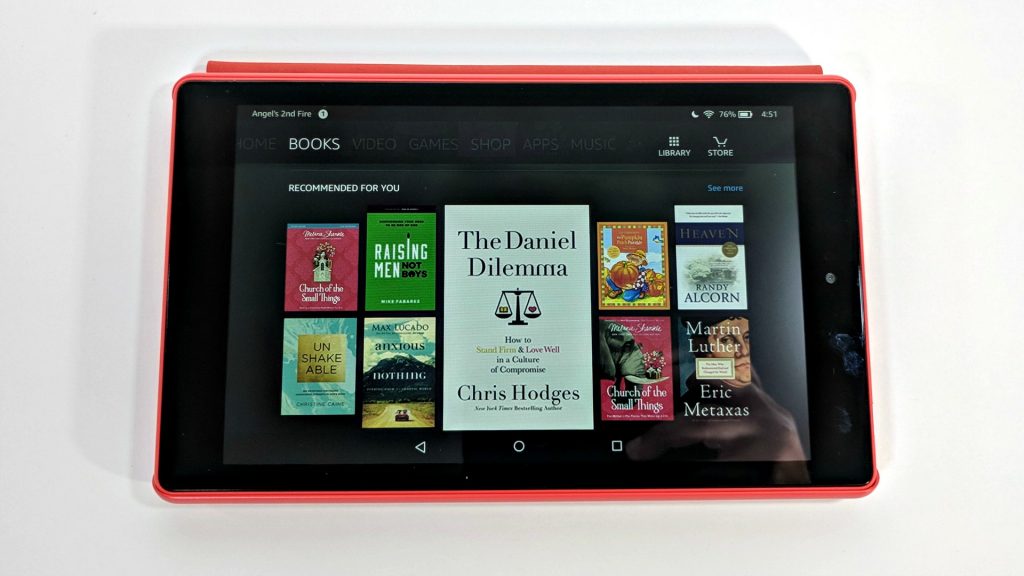 If you’ve never spent time with an Amazon tablet, we’ll clear things up for you. It’s all about the Amazon ecosystem. Period. Not that this is a bad by any stretch of the imagination. In fact, it’s gotten much better over time as the company continues to spread its wings.

If you’re not married to Google or Apple’s services, and don’t need to be overly productive with your tablet, the Fire HD line is a wonderful family of products. You can get most of the applications through Amazon that might otherwise be found in the Google Play Store. Moreover, a little bit of tinkering and time could yield a more traditional tablet or Android experience.

As for this particular build of the Fire OS, we’ve come to like it but have never really been in love with it. To us it feels a little bit too busy on the home screen. The mix of text and graphics can sometimes overwhelm; things aren’t always in the most intuitive place. New users might not feel the same way, but season Android tablet users, or those who have used older versions of Amazon’s tablets, may get discouraged in the first few days. 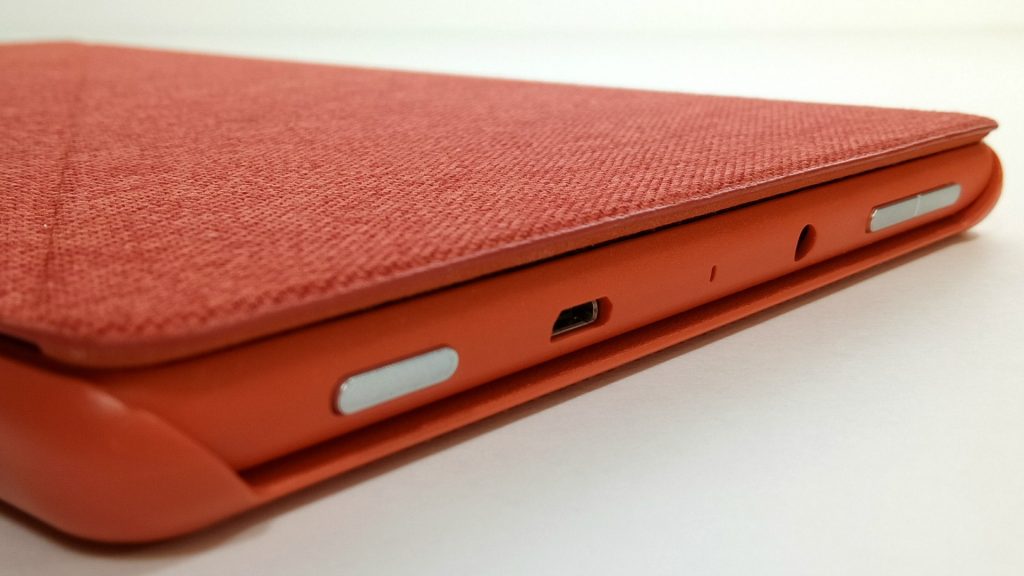 One of the best words to use to describe Amazon tablets is “consumption”. Whereas a more traditional, or powerful tablet/2-in-1 might lean more towards productivity, the Fire HD 8 is all about taking things in. That’s music, movies, books, audio, and games. Once you’re in the world of Amazon it’s hard to leave.

Should you already be someone who has purchased books, audiobooks, or other content from Amazon over the years, you’ll find it all here. Everything synchronizes nicely and is presented in a somewhat intuitive manner.

You’ll notice that just about everywhere you go on the Fire HD 8 you will be presented with some form of advertising or promotion. Amazon is the best company in the world for knowing its users and making smart recommendations.

Indeed, the longer you use the tablet, or Amazon as a whole, the less “in your face” this feels. Over time it becomes a case of, “Yeah, I should order more of those” or “I actually am interested in checking out that book”.

Those of you who have spent time in Google’s ecosystem might stumble a bit as you get started with the Fire HD 8. You won’t find any of the standard apps or services installed; they’re not in the Appstore, either. And, while most of the other big names in the mobile space are present, you will occasionally run into the rare dead end when trying to find an app.

As touched on before, you can go about installing the Google Play Store manually. Doing so doesn’t really void any warranty or cause issues and can open the door to a wider world of apps. If you go that route, proceed with caution and back up anything important first.

Amazon does a tremendous job giving users an experience that works great for the entire family. Parents can take advantage of Amazon FreeTime which lets mom and dad tailor the UI, background color, and fonts as well as handpick the apps and games. Additionally, parents enable set restrictions and daily limits on games and video and leave unlimited time for reading. 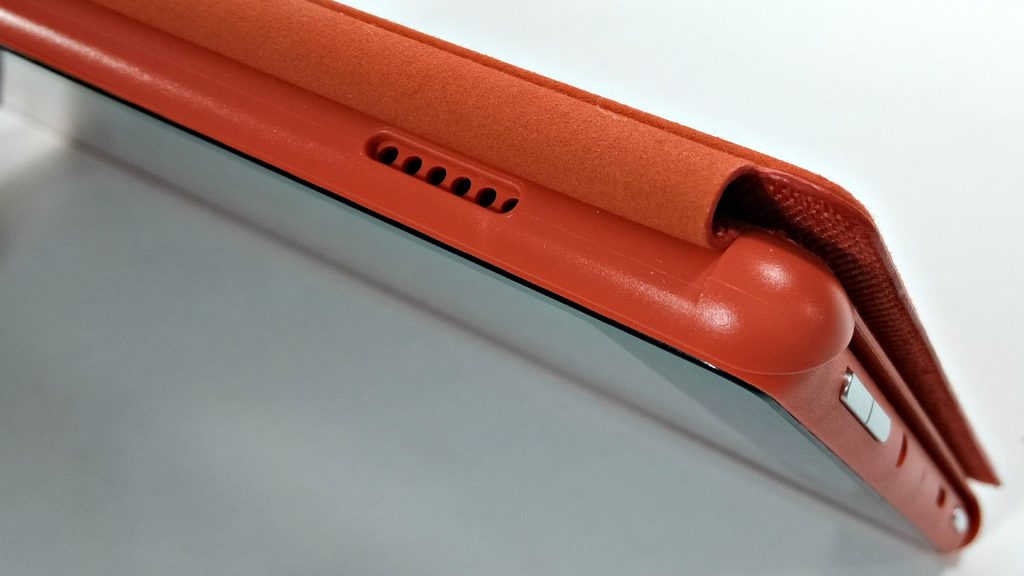 As you would expect, Amazon’s new tablets support Alexa, but it’s done a little bit differently. Rather than having the always listening “Hey Alexa” trigger, you’ll hold down the home button to enable the voice actions.

The 1.3GHz quad-core Mediatek processor is bolstered by 1.5GB RAM and is enough to get the job done. Thanks to the interface and tightly guarded ecosystem you’ll hardly notice that this is a fraction of the hardware that powers most devices. Should you start side-loading your own apps or tinkering with the UI you might slow things down or run into stutters.

Generally speaking we found the Fire HD 8 to be snappy with apps opening quickly. Magazines, books, and other media were speedy enough for our liking. The tablet offers both 2.4GHz and 5GHz connections for Wi-Fi; we found the latter to be more efficient in our time with the tablet.

The Fire HD 8 comes in 16GB and 32GB storage capacities with about $30 difference between the two. A microSD card slot allows for more storage of media and apps. Our 16GB demo unit gave us roughly 12GB of space free after all of the pre-loaded apps and content. 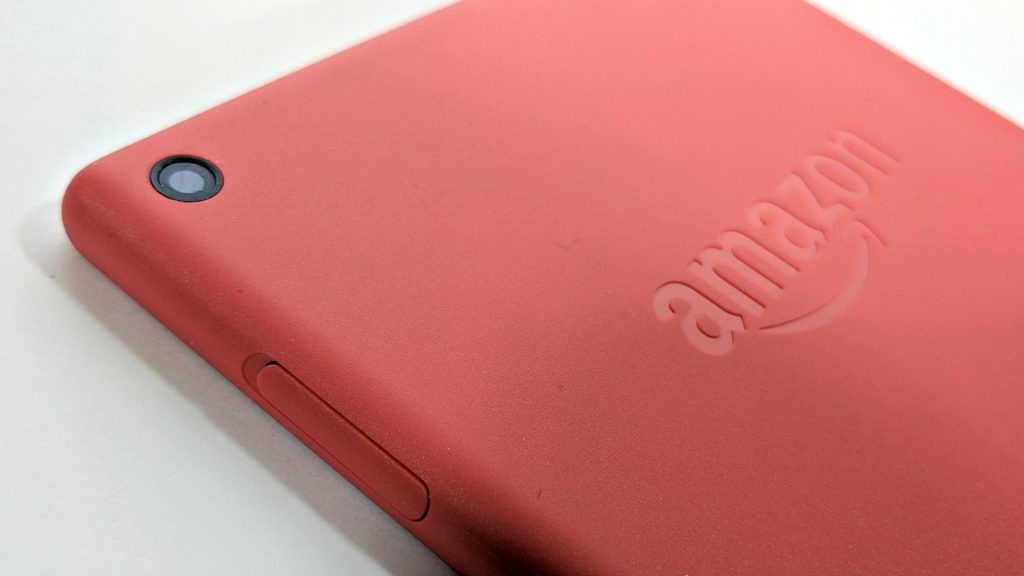 We were impressed with the sound of the tablet’s two speakers. While you might find only one speaker on a budget-friendly tablet, Amazon gives us a pair of bottom-mounted (landscape mode) speakers. You’ll find a loud, clearly defined sound that complements video, music, and games well.

We wish there was something nice we could say about the 2-megapixel rear camera but it’s hard. Really, we’ve never actively sought to capture photos from an Amazon tablet, regardless of the model. Children, however, seem to enjoy it, and use it in select games.

As for the front-facing camera, well, it’s the same sentiment. It’s there if you need it but it’s VGA quality and doesn’t perform all that great in lower lighting conditions.

Battery life is rated at 12 hours but that is based on mixed usage. We didn’t track it by hours, but our experience was that roughly every few days we could charge it up for a short bit and not have to worry.

Watching video for longer periods, and at the brightest settings, we could get well beyond four hours out of the battery. Keep a portable power supply handy if you plan to travel over a weekend, especially if you have children.

Without question, the Amazon Fire HD 8 is best low-cost tablet experience you can purchase. With pricing that starts at $79.99, it works exceptionally as an eBook reader, magazine and comic book reader, audiobook device, and media tool. 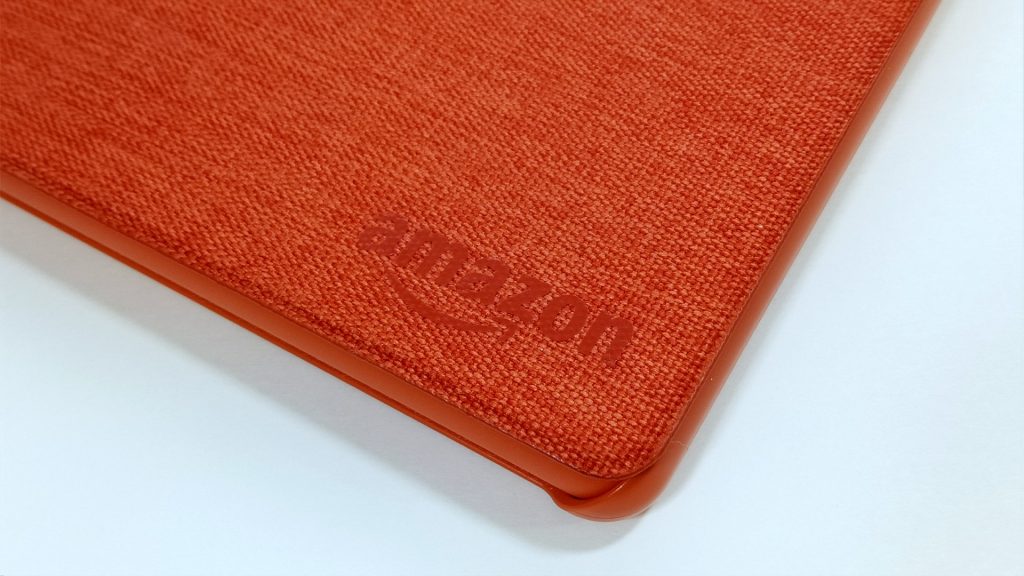 Amazon has done a great job of evolving its family of products and services and the new Fire HD 8 is a solid way of delivering it all in a portable slate. It’s the right size to read in short bursts but can get a little heavier in extended use.

If book reading is primarily the feature that you care about, go with a traditional Kindle. For all other practical, and consumption-based purposes, the Fire HD fits the bill. If you’ve got Amazon Prime, or use Alexa on a regular basis, you’ll love having everything close at hand.

As much we advocate for stock Android and more traditional tablets, the truth is that we often grab a Fire first. The last few years have seen us packing and toting around the Amazon product line for kicking our feet up and taking in various forms of entertainment.

It’s easier for us to single-task and focus on a book or magazine when the tablet isn’t always trying to synchronize our Gmail or Outlook accounts. While we can add our email addresses and mange things here, we like leaving them off and unplugging.

Over the last five years or so we’ve found ourselves being slowly sucked into the black hole that is Amazon. The company has its hands in a number of areas that we like and is always looking for new ways to impress. The Fire HD 8 is an affordable way to stay connected to all things Amazon.

You can purchase the Fire HD 8 in two storage capacities. For $79.99 you get the 16GB model with advertisements on the lock screen and occasionally throughout the experience. For $109.99 you get double the storage capacity at 32GB; the offers are still included. Amazon terms these tablets as “With Special Offers”