For those that may not know, Anker has a unique line of projectors under the Nebula branding. These Android-powered units offer consumers projected entertainment without breaking the bank. We reviewed the Capsule II projector a few months ago, but now it’s back, and it couldn’t be cuter.

Anker has added some additional design flair to the original Capsule II that Star Wars fans will immediately recognize. With a partnership with Disney, the teams have produced a limited run of Capsule IIs with a custom paint job of none other than R2-D2.

As far as internals and specs, the R2-D2 Capsule is identical to our previous test model. But honestly, who cares! It looks like one of the most famous robots in history. The hardware is still good, however.

You get an Android TV experience running a 720p projector capable of 200 lumens across up to a 100-inch screen. It also has a robust 8 Watt speaker system and an internal battery for up to 2.5 hours of dedicated wireless playback.

You’ll also see the same ports on the back of R2-D2. You can add peripherals via a 3.5mm headphone jack, HDMI input, USB, and charge via the USB-C port with fast charge.

Navigating the OS is a breeze and the UI works just as you’d expect. If you’ve used an Android TV on any other device R2-D2 will feel right at home. From your apps recommendations on the home screen to the Google Assistant, it’s all right there at your fingertips.

Overall this experience is still really good. Other than a few hoops to get Netflix up and running, it’s a solid Android TV device that you can literally take anywhere. I’ve used the original Capsule 2 in my spare bedroom, outside patio, and in my brother’s shop with zero complaints.

And if you want to supe up this new suit for R2-D2 the Nebula Capsule II also has Bluetooth onboard to add something like a couple of Soundcore Flare 2 speakers for real surround sound while watching. The dedicated speaker on the Capsule II is more than capable but adding a richer sound experience is pretty sweet.

All that fluff aside, we are here for this amazing new paint job! Anker and Disney have done a great job weaving this into the design and using the resemblance of the original projector to make R2-D2 really pop when you see it in person. 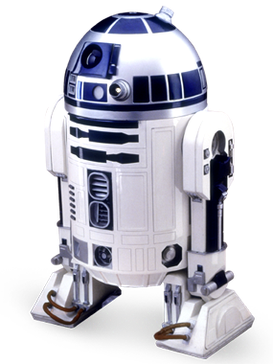 R2-D2 has a unique Droid design that revolves around a lens and only seems fitting that a can-shaped project bears the same look. Topped with a blue rounded rim, the R2-D2 Capsule captures the essence of the Star Wars character with ease.

The tweaks aren’t just visual. Anker has added a new boot sound that mimics the “speech” of R2D-2 as well. While it’s a small change, it really does add to the nostalgia wow-factor when powering up the Capsule 2.

While not all rebranded sequels are a good thing, I think Anker and Disney knocked this one out of the park. Seeing this as I opened the box immediately sparked joy. Add the details you see as you use it and the audial additions, and it’s a can’t miss.

Oh, and it’s a collector’s item. Anker and Disney are only planning to produce 1,000 of these little R2-D2 projectors. At a price of $699 of how can you not order one? It’s not an impulse purchase by any means, but how many times do you get to own R2-D2?

The Capsule II R2-D2 is available now on both Amazon and Nebula’s websites.

Portable and easy-to-install security cameras play an important role when it...
Read more

The gaming headset is the most important accessory when it comes...
Read more
Advertisment

Much like the Apple-centric options from last year, Anker is back and taking on the OEM chargers from Samsung. As an alternative to the...
Read more

There's only one thing more fun than signing up at an online casino: Using the best Bitcoin casinos online!
Read more

Eufy has been in the news plenty lately for security issues found with its cameras, but I'm not here to cover that. I'm still...
Read more

Portable and easy-to-install security cameras play an important role when it comes to home security. In this latest episode of the AndroidGuys podcast, our...
Read more

10 Best casinos on Android devices: Where to play Android casino games online in 2023

Android phone devices are widely used in the world of online gambling these days. Their operating system is open source, which makes...
Read more

Verizon often offers deals and savings on its products and services, giving customers a chance to keep money in their pocket. It's currently dangling...
Read more

Andrew Allen
Andrew is tech nerd and Linux geek who loves to experience the latest in mobile technology. When he's not glued to the web, he's a husband, father, and pit bull lover.
Advertisements