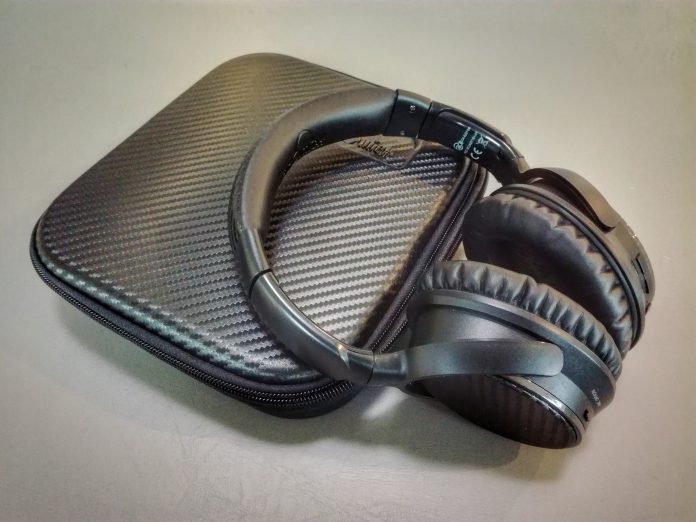 There are some people who splurge hundreds of dollars in crazy-expensive headphones because they want the best audio quality. There are people who think that the crappy headphones included with their phone are good enough. Then there are people that are willing to trade off a bit of quality in favor of an affordable set, especially if it brings additional features such as Bluetooth and Active Noise Cancelling.

For this ever-increasing customer segment, iDeaUSA has brought the AtomicX V201 headphones to market. If you want a nice looking, sturdy and wireless set with great battery life and good sound quality, then you’re in for a treat.

When opening the box, you will find a rigid case with a faux carbon fiber design. I didn’t expect a case with these headphones, considering that I’ve bought slightly more expensive headphones and they haven’t come with a case. Now I feel ripped off by them.

Anyways, inside the case you will find the following items:

It was a surprise to see the adapter, since, again, I’ve never had one included in any of the headphones I’ve bought. What I’ve seen included with other headphones, especially with Audio-Technica, is a 3.5 to 6.35mm adapter, and the V201 doesn’t include one. This is not a dealbreaker for 99% of people, and chances are that if you need one, you already have one. 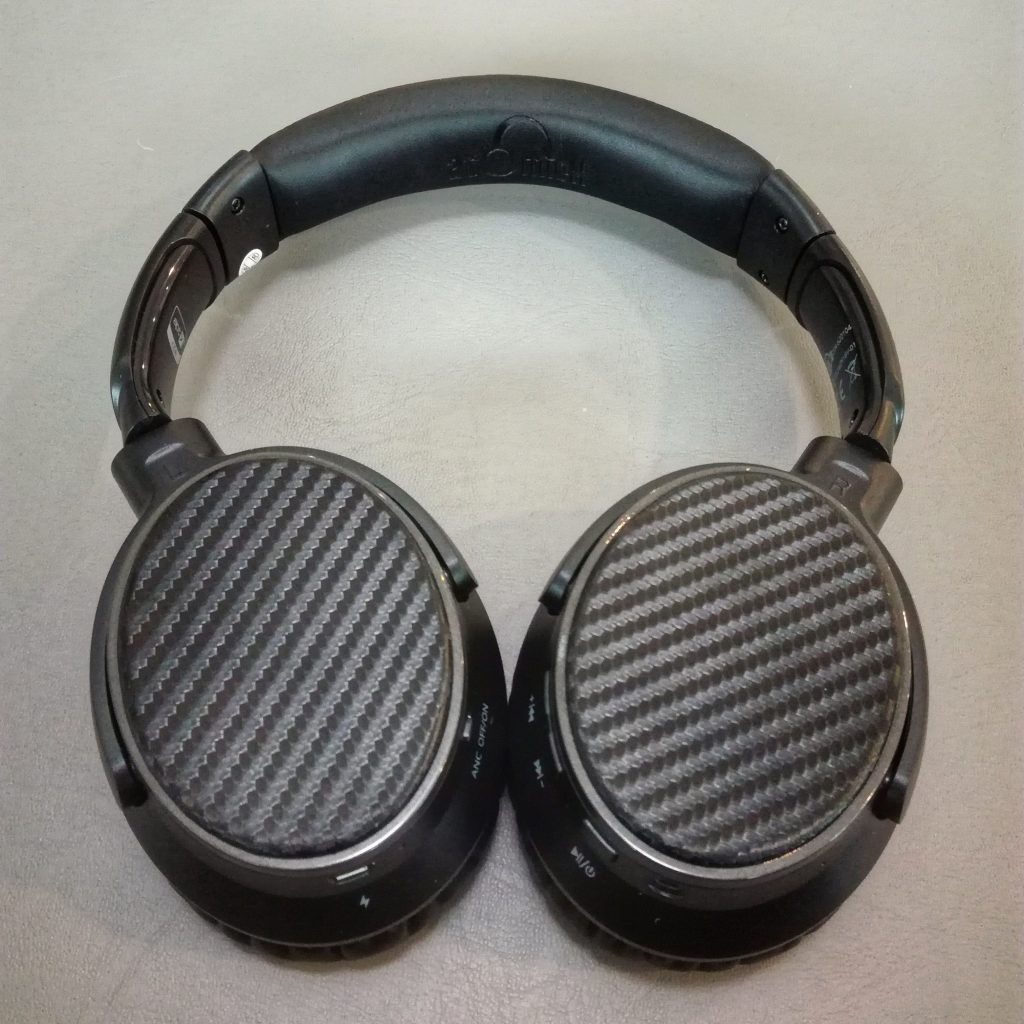 The V201 headphones follow closely the design set by the carrying case, with faux carbon fiber elements on the cups and on the top part of the headband. The rest of the device is made up of plastic.

When you adjust the cups in order to fit your head, you will discover that a metal frame hold the headphones together. There’s also some padding added to the bottom part of the headband and to the inner side of the cups.

On the bottom part of the cups you will find several elements. On the left one, there’s a switch to toggle Active Noise Cancelling. There’s also a microUSB port for charging purposes.

On the right, you will find a power button that doubles as a pause button, plus volume down/previous and volume up/forward buttons. There’s also a 3.5mm plug to connect the included cable. A status red/blue light is also present on both sides.

All of these elements add up to a weight of 210 grams. I haven’t found myself wishing that they were neither lighter nor heavier. They are light enough so that long sessions don’t turn into hell, and they are heavy enough to convey a sense of quality.

Contrary to what some companies are doing, iDeaUSA opted to offer the V201 in black only. Thank you very much, iDeaUSA. Even though I prefer bright colors for some stuff, such as cellphone cases, I would hate to have a bright green thing on top of my head. This device won’t turn heads, that’s for sure, but, in my opinion, that’s how headphones should work.

I’ve been using these headphones basically non-stop for a week and the first day I felt some discomfort on my ears, but the next day it went away. Probably it was just me getting used again to over-ear headphones, which I haven’t used in months. The padding makes a good job here, and the weight means that the discomfort is kept to a minimum.

The whole set just feels very sturdy and strong. I feel like these headphones will serve me well for several years, thanks to a well-designed build and durable materials.

Normally, Bluetooth headphones are not renowned for their audio quality, unless it is a very expensive piece. Also, when headphones add ANC, audio quality tends to suffer in favor of a more pleasant experience through the reduction of ambient noise.

As I previously said, I have some experience with headphones but I am in no way an expert. I use a pair of Apple EarPods for my daily walk to the university, and I am fine with them, even though I know they are not good.

However, it is easy to notice the difference between a pair of crappy earbuds and the V201. I noticed some sounds in Delain’s Here Comes the Vultures that I have never heard in the (probably) 200 times I’ve listened to that song. This happened with several songs, proving that the sound it produces can be refined and detailed.

In case you were wondering, these headphones can get extraordinarily loud. This will obviously make the sound bleed (and annoy people around you in the process), but listening to The Game by Dragonforce on full volume was almost a concert-like experience.

I like when headphones have a pronounced bass, and unfortunately the V201 isn’t the best at this.

I heard several songs through the V201 and my EarPods and there were some cases, such as in Shine by Tolmachevy Sisters (don’t judge, a series of weird events led me there), where I could hear the bass drum more clearly through my EarPods.

Also, in some songs, such as Epica’s Edge of the Blade, which is filled with very prominent hi-hat and crash cymbal sounds, some mild distortion could be heard in these high sounds, especially when I increased the volume.

The situation improved when I turned on Active Noise Cancelling. Then, the perceived sound had more punch to it, with richer bass sound and a more dynamic range. This alleviated slightly my complaints about the sound, so I will keep it on.

Talking about ANC, I must say that it is hit or miss. It reduced the clicking sound of my keyboard and this weird sound that the heater in my room does (or maybe it is the normal sound, it’s just that I’m not used to having heaters in my room, but rather fans), but it couldn’t filter rain, for example. It obviously didn’t do a good job in reducing my flatmates’ voices, but it did reduce them a little.

The V201 headphones support the latest Bluetooth 4.1 standard. Unlike several Bluetooth devices I’ve used, there is no hissing sound, something that is specially noticeable when nothing is playing.

I did experience a couple of interruptions while playing music, but they lasted a couple of tenths of a second.

Pairing the phones to a Huawei Honor 7 Lite (known as Huawei Honor 5C in other markets), a Nomu S10 and a Windows laptop was extremely easy. Just hold the power button for five seconds and the headphones will change to pairing mode. Choose it from the list of Bluetooth devices and you are done.

If you like, you can use the included 3.5 to 3.5mm cable to listen to your favorite tunes. This works exactly as expected, and the sound quality wasn’t either benefitted nor affected by the change of output.

As a bonus, the headphones include a mic, so you can answer calls through them. You accept a call by pressing the power button. This built-in mic gets the job done. Obviously, it is much better to answer your call through your phone, but the mic is there for when you need it.

The headset features a 500mAh battery that can be charged through the included microUSB cable. There’s no charger included, but come on, it is 2017, everyone has one already.

Even though the battery is small, iDeaUSA claims 20 hours of battery life with ANC turned on and 25 turned off. I had ANC turned off almost all the time and I can attest to this fact. I’ve used these headphones on average 8 hours per day and I’ve had to charge them twice in one week.

Charging is another matter, though, and even though iDeaUSA claims two hours battery charging time, I’ve never been able to replicate this. Both times, the battery was charged after a 2.5-hour period. If I manage to get a better time, I will update the article accordingly, but don’t hold your breath.

The AtomicX V201 headphones feature a nice build, responsive controls and good battery life in a nice packaging and a welcoming price. You can use them through the state-of-the-art Bluetooth 4.1 standard or by regular 3.5mm cable. Sound quality could be better, and Active Noise Cancelling can be hit or miss, but the overall experience provided by these headphones is very good.

Considering that you can get them for less than $100 (exactly $89.99 at the time of writing), you get a lot of value for your hard-earned cash. You probably can’t do much better, and definitely can do much worse.

You can get more information about the iDeaUSA AtomicX V201 headphones or buy them from Amazon.