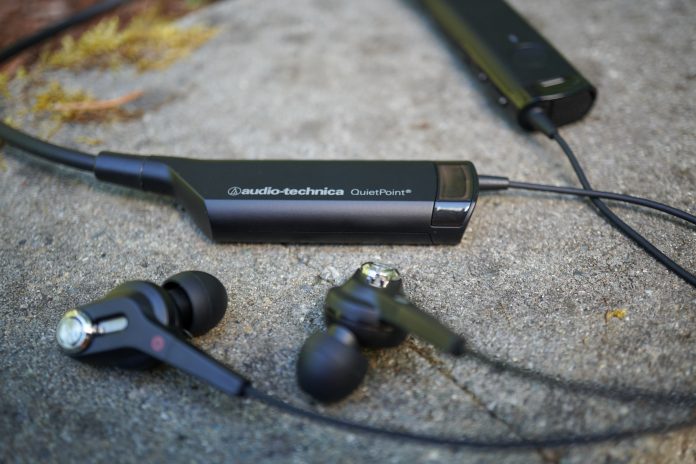 We come by a lot of Bluetooth earbuds here at AndroidGuys, so we appreciate when manufacturers make a valiant effort to standout. This is precisely how our attention got caught in our talks with Audio Technica – renowned Japanese audio manufacturer.

The long-standing company has been keeping up with the times, and one of its latest wireless earbuds, the ATH-ANC40BT, packs quite the spec sheet. 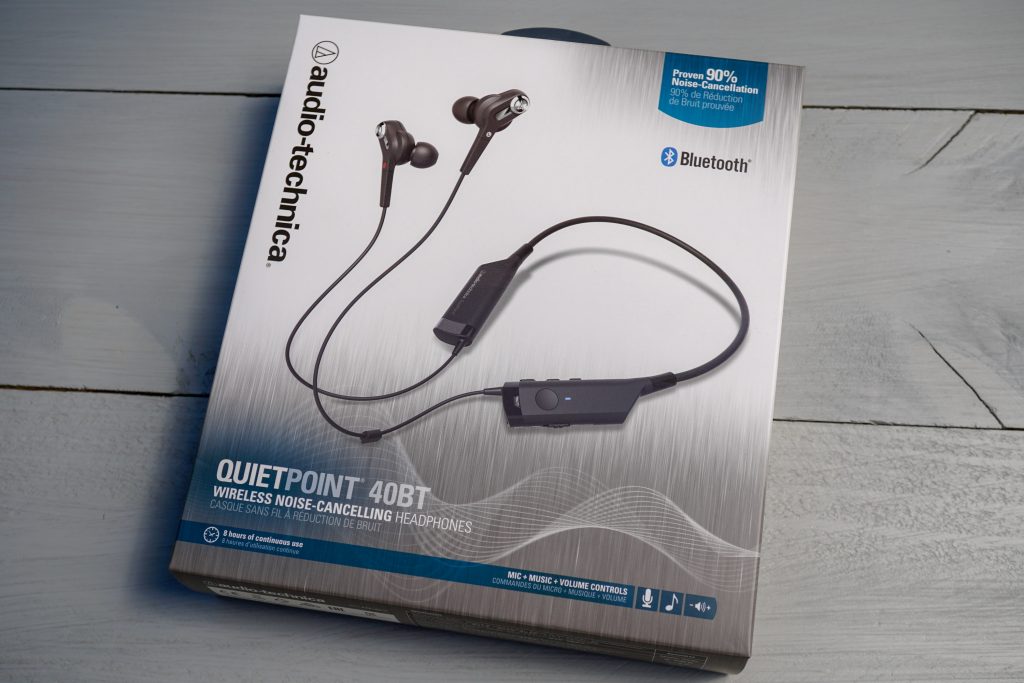 Chiefly, there’s active noise-cancellation (ANC) tech incorporated, which is something we don’t see often in an in-ear headphone. Is the ANC40BT as promising as it sounds? We’ll cover the important details in this review.

Wireless earbuds come in various shapes and sizes, from around-the-neck band to completely wire-free earpiece flavors. The ANC40BT is the former. This may not appeal to everyone, but we imagine that Audio Technica put technology in front of form when making this earbud (we’ll cover its capabilities in the next section).

We’ve seen neckband designs that work really well, such as with LG’s Tone series. However, the ANC40BT very basically put together. The flexible band portion is an averagely thick, rubbery cable, which terminates with sizable plastic compartments at its ends, from where the compact earpieces simply extend via a very thin wire.

It’s a very essential design not just in form but also materials. Everything is constructed from ho-hum-feeling plastic. This isn’t to say that it’s flimsy or won’t hold up, it’s just not different in feeling than a solid $30 pair of earbuds would be. And this is a $120 headphone. We imagine the justification will come when we look at its function and sound quality.

There is a small bit of styling to note on the outward surface of the earpieces. Alongside the inset metal grills (we’re guessing that assists noise-cancellation tech) are circular metal caps. They’re attractively shiny and have Audio-Technica’s logo engraved.

The ANC40BT packs a bit more within than your typical wireless earbud. The common physical controls are present like that of most. That is, a power button with accompanying status LED and three-button playback toggles.

Their locations may seem a little convoluted (all fitted around the left-hand compartment), but its all fairly intuitive to use. The volume up/down buttons are the ones closest to you, and the ANC switch is only an on/off switch. We like there being separate buttons for power/pairing and for play/pausing.

The around-the-neck wear is comfy. This isn’t a compact unit all-together. You’ll really feel the equipment around your head; it doesn’t “disappear” like many alternatives. What really doesn’t help is the earpiece wires. Although they’re thin, they’re stiff, and they butt up right against the left and right side of your chin. There isn’t really anything you can do about it, unless you tape them down onto the neckband.

This also makes the ANC40BT not quite ideal for working out, as the wires rub against your face with head movement. The unit stays in place just fine, so you can work out with them if you wanted to, but we just don’t get the sense they were designed for Sport use (additionally, we don’t see any mention of water resistance).

The ear tip in-canal fit can also be a concern. Even with the largest included tips, we just couldn’t manage to get an appropriate seal. If we could push them in further, maybe, but the considerable stems about the earpieces keeps you from pushing them past a certain point. Despite not having the smallest ear canals, I always manage to find a size that works on other earbuds. But the ANC40BT’s tips are a complete no-go for me.

Fortunately, the ANC system works quite well, and somewhat makes up for the compromised ear tip seal. There’s a stark reduction in ambient noise when you toggle it on. It cleans up the audio a bunch in a noisy environment, excellently isolating the music.

Like most ANC systems, it mostly targets silencing lower-end frequencies. Especially that our incomplete seal means compromised passive isolation, we hear plentiful high frequencies get through.

Overall, the system still works for an appreciably isolated experience. Just don’t expect silent levels like that of the Sony WH-1000MX2 or Bose QC 35 II (to be fair, no earbud with ANC has reached close to this level).

Audio-Technica is a brand that knows what it’s doing when it comes to audio quality. The company has a history for good reason, and holds some beloved classics like the super popular ATH-M50X. And the fact definitely shows with the ANC40BT.

Firstly, it did the appropriate thing for wireless earbuds in this day and age by employing the aptX wireless audio codec. Streaming music with “High” settings results in plentiful and clean details throughout.

One of the most enjoyable parts of the sound is the deep and bodied bass. It has an authoritative presence throughout (maybe a little too strong in the mid-bass for some audiophiles), without being overdone.

The mid-range isn’t as full or open as with higher-end earphones, but overall well-done for this price range. It has a smooth and natural tone, with a hint of airiness. Again, it’s not “forward”, but not a V-shaped sound signature either (more like U-shaped). We like how the upper bass and mids have clear distinction, and can be separately appreciable.

We have the same kind of quality up through the treble. Details come through punchy and clearly (though, not as crisply as you’ll get up the price chain). Extended portions can get slightly lost in the mix. This isn’t unexpected at this price-point.

We like the amount of soundstage width that the treble can utilize. Coupled with the strong bass, you can get that immersive sense that larger headphones achieve.

Regarding the low-level hiss that plagues many like headphones, the ANC40BT has very little. You’ll only notice it in silence or quiet passages of tracks; the music easily drowns it out when it gets going. 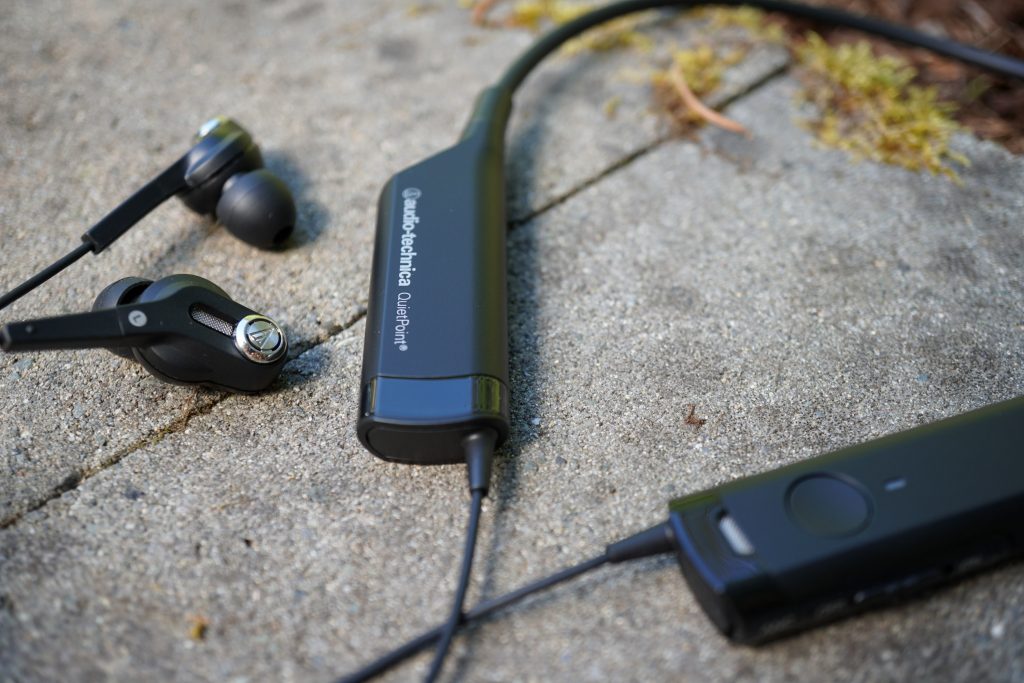 We’re left a bit torn with Audio-Technica’s ANC40BT earbuds. What they clearly have going for them is the great ANC tech and sound quality. But there’s a notable lack of finesse in the design.

The entire unit is quite bulky for a portable wireless earbud, and the wear leaves to be desired. They’re undeniably comfortable (save for the face-butting earpiece wires), and the functions work well.

Our biggest contention was our ability to get a complete in-canal seal. Audio-Technica should re-look at the earpiece/ear tip design, or at least include foam tips in the box. Though, this is a “your mileage may vary” kind of thing. The ear tips may work fine for your canals. If they do, and if you don’t mind the involved design, then the ANC40BT would be a good choice, especially if audio quality is your utmost priority.