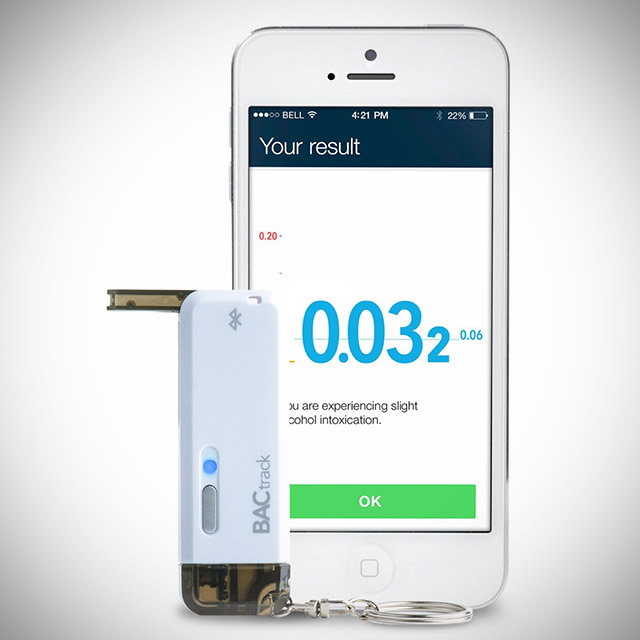 It’s Friday, time to hit the town with friends.  If you’re going to be drinking you might want to consider adding the BACtrack Vio to your keychain.  The BACtrack Vio is one of the smallest personal breathalyzers I have ever seen, it’s just about the same size as a Bic lighter.  The Vio can be added to a keychain or ride in just about any pocket.  When paired with your smartphone, the Vio is a powerful tool that is easy to carry anywhere.

Setting up and using the Vio is a simple matter of downloading the BACtrack app and pairing the device with your smartphone of choice via Bluetooth.  When you’re ready to test your BAC (Blood Alcohol Content), you fold out a tiny tube that you then blow into.  The app gives you directions that are easy to read, understand, then follow.  Even after a few drinks the Vio is easy to use.

After blowing into the Vio you get a reading that is big, bright and full of information.  A clever feature that the BACtrack app offers is something called ZeroLine.  ZeroLine estimates, then tells you what time you should be sober.  I wouldn’t rely on ZeroLine to tell you if you’re able to drive, but it’s useful information none the less.

The BACtrack system really shines when you use the social features.  You can share your your BAC, location and photos with friends who might not be out with you.  This turns the Vio into something that you WANT to use, rather than something that you HAVE to use.  By keeping track of your alcohol consumption you can be safer when you’re out, so any feature that promote use of the Vio is good in my book. 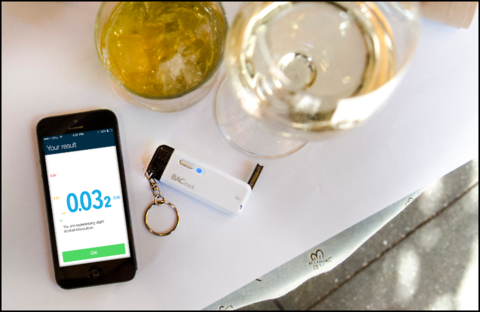 There are a couple negative things to consider before buying your own Vio.  This breathalyzer is not as accurate as others on the market.  I was able to compare the Vio to a portable police issue breathalyzer.  The Vio consistently read several points higher than the professional unit, but the police unit was much bigger.  In the past I had played with personal or mobile breathalyzers and the readings were all over the place.  Not so with the Vio, while it read high, it was at least consistently high.

The only real problem I had when I was testing the Vio was with the app.  Sometimes the app would tell you it was warming up, but then would skip straight to the result page.  Restarting the app fixed the problem, but the same problem would pop up occasionally.  Not a big deal, but it could be something that gets annoying, especially if you’re trying to test yourself while intoxicated.

If you want a personal breathalyzer that is easy to carry the BACtrack Vio would be a great choice, especially for only $49.99.  The social features make this something that is fun to use when out with friends.  The size of the Vio means that it won’t be as accurate as larger units, but that doesn’t mean it isn’t useful.  The Vio could definitely help make a night out with friends more safe, you just need to be aware of the shortcomings.  The police don’t even rely on their mobile breathalyzers for exact readings, so you shouldn’t either.  Just remember that if you are impaired, in anyway, leave the driving to someone sober.

You can buy your own BACtrack Vio here