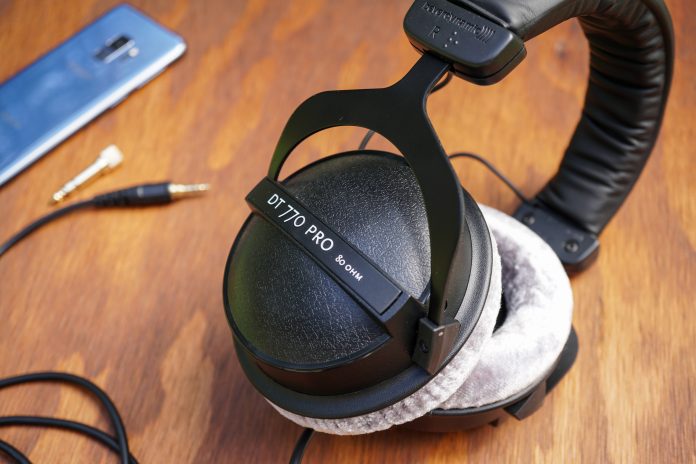 A few weeks ago we looked at one of Beyerdynamic’s answer to the modern wireless trend in headphones, the Aventho Wireless. These on-ears impressed a lot, from their industrial design to their proficient components. But that also got us thinking; with all these new and technologically impressive headphones coming out, are past offerings rendered obsolete? I mean, the basic function of shooting audio into our ears is the same, isn’t it?

So we accepted a review unit of the “old” DT 770 Pro. The “DT” series has been Beyerdynamic’s “value” line, and the 770 Pro is the entry-level model. This also means that it holds the most potential for pushing the bang for your buck. Let’s take a look if it’s still a superb over-ear for the money.

Technically being a lower-end model, we were right in expecting basic design and materials from the DT 770 Pro. This isn’t to say it’s flimsy. Beyerdynamics did the best it could in spite of this. The ear cups have a couple standout elements, like the textured dome and large branding print across the center.

We like the stealthy vibe. The whole facade portrays attractive sophistication rather than flash. That said, there’s no getting around how cheap they feel in-hand. It’s hard plastic all-around, hollow to the tap. We don’t get the sense that they’ll fall apart, it’s just that these days, even headphones at this price-point are upping their build quality.

The headband, on the other hand, is covered in a substantial leather wrap. Touring around, we begin to see that Beyerdynamic poured resources into the headphone’s ergonomics, that is, the bits that make contact with the head. There’s generous cushioning on the headband’s underside and on the large ear pads.

Speaking of which, we don’t often see a fabric wrap on ear pads (at least, these days). Most headphone manufacturers opt for some variation of leather. The DT 770 Pro’s ear pads feel as nice on the head as they appear to. However, we’re not confident that they’ll hold up to grime over time nearly as well as leather pads would. 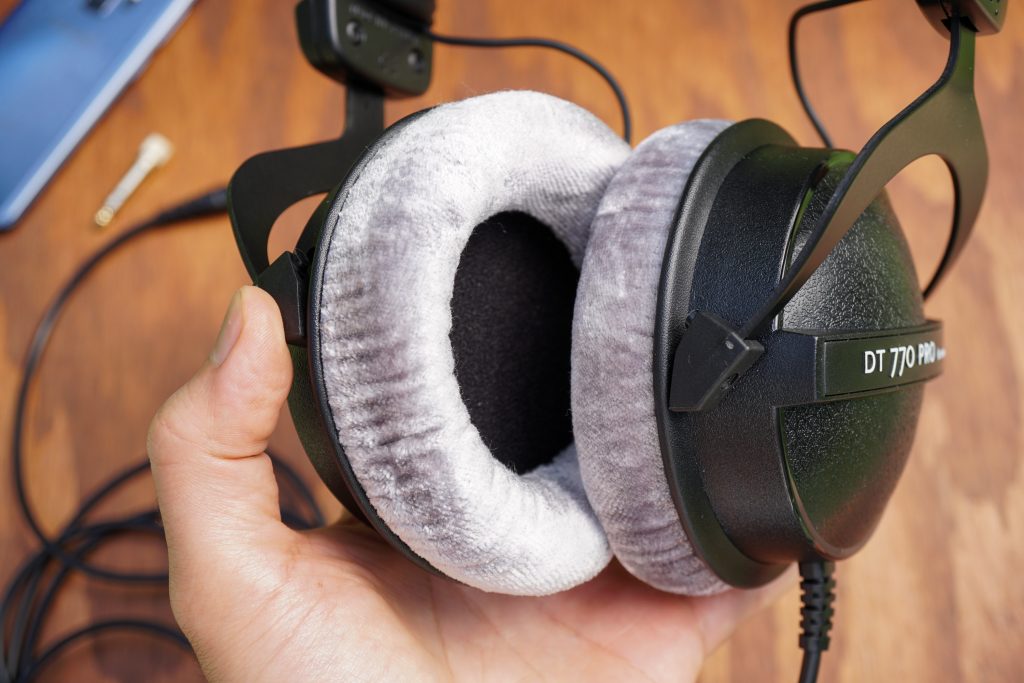 The DT 770 Pro’s ear pads are larger than the average bear. Coupled with the soft cushioning, you can guess that comfort is top-notch. It almost feels like your head is sandwiched between pillows. The enveloping wear also means that sound isolation is above average – a welcomed benefit considering that there’s no fancy active noise cancellation of the sort.

But a resulting disadvantage is that the headphones aren’t mindful of portability, like with many of today’s modern alternatives. The headband doesn’t have any kind of hinge that allows the footprint to decrease. What’s more, the large ear cups have limited degree of freedom. They can pitch a tad, and rotate even less – so no rotation that can flatten the profile to a more travel-friendly form. 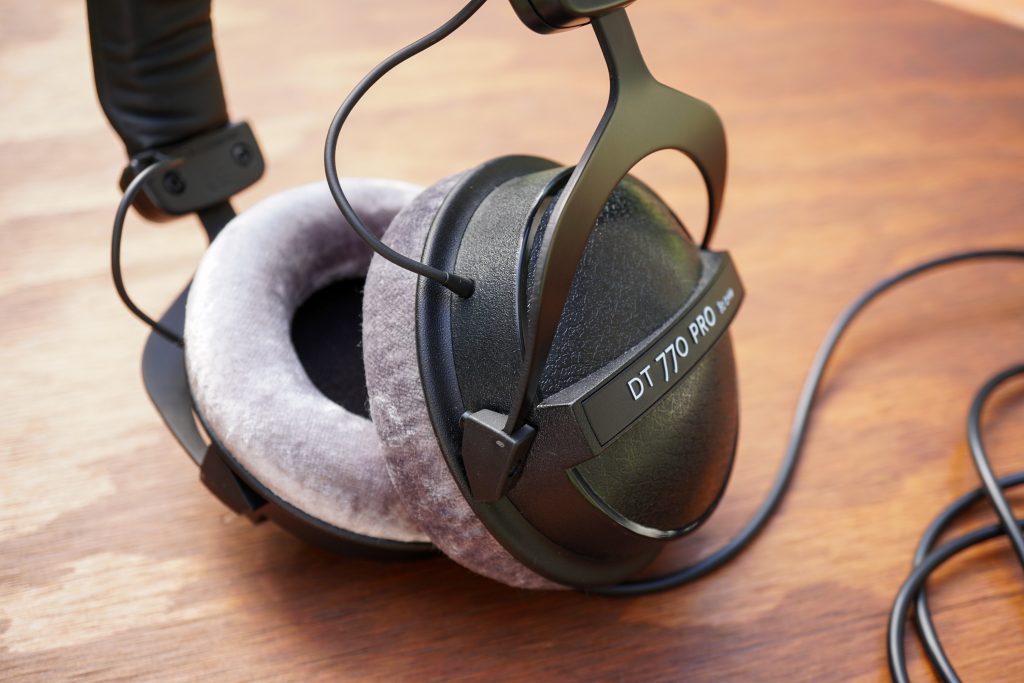 The packaging is likewise basic. Apart from the headphones and manual, you’re just given a 1/4″ jack adapter (being that these are aimed at the “Pro” level) and a thin (somewhat cheap feeling) drawstring carrying bag.

These things are fine considering this is an “entry-level” model of the series, which we figure Beyerdynamic dumps most of the resources to the headphone’s design and sound. You also won’t find anything exciting on the cable front, like the ability to detach and switch cables.

Fortunately, the DT 770’s cable is sturdily made. It has a quality thickness and rubbery sheathing. The “Pro” exemplification is also seen in the cable length, close to a whopping 10 feet.

Being an “entry level” model, we were expecting the DT 770 Pro to make up for its minimal exterior with great sound quality. This notion was asserted by the exceptional reviews that the headphone has racked. Suffice to say, it doesn’t disappoint.

The first thing we want to point out with that there’s multiple impedance versions of the DT 770 Pro, from a low 32 ohms all the way to 250 ohms, to suit the differing power output of source equipment. Despite the lower end price, this is still built like a “Pro” headphone. Beyerdynamic lent us the middle-ground 80 ohms variant. This is still driveable via a smartphone, but note that if you want more volume headroom, then the 32 ohms version may be the one for you.

We really enjoyed the bass response of the DT 770 Pro. It has a fantastic balance to it, juggling power with finesse. It’s a clean articulation that’s notably bold but stays within its confines. This means excellent separation with a mid-range that is similarly potent. The entire first half of the spectrum is really well done. Where ever the track dictates, that range has enough authority to shine and grab the user’s attention. What’s more, the reproduction is skillfully an open and airy one. You get a perceived around-the-head fullness that, while not to the level of open-back headphones, is above-average for a closed-back.

Though, the mid-range isn’t perfect. You’ll get more clarity up the price chain. Particularly, when tracks get busy, instruments don’t have the cleanest distinction. Elements aren’t necessarily “muddy”, but it’s just not that crystal clear detail that analytical listeners strive for. We’d also expect more openness in this region, especially since this quality is let on by the other ranges. Don’t get us wrong, the mids are far from a compressed, in-the-head reproduction. Vocals have a natural, airy quality, and the dynamics have some dimensional play. It’s just that, overall, the region isn’t fully taken advantage of in the large space that the headphones can simulate.

The treble, on the other hand, is excellently captured, both in quality and dynamics. The DT 770 Pro can not only retrieve crisp, higher-end details, but it’s delivered in a skillful way. Instruments like cymbals sport a nice clash that extend notably widely (creating a pleasing sense of depth as sounds can echo through the space). This is the kind of caliber we’d want throughout the entire spectrum – perhaps what you can expect from Beyerdynamic’s higher-end DT models. 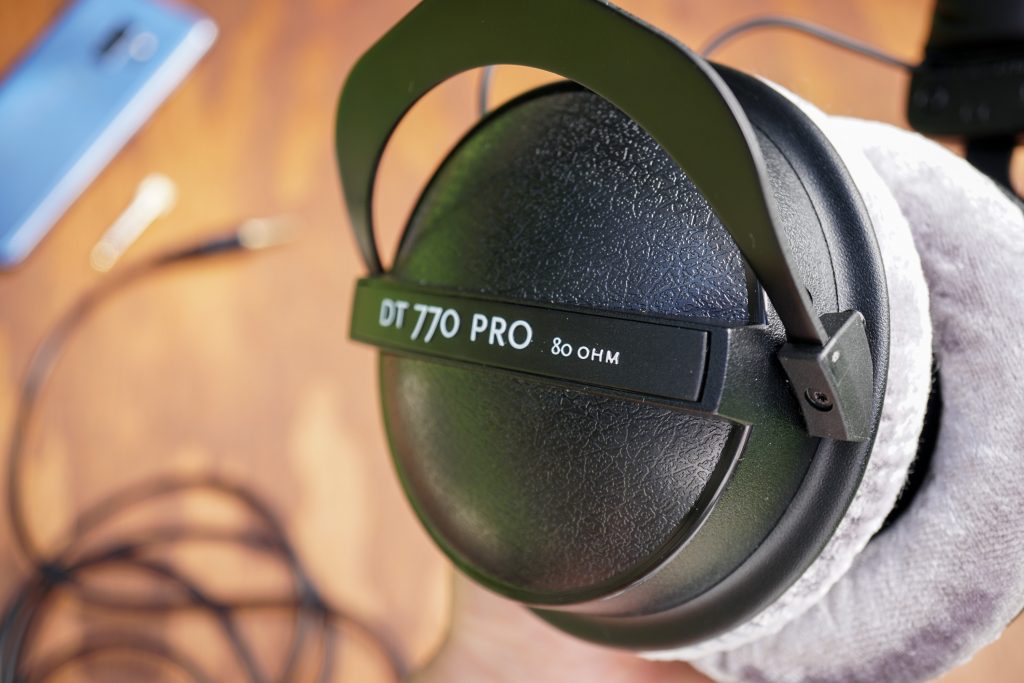 So is the DT 770 Pro still worth it for the price these days? The sound quality tilts the pendulum towards “Yes”, in our opinion. Many modern headphones offer more features and better materials for the money, which put up quite a fight against the very basic DT 770 Pro. But the same can’t generally be said for sound quality. If you don’t have a critical need for portability and want “Pro” sound that can be driven by a smartphone, then we think the DT 770 Pro should be a serious consideration.