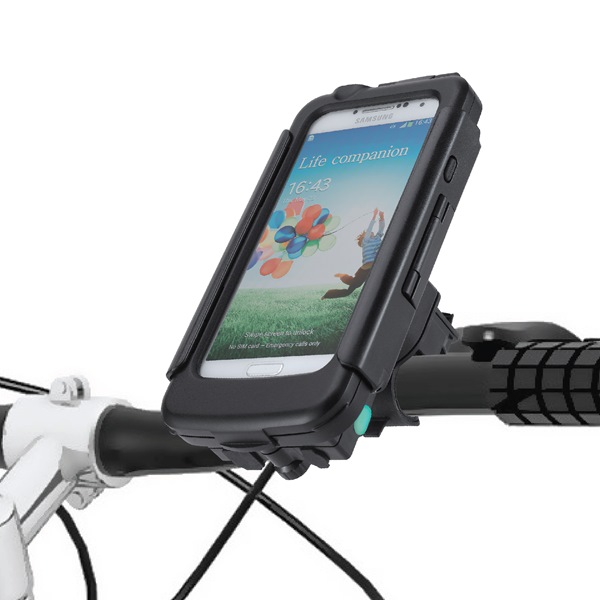 Don’t look now, but we’re just about out of the winter and finally into warmer weather. With the friendlier temperatures comes our favorite outdoor activities, such as biking.

I love nothing more than to toss my handset into a bag and put in some miles on the mountain bike. Very few things beat pairing some Bluetooth headphones with my smartphone and killing a few hours. The problem I run into, however, is that it’s fairly easy to deplete the battery if I’m out for more than a few hours. Between music, GPS tracking, and the occasional message, I often finish the ride with less than desirable remaining battery life. 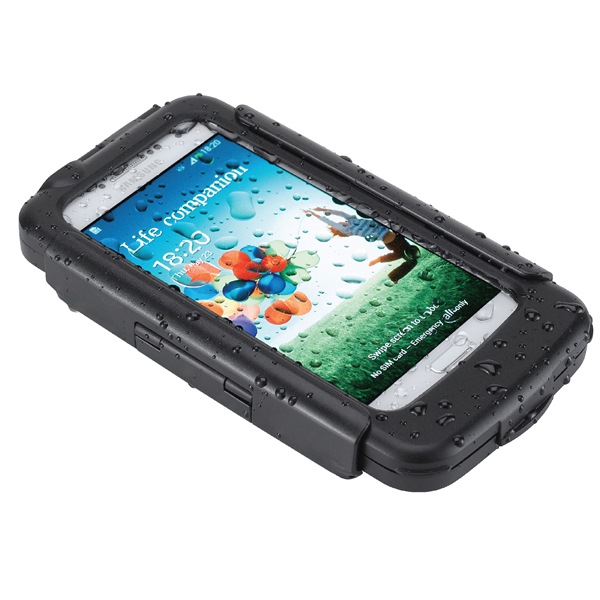 I found a solution that I like quite well in the BikeConsole Power Plus. Available for multiple device types, I spent time playing with the Galaxy S4 version.

In essence, this is an extended battery pack, protective carry case, and bike mount kit. Not only does it allow you to see your device, it’s also charging it while you’re out and about. And, thanks to its kickstand and cutout for headphones, it’s a handy device off of the bike as well. Bonus points are awarded for the exposed camera port which lets me pull of the Galaxy S4 and snap some photos. Just know this isn’t some sleek designer case that’s going to look sexy in public.

One of the other details I like most about the Power Plus is that it is waterproof. While the battery pack itself cannot be submerged, the case is able to take a rainstorm without breaking a sweat.

The clip-on battery pack is rated at 2800mAh which means it essentially doubles your handset’s juice. No more worry about wrapping up a ride with like 30% of your battery to get you through the rest of the day.

The whole unit comes together quite easily and feels very snug when in place. Thanks to its double locking mechanism, the phone never feels like it’s going to fall off the handlebars. I’ve really come to like the Power Plus in that it brings my phone out in front of me again. Rather than keeping it in a backpack or bag, I can see the phone and interact with it much quicker.

I shot a short video outlining the process of installation but found that the official clip told the story better.

You can purchase the BikeConsole Power Plus for your Samsung Galaxy S4 for $89.99. That price is a little steeper than I’d like, and would recommend something closer to $75 for the bundle. I’ve checked Amazon and found it listing for as low as $49.99 through various retailers. If you can get one of these for that price then I say hop all over it.