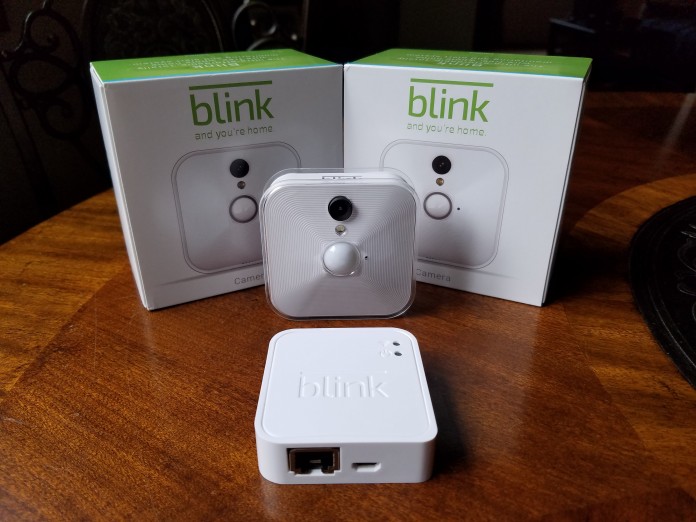 I always love to see different ways in which our mobile devices can benefit us. Web-based products and services have taken off in tadum with mobile capabilities in various areas over the past few years. One those is home monitoring.

Historically, home monitoring has involved expensive equipment and wires, but that’s now changed. Everything is going wireless and more portable, and it’s costing less to do so. Immedia is one company that set to capitalize on this movement and provide a home monitoring system that is compact and affordable, called Blink. 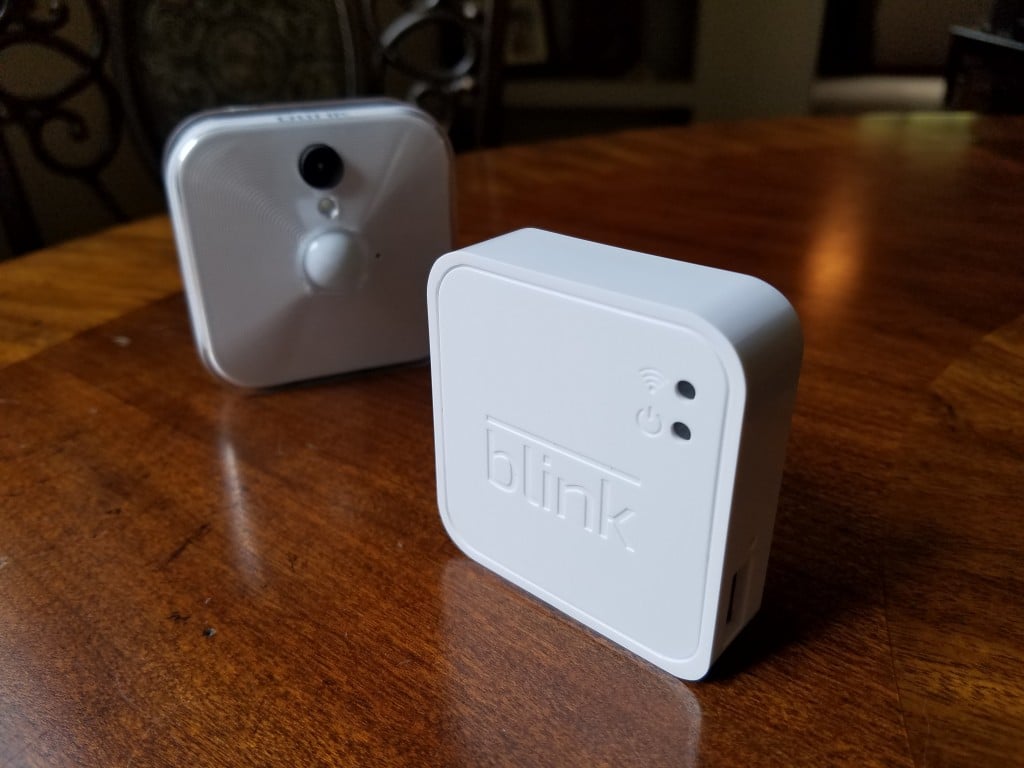 When I opened the box, I was surprised how compact this camera system is. The square-shaped camera unit fits in the palm of your hand. There are clear, plastic bummers on the sides that round out the corners and I imagine provide some protection if the device was dropped. It also helps keep it stable when you stand it up. 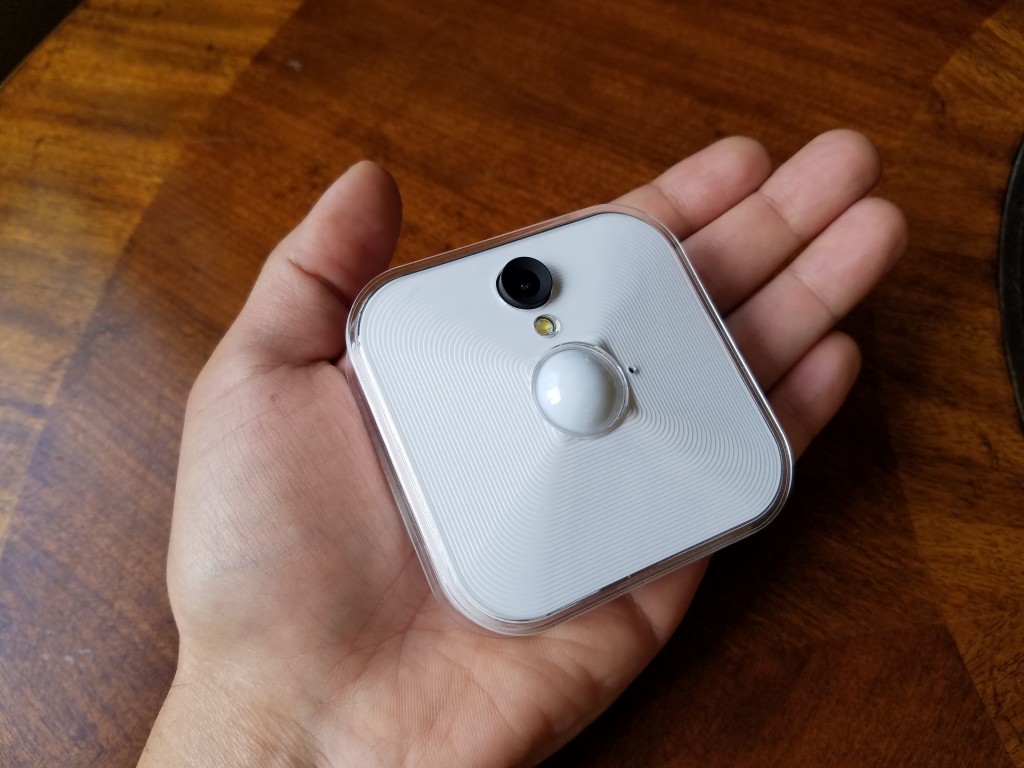 Actually, the whole unit is constructed from a lightweight, hard plastic that feels somewhat cheap (i.e. hollow response when you tap on it). But considering that this is an indoor camera system that you aren’t gonna roughen up, and the focus on affordability, it makes sense.

The hardware features are pretty simple. On the front, you’ll find the lens, an infrared LED (for night capture), motion sensor (that white dome on the center), and a blue status LED. Turn it over and there’s a circular pad to mount the included stand and a microUSB port (for future software updates). The back pops off with a switch on the side for access to the battery compartment. In order to be wireless, the camera uses two AA batteries (included).

The whole system is brought together by Blink’s required Sync Module. It’s slightly smaller than the camera unit and is also constructed from hard, white plastic. The module connects to your home’s WiFi, so LEDs on the top show the signal and power statuses. On the sides you’ll find an optional ethernet port, microUSB port (for power), and full USB port. Blink includes an AC adapter and microUSB-to-USB cable. 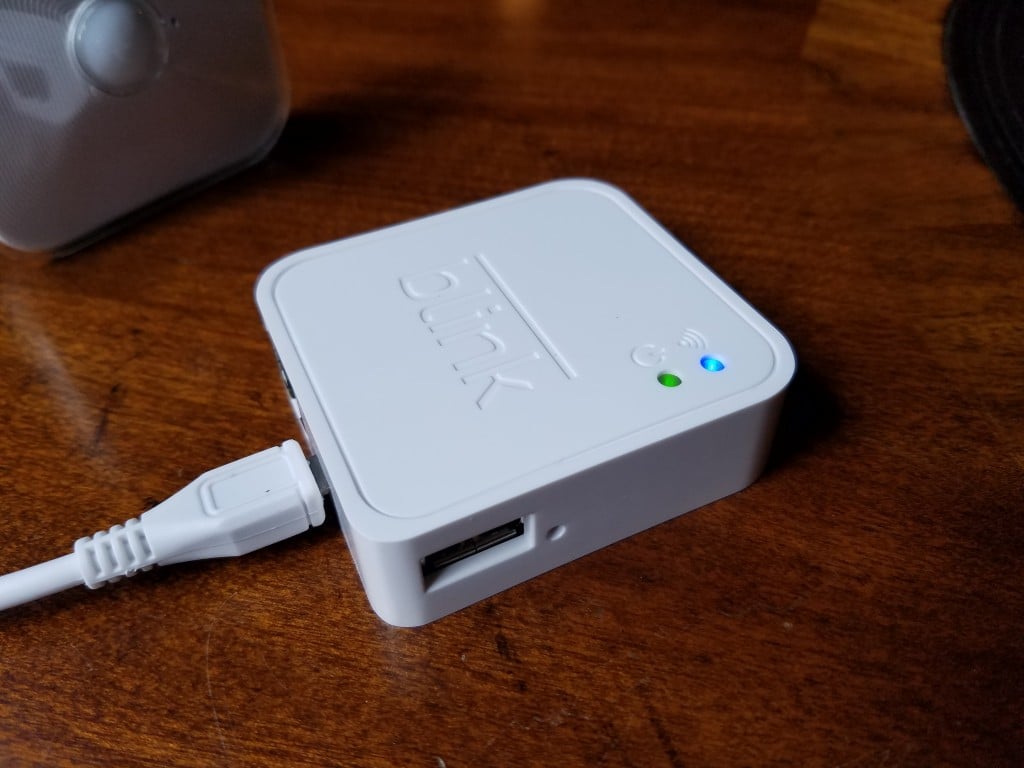 It’s fortunately simple to get up and running. The system is controlled via the Blink app, so you must install it first. Blink requires that you create an account with them, because the media is managed on Blink’s cloud servers. However, a future update will allow you to store the media on a flash drive (that’s why there’s a USB port on the Sync Module).

The app will prompt you to plug in the Sync Module and connect it to your WiFi network. The last step is then to pair the camera module(s). The app asks for the camera’s unique serial number, and that’s it! You can always add more cameras and the app will manage them. Blink sells packages with different numbers of included cameras, or you can purchase them separately as an add-on in the future.

I’m glad that Blink made the system easy to use. As soon as the camera is in place, it is in low-power mode with the motion detector active. When movement occurs, the blue LED on the front turns on and the camera starts recording. Within a few seconds, the app shoots you a notification that something is happening. Tap it and you’ll be taken to the recording. Pretty neat. The camera’s battery is said to last a year, but of course, that depends on its activity.

The image quality is decent, but don’t expect smartphone-level performance. It definitely gets the job done, and I appreciate how the wide-angle lens (110 degrees) gets a lot in the shot. The capture resolution is 720p.

It’s great that the camera still works in the dark. Blink uses an LED illuminator and a proprietary lens to allow you to see what’s going on, despite a reduction in resolution (grainier image).

By default, the camera records in 5 second burst at a time, but that can be changed in the app’s settings. We’ll talk about the app’s interface and settings next.

Blink’s app software is really user friendly. On the main screen, you’ll see the list of cameras you have linked (you assign a view to each when they are placed, so you can visually see which camera belongs to which area). You can jump into the live feed of any camera at any time or access the list of recordings. One nice thing is that you can share the clip via email or upload upload to your Drive account.

There’s not that much going via left-hand slide panel. Under Manage System you can check an activity log that lists what cameras were active and when. 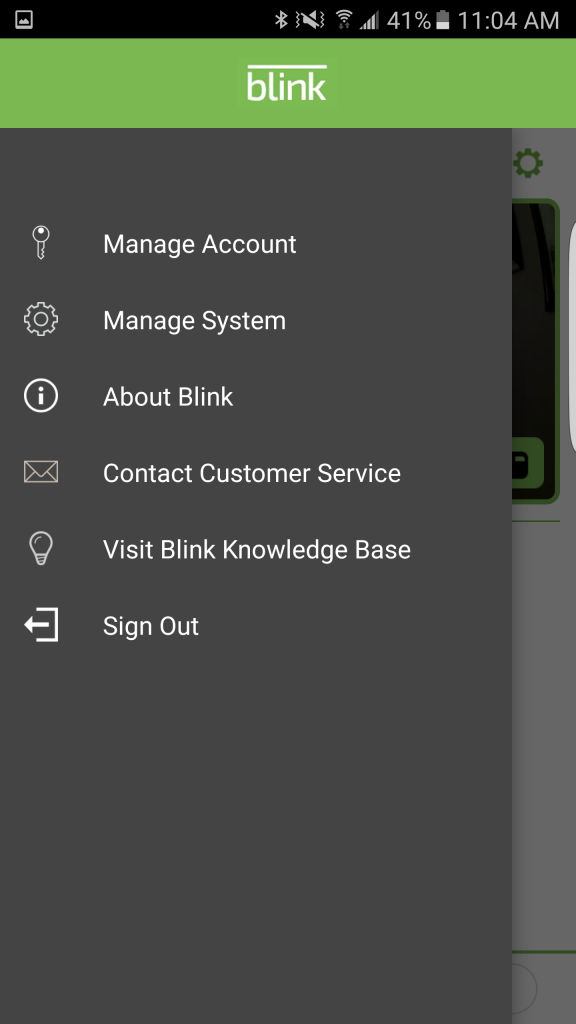 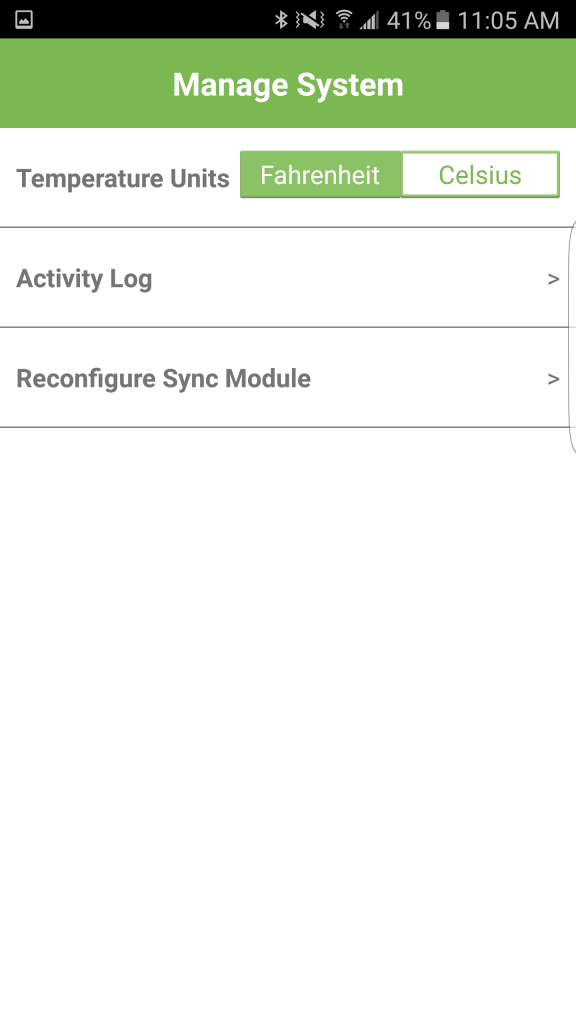 Each camera has its own on/off switch and settings. You’re able to modify the camera’s response, like clip length (max is 10 seconds at a time) or the delay between recordings. 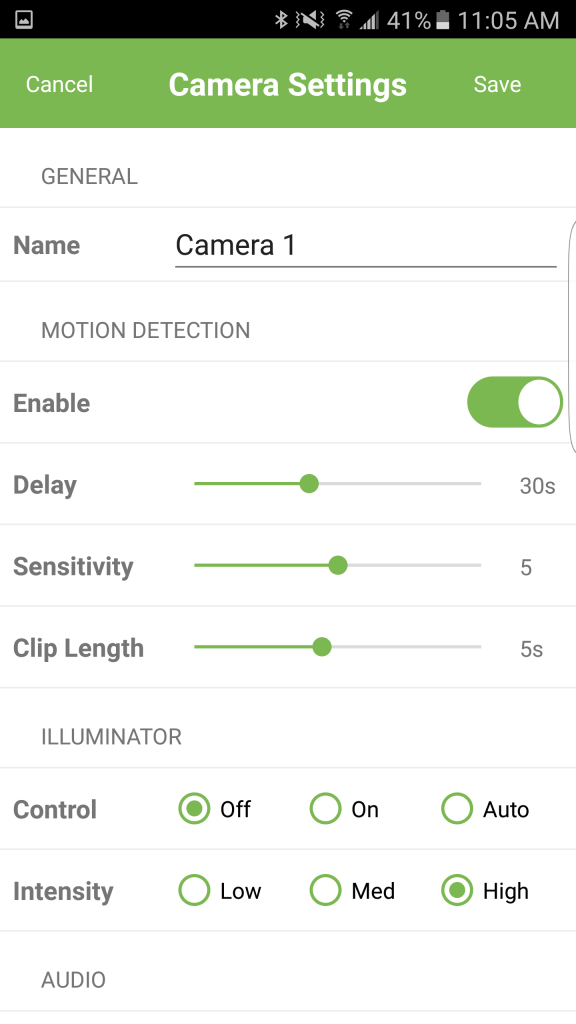 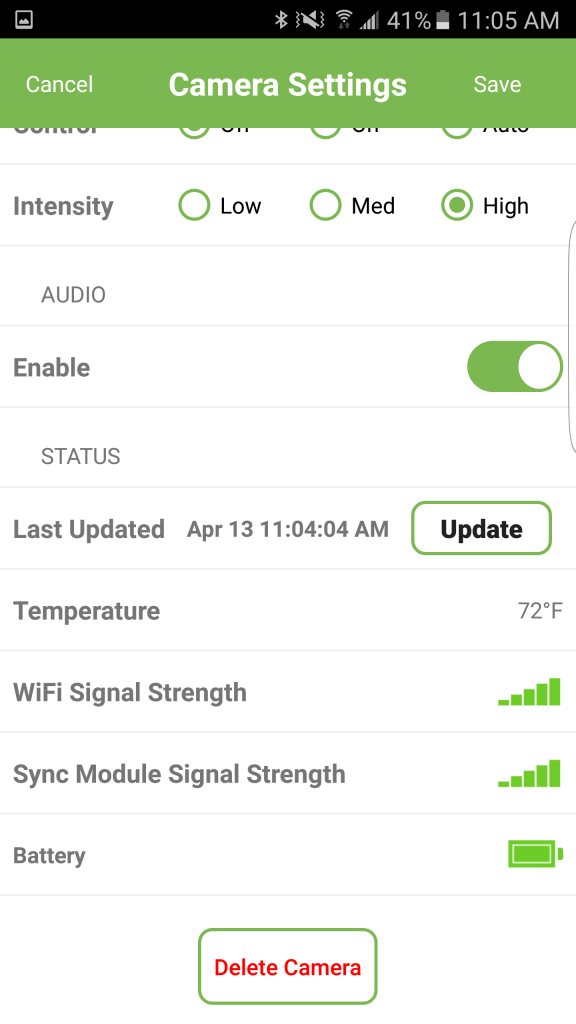 You’ll also see some information like the battery level, WiFi signal, and the camera can even report the ambient temperature. A future update promises alerts based on a change in temperature, as well as an auto aim/disarm ability (based on scheduling or your location) and an alert when the WiFi or battery goes out. It would’ve been nice if these features where in place at launch, as we never know when promises will come through.

I would say the Blink system accomplished its mission. It was very easy to set up and works as advertised. You will find more robust and better quality home monitoring equipment out there, but it will cost more time and money. That depends on the situation, but if you just need something that works and is no frills, then Blink is a great option.

The pricing depends on how many cameras you need. The base option, with one camera and sync module (required), is $99. It then goes all the way to $299 for five cameras. If you wish to tack on another camera in the future, it’s $60 for each.