For better or for worse, the Pixel Slate is one of the premier Chromebooks that you can get. There is plenty to appreciate about it, including the fact that it comes from Google directly.Then again, performance can be hit or miss.

If you are trying to sit down and get some work done with a Pixel Slate, you could attach a standalone keyboard and get a tablet stand. That is if you want to be productive. But why do that when the Brydge G-Type is available?

Brydge has been focused on iPad keyboards over the years but has shifted to both the Pixel Slate and Surface products. What sets Brydge apart from the competition is that this keyboard can make your Pixel Slate feel more like a laptop. Whether that’s a feeling that you want is up to. 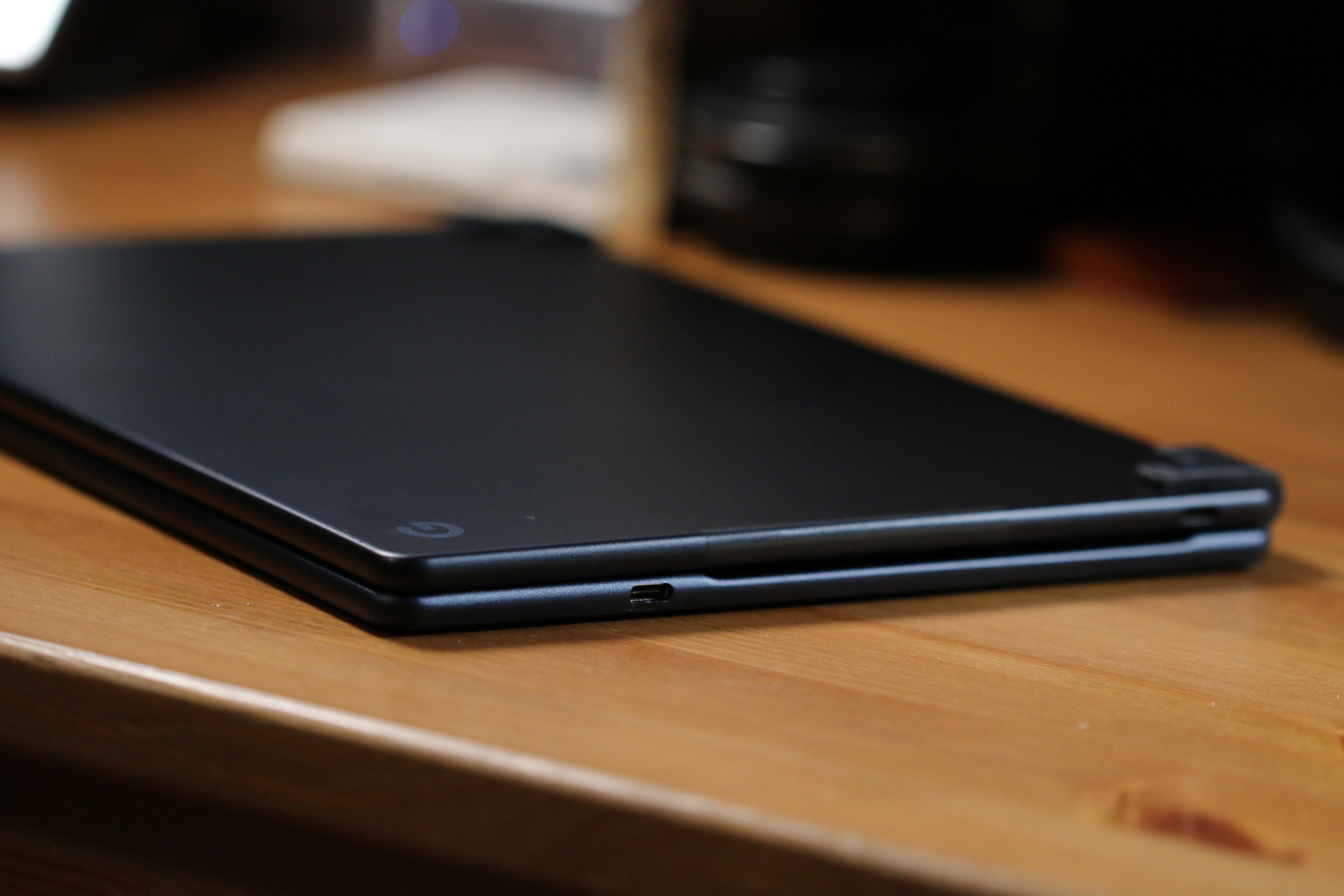 As soon as you take the G-Type out of the box, you’ll notice the first potential “hindrance”,  the weight. This keyboard weighs in at 1.54 pounds, which is quite hefty and a little bit heavier than Google’s Pixel Slate Keyboard (1.1 pounds). The reason for this is because you basically just purchased a slab of aluminum with a trackpad, keys, and Bluetooth capabilities.

At the top, you’ll find two hinges, which are protected by a couple of rubber feet. This is where you’ll slide your Slate in to provide that laptop experience. These hinges fold back to 180-degrees, letting you lay the Slate flat on your desk or table.

With these hinges and the rubber feet, you can easily take your Slate out and sit on the couch. But the other added benefit is to flip the Slate around, put it back in the hinges, and fold it back. That way, you’ll keep the keyboard and Slate together all the time. But with how heavy the G-Type is, you’ll probably just want to take the Slate and leave the keyboard behind. 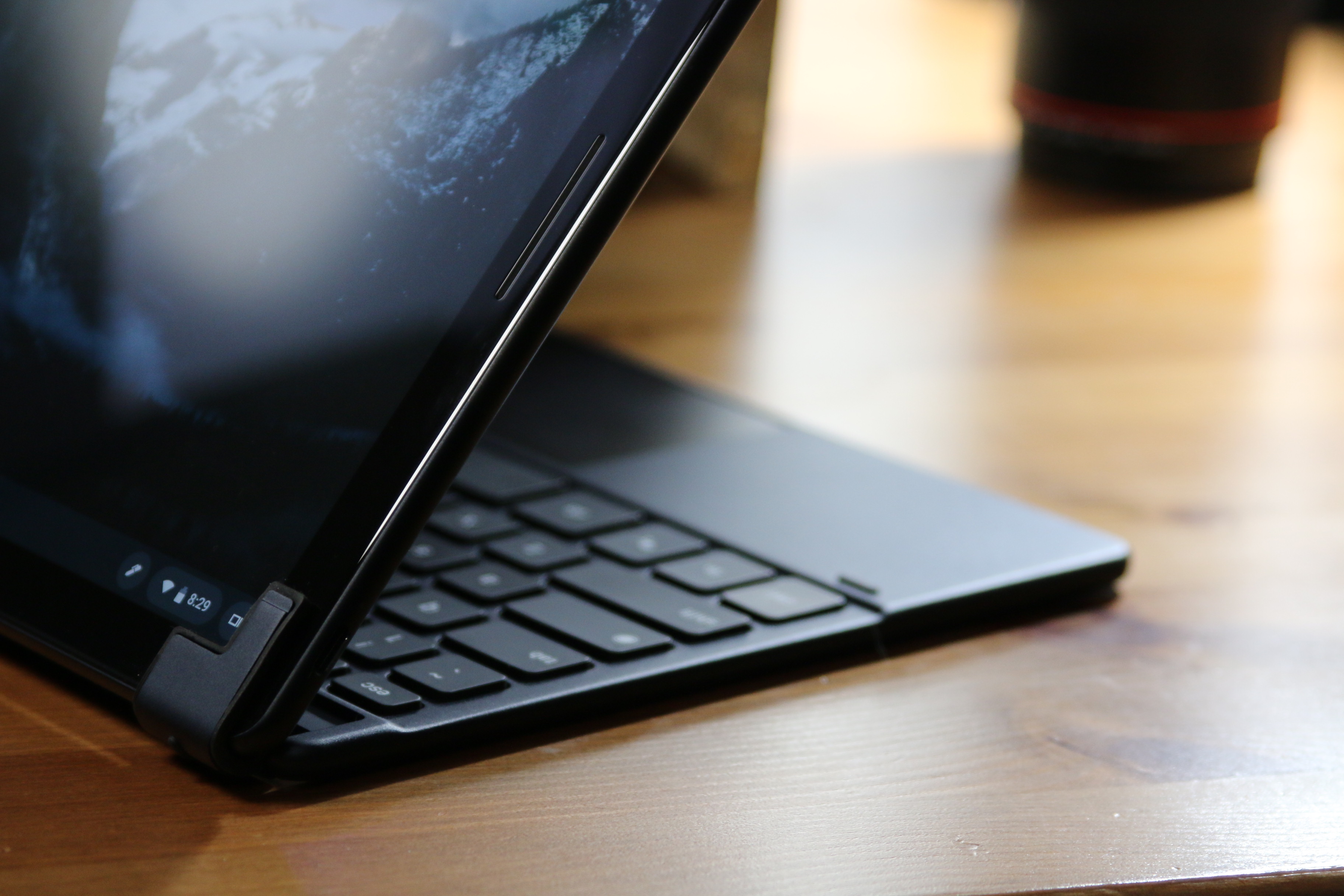 As for the keys, there’s a function row at the top, complete with buttons for the following:

At the bottom of the keyboard, Brydge threw in an added bonus for Slate owners. You’ll have a dedicated Google Assistant key on the left side, and placed between the ALT and FN keys. This is a quick way to activate Assistant whenever you need to, and regardless of what you’re doing. 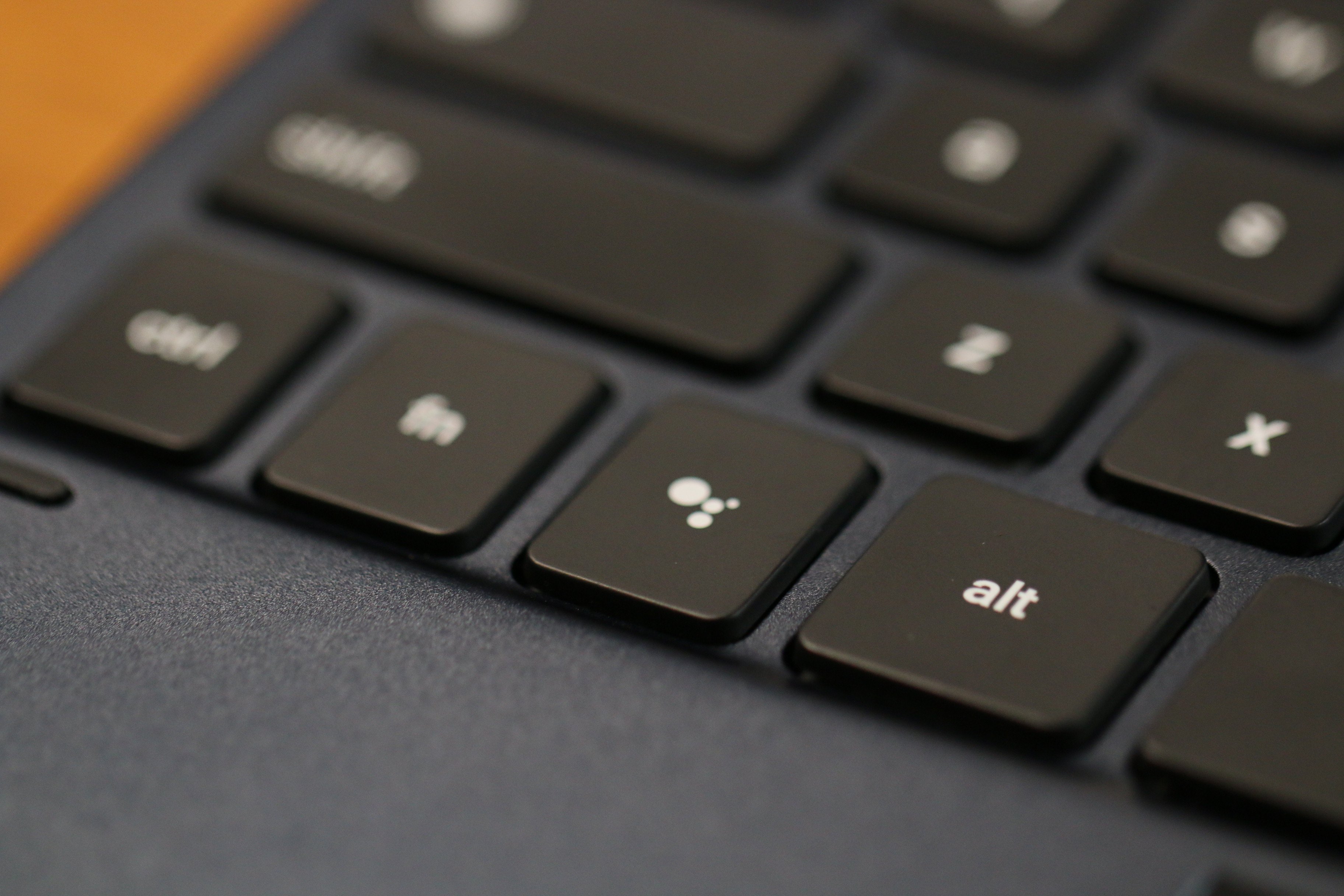 You’ll also get the added benefit of having backlit keys. Even for a touch typist, having backlit keys is extremely convenient, especially if you have a knack for working late into the night or if you get started before the rooster’s crow.

Around the edges of the G-Type, you won’t find much else other than the blue aluminum. That is, except for the right side, where the palm rest begins. There’s a USB-C charging port, so that you can keep your G-Type juiced up.

Read more: How to properly powerwash your Chrome OS device

That may not actually be too much of an issue, as Brydge claims this keyboard will last for up to 6 months before you’ll need to recharge it. The company does put a slight disclaimer that that projection is with just two hours of usage a day. So your mileage may vary.

Finally, there’s a nice trackpad at the bottom of the keyboard. It’s oversized compared to others that we’ve seen, but for someone with larger hands, it just kind of fits nicely in between my hands while typing.

Alright, so we’ve got the design and “specs” out of the way, but how does the G-Type perform in “real-world” usage? I have to say, as someone who types all day and all night, the Brydge G-Type has been a dream.

Some might say that I have a keyboard addiction (to go along with my headphone addiction), so needless to say I’ve tried quite a few keyboards. There’s just something about the feedback with these keys that make me feel like I’m typing on the 2015 MacBook Pro. 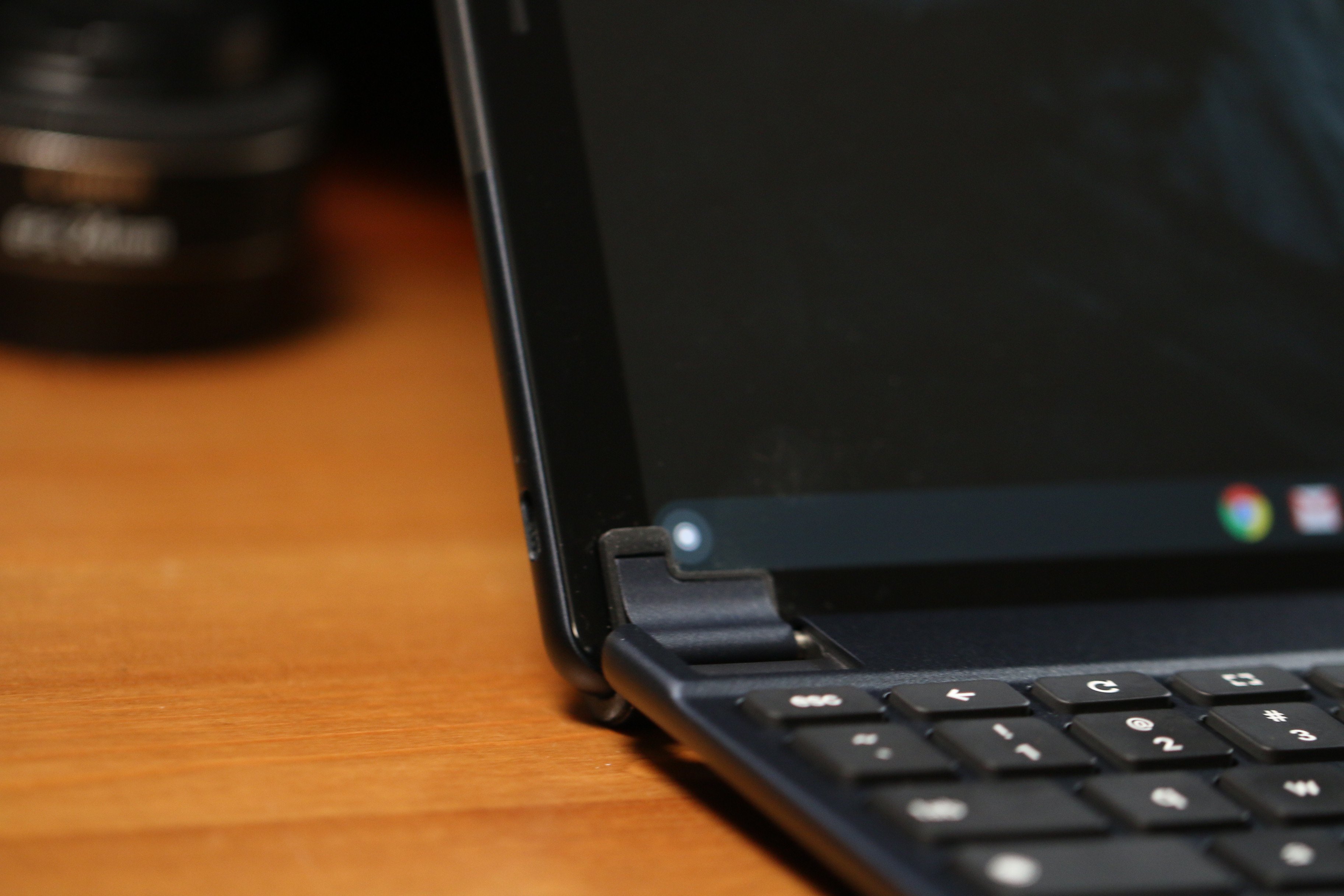 The backlit keys are raised, every click feels smooth, but they aren’t too high where my fingertips get caught moving quickly from key to key. The trackpad, on the other hand, is a point of frustration.

For some reason, companies other than Apple can’t seem to get the trackpad down pat. The G-Type keyboard is just a giant button, and it feels like a button that has something stuck underneath it. Oftentimes, I’ll try to click down on the trackpad, be unable to do so, and end up just tapping it instead, which works just fine.

But when I want to push down and click on the trackpad, I want it to react properly. And it just doesn’t, disappointingly. All other functions of the trackpad work just fine, including the scrolling gestures and just moving around as a whole.

Perhaps the best aspect of the G-Type, outside of the keyboard itself, goes back to those hinges. This gives you a free range of motion, allowing you to set the display at any angle, and not be hindered by the limitations from Google’s Slate Keyboard.

I have also found no major issues with the fact that it uses Bluetooth instead of the smart connector like the Slate Keyboard. There is a slight delay when tapping a key to wake the G-Type Keyboard, but that’s to be expected. And it doesn’t really hinder the experience unless you are in a rush and need to type something quick.

Should you get the G-Type or the Slate Keyboard? 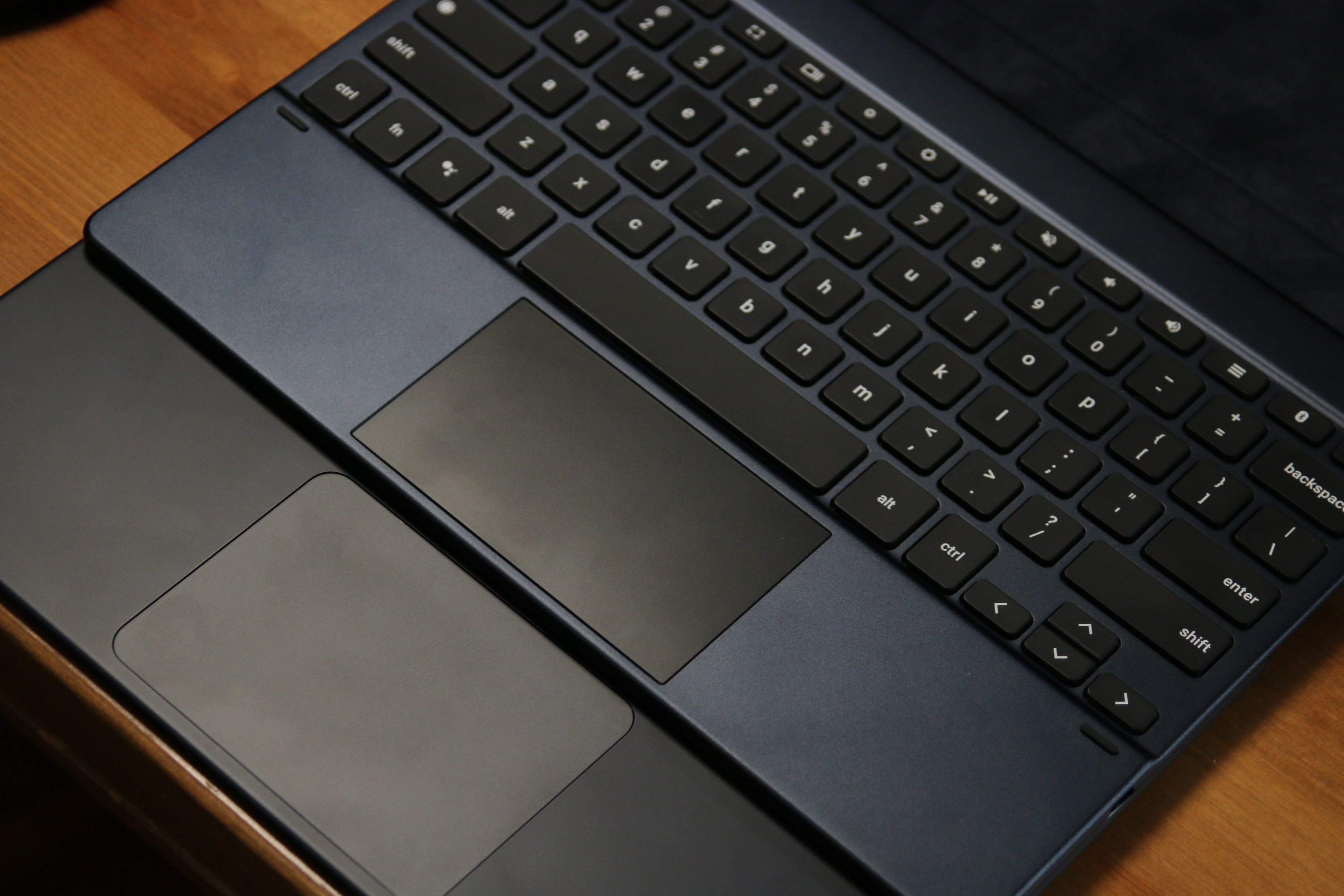 I’ve used both the Slate Keyboard and the G-Type, but ended up primarily sticking with Brydge’s keyboard. The keys feel better, the backlighting is a nice added bonus, and I can deal with the semi-annoying trackpad. I mean, there’s a screen that I can touch if I really don’t want to finesse the trackpad into working properly 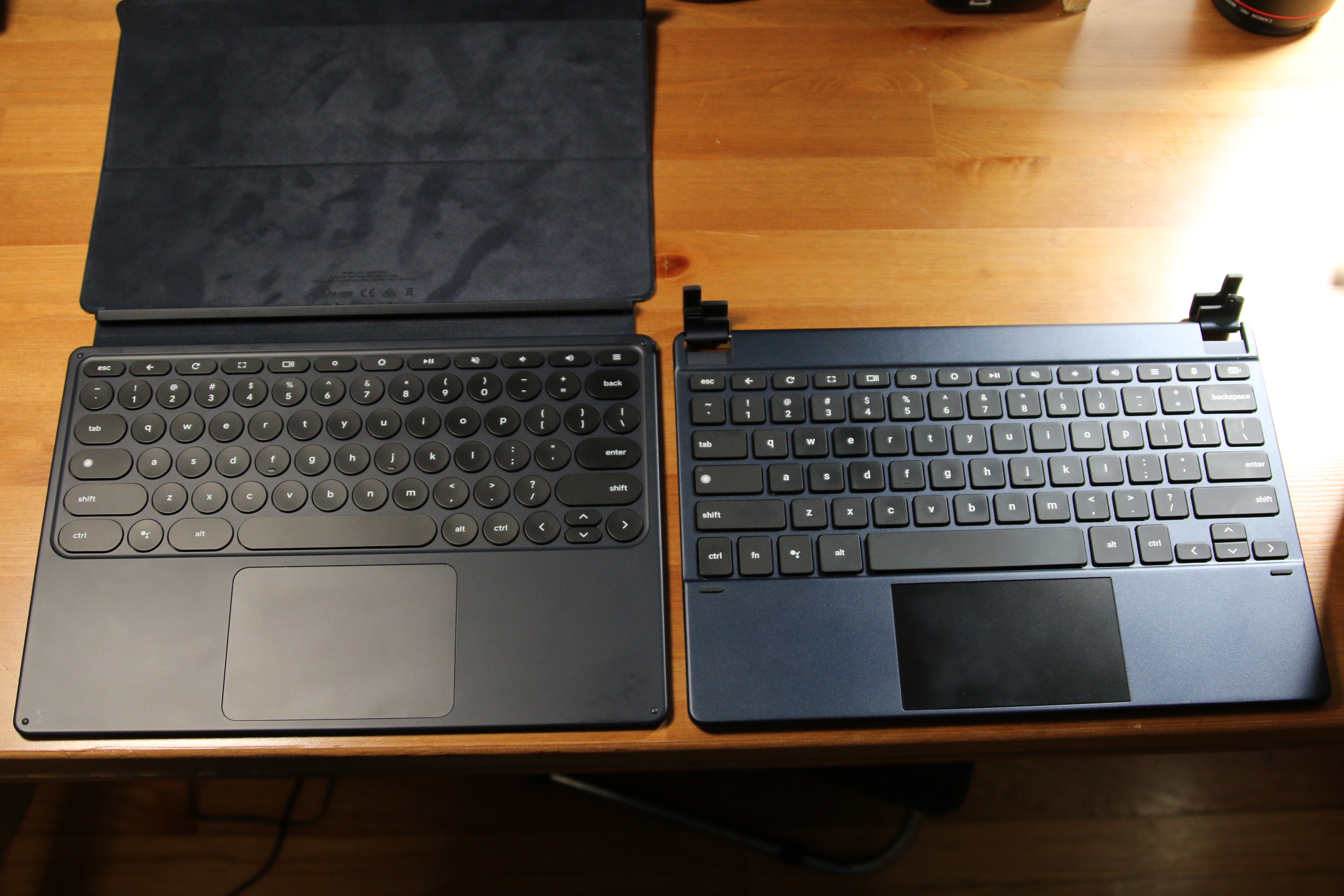 The decision to use Bluetooth is not a problem, and the hinges add some extra functionality if you want it. All of this is to say that if you don’t care about Bluetooth or the weight, get the G-Type. The Slate Keyboard works just fine, but if typing is the name of the game, then Brydge is the way to go. 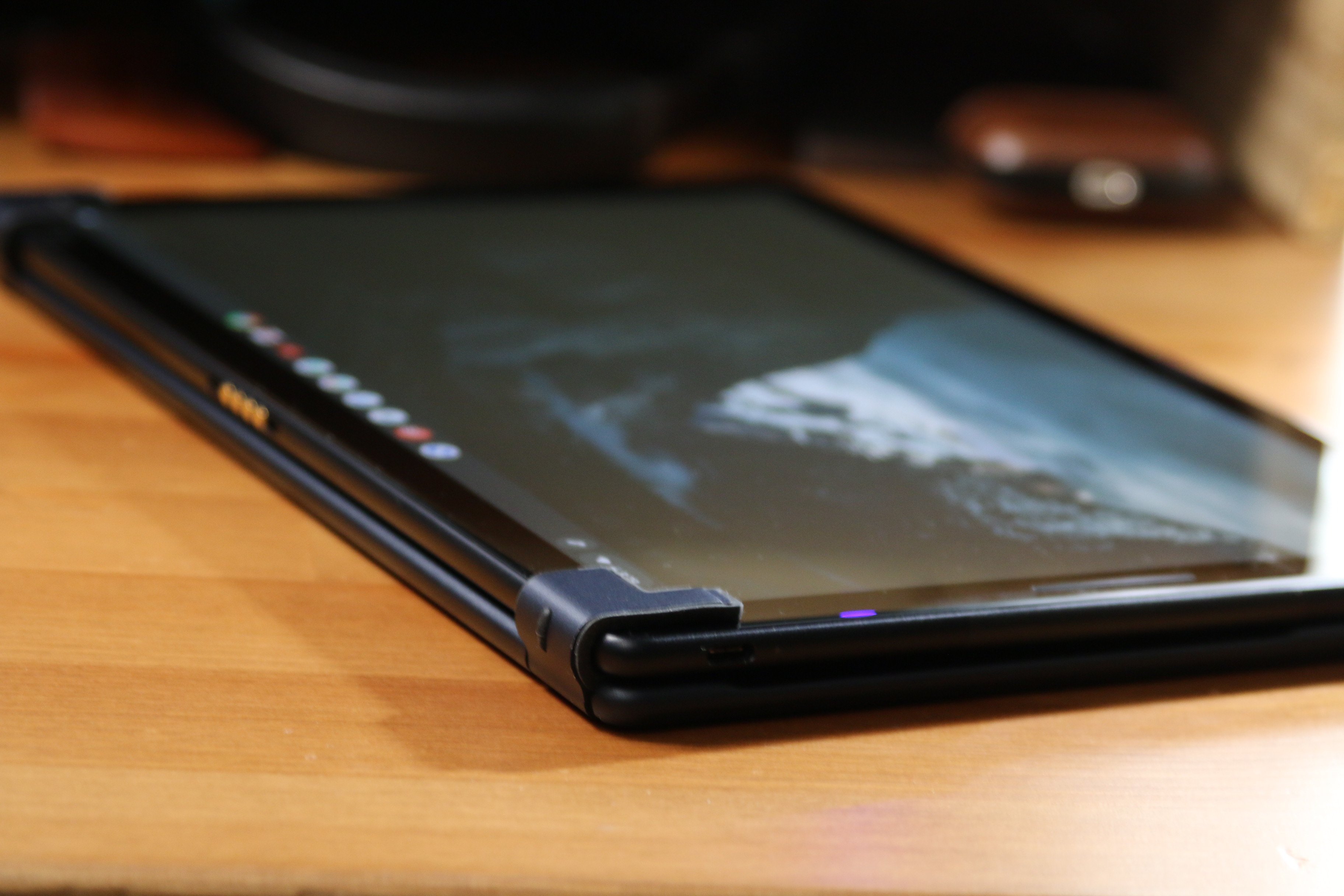 We aren’t expecting another Pixel Slate around the corner, especially since the tablet market is practically dead other than Samsung and budget tablets. So that means that your investment in the Brydge keyboard will be well spent. Plus, Brydge offers a one-year manufacturer’s warranty, so you can just reach out if something starts acting wonky (which we haven’t experienced yet).

The Brydge G-Type Keyboard is still available, and has been discounted at many different retailers. So save a few bucks, get the G-Type, and enjoy typing until the rooster crows. Or, ya know, even after it crows the next morning.

You can pick up the G-Type Keyboard on Brydge’s website, B&H Photo, and Amazon.

Google unveils its own Chrome OS tablet, the Pixel Slate

Google dodges a lawsuit, Pixel Slate leaks, and other news worth knowing