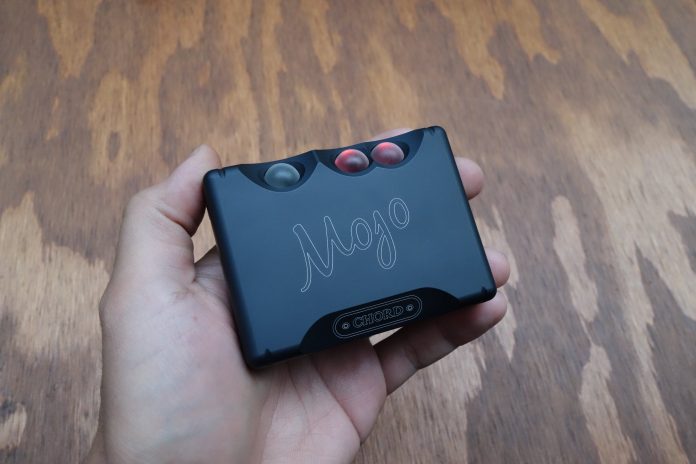 In the world of HiFi audio, there are select manufacturers associated with undisputed excellence. Chord Electronics is one of those. Its specialty is the dedicated sound processor, or digital-to-analog converter (DAC). The company delve into the mobile space with the Chord Hugo in 2014, which did spectacularly in the market. Only, the price made it a pipe dream for the majority of audio lovers.

Fortunately, Chord didn’t take too long to follow up with an alternative, dubbed the Mojo. The name may be humorous, but this compact DAC is all serious when it comes to performance. Despite being a fraction of the size and cost of the Hugo, there’s little in the way of compromise in sound quality. Quite an achievement. Let’s examine if Chord’s Mojo is the real deal.

Mobile audiophiles will be pleasantly surprised when they open the Mojo’s box. Serious DACs are known to be sizable (high-end manufacturers typically put sound quality above all else), so to see one smaller than a deck of cards from a company like Chord is surprising. We’ll see if its ambition paid off in our audio discussion later in the review.

The Mojo’s design is fairly basic but with some nice, original flare. It’s a rectangular block, made from Aluminum and a smooth, black finish. The edges are rounded for an even more refined look and great in-hand feel. There are these swooping cutouts on the top for the buttons and Chord logo, and the Mojo’s signature is front and center.

The buttons are an interesting design choice. All three (volume up/down and power) are semi-transparent balls that light up to indicate statuses (we’ll talk about that the functionality shortly). They sure look cool and snazzy in person, but may be too flashy for folks who prefer discretion. I’m just glad that Chord realized to recess them slightly in the chassis, to reduce the chance of accidental presses (although, it does happen occasionally with handling).

The Mojo is laid out with output on one end and input on the other. The compact and mobile nature of the Mojo means that the 3.5mm headphone jack is the only means of output. Considerately, Chord packs in two ports, so that you can share the audio experience with a friend.

On the input side, we have a few more options. The standard digital input is handled by a microUSB port. There is an additional microUSB port, as a dedicated charging port. This is great, because you’ll still be able to use the Mojo if it runs out of battery (assuming that you have a power source nearby). Since it’s microUSB, you’ll be able to use the same power bank that you carry around for your phone/tablet. The other input options are Optical or Coax.

The Mojo is made for mobile use, so this means that support for Android and Apple devices are in tow. As long as your Android phone has no problem outputting audio via OTG (there should be no worry with newer phones) and you have a microUSB-to-microUSB cable that can do it, then you’re ready to just plug in and go. Unfortunately, Chord doesn’t include said cable, which is a bit of an oversight in my eyes. Such a mobile-focused device should include it. Instead, you get a short USB-to-microUSB. Fortunately, cables are generally cheap (or you can buy a USB-to-microUSB adapter). But still.

The Mojo isn’t complicated to use, but there is a bit more than meets the eye. When you turn it on (holding down the power button for a couple seconds), you’ll see what may be an intimidating display of lights from the round buttons. It’s important to know that the volume has a wide range of fine tuning, and the colors are the visual indication of where you are. Some may question Chord’s design, but there’s a method to the madness. A volume knob wouldn’t give you as much fine control. A huge benefit of this is the Mojo’s power support. It can minimize its output to suit super sensitive headphones (like the Shure SE846) or be powerful enough for demanding full-size headphones (like the Sennheiser HD 800). That’s very impressive, especially when you think about the device’s size.

A drawback can be that there’s a lot of volume steps to go through, but Chord also thought about this. You can hold down on a volume button to quickly move through the range. But a problem with the color indication is that you’ll have to get used to what colors mean what volume. Chord separates the range by 10 different colors, starting at red and ending in white.

There are a lot more volume steps than that, though. So each color gets a couple steps (indicated by a change in brightness) until to moves to the next color. What’s more, there are two full cycles between the minimum and maximum volume. In the first cycle, the “+” volume ball will remain one color (red), while the “-” ball will cycle through the set of colors. Then after it hits white, the second cycle begins, indicated by both balls cycling through the colors simultaneously.

This system may sound complicated, but it’s really not. And the DAC remains at the volume you leave it at, so unless you’re switching headphones, it shouldn’t matter. Still, I’m not a fan of the ball system and feel like it should be more intuitive. And there’s a couple problems with the implementation. The balls are free to spin, for no reason at all. That results in an unflattering rattle when you handle the unit. Additionally, you can’t turn off the lights. Chord lets you switch between two different brightness levels (by simultaneously pressing the two volume balls), but even the lower setting is way too bright in a dark environment. I listen to music in bed and it’s quite annoying.

When you plug in your source and fire the music up, you’ll also see the power button turn a certain color as well. This is a visual indication of the sampling frequency that your source outputs. The color range is the same as discussed before, red for a low frequency (44 kHz) and up to 768 kHz/DSD rates on white. You’ll have to check the manual to know what color means what specific frequency, if you care about that kind of thing.

I also feel it’s important to mention that the unit can emit considerable heat. It’s warm in normal use, but if it’s a bag/case, the temperature can jump up pretty quickly. The worst is when you’re using it while charging at the same time. It doesn’t get hot enough to burn you, but it is quite alarming. I’m surprised it can operate with that kind of heat.

The Mojo’s battery life is decent and more or less what I’d expect from a device this size. It’s said to provide up to 10 hours of playback, but of course, that depends on your volume level. I use sensitive earphones (so I don’t ask for that much power) and I saw around 8-9 hours of life. My beef is with the charging. It charges at only a 1A rate, so it takes a whole 4 hours to get from empty to full. It’s even slower if you’re using the DAC while charging at the same time. The 1A standard also means that the charging port doesn’t play nice with a lot of today’s mobile device chargers (it rejects ones it doesn’t like). I don’t always want to charge the DAC from my computer.

*I used the Shure SE846 and Sennheiser IE 800 earphones for my review.

When we’re talking about a DAC, what ultimately matters is the audio quality. I’ll straight-up say that the Mojo’s sound overshadows any of my complaints about the design. The Mojo is simply a wonder. Let’s talk about what that means.

The immediate term that most reviewers expel when describing the Mojo’s sound is “musical”, and I see why. According to Head-Fi.org’s sound glossary, “Musical” is defined as “A sense of cohesion and subjective ‘rightness’ in the sound”. That “rightness” in sound is precisely the standout feature of the Mojo. The thing is that regardless of how detailed a DAC can be, many fail to capture music’s true essence. The nature of sound in a live performance is much different than what audio gear reproduces, no matter how good it is. But that’s the goal, and that’s the aim that Chord takes. I’m not saying that Chord’s devices can fully do that (none can), but its effort is very noticeable and a huge differentiating factor from other DACs out there. There’s substantial pleasure in a sound that’s not only detailed, but sounds “right”. I’ve never felt so engaged in music from my headphones, and I fell in love instantly.

That said, the lushness/liveliness of sounds isn’t the only thing done right, but their imaging is spread out wonderfully. I don’t think the Mojo has the widest reaching soundstage out there, but when all the dynamics are filling the space around you, it’s of little consequence. Details are equally excellent across the spectrum as far as I can tell. I would say that the iFi Micro iDSD portable DAC I’ve reviewed (a strong competitor) is slightly more detailed towards the upper end of the spectrum, but really, at this point it’s hard to tell. I think the musicality factor is much more a plus.

I want to call the Mojo’s sound signature slightly warm (slight emphasis on bass), but that may be a result of its musical nature. The bass is strong/impactful, but it in no way overshadows. No frequency range in the spectrum is recessed; they all shine with detail and depth. But I have to say that not everyone likes a strong bass, and there’s no analog bass control on the unit.

To sum up the Mojo: A solidly built, compact, portable DAC with some questionable design choices that get overshadowed by stupendous, somewhat unrivaled sound. Chord Electronics did a magnificent thing here, and despite some distinct and valid complaints in the design, this is simply the best DAC on the market that you can take on the go.

The Mojo does cost a pretty penny, at $600, but this is the kind of DAC for an end-all setup (assuming you have invested in a high-end headphone). You won’t regret the Mojo.