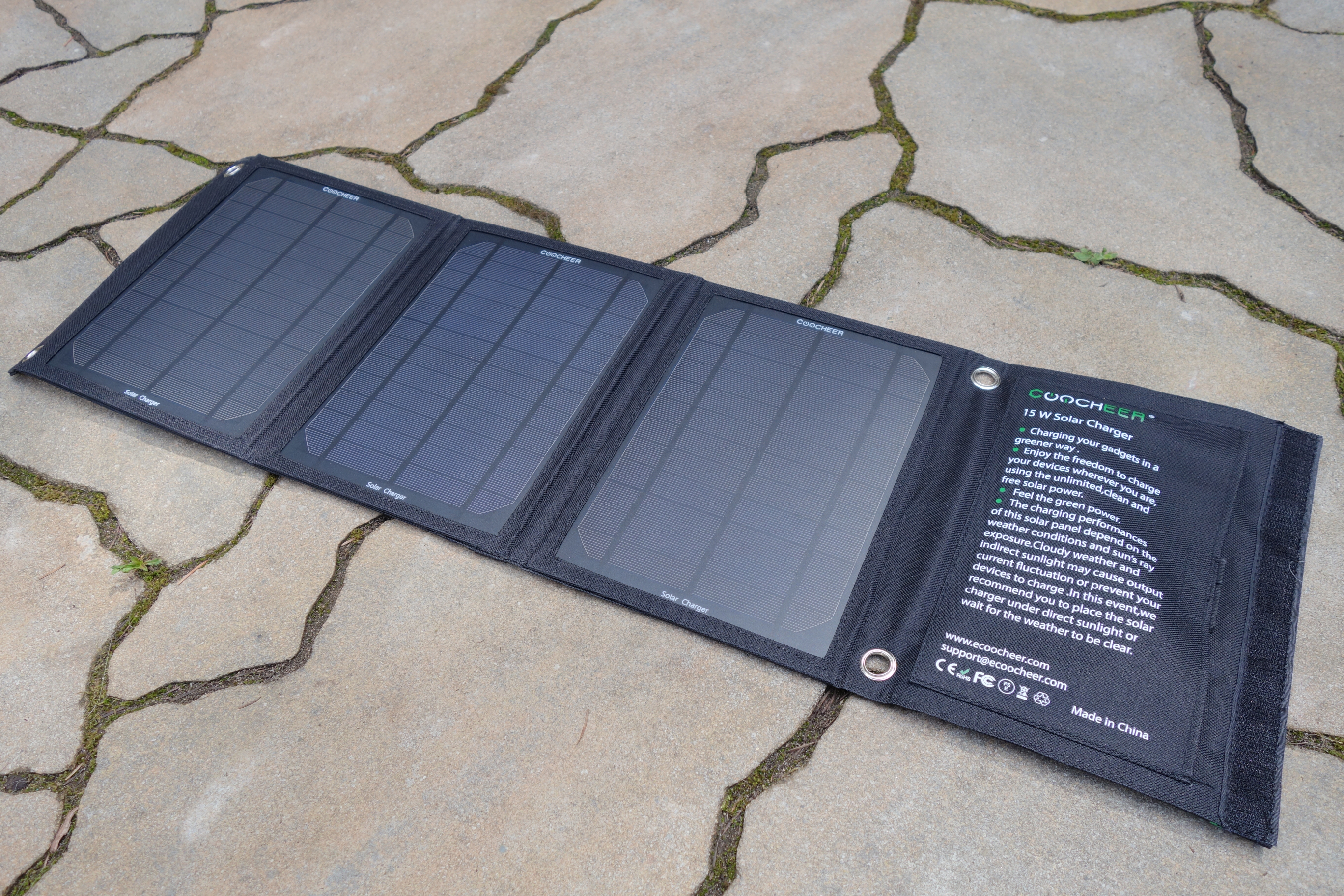 [dropcaps]We don’t always have an electrical outlet readily available, most certainly on a trip to the great outdoors.  And God forbid that we don’t have access to our precious devices!  So what options to we have?  Well, we can charge up several portable chargers and hope it’s enough.  Or you can buy one charger and efficiently let the sun do the work for you.[/dropcaps]

If the latter sounds great but you’re suspicious of the effectiveness of such a device, let me introduce the Coocheer 15W Solar Panel Charger. 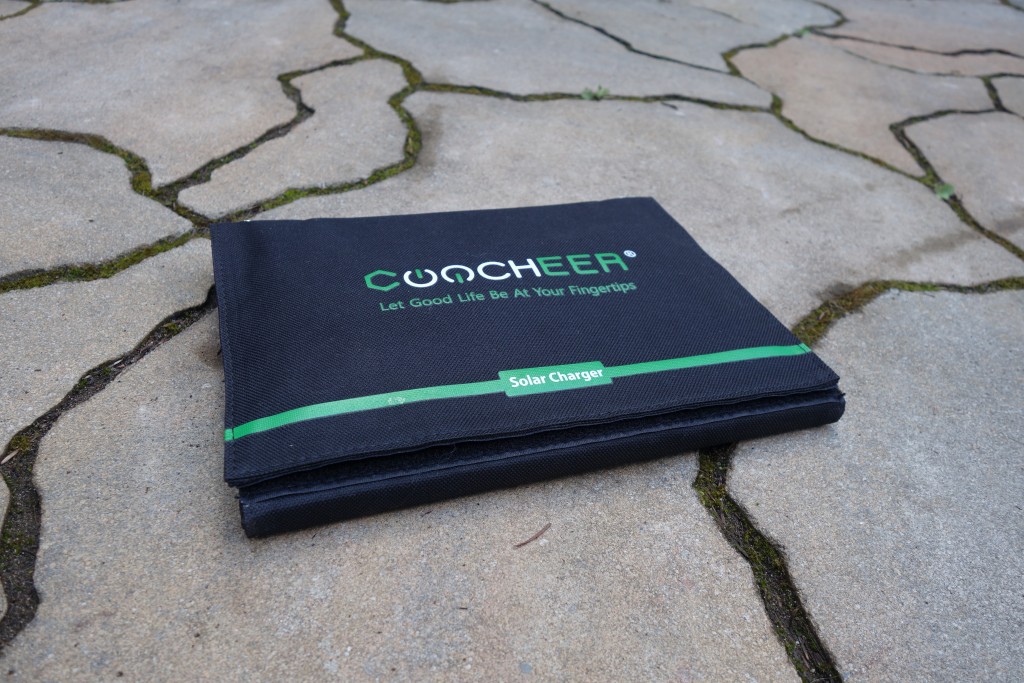 I must mention that I’ve tried solar panel chargers before, but to no avail.  They either didn’t charge fast enough for the worth or just didn’t work period.  But when I spotted Coocheer’s seemingly robust implementation, I really wanted to know if a solar panel charger could be done well.

So what makes this solar panel charger so special?  For starters, you have not one, not two, but three considerably-sized solar panels. 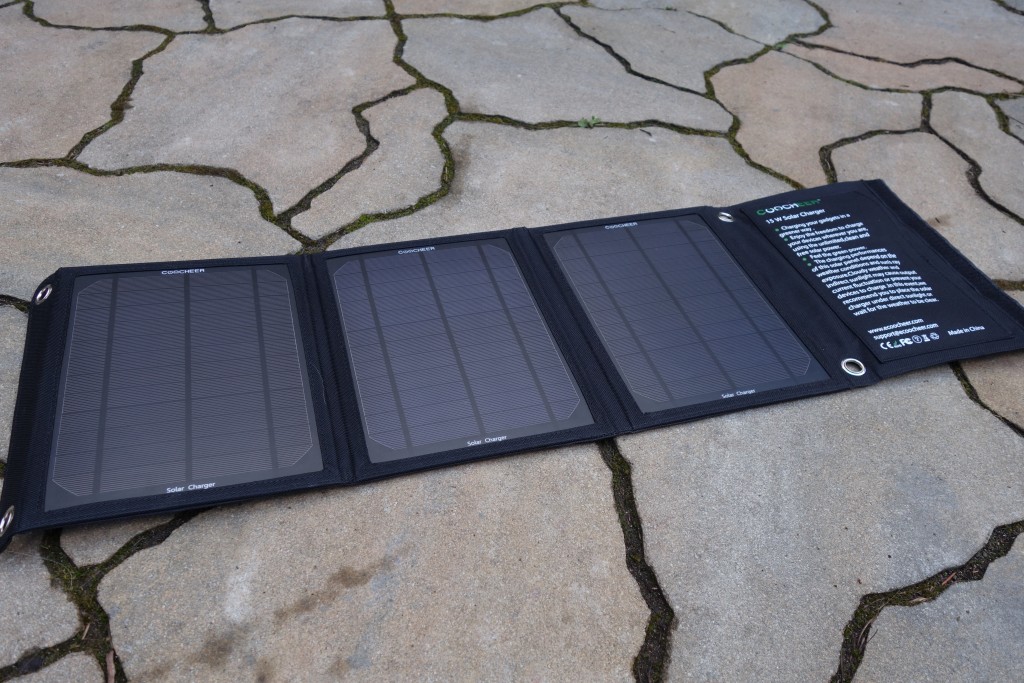 This translates to 15W of power output (given you have full sunlight, of course).  Therefore, Coocher was able to put in two USB charging ports, one capable of 2.1A and the other 2.5A.

In order to make the system effective, the solar panels are fairly large (slightly smaller than printer paper).  At full extension, the charger is about 2.5ft wide.  But you won’t be carrying it around that way.  Fortunately, the charger is foldable for portability.

This system is a fantastic way to circumvent the fact that you need large panels in order to make solar charging worthwhile.  Yes, fully laid out, the large footprint can be cumbersome to have around.  But if you’re stationary (i.e. camping) or have it strapped to your backpack while you’re hiking, it should work just fine.

There are cutouts at the extreme corner of the panels that can serve as attachment points. 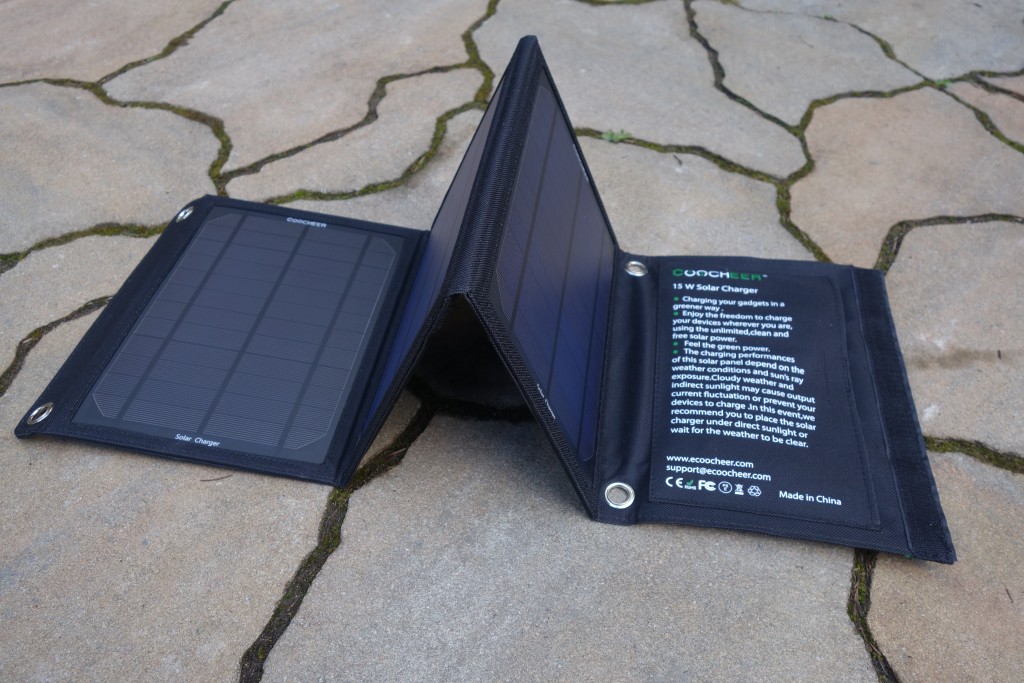 Also, because there is folding point between each panel, you have the flexibility to change the size.  For instance, if you only need to charge one device, you can shorten the length to one or two panels by folding in extra panels. 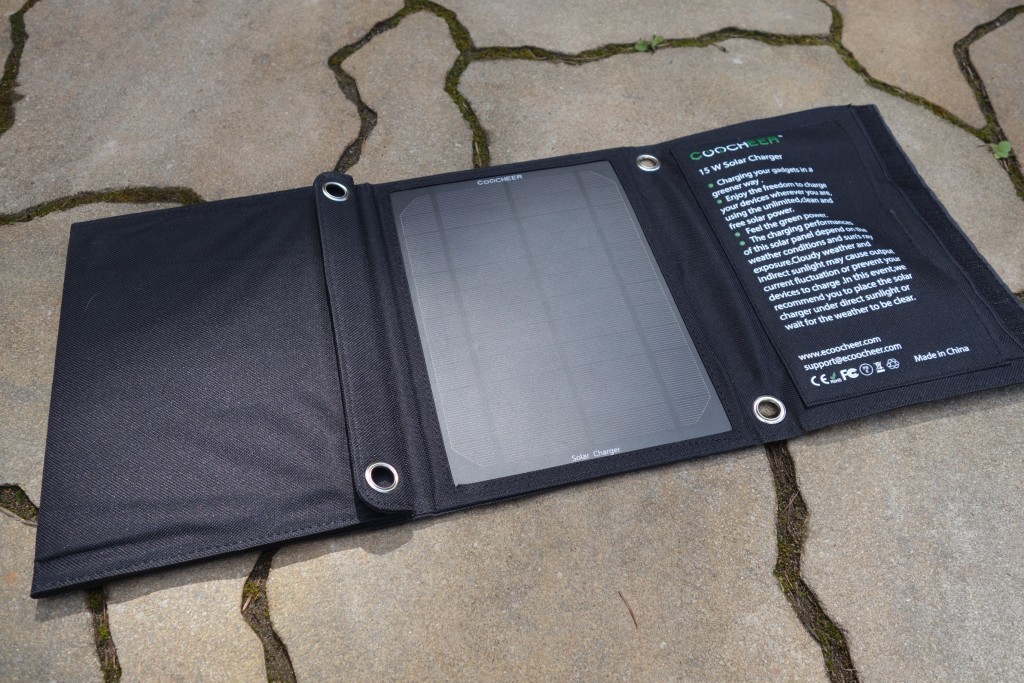 The charger is made out of woven fabric material, like that is used for backpack straps.  Therefore, the entire assembly is sturdy. 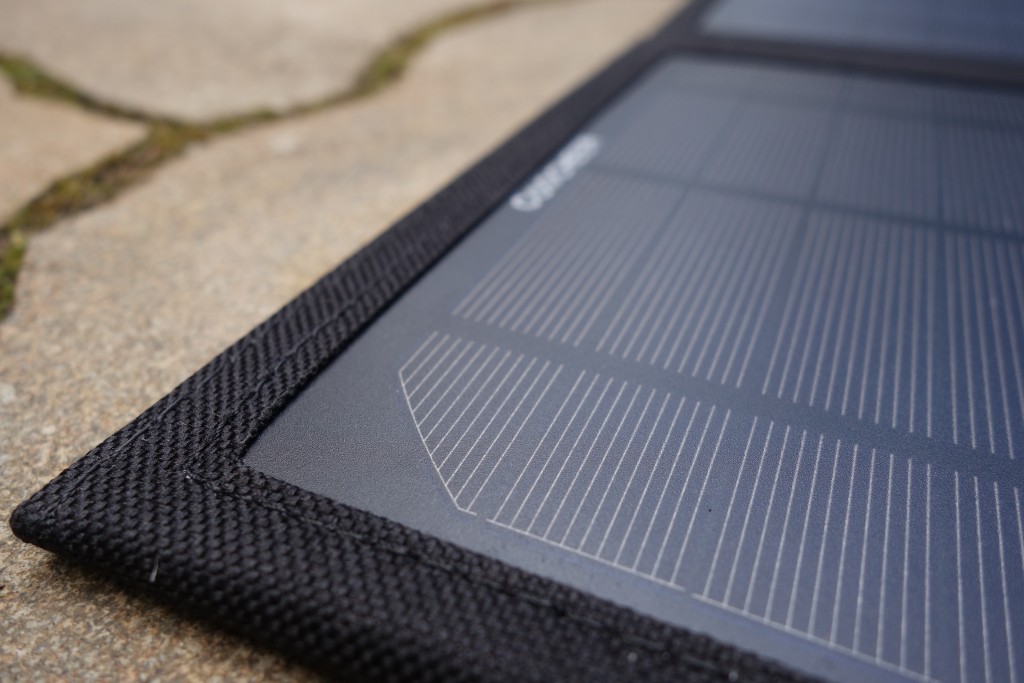 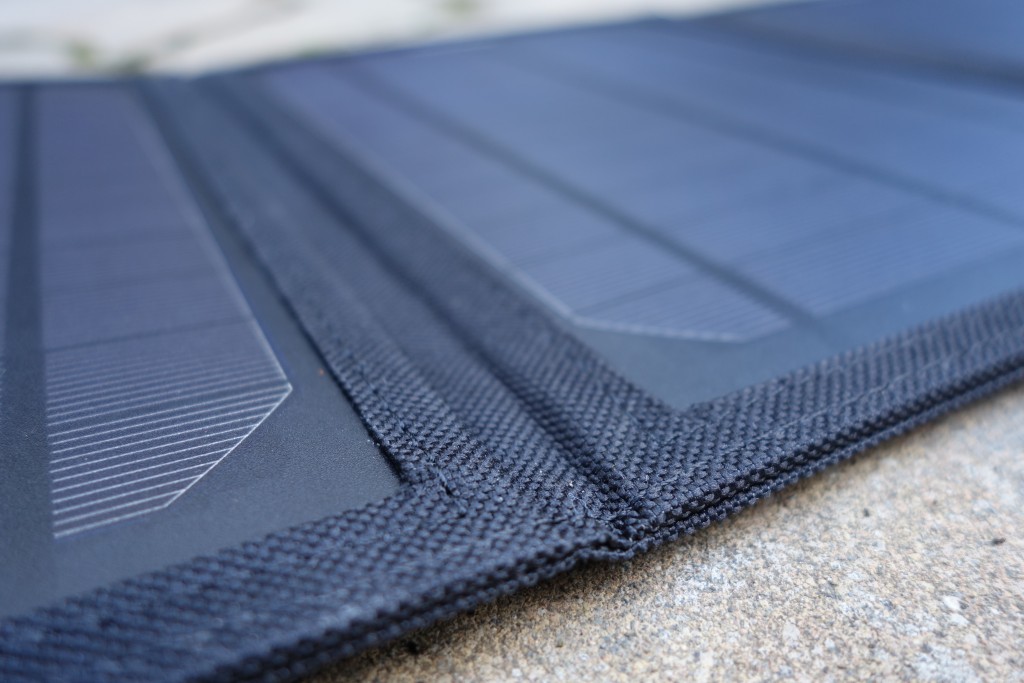 The solar panels are protected by a plastic film and adhered to the surrounded fabric.  I feel like I can toss this thing around and it will be just fine.

The base of the charger houses the two charging ports within a pocket. 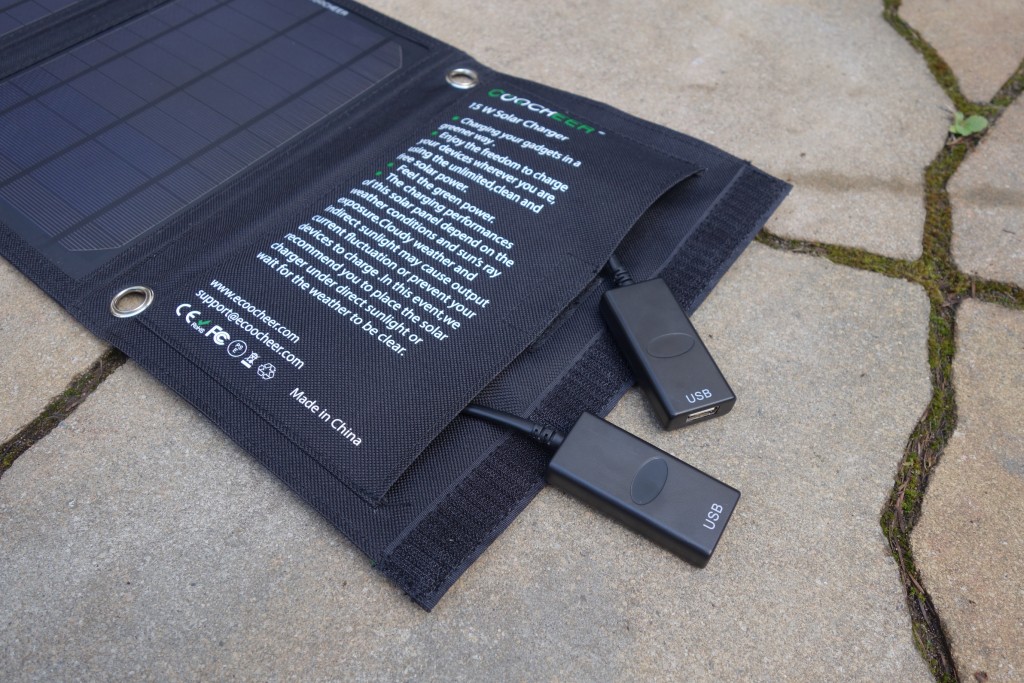 The plastic housing of the charging ports do have somewhat of a cheap feel, but they work.  I wish Coocheer labeled which one of the USB ports is the one that outputs more power, for faster charging if your device supports it.

The pocket is held shut by Velcro, so smaller devices can be thrown in there while they charge.  A Velcro lining is also used to keep the charger from unraveling when you fold it completely up. 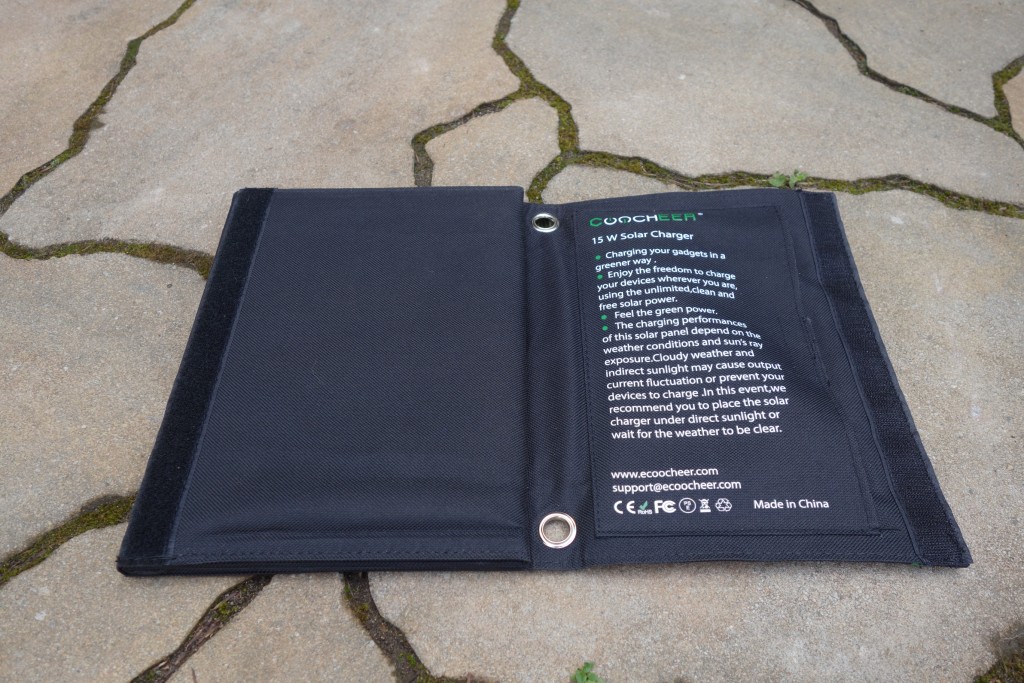 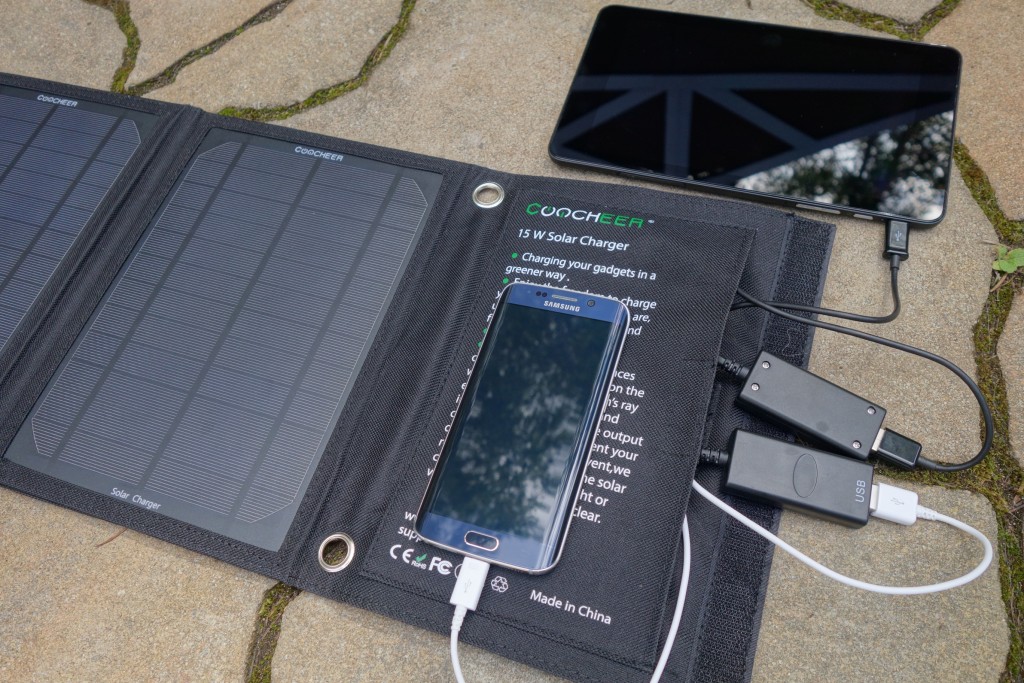 I gave the charger a couple test runs, on a overcast day and on a sunny day.  The results met my expectations.  On the cloudy day, I wouldn’t recommend plugging in two devices.  For me, I just got enough juice to keep my phone’s battery percentage at bay.  But this is certainly better than it draining!

On the sunny day, it was a much better story.  At 50%, my Galaxy S6 estimated about 1 hour to charge the battery full.  This is pretty darn close to Fast Charging speed!  Pretty impressive for a solar panel charger. 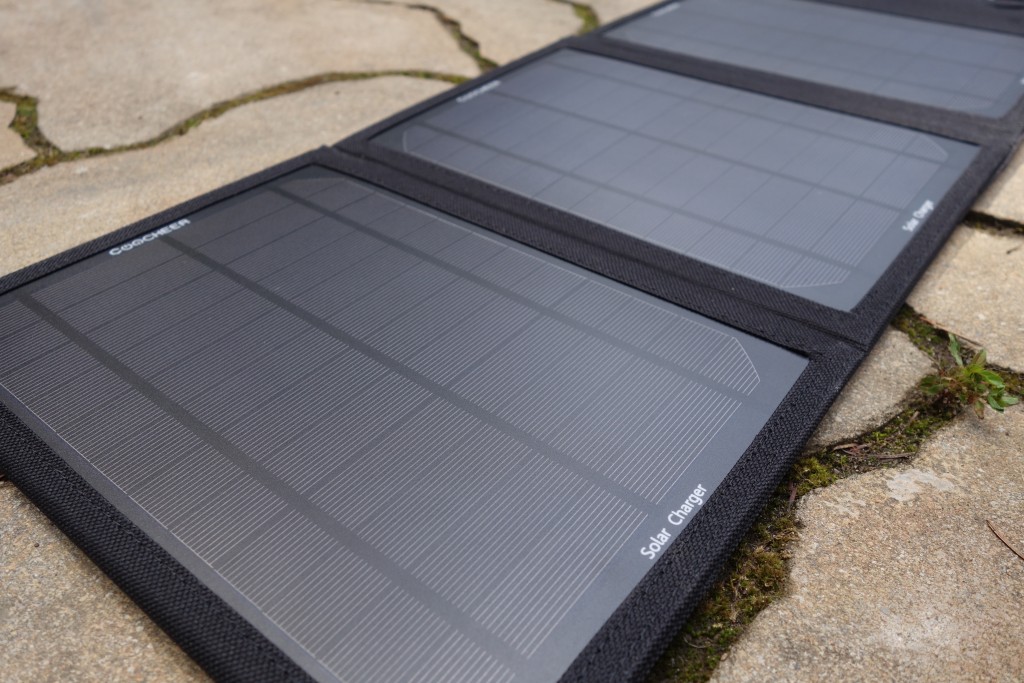 I’m very pleased with how the Coocheer Solar Panel Charger worked out.  Yes, it’s larger than typical battery packs.  But the size is a limitation of solar panel technology, not a limitation of the manufacturer.

Having extendability that maximizes solar effectiveness, with the ability to compact down to roughly the size of a sheet of paper, is a fantastic way to make solar panel charger practical.  Also, the charging speed at full sunlight blew me away, along with the ability to charge two devices at the same time.

I won’t completely get rid of my battery packs, as the solar panel effectiveness is obviously largely dependent on sunlight.  But now they can serve as backup if/when I need them.  One thing’s for sure, I don’t need to worry about running out of battery.

Motorola’s new Polaroid Insta-Share Printer Moto Mod will take you back with $199.99