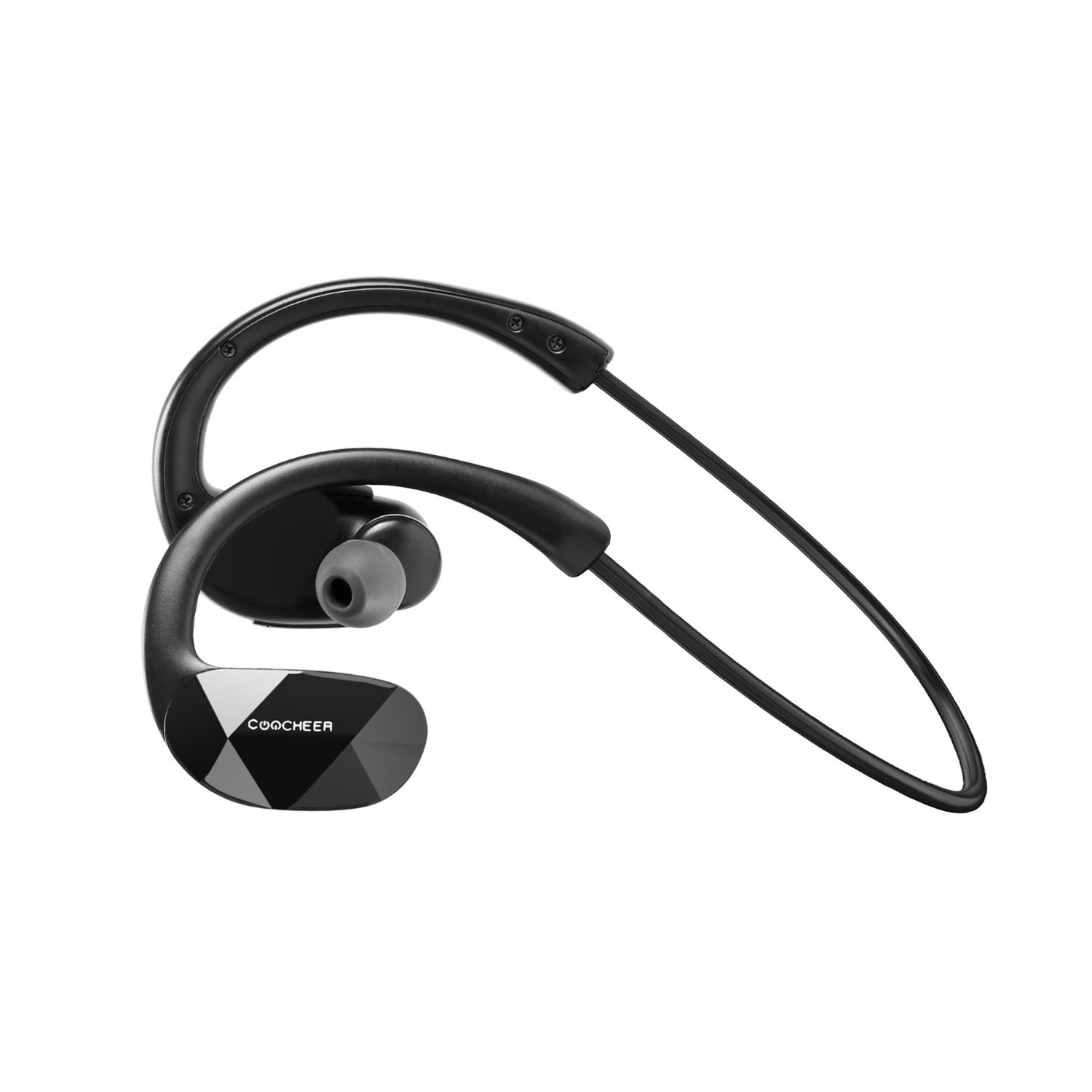 It’s interesting to see how different manufacturers decide to build their Bluetooth headphones. We come by a lot of them at AndroidGuys, and they’re all different. Most wired earphones have the same look, more or less. But when you make them wireless, it’s a whole ‘nother deal. Manufacturers have to fit in a battery, microUSB port, and Bluetooth radio. Hence, they end up being much bigger and potentially less comfortable.

Coocheer was the latest accessory manufacturer to let us have a try at its approach to the affordable Bluetooth earphone. At a retail price of $30, I imagine there’s quite a challenge to fit all that technology in, make a great sounding product, and a profit. Let’s check out how Coocheer did and if this is a Bluetooth headset you should have by your side. 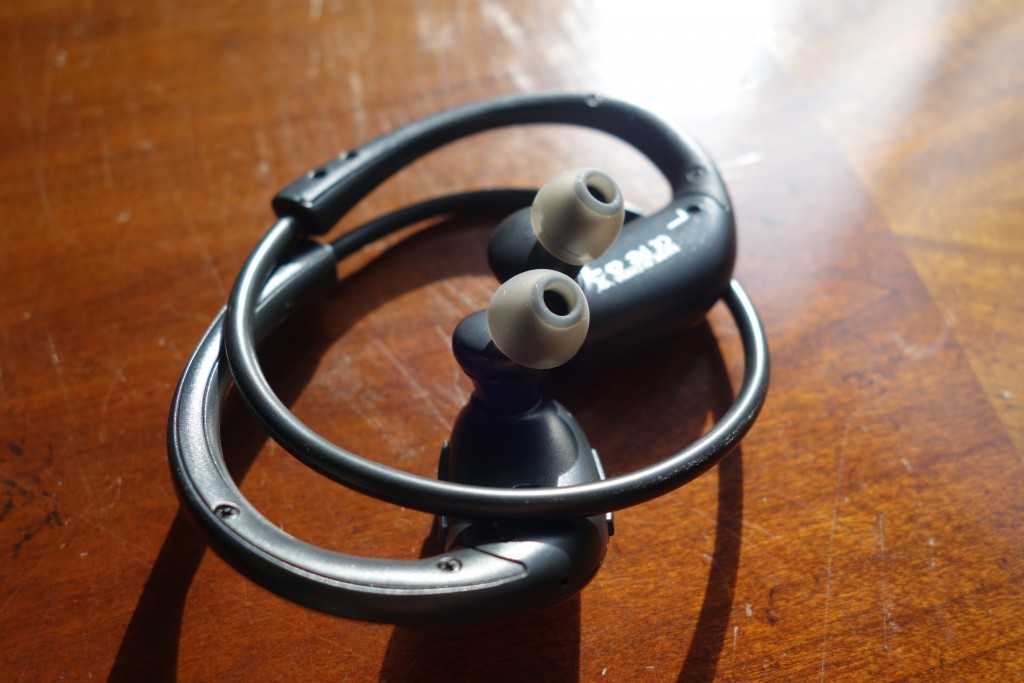 When I opened the box, I had a positive first impression of the Bluetooth earphones. The design seemed to make sense from a functionality standpoint. 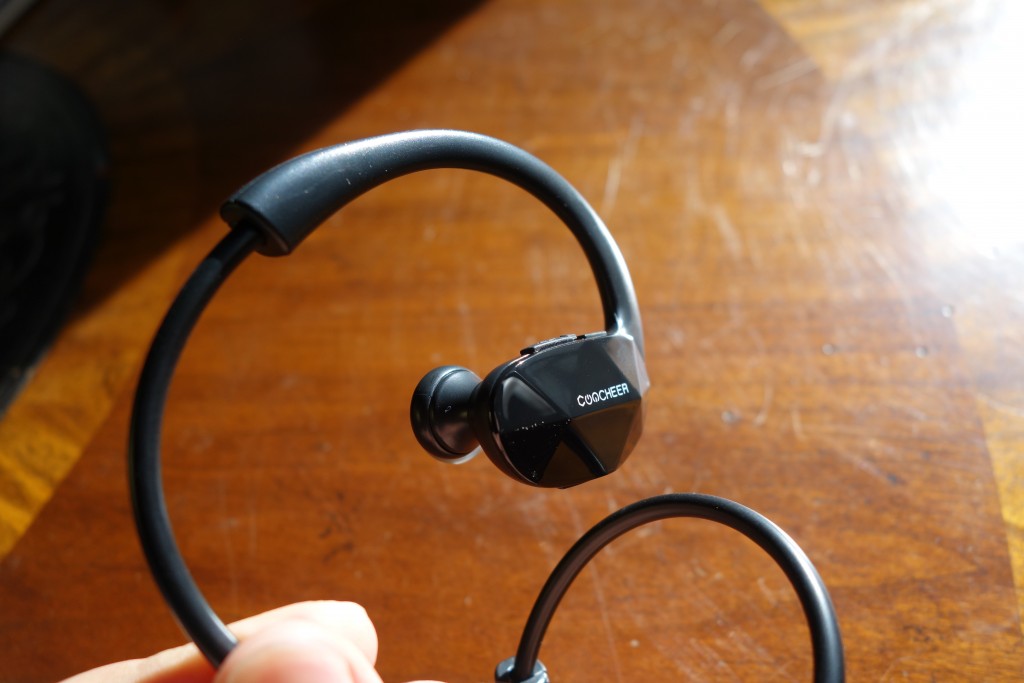 The shape is reminiscent of high-end IEM pods, which redirect the cable over and behind your ears. Although, these are much bigger in comparison and don’t fit the same way, I’m strictly speaking about the design.

Interestingly, the earpieces are bridged by a thick cable that really resists being straightened. Its desired form is to be coiled up. But this isn’t a design flaw, that was the intent.

When you’re not using the earphones, it hunkers back into a compact, portable shape. What’s neat is that when you stretch the cable out, it forms the wearable shape. 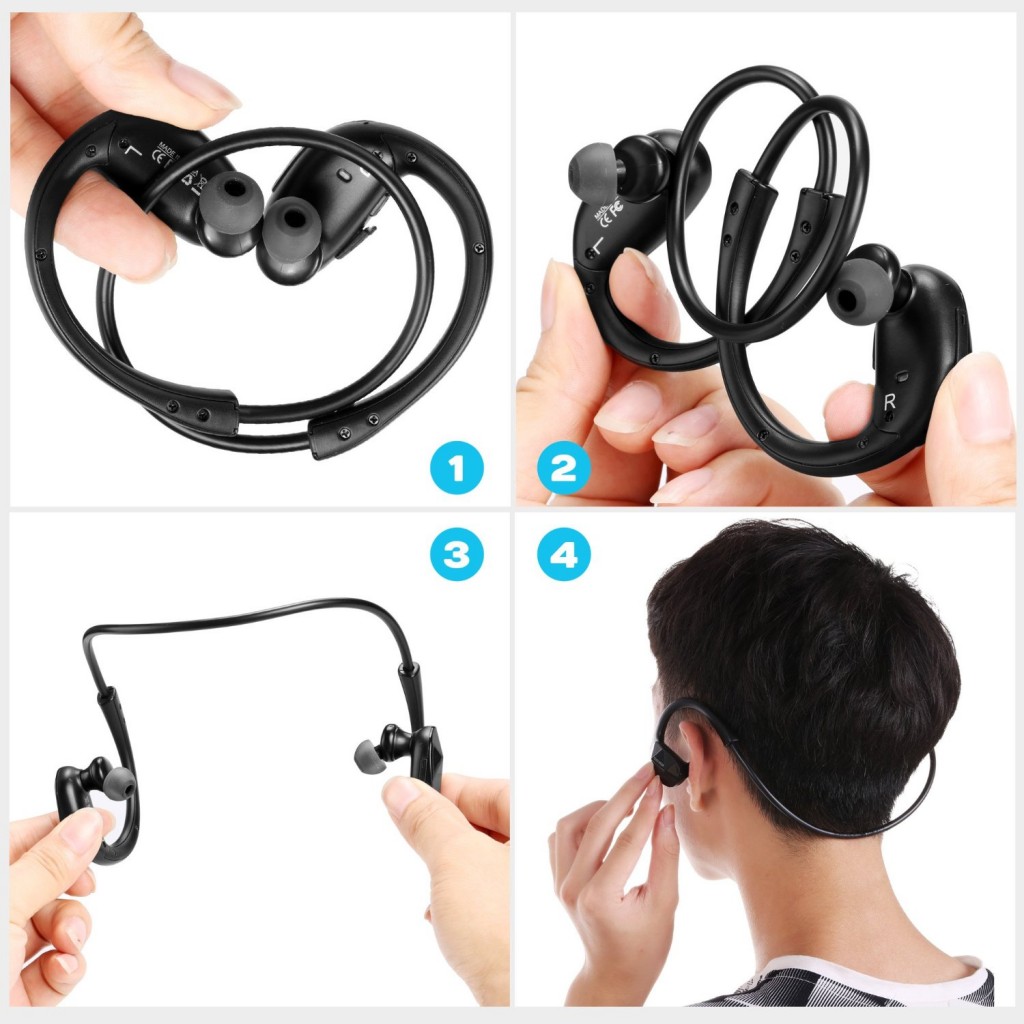 The cable is meant to go up around your ears and against the back of your head. The stiff guides that curve out of the earpieces are what forces the form. We’ll talk about fit and comfort a little later.

I appreciated the earpiece design. While a majority of the build of the earphones is typical, hard plastic, the surface of the earpieces have this cool triangular texture. 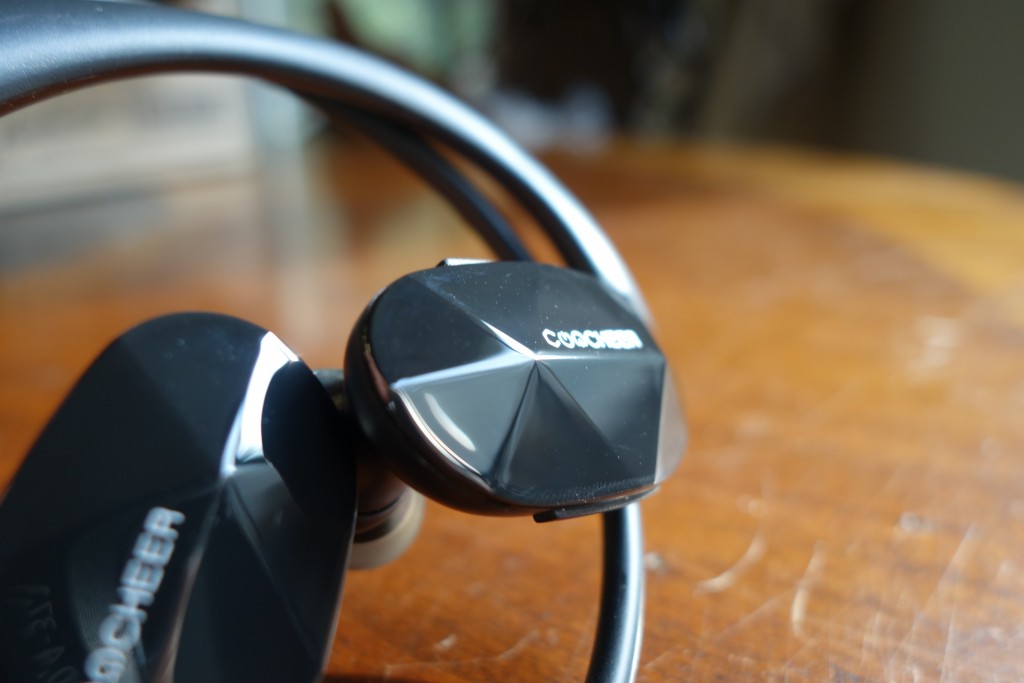 Also, it’s glossy, so the varying angles of the texture reflect in different ways. It’s a nice little touch to simulate a high-end look.

The audio component stems out of the earpiece. There’s a plastic bubble between the eartip and earpiece. I assume this is where the audio magic happens. 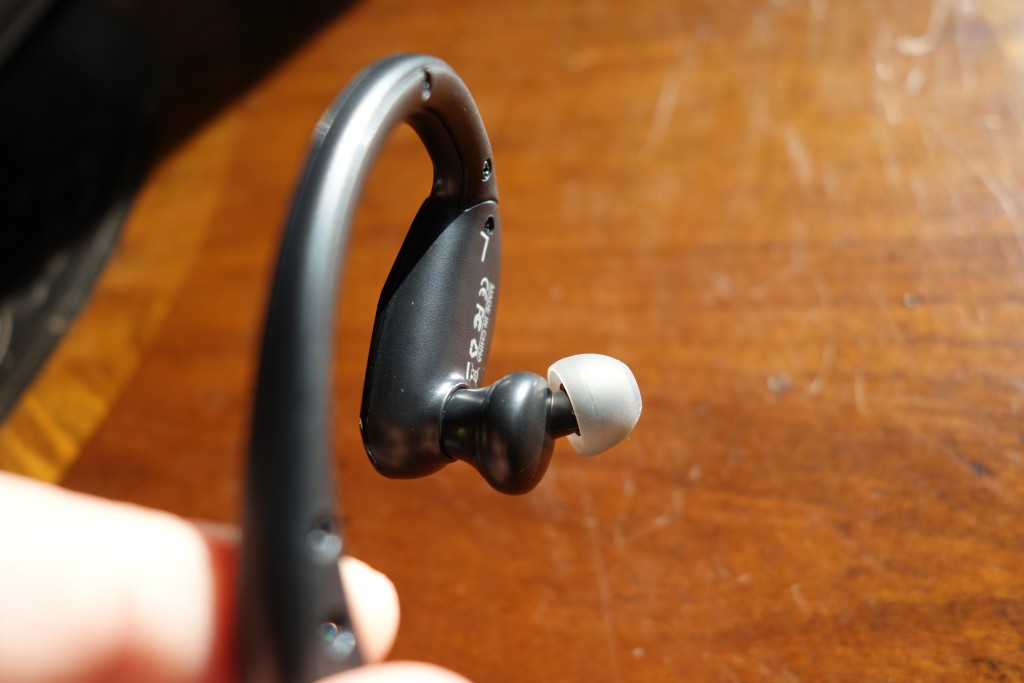 The eartip is your typical silicon form, which is meant to go inside the ear canal and isolate.

So one of the biggest questions with earphones is how does it fit? It was honestly a bit of a mixed bag for me. The stiffness of the cable causes a bit of resistance when you’re trying to situate the earpieces in place. Also, for some reason I just couldn’t get any size of the eartips to create a reliable seal (three different sizes are included – small, medium, and large). But this is a huge “your mileage may vary” scenario, it totally depends your inner ear shape.

The good thing about the stiff cable is that it won’t be flopping around if you’re exercising. It will keep its form when it’s set. And with bouncing and moving my head around, I found that the rigidity substantially helps to keep the earpieces in place.

A minor annoyance was with the flap that covers the microUSB port. It too easy pops open. The flap isn’t flush and is a little flimsy, so it’s sensitive to bumping open as you’re handling the earpiece. 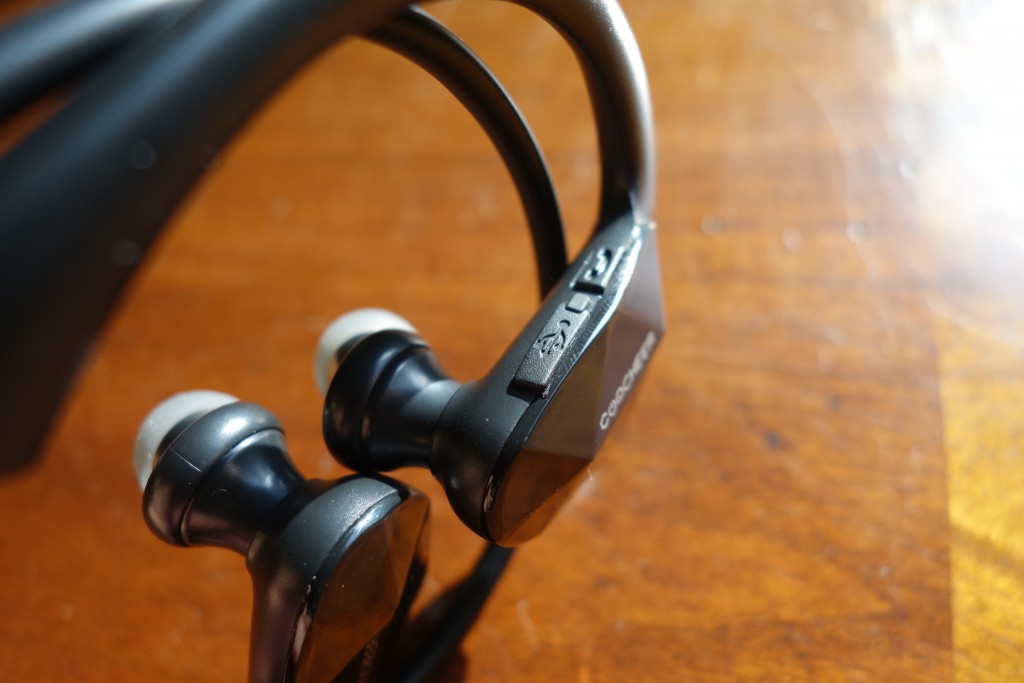 As far as features, there is a blue/red LED that lets the user know the status – charging (solid red), pairing mode (blue/red flashing), or playing (slow blue flash). There is a microphone in case you’re interrupted with a call (there is a button you press to pick up the call) and a volume rocker. The Bluetooth standard is version 4.1. The signal range is about 30 feet. 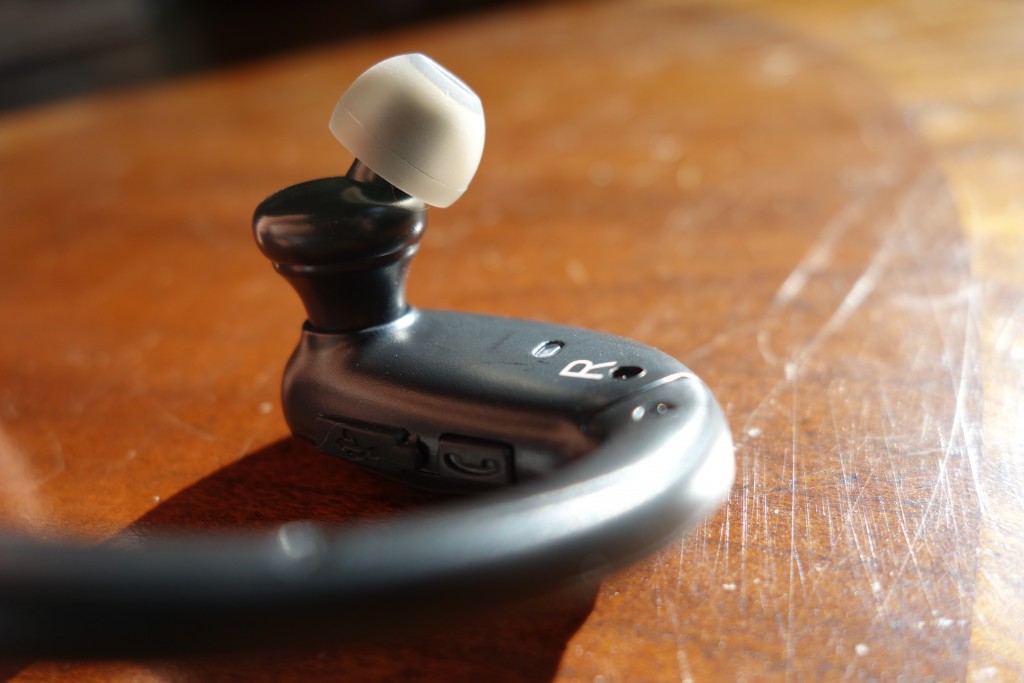 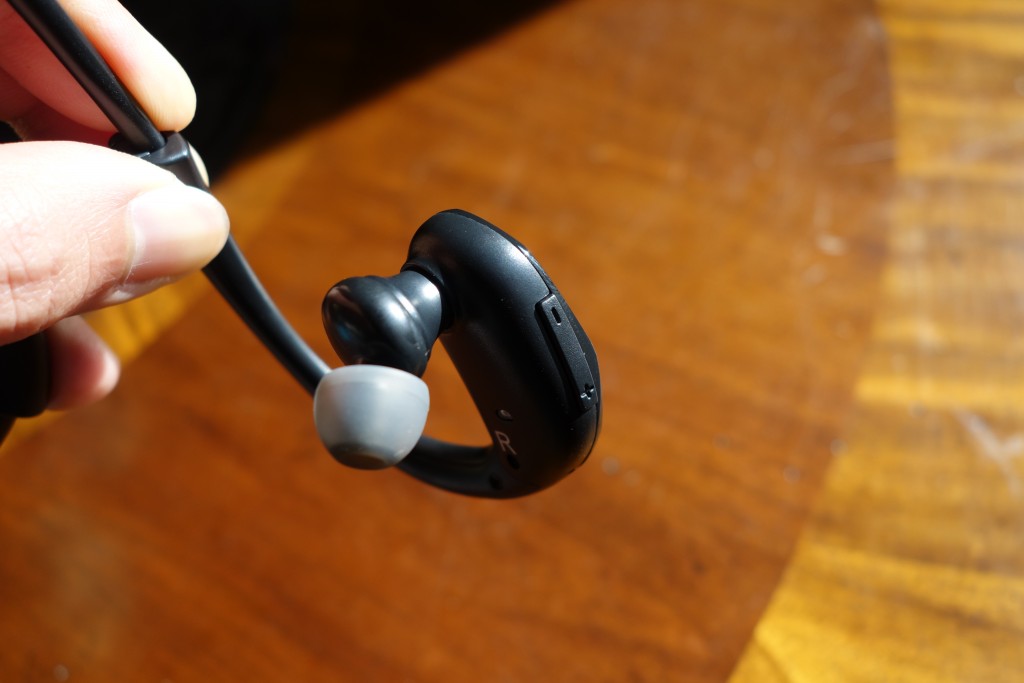 Coocheer’s Bluetooth earphones pack a 120mAh battery. The company rates it for 6 hours of music time, 8 hours of talk time, and up to 160 hours of standby time.

I tested the music time (playing music from a full charge until it died) and was left impressed. Instead of the rated 6 hours, it went to about 9 hours. This is a decent amount of battery life for Bluetooth headphones.

Considering the $30 price tag (and the development needed for the wireless-enabling components), you may not be expecting the best audio output out of these things. That’s certainly justified, but let’s go over exactly where they stand.

If you’re a basshead, these earphones may not be your cup of tea. The first thing I noticed off the bat is that fullness that bass should provide (particularly, mid-bass) is lacking. This can also be described as thin sound. Also the treble lacks some detail. For instance, sounds from cymbals fall flat, when there should be some sparkle.

I did enjoy vocals, however. Clarity in the mids is decent and vocals sound natural. Also, in regard to imaging, there is distinct separation between instruments. 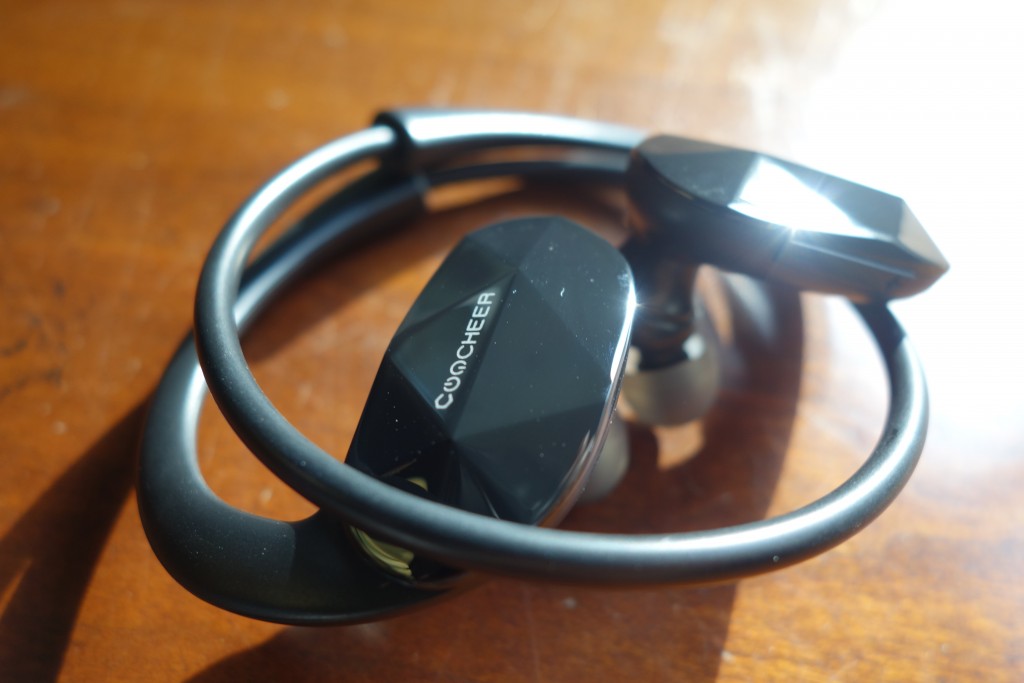 With budget earphones, the consideration revolves around value. In other words, how much you get for your money. So despite the cons I’ve found, are Coocheer’s still worth the low $30? I think so. It’s not like they don’t work. They’re just not as refined as I would like them to be.

But at $30, you know they won’t be perfect. Actually, on Amazon

they go for only $20. This is dirt cheap for a wireless earphone. Therefore, if you’re tight on money and want something that just works, then go for it.