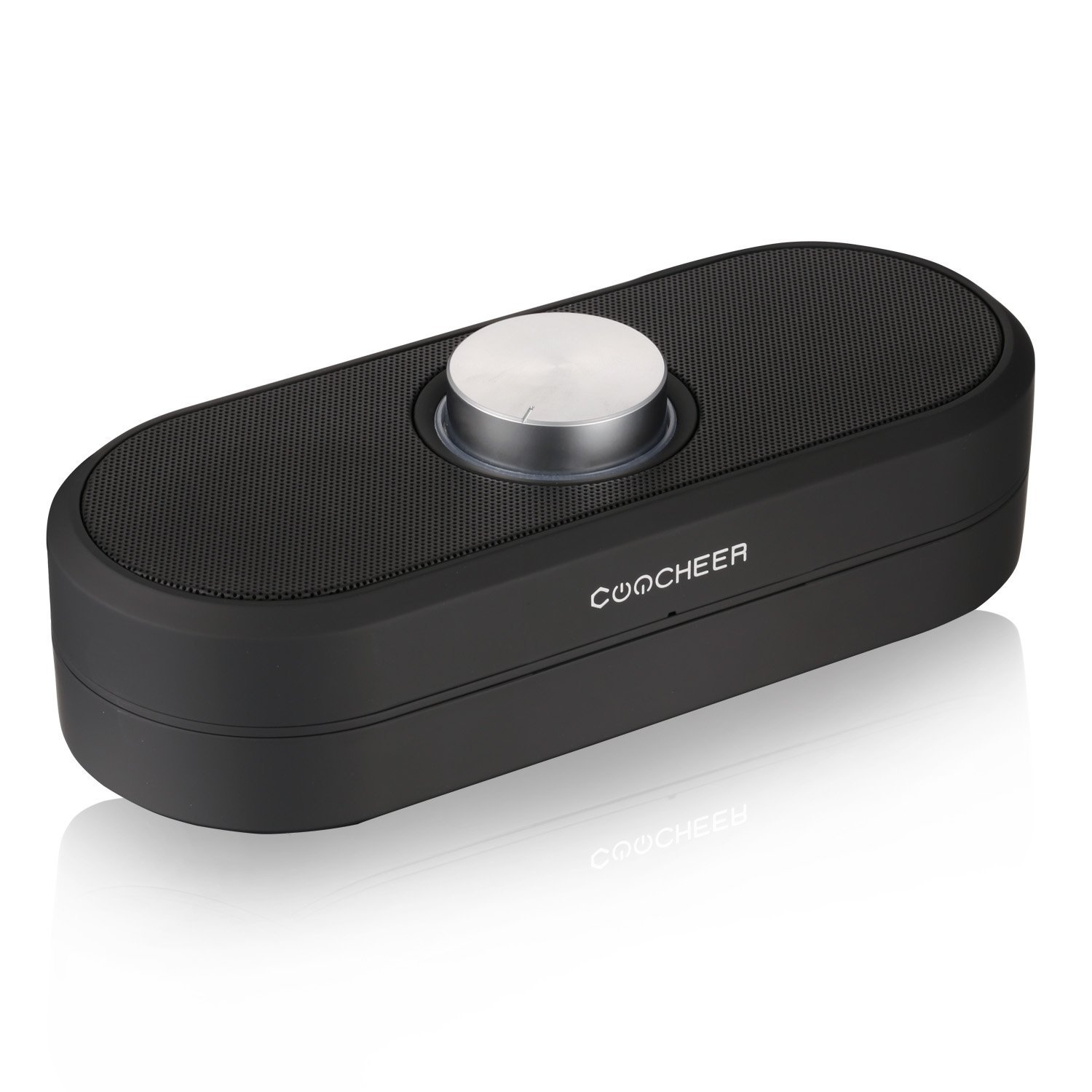 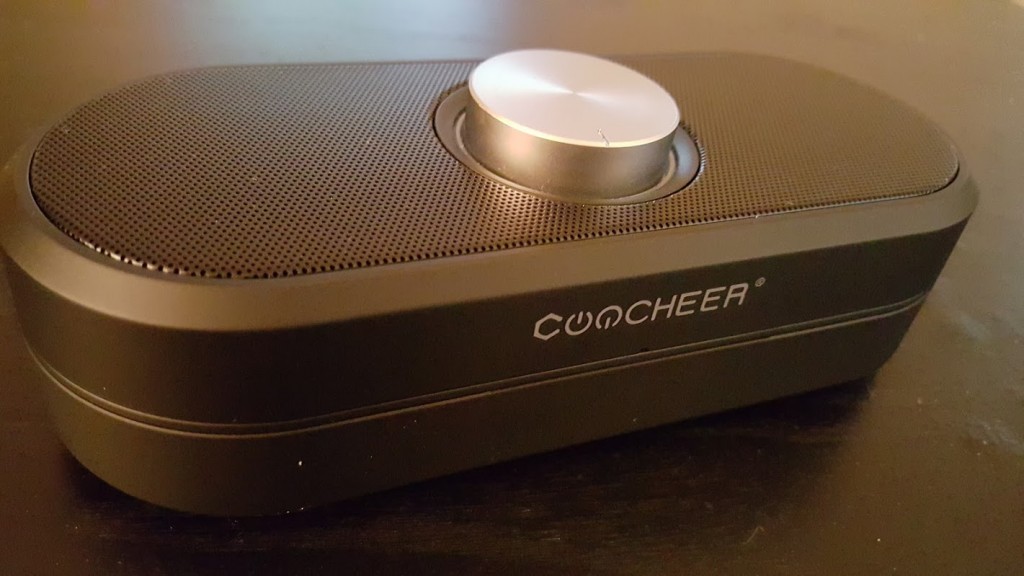 Coocheer is well-known for making great speakers, chargers, and headphones, and the CH-080 Bluetooth speaker is most definitely no exception. From its simple, matte design to its quality sound, the CH-080 packs quite a punch. Let’s see what makes it tick. 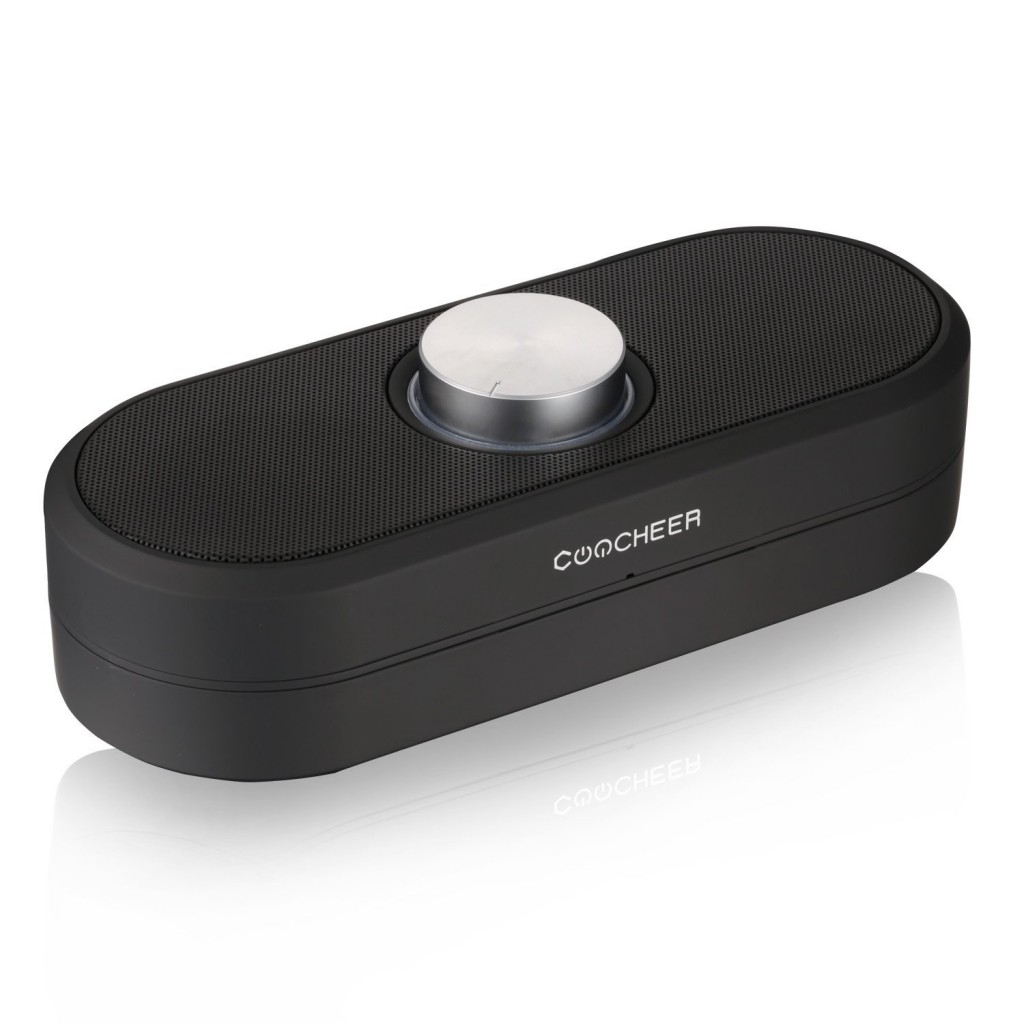 Coocheer didn’t aim for flashiness or complexity with this speaker, which is actually a nice change of pace. The soft-touch matte plastic wrapped around the speaker give it a premium feel without the premium price tag. The only button on the entire device comes in the form of a large round dial which sports a colored LED ring around its base. Other than a 3.5mm audio jack, microUSB charging port, and an On/Off switch all lined up on one side, the CH-080 is left largely untouched by extra, unnecessary buttons. There’s a single microphone on the opposite side (right below the Coocheer logo in the photo above) as well, so you can use the speaker for voice commands and the occasional phone call.

It weighs in at just over one pound, so it still falls into the realm of a portable Bluetooth speaker. Its footprint isn’t very large, which means it should fit into most backpacks or messenger bags without any real issue. Unfortunately, Coocheer only offers the speaker in black (I would have loved to see a white or even a blue version). 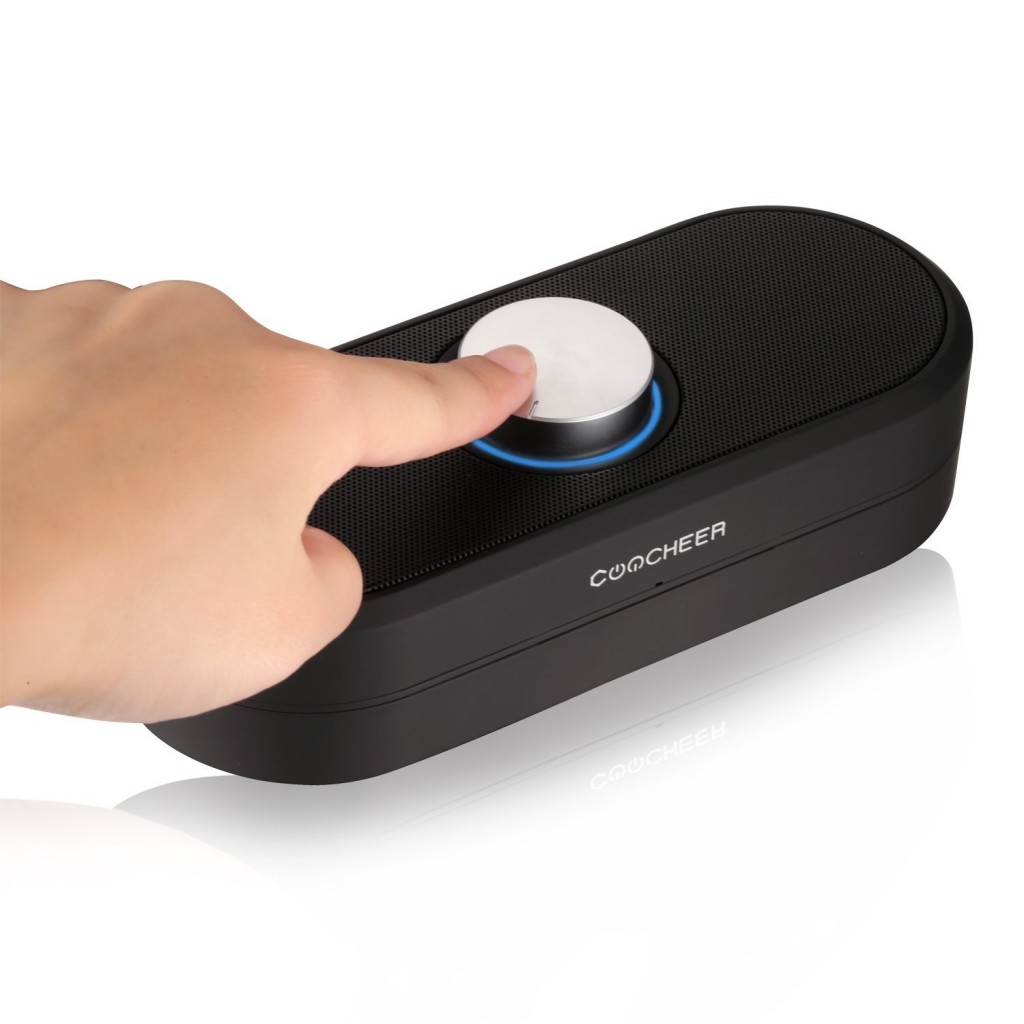 As a Bluetooth speaker, the CH-080 works very well. It connects quickly and without any hassle, and I never experienced any stutter, song lag, or disconnections. Coocheer built this speaker with Bluetooth 3.0, which isn’t the latest standard, but it holds its own when playing music and taking calls. It also packs NFC, something we’ve seen in more and more Bluetooth speakers as of late.

If connecting through your phone/tablet’s Bluetooth settings fails (not very likely, as mentioned), you can (theoretically) always hold your device against the speaker to initiate the connection. In practice, I can’t say that the NFC in this case is very reliable. Try as I might, I could only get my Galaxy S6 to pick up the NFC from the speaker once or twice. I also tried a Moto X Pure Edition, with the same results. This is after dozens of attempts and a considerable amount of time pressing my phone against every inch of the speaker just to find the sweet spot. I appreciate that Coocheer included NFC as a connection option, but if it isn’t reliable, it’s almost useless to the average user. 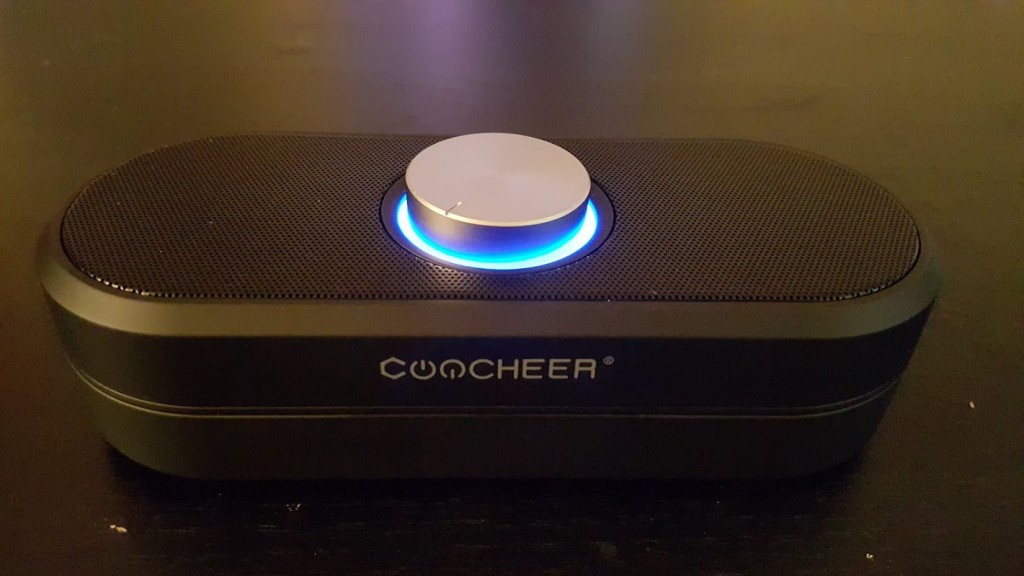 Coocheer’s large dial in the center of the speaker (naturally) controls the volume, but the designers baked a little extra functionality into the dial, which doubles as a button. A single press serves as a pause/play function, but if you hold the button for three seconds, the LED ring will flash, indicating that the speaker has entered what Coocheer calls “Song Control Status.” This is essentially a mode in which turning the dial changes the song rather than the volume. It works exactly as you’d expect: enter Song Control Status mode, turn clockwise to skip to the next song and counterclockwise to return to the previous song. This may seem like a simple addition, but it is extremely useful when your phone or tablet is far away and you just want to change the song. Coocheer found a way to make this feature useful, without making it too complicated or adding extra buttons. Simplicity goes a long way with this speaker, something that users are sure to appreciate.

The inclusion of an LED ring around the base of the dial adds just the right amount of pizzazz to an otherwise blank slate of a speaker. The ring stays a light blue color, and turns a brighter shade of purple when the speaker is charging. When entering “Song Control Status” mode, the blue ring will flash. Other than that, the light remains on as long as the speaker is on. Coocheer didn’t include any way to turn off the LED, but it isn’t obtrusive enough to really be a bother anyway.

Coocheer’s speaker sounds great; there is no other way to describe it. Strong lows and accurate mid-range sound comes almost seamlessly from the speaker. The distribution of sound is fantastic, thanks to the CH-080 sporting two speakers that flank the dial in the center. Coocheer built the speaker with “Bass Enhance Technology,” which is basically a fancy way of saying that it can put out some reasonable bass for a small(er) speaker. It won’t shake any wine glasses or blow anyone away, but it can hold its own if you’re using the speaker at a house party or to listen to some tunes while you mop the floors.

The CH-080 can get considerably loud, and it doesn’t seem to distort much at higher volumes. Obviously if you overload it with bass, it’s going to sound a little wonky, but overall this little speaker can make some noise. 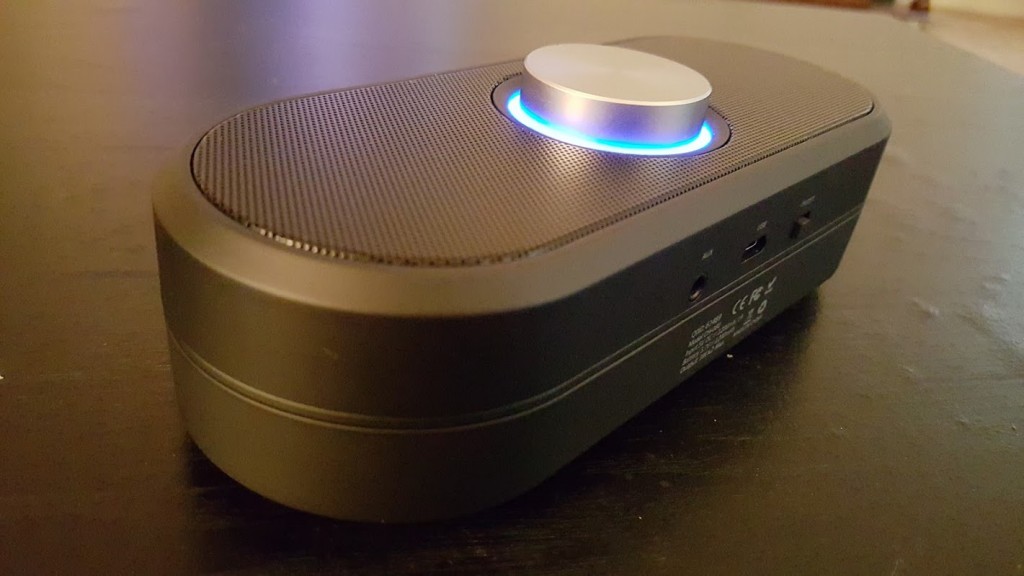 Coocheer was obviously trying to create a solid, simple, affordable Bluetooth speaker with the CH-080, and it definitely hit the mark. For just $19.99, this is hands-down one of the best speakers for the price. While the NFC issue is somewhat annoying, it isn’t really a deal-breaker. The CH-080 looks great, sounds great, and works almost perfectly. If you’re looking for a strong speaker at a reasonable price, this is definitely a good option.

If you’d like to grab a CH-080 speaker, you can grab one from Amazon here.