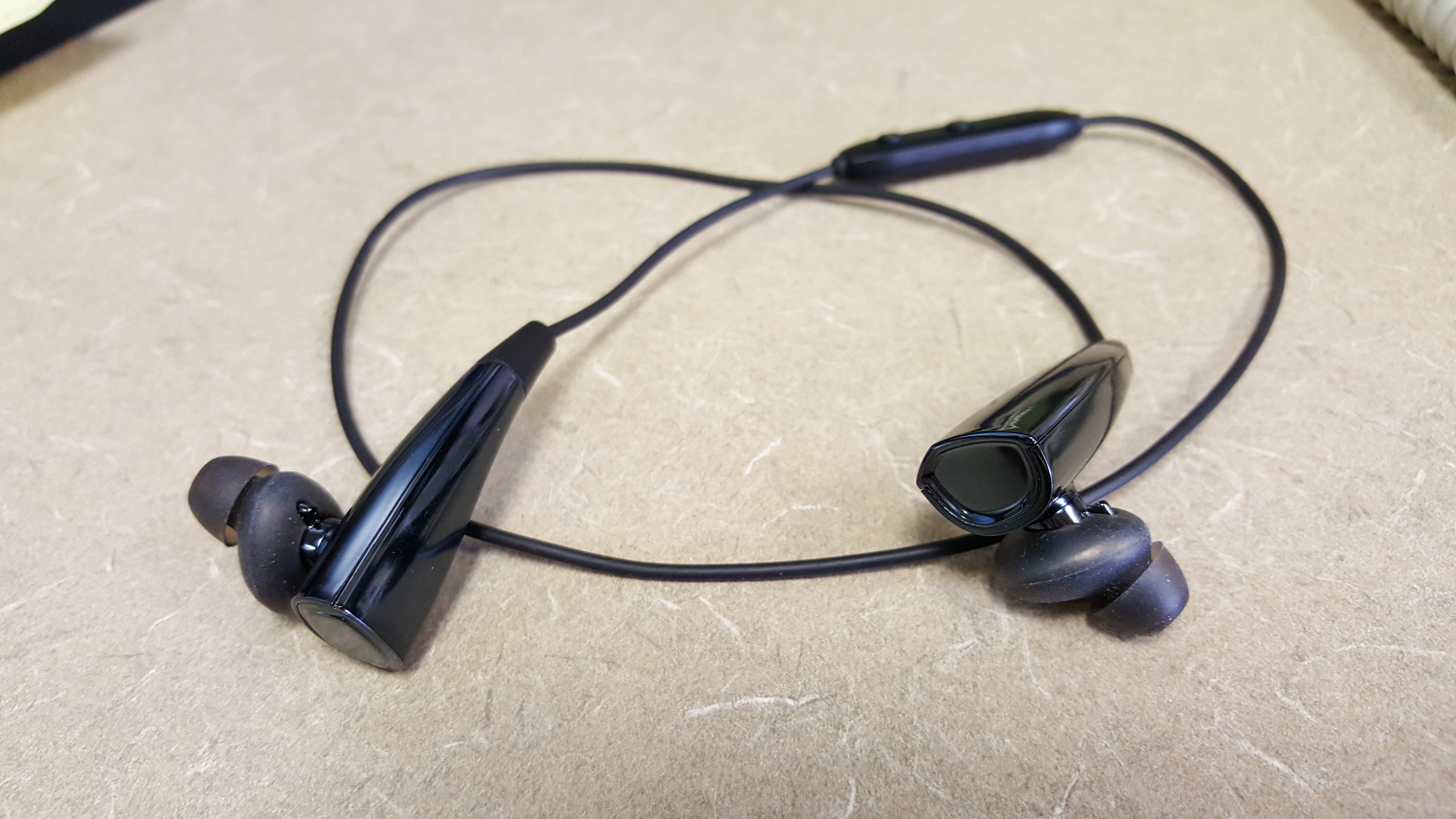 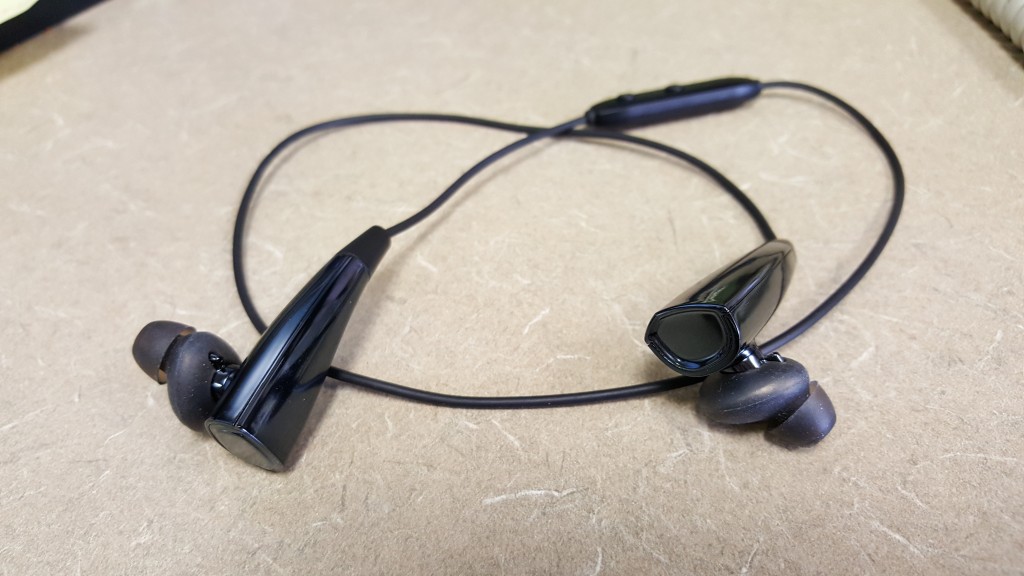 The practicality of playing music while exercising or doing basically anything else without worrying about cords is almost immeasurable. I find myself playing music through Bluetooth headphones nearly every day, so I was intrigued by Coulax’s Magneto Bluetooth in-ear headphones. I had the chance to use them for a few weeks, and I must say I am impressed on several fronts. 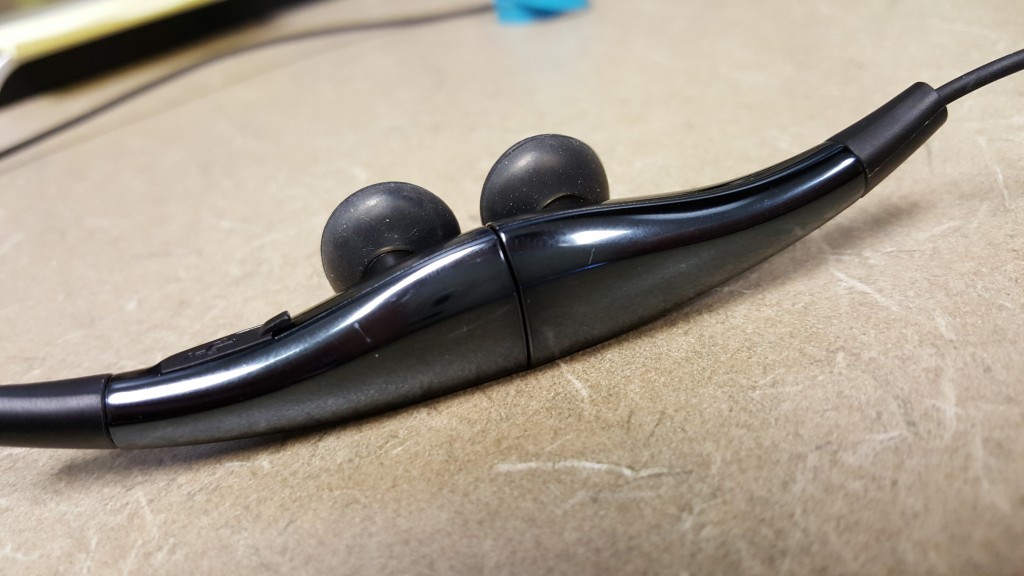 The look and feel of the Magneto headphones scored major points in my book. The headphone casings are made from a shiny plastic that actually resembles a metallic material. At first glance, they look like metal headphones. I thought of Samsung’s older Galaxy S devices that used shiny plastic in lieu of actual metal, and I was impressed that Coulax managed to do the same thing and still make the device look premium.

Coulax sells the Mangeto headphones in either white or black (I used the black version), but the design and materials remain the same regardless of color. I will say that the black headphones look very sleek and simple, and I love how few lines there are in the casing. With so many plastic Bluetooth headphones featuring complex designs on the market, it is nice to see a more minimal variation on this kind of device.

The headphone housing itself is fairly standard, and the earpiece sticks out just enough to comfortably fit into your ear without the housing causing any discomfort. The true stand-out feature of the Magneto headphones can be found at the end of each housing. Coulax found a way to insert a small magnet in each end, so that the left and right headphones could magnetize together, hence the Magneto namesake. The magnets also serve as more than just a neat way to keep your headphones from falling off your neck when they aren’t in use, but I’ll get into that in more detail later.

The cord connecting the two earpieces is roughly 18 inches long, which I found to be a near-perfect length. There is just enough excess cord for me to look in different directions, but not so much excess that I feel the need to hide it away to avoid getting it caught on something. 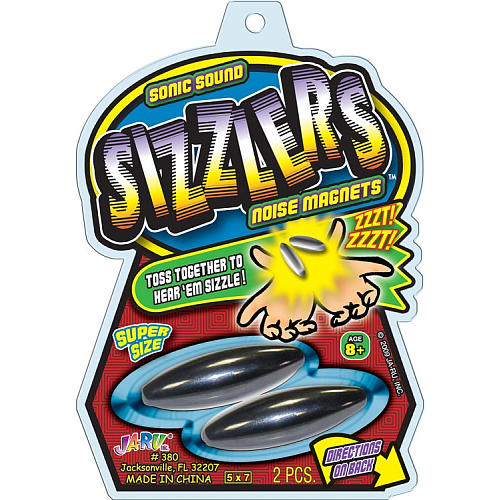 After using them for a few days, I kept wondering what I specifically liked about the design, and it finally hit me that they reminded me of those “noisy” oval-shaped magnets I played with as a child. I am not sure if this was an intentional design choice, given the built-in magnets and the name, but Coulax definitely won me over with a little nostalgia here.

The only moving part on the housing is a rubberized protective cover for the charging port. Thankfully these headphones charge via MicroUSB, so you won’t need an extra proprietary cord. Coulax also includes a MicroUSB cable in the packaging, along with an extra set of earbud covers, a manual, and a small carrying bag. 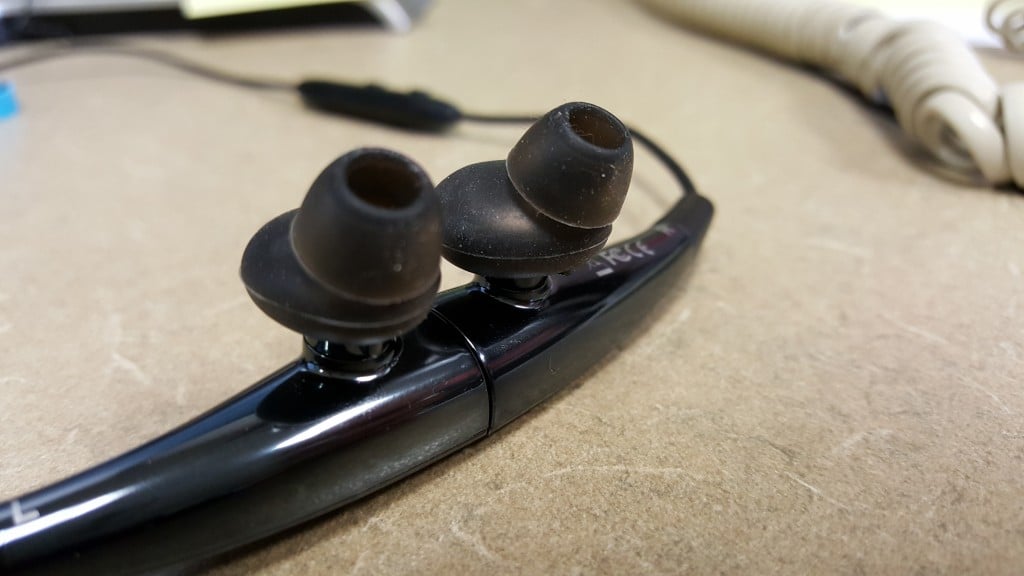 In-ear headphones, especially of the Bluetooth variety, all face two important questions: how do they fit, and do they stay in your ear? I can say that the Magneto headphones provide one of the best fits out of any pair of headphones I have used. After swapping out the default rubber tips for the smaller set, I had no trouble getting the headphones to fit perfectly. I was able to get a great seal every time I used them, and there was almost no effort involved.

Not only did the Magneto headphones fit well, I had no trouble with them falling out of my ears in the entire two weeks I used them. I wore them while riding my bicycle through the city, and they survived my hitting bumps and constantly turning my head to watch for traffic. Coulax markets these as “sport” headphones, and they certainly live up to that name. I would be remiss not to mention that the rubberized tips of the earpieces tend to pick up tiny pieces of lint and dust, but this seems to be a common issue with most rubber earpieces. 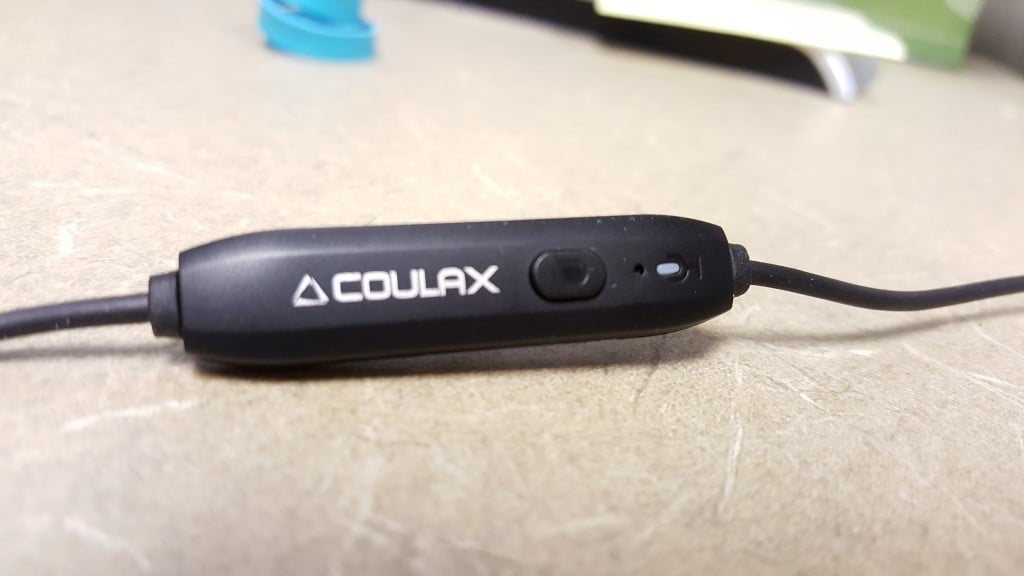 Beyond the fit and stability, I found these headphones remarkably easy to use. The inline controls are fairly standard: volume up and down buttons on one side, and a multi-function power button on the other. A long-press of the power button turns the headphones on, and if you hold it for just another second or two, the indicator light will flash red, which signifies that the device is in pairing mode. A simple trip to your smartphone or tablet’s Bluetooth menu and a tap on “Coulax” in the device list is all it takes to pair the Magneto headphones.

I paired these headphones alternately with a Samsung Galaxy S6 and an Amazon Fire 2015 tablet. I had no issues with pairing or dropped connections at any time, although I did notice some stuttering in playback when connected to the Fire tablet. I attribute this more to the Fire having an average quality Bluetooth radio and less to the connectivity power of the headphones.

Of course, the power button serves as a Play/Pause/Answer Call/Hang Up button, and a double-click activates Google Now voice search on the connected device. Holding down the Volume Up or Down buttons will skip to the next or previous song, respectively. There is nothing fancy here that isn’t expected from nearly any pair of Bluetooth headphones. 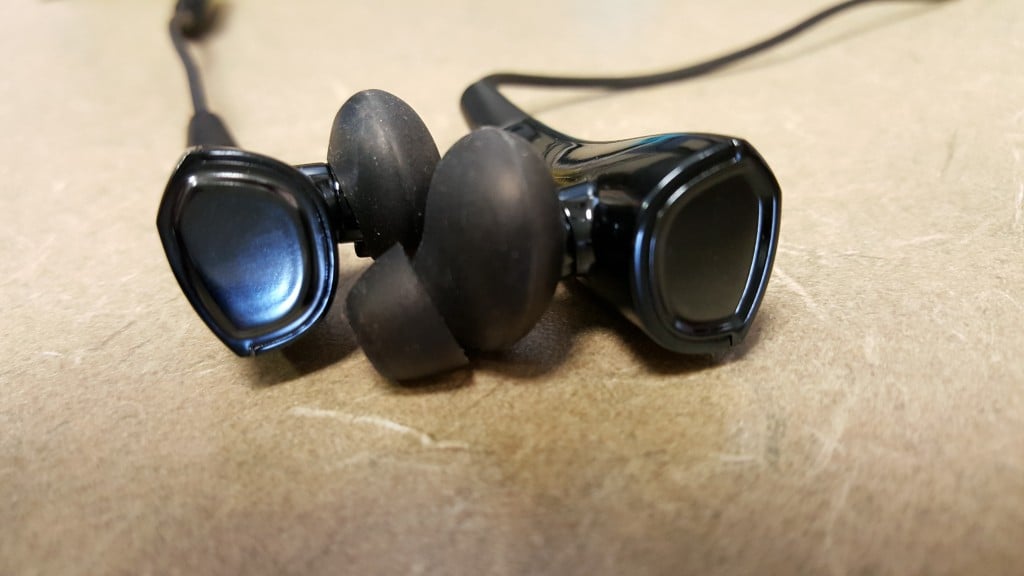 My favorite feature of the Magneto headphone is by far the magnet-driven controls. I mentioned that the housings have magnets at each end, and that they fit together to hang safely around your neck. Coulax found a way to take this even further by integrating some simple controls that are activated by the magnets.

If you are playing music or talking on the phone, and you put the magnetized ends together, the headphones will automatically pause the song or hang up the call. The same effect is (theoretically) achieved in reverse as well: pull them apart, and the music plays or the call is answered. I can’t begin to describe how useful this feature is, especially if you are exercising or riding a bike. The ability to just take the headphones out of your ear and stick them together without worrying about the music continuing to play is so convenient that I am amazed it isn’t used in other headphones more often. 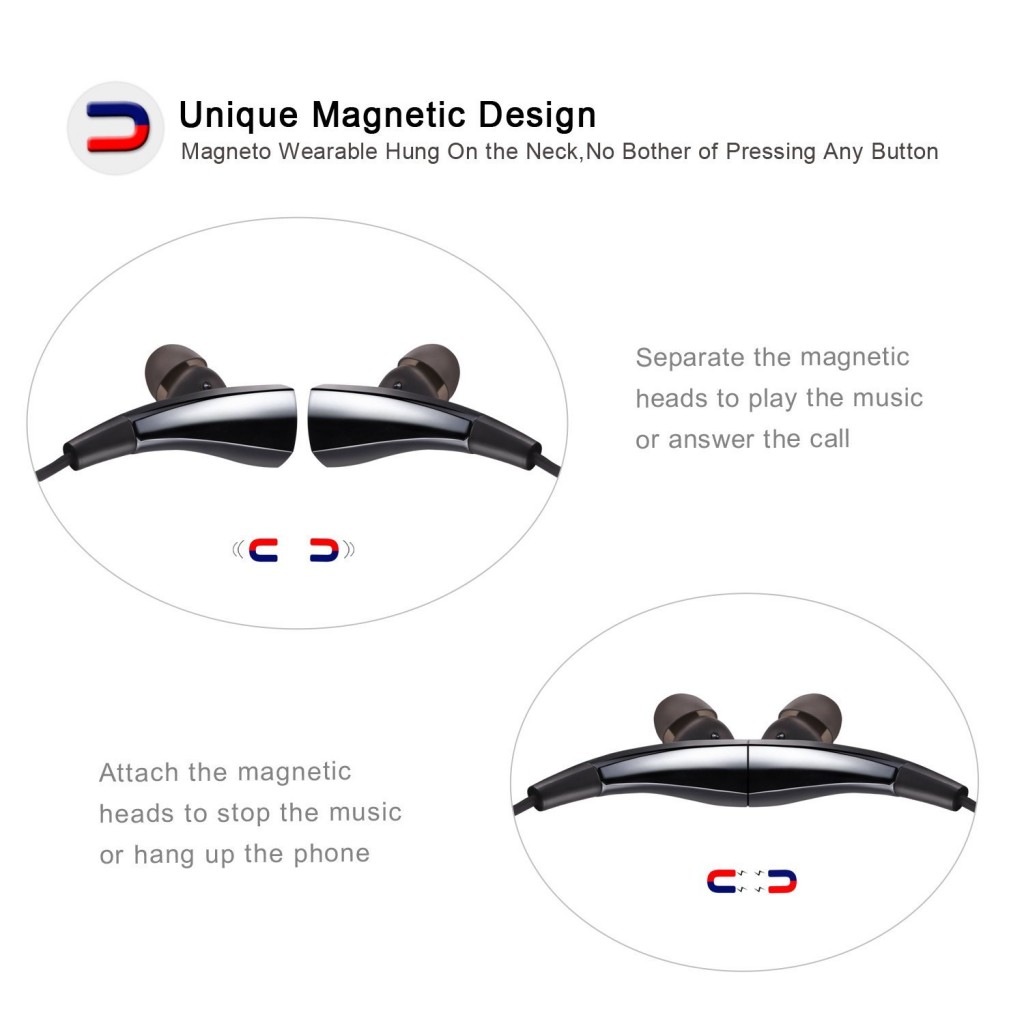 However, I found that the pull-apart-to-play feature just didn’t work in practice. For some reason, the headphones pause when the magnets are connected, but they don’t play the music again when pulled apart. At first I thought this was by design, but after reading through the manual and reviewing the Amazon page, it’s clear that Coulax meant for the feature to go both ways. I was disappointed that this feature didn’t work, but it certainly wouldn’t be a deal-breaker for purchasing these headphones.

Coulax claims roughly eight hours of playback time and 160 hours of stand-by with the Magneto headphones, and I found that to be mostly accurate. I used them for a few hours every day over the course of two weeks, and I only had to recharge them three or four times. They were on standby for a considerable amount of time, but this didn’t seem to have a major effect on battery usage.

It is worth noting that I ran the headphones through a battery torture test of sorts, playing music nonstop on a full charge. The battery lasted 7 hours and 16 minutes, which isn’t too far from Coulax’s proclaimed eight hours. Overall, the Magneto headphones did very well with battery life. 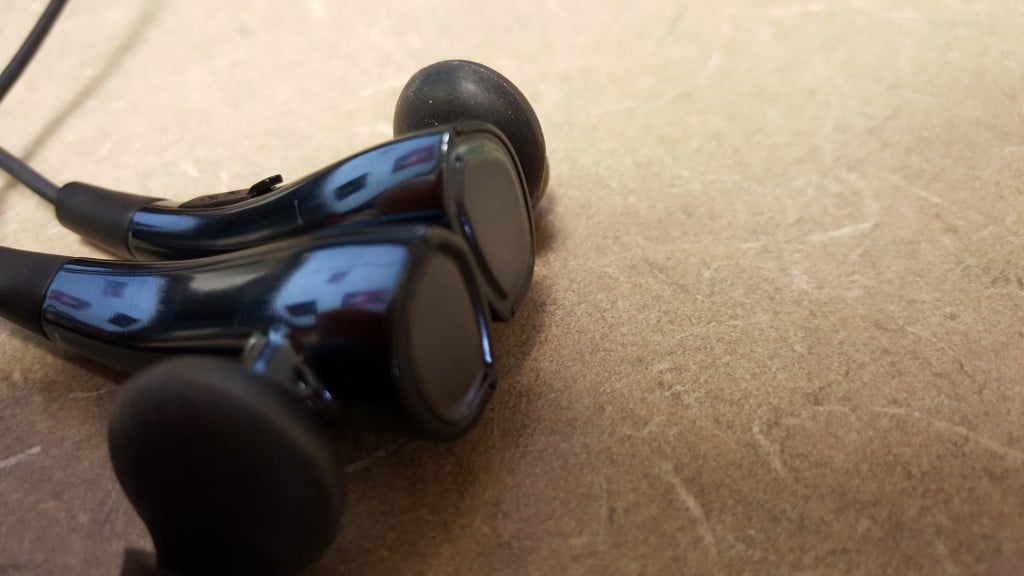 I was surprised by the sound that these little headphones brought to the table. Coulax clearly worked on the drivers and audio hardware to provide the best sound experience possible. The noise cancellation works perfectly, and even riding my bike through a crowded busy city wasn’t enough to interfere with my music or phone calls. The sound is clear and crisp, and while it won’t blow any socks off with bass, it still does above average for lower notes.

I tried to play music and audio of all types: YouTube videos, Netflix movies, music of every genre, etc. No matter what I threw at the Magneto headphones, I got consistent, clear sound every time. Coulax built them with “Hi-Fi sound,” and my impression is that they definitely did something right. Highs are rich and not too distorted, even at higher volumes. Bass is tight and the mid-range sounds are very smooth.

For in-ear headphones, I was pleased with how loud they can actually get. Even playing the softest, quietest song in my playlist was no problem for the Magneto headphones. 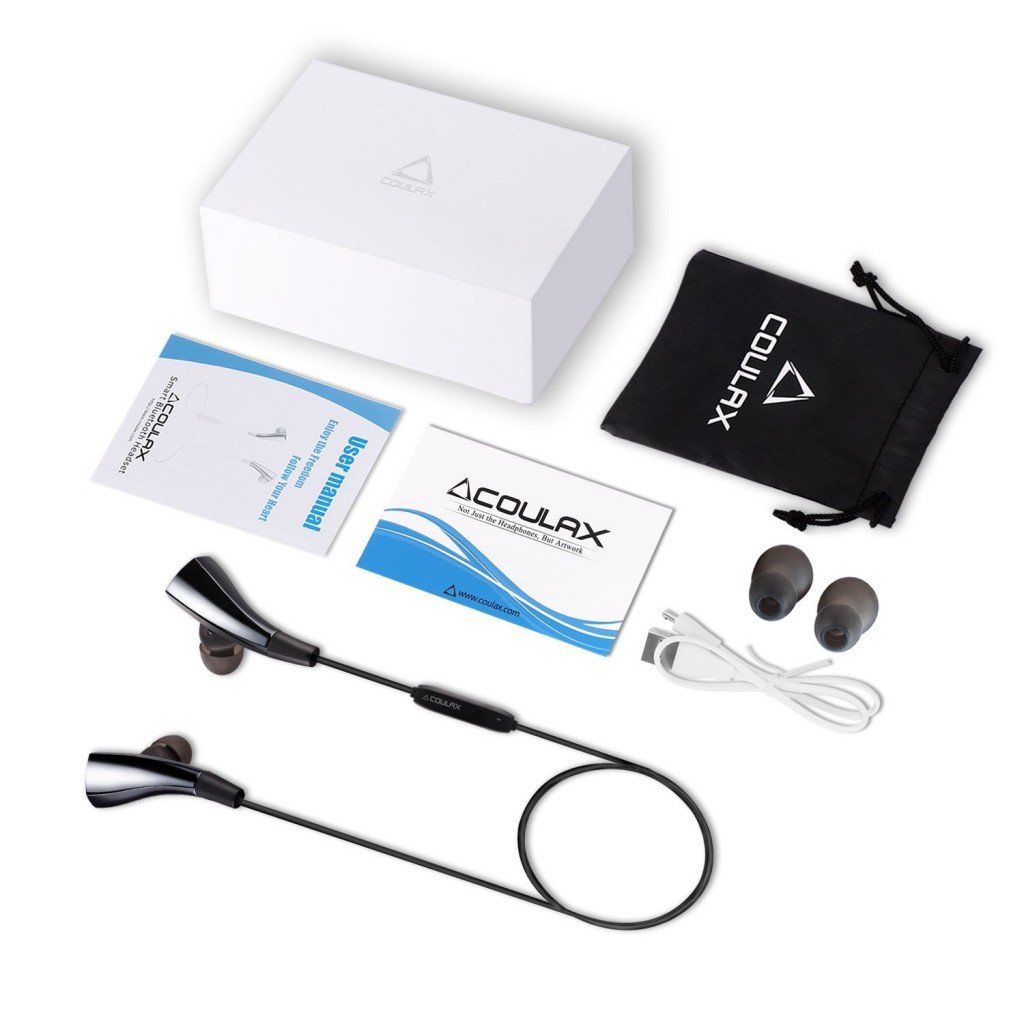 The Magneto headphones are simple, convenient, and they work exceedingly well for a product in this category. For only $29.99 (Amazon), Coulax has made a great product with multiple use cases and a few unique features thrown in just for fun. Sound is excellent and everyday usage could not be easier. There is virtually no setup required, and the battery should get the job done for most people. They won’t blow your mind, but for the average user who wants to listen to music on the treadmill, they are definitely worth a look.