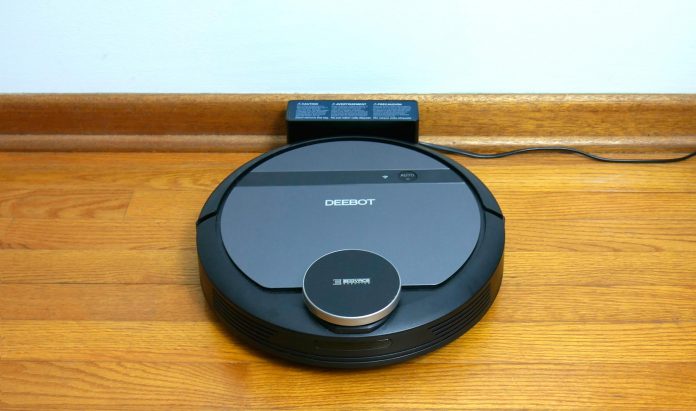 A few weeks ago I adopted the Ecovacs Deebot 901 when it arrived on my doorstep. I lovingly named it Suckatron and quickly realized it would become an essential member of the household. Before we go any further, I do want to mention the Deebot 901 was provided to us by Ecovacs but these are my unbiased opinions about it.

However, I have to admit between the performance, the app, and support for Alexa and Google Assistant I love this thing. So, that might make it a little difficult to stay unbiased.

There is nothing particularly unique about the design of the Deebot 901, then again you could say the same for most robovacs. They all use a very similar design and it can be difficult to tell one from the other. The one design element that does stand out is the Laser Distance Sensor at the top. This is not an exclusive feature to the Deebot 901 though as there are other units on the market that use this or something similar.

The sensor on the top is not the only smart feature, it also includes sensors on the bottom to detect ledges such as stairs to prevent it from falling. In my usage, I also found this works if you pick it up and causes the Deebot 901 to power down. The front bumper also acts as another sensor to help it find boundaries. Hidden under the top compartment are the power switch and WiFi button along with the dustbin. The built-in handle makes removing the dustbin easy but there was often a little fuzz and dirt left at the opening I had to remove manually. The Deebot 901 features some large wheels that extend and offer good traction. I was able to see it transition easily between carpet, hard floors, and power through over rugs after becoming caught on the corner. There will be no worries if you have area rugs or large thresholds in your home.

The Deebot 901 is a WiFi connected robovac and as such takes a little more work to set up. No worries though, it is actually quite simple. If you’ve ever set up a smart speaker then the process is very similar. You just have to get the Ecovacs app and run through the quick start guide to get it connected.

The Deebot 901 will boot up and connect to your phone where you can quickly and easily connect it to your WiFi network. Afterward, you will be able to control it through the app.

The app works great and is pretty essential to working the Deebot 901. As I mentioned above the app is used to connect it to your WiFi network, but is also capable of much more. In order to begin the Deebot will have to run once through your entire home to map it.

While the Deebot 901 runs you get to see it map come to life in the app. Watching as it reveals walls and furniture, and then bumps into them to confirm. Which for a geek like me was just amazing. I was obsessed watching Deebot traverse the house and fill up the map as it went along.

Seeing how it detected the walls and barriers around my home and watching as it would slow its approach and then tap it to be certain. I also got a few good laughs as it would tap objects repeatedly and try to work its way around obstructions. I marveled while watching it through the app and followed it around the house, seeing as gray areas transitioned to white filling up the floorplan.

Back to the app though, after the first run you are left with the floorplan for your entire home that I’m still geeking out over. Not only because I have a full floor plan for the top floor but because the Ecovacs app actually creates zones automatically afterward.

With these zones, it is easy to send the Deebot 901 to only clean certain areas of your home without making it do a full pass. There is also a way to create custom cleaning plans sending it to several of the areas if you’d like.

While I love the zone function and that it automatically creates them I wish it would allow us to name the zones to use in conjunction with the voice commands. Having the ability to use Alexa or Assistant to ask it to only clean the kitchen or the living room would be very helpful. While at this time the voice commands can only be used to have it clean the entire house or nothing at all.

Another ingenious feature in the app is the ability to create virtual barriers. This really came in handy to prevent the Deebot 901 from entering areas where it might suck up cables or knock over items. Unfortunately, the first time you run it you cannot use this feature and need to keep an eye on it. I had to rescue it a few times when it tripped up on a couple of cords and some rubs with tassels on the ends.

However, after the first run, I was able to set up some barriers and make sure it would only focus on the high traffic areas and not run into any trouble. If you happen to have some frayed rugs in your home they suggest to tuck them under, but I found this didn’t prevent hang ups, only minimized them. For that reason, I choose to block off those rooms and only send it there if I can supervise it.

Scheduling is a fantastic feature allowing you to set a time and day each week for your Deebot to run. This is the perfect way to make sure that you come home to a clean house by allowing it to run when no one is home.

One improvement I wish I could see to this feature would be the ability to schedule it to clean only certain zones. Then you could have it clean high traffic areas more frequently and other areas like your bedroom less frequently, instead of the whole house each time.

While the Deebot 901 helps you by vacuuming your house automatically it does come with a little work. Occasionally you have to perform some maintenance on it including emptying and cleaning the dustbin, filters, main brush, and side brushes. It is also recommended that you clean the bumpers, drop sensors, and charging contacts.

On top of that, you’re supposed to also replace parts on it such as the main brush, side brushes, and filter. The app provides you with a timeline based on your cleaning history to alert you when it is time to change these.

Let’s take a second to talk about the voice controls with the Deebot 901. It is oh so satisfying being able to boss around your robot servant through voice commands. While I loved the app and I would still pull it out to check where it was cleaning or the progress. Having the ability to ask it to start cleaning with only a simple voice command is extremely gratifying.

That doesn’t mean there aren’t a couple of issues, however. For example, from reading reviews for the Alexa skill it appears the skill only supports one vacuum. Meaning if you have two floors in your home and want to use two vacuums, you won’t be able to control them both. As someone with a home that has two floors that is very disappointing and honestly makes me think twice about getting a second one.

The Google Assistant skill wasn’t without its own issues. If you try installing and linking it from the Explore menu in the Google Home app it refuses to work. Instead, you must enter the Home control menu and add it within there. I don’t think Ecovac takes the blame on this one though, it seems to be more of an oversight in the Google Home app.

How Well Does it Clean

The Deebot 901 has two different suction levels. For the first few runs, I let it use the standard level and was shocked at how much it picked up. I was able to fill the entire dustbin both times with only a day in between cleanings. On the first run there was even some dried grass and a leaf I had brought in on my shoes and without skipping a beat it sucked all of it up. For this reason, I think it would be best to run a regular vacuum once a month or so for a deep clean. While allowing the Deebot to keep the floors looking good in between.

Not Perfect for Homes with Two Floors

Having the ability to transport the Deebot 901 between different floors in your house with saved maps would be ideal. As for now, you can only have it save the map of one floor of your home and for the other floor you have to let it run on auto mode. Even if you were to buy two of them you’d still be left unable to manage both with voice commands.

At the end of the day spending $400 for a robovac is a little on the pricey side. However, it is not unreasonable for such an advanced device. There are cheaper ones on the market, but they don’t offer the extensive mapping system and smart features that come with the Deebot 901.

Except for a couple of mishaps on the first run where the Deebot got snagged on some cords and the frayed rugs, I was thoroughly pleased. The Deebot 901 has changed the way I’ve cleaned my home and saves me a great deal of time.

They say money can’t buy happiness but this does buy you more time, and with that extra time you can spend it doing activities that make you happy. In this way, by spending $400 on this robovac you are indeed buying some happiness. Unless vacuuming is what makes you happy. If you’d like to adopt one of these into your very own home then hit the link below.