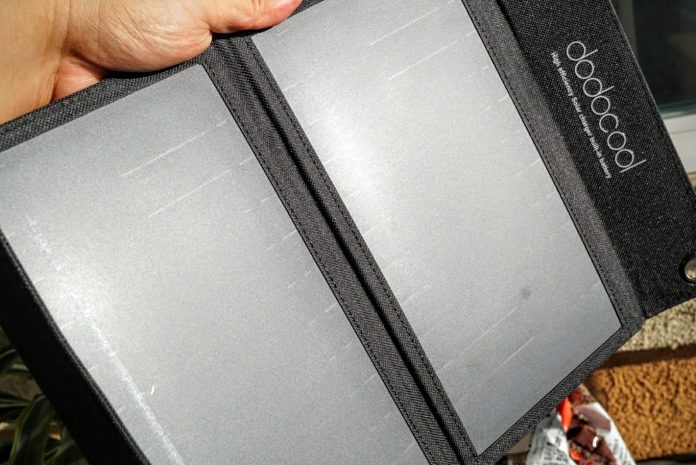 According to NASA, the Sun generates 386 billion megawatts of energy which is released as light and heat. The most powerful nuclear power plant in the US produces a meager 3,937 megawatts, where one megawatt powers about 1,000 homes. The point is the sun is a great source of free and powerful green energy. Not even nuclear power compares to the energy we fail to harness from the sun every single day.

Harnessing the Sun’s natural energy has become more mainstream and solar panels are now lightweight and efficient enough to power mobile devices. I’ve been using the dodocool Solar charger with a built-in 10000mAh battery pack and think it’s a solid option for those who sometimes need an alternative to wall outlets. 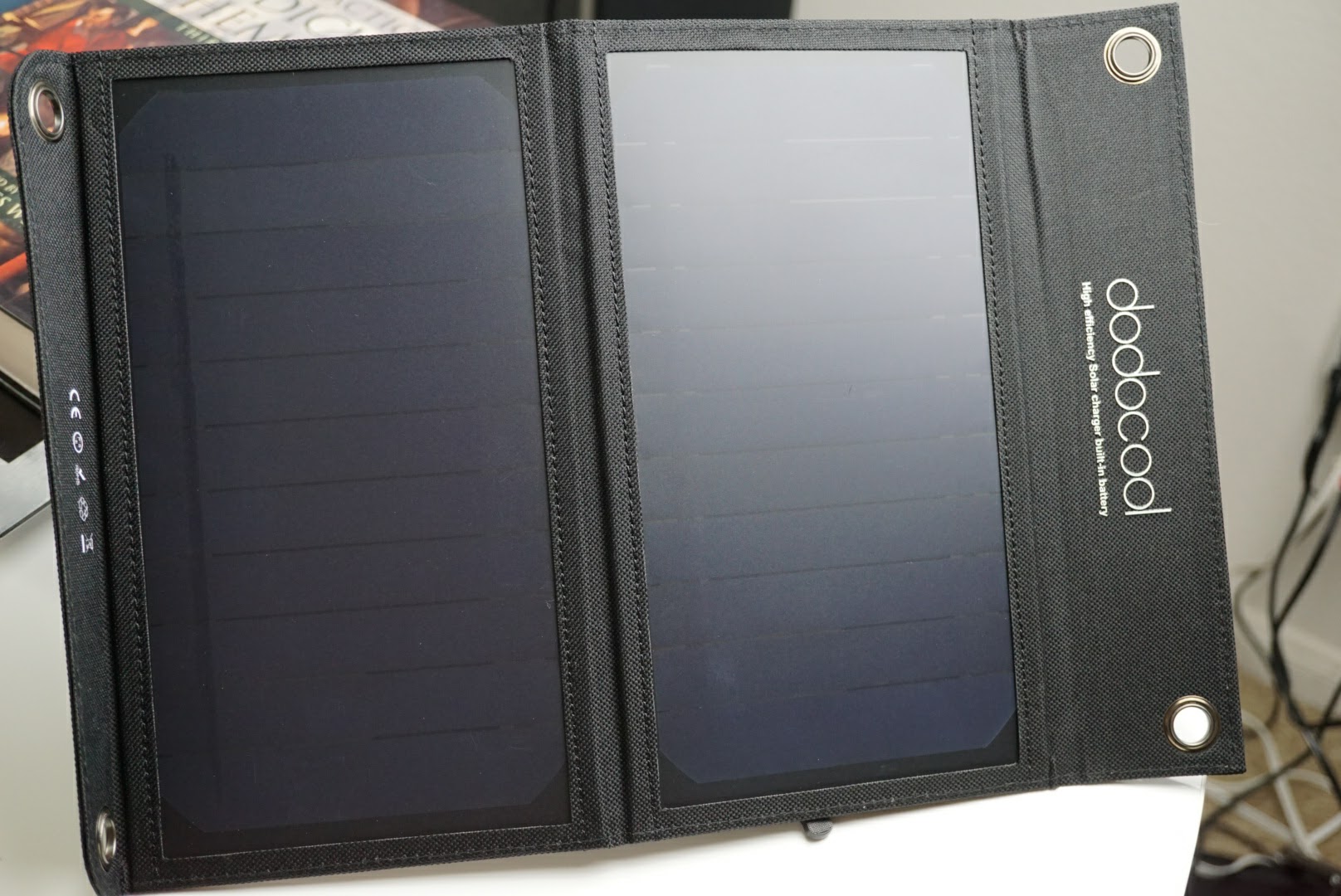 The dodocool solar charger is mostly made of a durable ballistic nylon that folds up into a binder sized package. It has two solar panels that manage to draw in 12W of power with full sunlight and outputs the power in the form of dual USB ports at 2.1A (total). This solar charger from dodocool is one of a few with an actual built-in power bank, as many others that cost the same price or more simply have the charging panels with USB out ports. 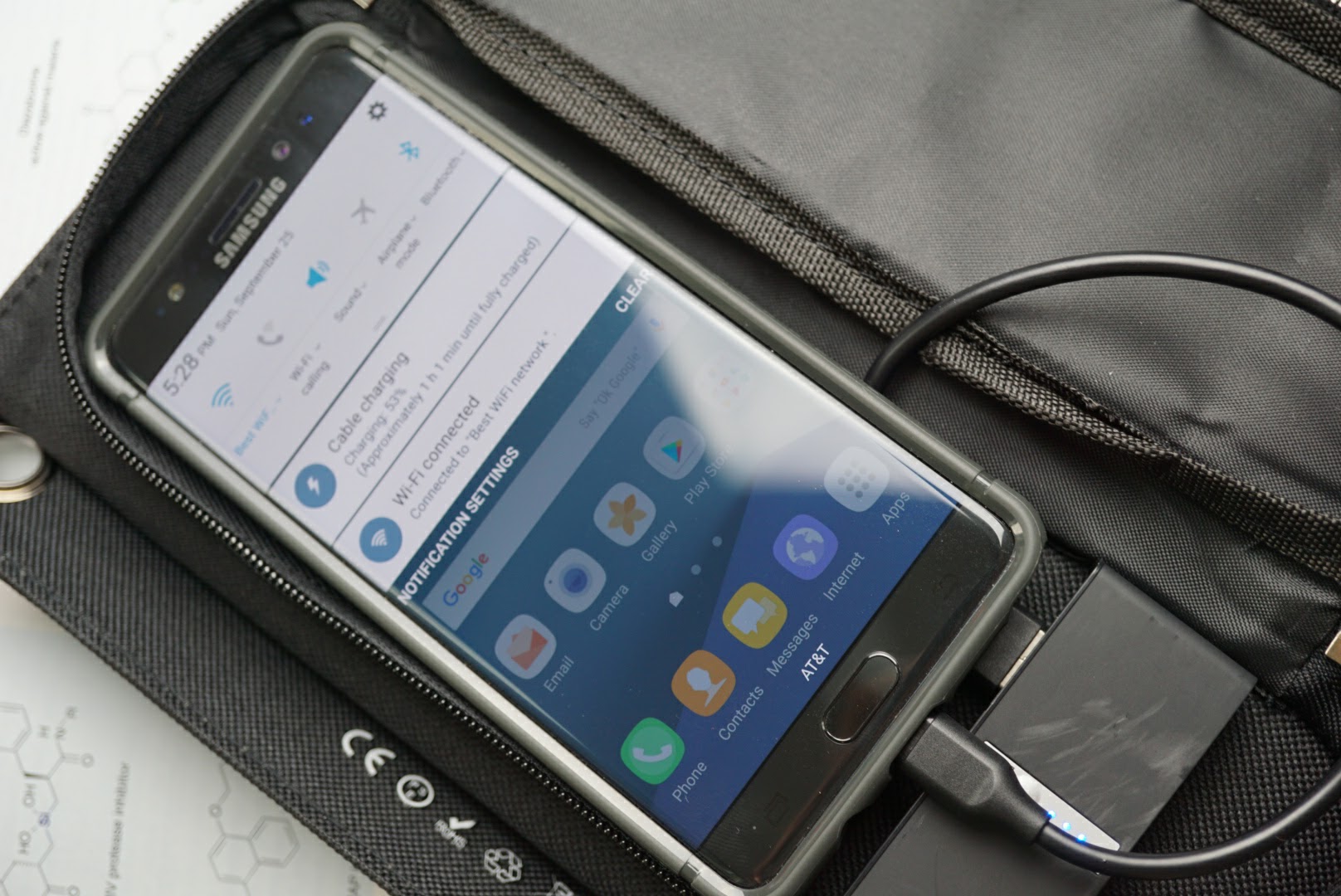 Solar panel technology does not convert all of the sun’s power into electricity, and the dodocool charger converts it at 22% efficiency. That’s generally the norm even for home solar panels. 2.1A is certainly not enough power to charge Android devices at Quick Charge speeds, but it is fast enough to charge the entire battery bank in a full day of sunlight. Similar to home panels, if there are clouds or shade, the panels will not convert the sun’s power into electricity.

The dodocool solar charger is significantly better than those without power banks mainly because you do not need to leave your portable devices in full sunlight to charge. Leaving your smartphone, especially metal ones like those from HTC or Apple can turn your devices to scolding hot temperatures. That’s not good for your hands and it is definitely not good for the internal components.

With a kickstand built into the back, the dodocool solar charger can easily be left in direct sunlight without having to monitor it. There is also a cable that can be adjusted to stand the charger at an optimal angle. 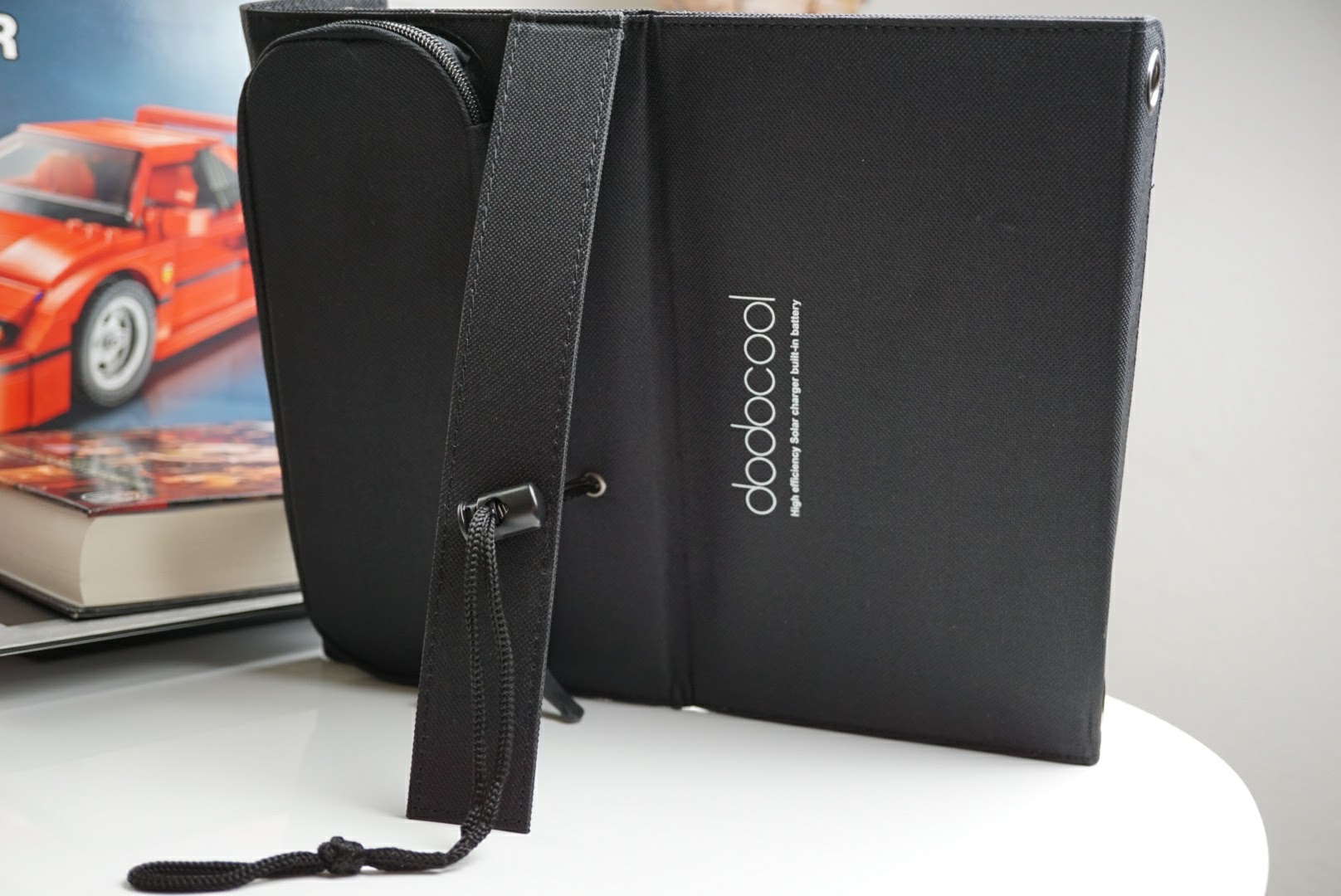 On the corners of the charging panels are metal holes which can be used to attached to the rear side of backpacks. That’s a thoughtful design for those who love to hike or backpack in the back country where solar power is the only option. 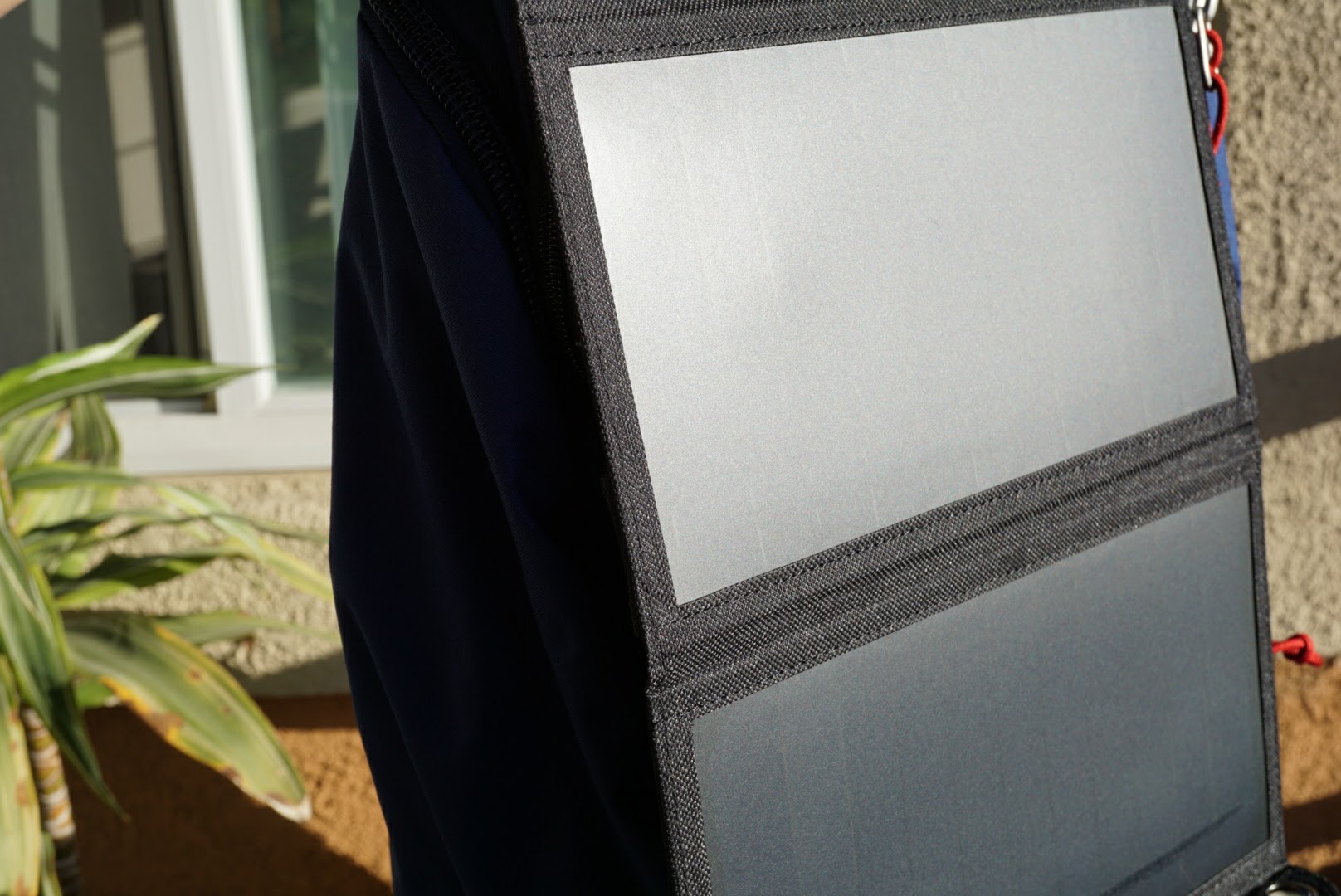 The power bank is rated at 10000mAh which is enough power to charge most smartphone 2-3 times on a single charge. My Samsung Galaxy Note 7 took about an hour to charge from 5%-50% which three quarters of the power remaining. It’s not Quick Charge speed, but it is still fast enough to be highly functional.

You never know when you might run out of power, and having the sun as a viable option for mobile devices is one that wasn’t available to me just five years ago.

I live in San Diego where sun is plentiful, so consider your climate before purchasing a portable solar charger. If you live in northern climates that see more clouds than sun, it might not be a viable option of power for you.

What’s extremely nice about the dodocool Solar charger is the integrated 10000mAh power bank. The built-in battery allows users to store solar energy without having to leave devices directly in the sun to fry. It’s a great option for those who love the back country, or for those who want a source of back up power in case of power outages. Right now it is priced at $48.44 at Amazon with discount code 25ZW7E5F and is very affordable compared to the competition.

I leave my solar charger on my patio during the day to recharge, and then charge my smartphone and wireless headphones with it at night. It’s not a huge impact on energy consumption, but it is a good place to start. I will also be dragging it along on my annual camping trips as well to power my wireless speaker and other mobile devices. 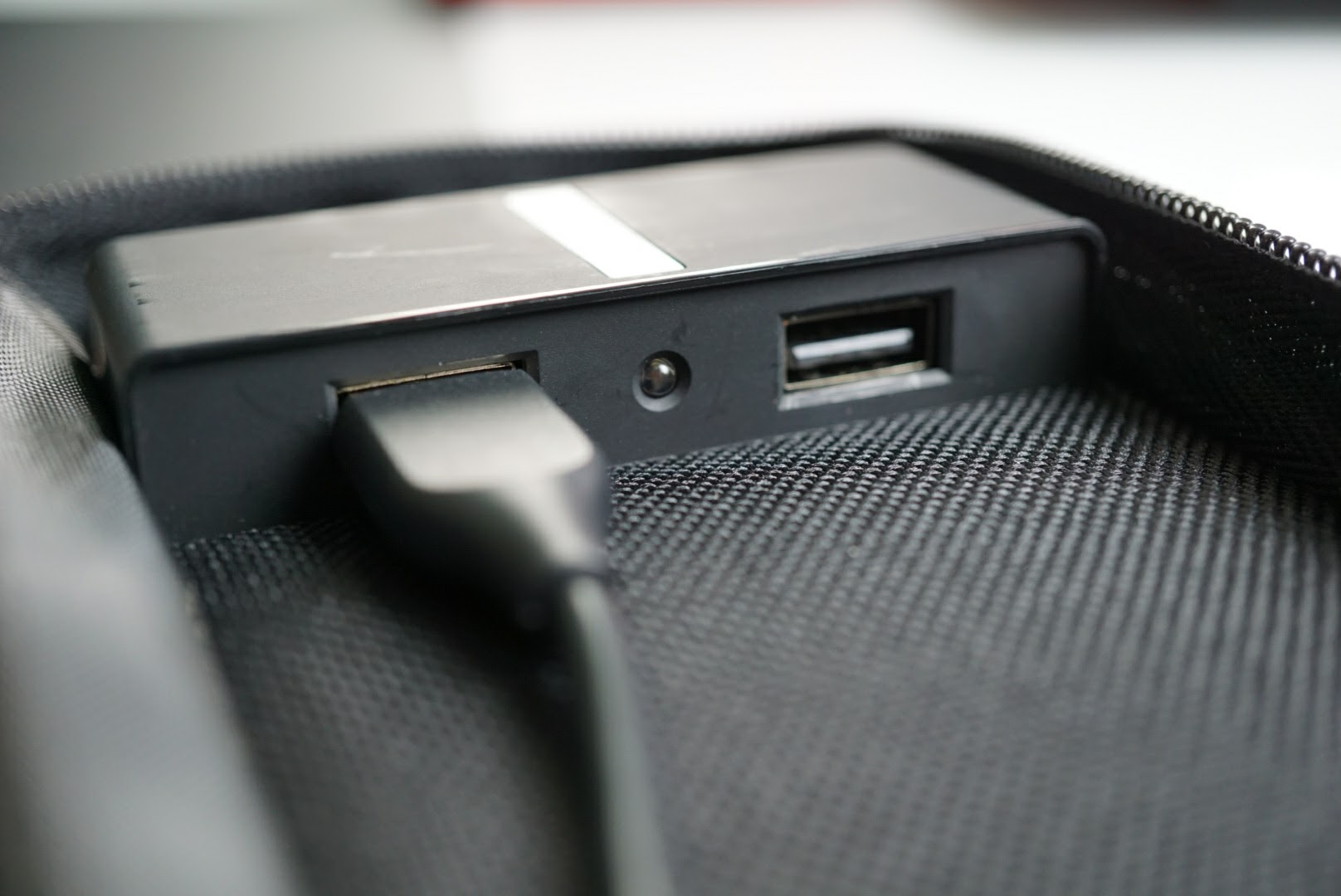