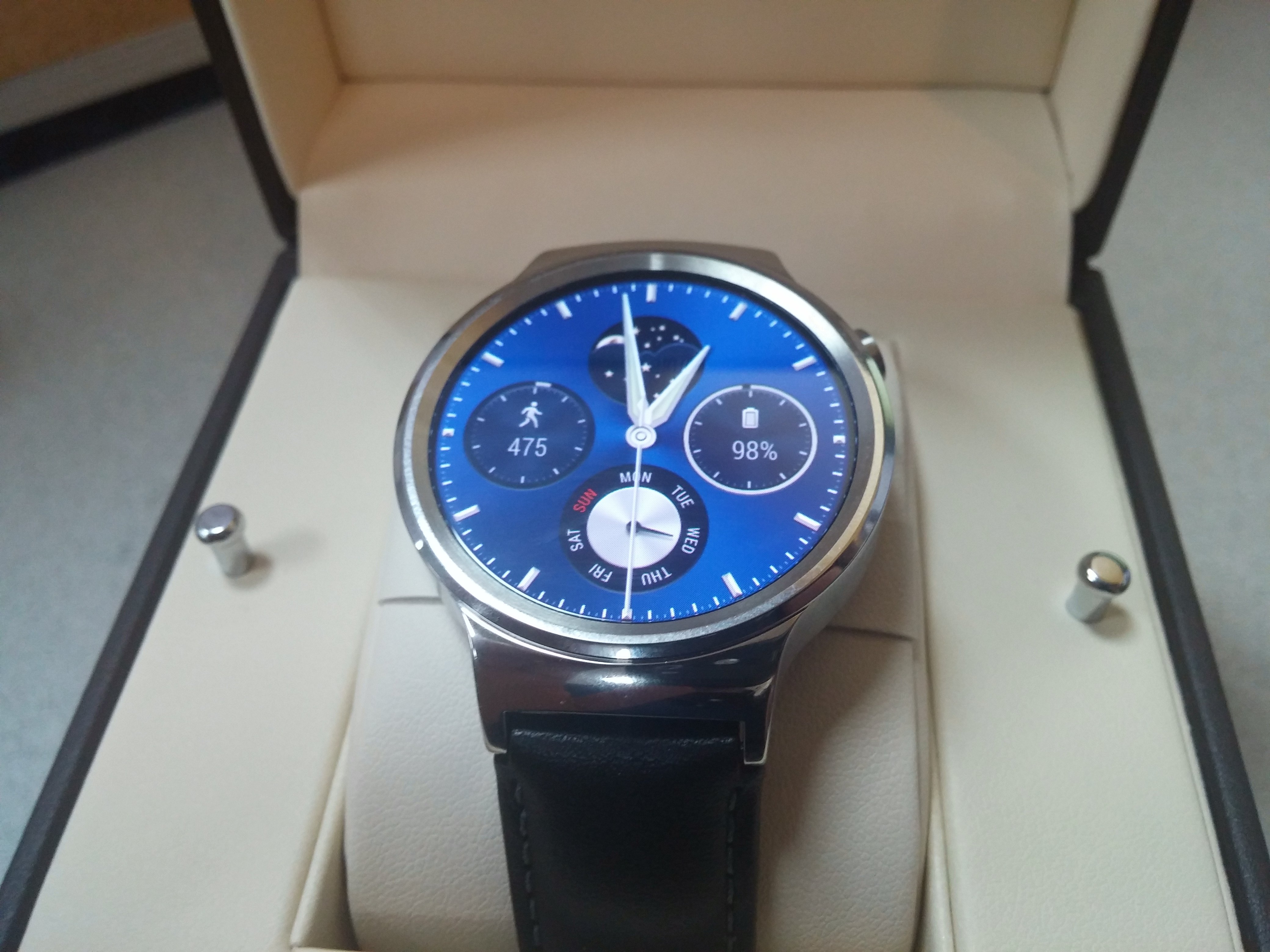 Huawei has been making quite the statement in 2015. Other than being one of Google’s partners for the Nexus 6P, Huawei has been releasing a slew of high-quality products that have been turning heads everywhere. Slowly, but surely they have been making a name for themselves, and it’s obviously caught the attention of the big boys in California.

Sporting a stainless steel casing, the Huawei Watch features a traditional round-face, with a simple button on the upper right-hand side of the watch. As someone who’s owned a Moto 360, I was interested in seeing a smartwatch take advantage of ALL the screen real-estate, without worrying about having a flat tire, that cuts off parts of the watch faces. Luckily, the Huawei Watch does not have this chin, but there’s also a glaring hole that the Huawei Watch fails to fill. 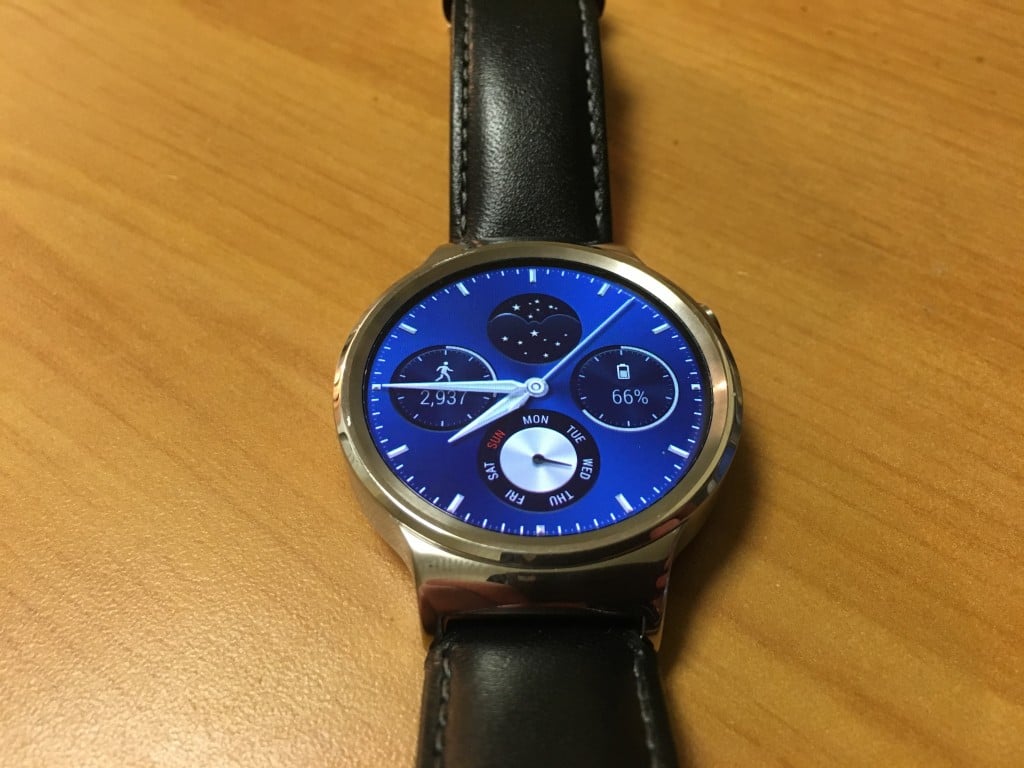 Part of why the Moto 360 has that hideous flat tire on the face, is to house all the sensors, including the ambient light sensor. Well, the Huawei Watch is without this light sensor, meaning that this smartwatch stays at the same brightness all the time. This can be frustrating, and you would think that the lack of an ambient light sensor would take a toll on the battery life, but you might be surprised.

The somewhat larger size of the Huawei Watch helps to protect your new smartwatch from getting scratched or anything, and the glass covering the watch face does the same. Made out of sapphire crystal, the Huaweai Watch provides another first for Android Wear devices, making it the first of its kind with this type of protection for your watch face. What makes sapphire crystal different from the rest, is that it’s harder than Corning’s Gorilla Glass. This will allow for you accidentally bump into something and have a little more peace of mind about whether you just cracked the face of your favorite smartwatch.

Below the hood, the Huawei Watch has a 1.4-inch display with, 400×400 resolution at a rate of 286 pixels per inch. This is the highest resolution of any Android Wear device today. Powering that beautiful, high resolution display is a 1.2GHz quad-core Snapdragon 400 processor, 4GB of storage, 512MB of RAM and a 300mAh battery. Additionally, the Huawei Watch has a few other features that help it stand apart from the crowd. 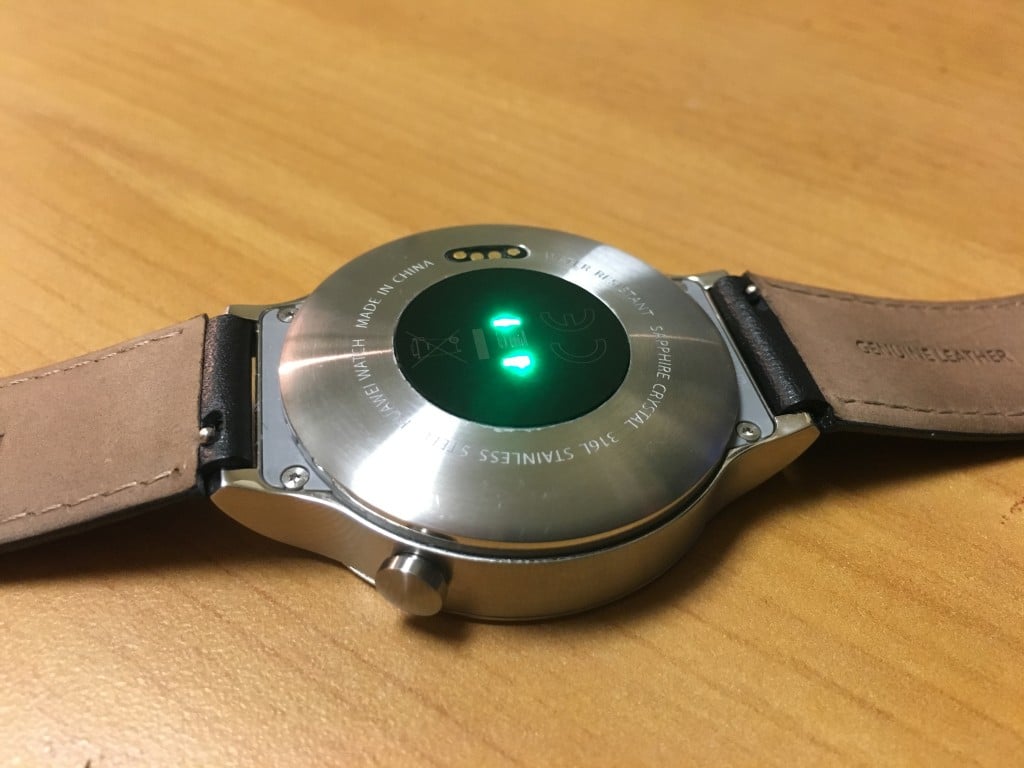 The built-in Wi-Fi will come in handy if you’re using the Huawei Watch and your Bluetooth paired device isn’t near you. That way you will still be able to get your notifications even if you’re outside of the range of the Bluetooth. With an IP67 rating, your watch will be able to withstand you taking a shower with it on, and the occasional rain-drops, but don’t play on taking this on a swim with you. The Huawei Watch also has a heart-rate monitor on the bottom of the watch, and while it doesn’t continuously monitor your heart-rate, the added functionality is definitely a plus.

Huawei didn’t really design their watch to be a “sporty” device, instead focusing more on fashion with this one. In that regard, there isn’t GPS built-in, so you won’t be able to track exactly where you go. However, you will be able to keep track of your steps, distance, and calories burned with the Huawei Watch. 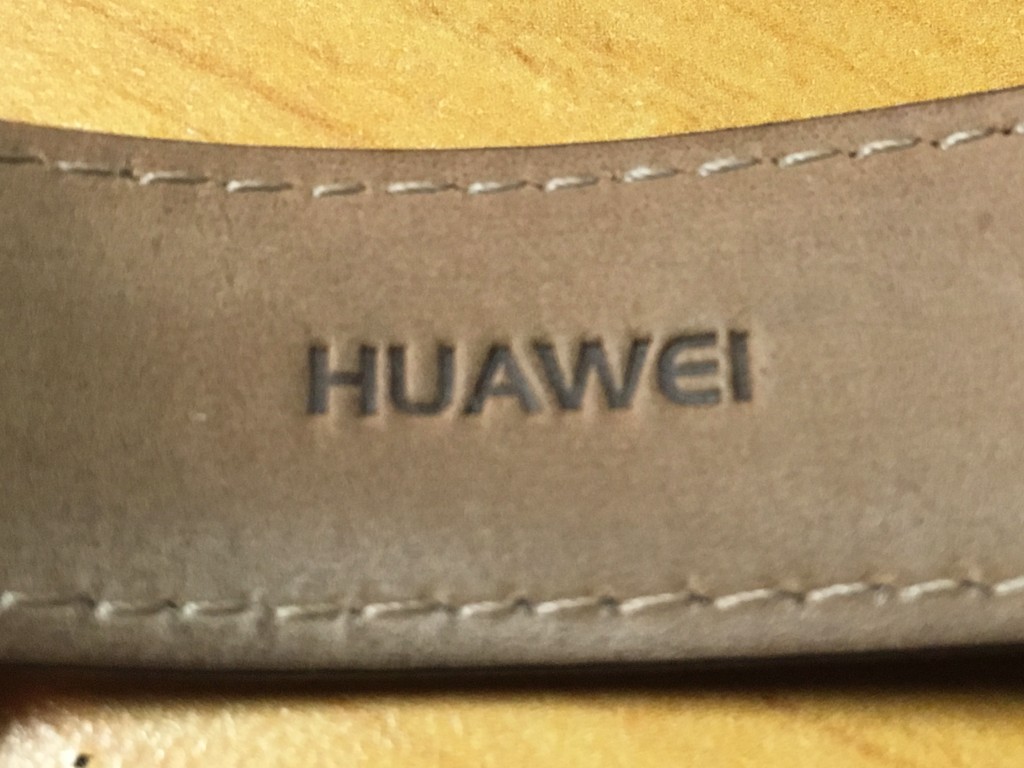 These are some pretty impressive specs, compared to other Android Wear devices that have been released in 2015. The Huawei Watch isn’t without it’s flaws, unfortunately. The casing, while beautiful and professional looking, is a bit thick and heavy. For someone with large wrists like myself, and one who usually wears a G-Shock, this isn’t really a problem at all. But we can imagine those with normal-sized wrists, running into some issues with the heft of the Huawei Watch.

Another downside to the design of the Huawei Watch would have to be the charging capabilities. As stated above, I am coming from the first-gen Moto 360 with its wireless Qi-charging. When the Huawei Watch was first announced, I was a little more than disappointed with the announcement regarding the lack of Qi-charging. Huawei opted for the pogo-pin style charging, which automatically limits the ways you will be able to charge the Watch. Maybe this has something to do with the already thick casing of the watch, but it’s an interesting omission nonetheless. 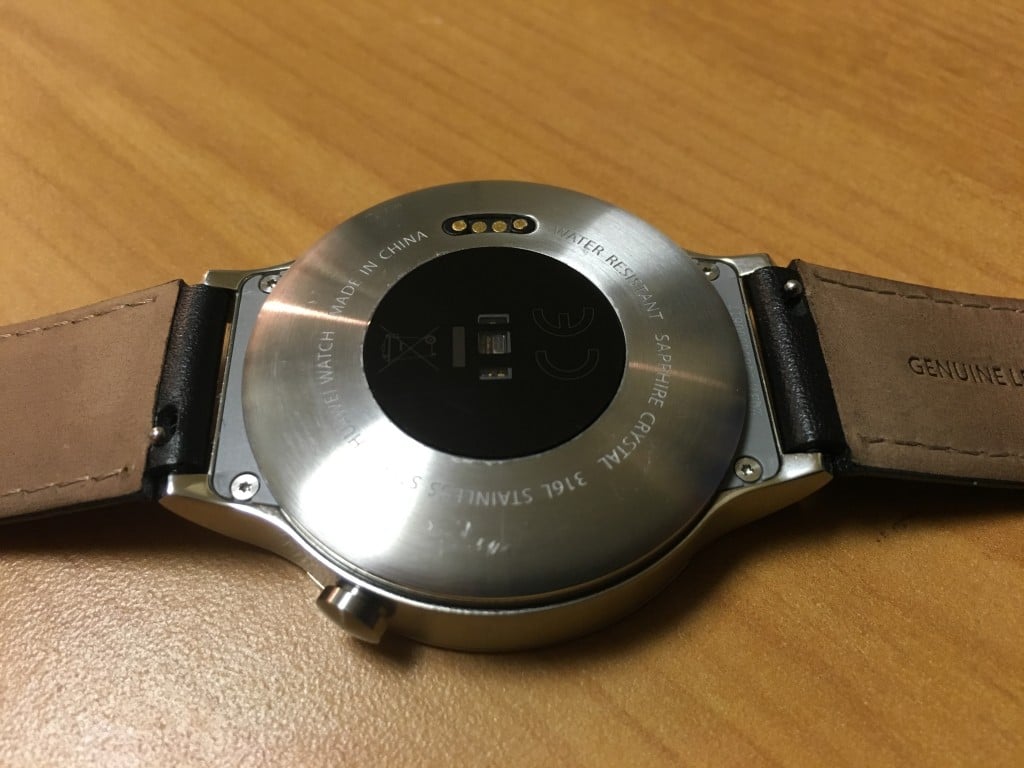 In the packaging, you’ll receive a charging cable with the pogo-plug pad for the Huawei Watch to be charged. I must admit, this was the most frustrating part of the review. There were multiple times, where I laid the Huawei Watch on the charging pad, thinking that it was charging because of the magnet in the charger, only to find out that the Watch was dead the next morning. In order to make sure I had a good contact between the Watch and the charging pad, I would pick up both the charger and the watch, and made sure that the pins were lined up correctly. 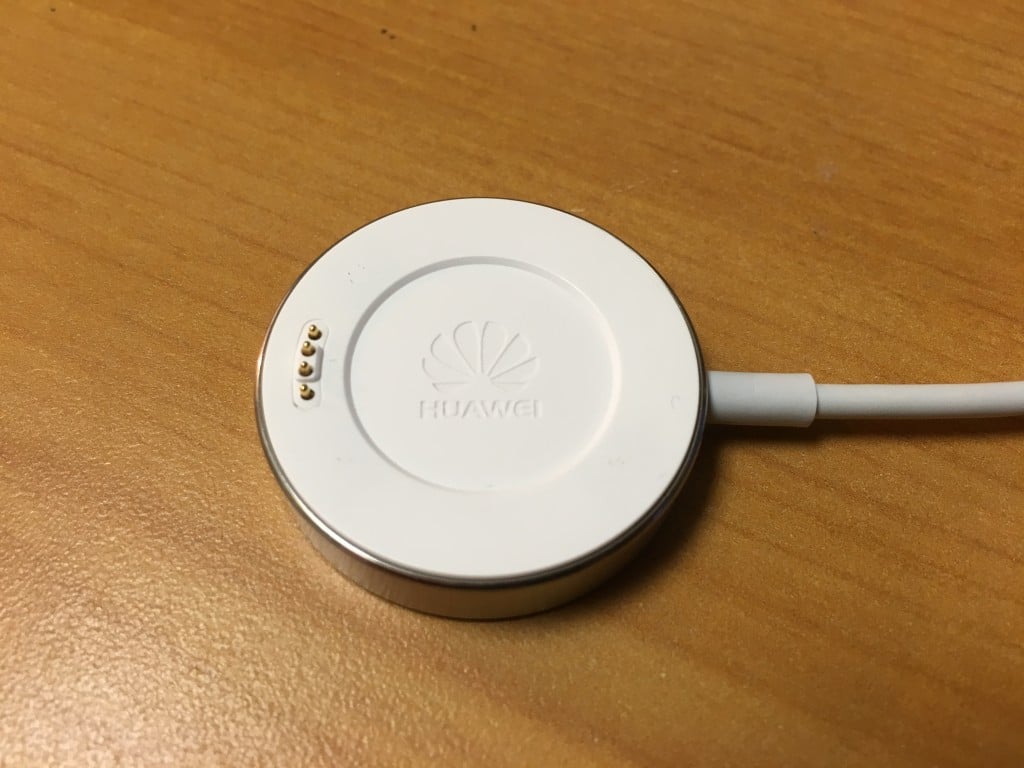 This is an area that could see some improvement from the folks at Huawei, but it’s not the end of the world either. Hopefully, since more of the world is moving towards wireless charging, Huawei will follow suit if they end up releasing an updated version in the future.

As for the battery life, I’ve taken a look at a few of the other Huawei Watch reviews, just to get a feel for what other folks have been getting and I must say that I must have the golden egg. Other reviews state that they can’t get through an entire day, let alone two, without having to recharge. This was not the case in my experience with the Huawei Watch.

After the first week, when the updates were installed, and the internal dust settled, I was getting great battery life. My work day starts at 6AM but I have to leave my apartment at about 5AM or so. I was able to get through the entire day, with heavy usage, and still have about 40% or so left over when I got back to my apartment around 4 or 5PM. With that battery life, there were times that I would be able to use the Huawei Watch up until I got home the next day.

Being able to change out the various bands is always a fun experiment, regardless of whatever watch you get. The Huawei Watch supports both 18mm and 21mm straps that can be easily swapped out at your discretion. There is a quick release tab on the ends of the band that allow for replacing the bands without any tools. No longer do you have to worry about fumbling around with swapping the bands out. 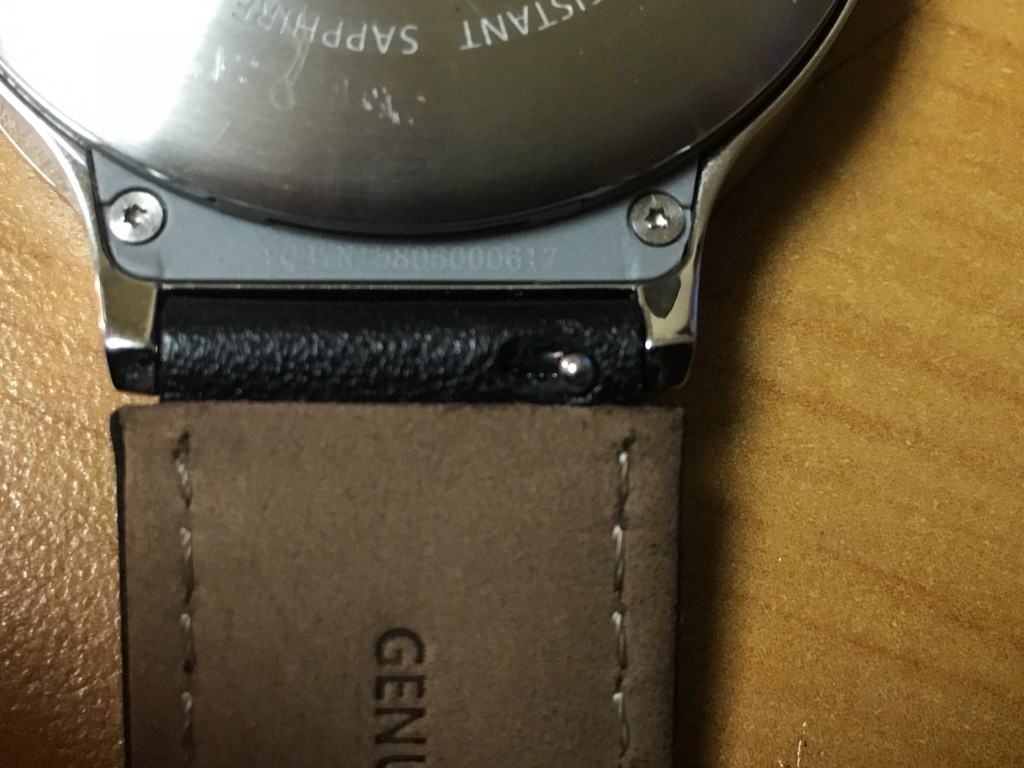 The final “gripe” I have with the design, isn’t necessarily for me, but I can see it being problematic for others. Huawei decided to not add an NFC chip within the Huawei Watch. While the casing is already thick, I can imagine there would be room somewhere to add this feature. With contactless payments, like Android Pay and Samsung Pay, becoming more and more popular, the lack of NFC is a bit of a head-scratcher. We’ll have to see if Huawei hits the mark on the next rendition.

Throughout my testing of the Huawei Watch, I paired the Watch with three different devices; OnePlus 2, Samsung Galaxy Note5, and the iPhone 6s. At the core, the software is the same that can be found on every other Android Wear device. However, the Huawei Watch comes preloaded with a boatload of watch faces, 40 to be exact. And while the face itself is fairly large, the Google Now cards that would pop up, took up too much of th screen.

There were times of frustration, where I would get annoyed with the size of the cards, and going on a swiping frenzy to get rid of the notifications. If there was a different way to view the notifications or a way to change the size of the Google Now cards, that would be pretty awesome. But that’s not the fault of the Huawei Watch, or any other Android Wear device for that matter.

Something worth taking note of, is related to the charging notification you get when plugging in your new Huawei Watch. The icon is extremely tiny, and there are times where you can’t even see whether it’s charging or not. That should be something that can be changed on Huawei’s side, and make it easier for us to tell whether your Watch is charging or not.

If you want to get this bad boy, be prepared to empty your wallets out. There are six different options you can get from either Huawei or Amazon, and the pricing ranges from $349 to $449. Here are the listed options below:

As I stated, you can head over to either Huawei or Amazon and grab the Huawei Watch. Currently, all the options are in stock, except for the option with the Stainless Steel Link Band. But if you already have an 18mm or 21mm band, you’ll be good with grabbing one of the other options and using your own. Plus, you’ll be able to save a few bucks that way.

Have you used the Huawei Watch already? What were your impressions on it, and where it stands amongst the ranks of other Android Wear devices? Drop us a line below and let us know.