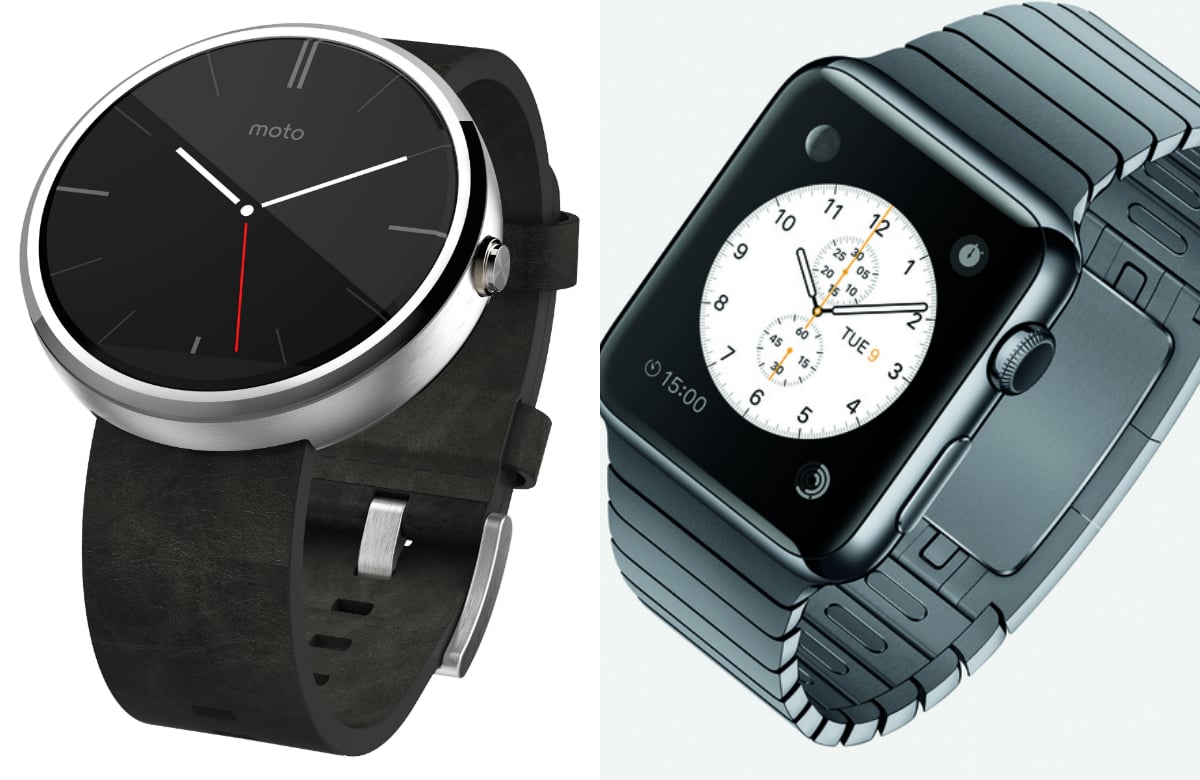 In case you’ve been living under a rock, the wearable space has grown drastically for major companies throughout the world over a few months’ time. With Google’s quicker-than-ever rollout of Android Wear and Apple’s first iteration of Apple Watch, things are bound to get heated over who can make the best device. So many companies already have smartwatches, but who stands out? Who will create the device that will revolutionize the space? Though we need to wait awhile to use one of the contender’s devices, we can help answer a few questions so far: Who is pushing the boundaries of the wearable technology space, and which device is best suited for you?

Preface: There is more than one Android Wear watch available to the public, I know. I chose the Moto 360 for this comparison because of the seemingly superior build quality over the rest of the competition (though fans of the LG G Watch R might disagree).

And I know… the Apple Watch was just announced yesterday. We know much less about this device than we’d like to, but nonetheless, these are my thoughts regarding the future of wearables and how each company is approaching the space.

The Moto 360 and Android Wear

The Moto 360 is the first Android Wear device from Motorola, and is available for purchase today. It offers a circular design, Qi wireless charging, and comes with a Horween Leather strap (or a brushed metal strap if you don’t mind waiting).

The watch itself has a brushed metallic outer edge, and offers a 1.56-inch 320×290 round LCD display. One thing that has been getting on peoples’ nerves is the black strip that cuts off the bottom of the display, where the ambient light sensor sits. Like it or hate it, the Moto 360 is the closest thing we have to a fully circular display.

Some other specifications include a TI OMAP 3 processor, 512MB RAM, 4GB of internal storage, pedometer and hear rate sensor, and a 320mAh battery. It measures 46mm in diameter and 11.5mm in width, and weighs 49 grams.

Apple Watch is Apple’s first attempt at a smartwatch, available for purchase in early 2015. It has a square display, inductive wireless charging, and comes in two sizes and three different iterations: Apple Watch Collection, Watch Edition Collection, and Watch Sport Collection. Each one is different, so let’s break it down a little bit. 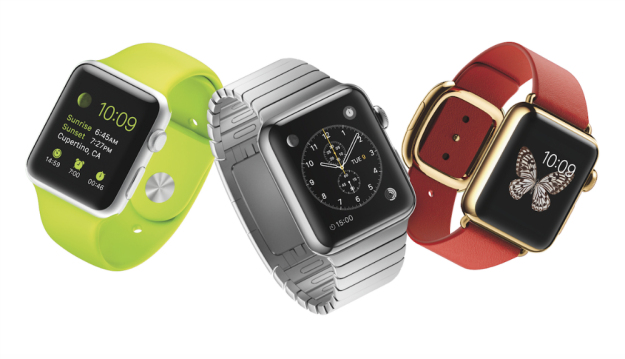 Apple Watch Collection: The body is stainless steel or Space Black finish, complete with six different types of straps that buckle into the top and bottom of the watch. This collection is the standard collection, more geared towards the general user.

Watch Edition Collection: This will be essentially the same as the Apple Watch Collection, but will be offered in an 18-karat rose or yellow gold finish and will have design enhancements added to the digital crown.

Watch Sport Collection: The body has an aluminum finish, and comes with only synthetic rubber straps.

Each collection will offer two different sizes: 38mm and 42mm, appropriately made keeping everyone in mind. All collections offer sapphire glass finishes, a custom S1 SiP chip, and a “digital crown” home button (more on that later). Apple’s also offering a new Force Touch technology that can tell whether a touch is normal or forceful. There is no word on battery quite yet, which has some concerned about how long it will last from day-to-day.

The main difference you’ll notice right away is the difference in form factor. The reason the Moto 360 got so many people amped right away was because of it’s circular display. A circular display had never been done on a mainstream device before this, so it really looked like an attractive option for many of us. It looks like a more traditional watch, and absolutely strays away from having a small computer on your wrist. It is a bit bulky compared to the thickness of the watch strap, but that’s about the only design flaw we’ve heard thus far.

On the other hand, the Apple Watch really surprised many of us because of its seemingly underwhelming design. It’s a bit bulky for the overall design, not to mention the square shape of the device. It’s not ugly, but it’s also not anything special. Apple has long had a reputation for creating premium hardware, and I just don’t see that here.

Now this is what really matters. How will you interact with the device? The reason to buy a smartwatch is because of the functionality… and if you don’t like the way it works, why buy it? We’re seeing two very different ways of navigating through the watch, so let’s see which one better fits you. 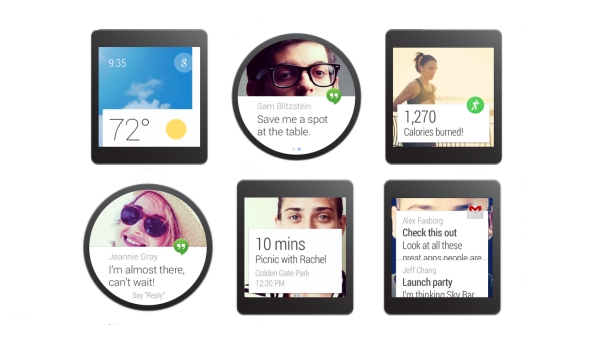 Android Wear’s approach to navigating the device is to use your hands as little as possible. The main screen is a clock (obviously), with a Google Now card on towards the bottom of the screen. It will give you the most recent one that’s available, including texts, emails, weather, or basically anything else.

The easiest way of navigating through the available actions is to use your voice. Android Wear needs some improvements in this area, especially if you need to use your finger to swipe through different menus. It’s basically a never-ending list to scroll through, which is not user friendly in the slightest. However, Google Now has long had a reputation of getting you information before you need it, so it absolutely helps to see navigation, weather, and other relevant information the moment you need it.

Apple is taking a different approach when it comes to interaction with your watch. The main screen of the watch is a bulk of circular icons, sporadically laid out throughout the screen. Want to open an app? It’s right there, waiting for you, similar to how the iPhone’s home screen is laid out. Swipe up from the bottom to access Glances: useful information, right when you need it. The Glance feature is basically like Google Now cards that you can swipe through and get as much relevant information as you need.

One other unique feature Apple is using is the new “digital crown” scroll wheel. Not only does it turn the screen on and off, but you can use it to scroll through lists, zoom in to maps, and much more. It’s definitely an interesting concept, but it doesn’t seem like it’s necessarily the most intuitive. Setting a traditional watch’s time is already an awkward hand movement, scrolling a tiny dial with your fingers. Going back to using a dial, even though it isn’t in the traditional sense, just seems backwards. Besides, isn’t this why touch screens were invented?

Both ways of navigating through the respective interfaces aren’t great quite yet, but they aren’t necessarily horrible. They’re both innovative, but we’re going to have to use the Apple Watch before we make any more comparisons.

The pricing information we have so far is as follows: the Moto 360 is on sale now for $249.99 through Motorola.com, Google Play, or BestBuy.com. Motorola’s site and Google Play both have the watch on backorder, and Best Buy only currently has the device available in-store. 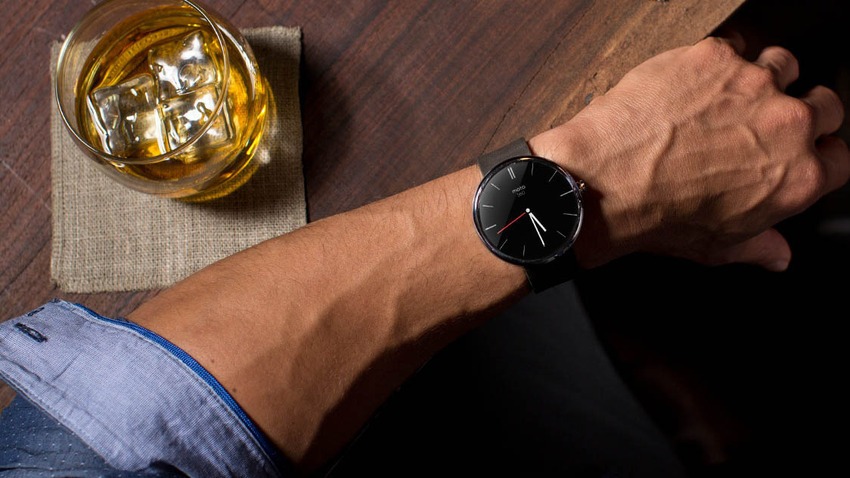 All three collections of the Apple Watch will be available at the beginning of 2015. We’re assuming that means sometime in Q1. Unfortunately, that is right after the holiday season is over, and Motorola should already be working on getting the next version of their watch out to the general pubic. We don’t know specifics on the prices, but the Apple Watch’s base price will be $349.99. We don’t know what collection will start at this price, but the other collections will likely start at 50-100 dollars more than that.

So, what’s the draw?

I would, by no means, call myself a fanboy for Motorola. In fact, the Moto 360 is the only piece of Motorola hardware I’ve ever purchased in my life. So why did I pull the trigger and order right away? From the moment I laid eyes on it, it felt different. It felt like the future. A circular (albeit not a perfect one) display paired with the Android Wear interface looks like something out of a crazy concept video that could only be executed in the future.

The Apple Watch doesn’t do that for me.

The Apple Watch reminds me of an LG G Watch/Samsung Gear Live hybrid with a more confusing, cluttered interface, and I can’t just get around that. I can’t pay $100 more for a watch that does the exact same thing as the competition in an uglier package. The software seems too much like a traditional smartphone’s, and that just won’t work on on a screen smaller than 2 inches. 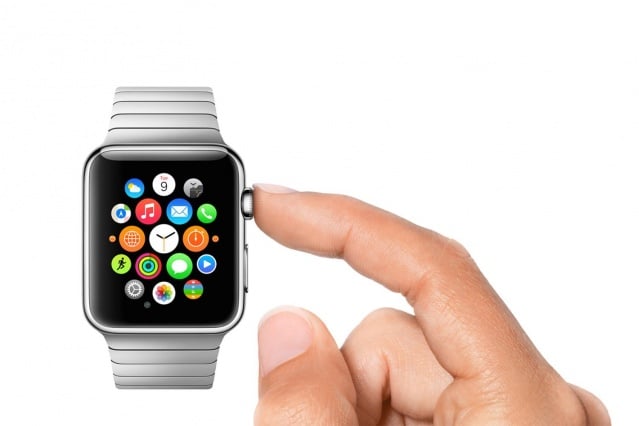 When Apple was showing off the full gallery view of all of their pre-loaded pictures, I laughed at the sheer ridiculousness of the concept. When they were showing off the zooming feature with the digital crown in Apple Maps, I thought that it was a completely pointless feature, yet they were still showing it off to millions of people. Two-inch wide screens aren’t the same as 5-inch screens, and I think Apple needs to understand that. The software seems rushed, and I just can’t get behind it.

Though this is a battle of smartwatches, what it comes down to is this: which complete package offers the best features for you? The competition isn’t just about the best smartphone anymore… it’s about the ecosystem. Both smartwatches, though brand new and partially unreleased, offer incredible leaps in technology that gets me excited, no matter which one I like more. By the looks of it, though, Android Wear and the Moto 360 looks like a more complete, well-thought out package compared to the competition.

But you know what? There are people out there that think Apple just invented the smartwatch. And I would know… just look at my Facebook News Feed. People will still buy the Apple Watch no matter how much catching up it needs to do to other technology out there, no matter how much it costs, simply because it’s Apple we’re talking about. Apple creates great products 99% of the time… I just think they could have done so much better with an entirely new product category.

What are your opinions of the Apple Watch? Am I completely wrong in my thoughts? Let me know in the comments… I’d love to hear from you!