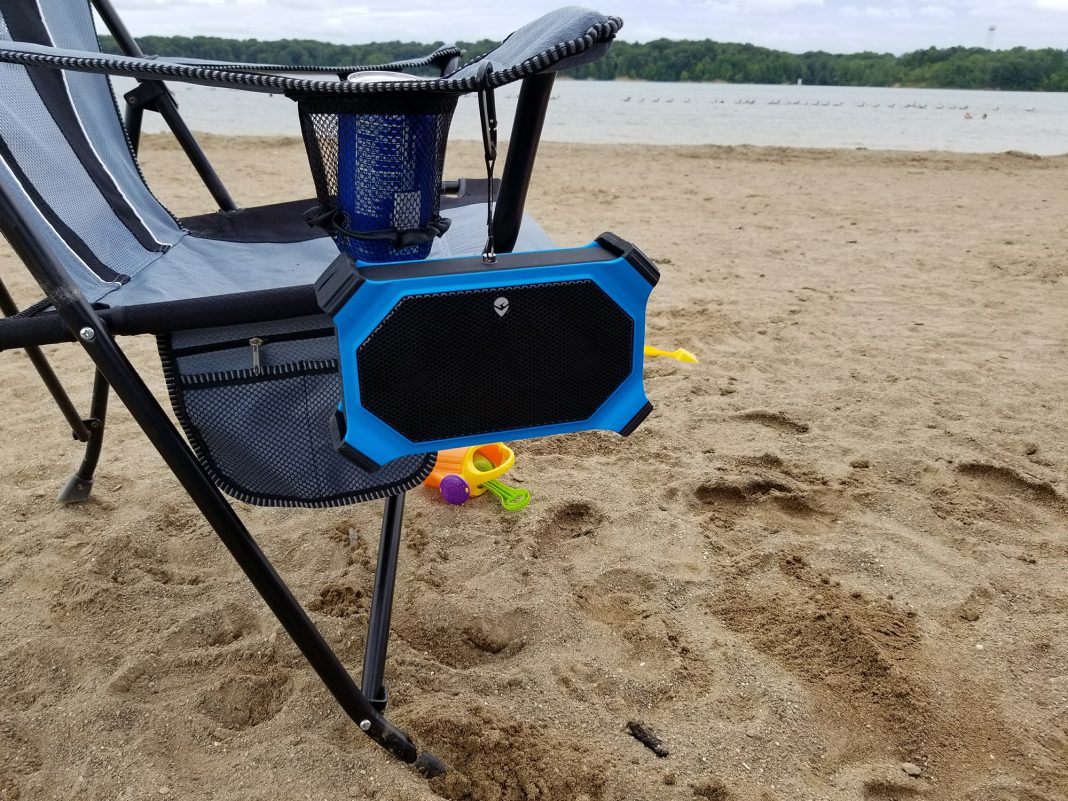 My family is basically a school of fish. Since living near the beach many moons ago, it always seems that we end up at the Outer Banks on vacation or we’re hitting up one of the many lakes around where we currently live. For a while now, I’ve been trying to merge my love of the beach and the water with my love of music. If you’re around me for any period of time you’ll know that I constantly have tunes on.

Sure, there are plenty of speakers out there with water resistance or that claim they’re safe to take to the beach, but they all looked kind of shitty or very expensive. So, when I was offered the ECOXGEAR EcoSlate, I jumped at the chance. The spec sheet indicates that it marries Ingress Protection (IP68), a long-lasting battery, and a flashlight. And one look at the thing tells you it isn’t going to be a cheaply made speaker you’ll get rid of or throw in the drawer after a few uses.

I have no other words for this thing besides “badass.”

Alright, a one-word review is pretty boring, so I’ll go a little more in-depth. The most obvious thing to me when I look at it is the gigantic grill on the front. In my highly (not) scientific drop test, it stood up well to a drop from about three feet onto the corner of my wooden desk. I feel like this is a “worst of” scenario for everyday use. Anything more than that would fall outside of a normal scenario and you’re on your own at that point. 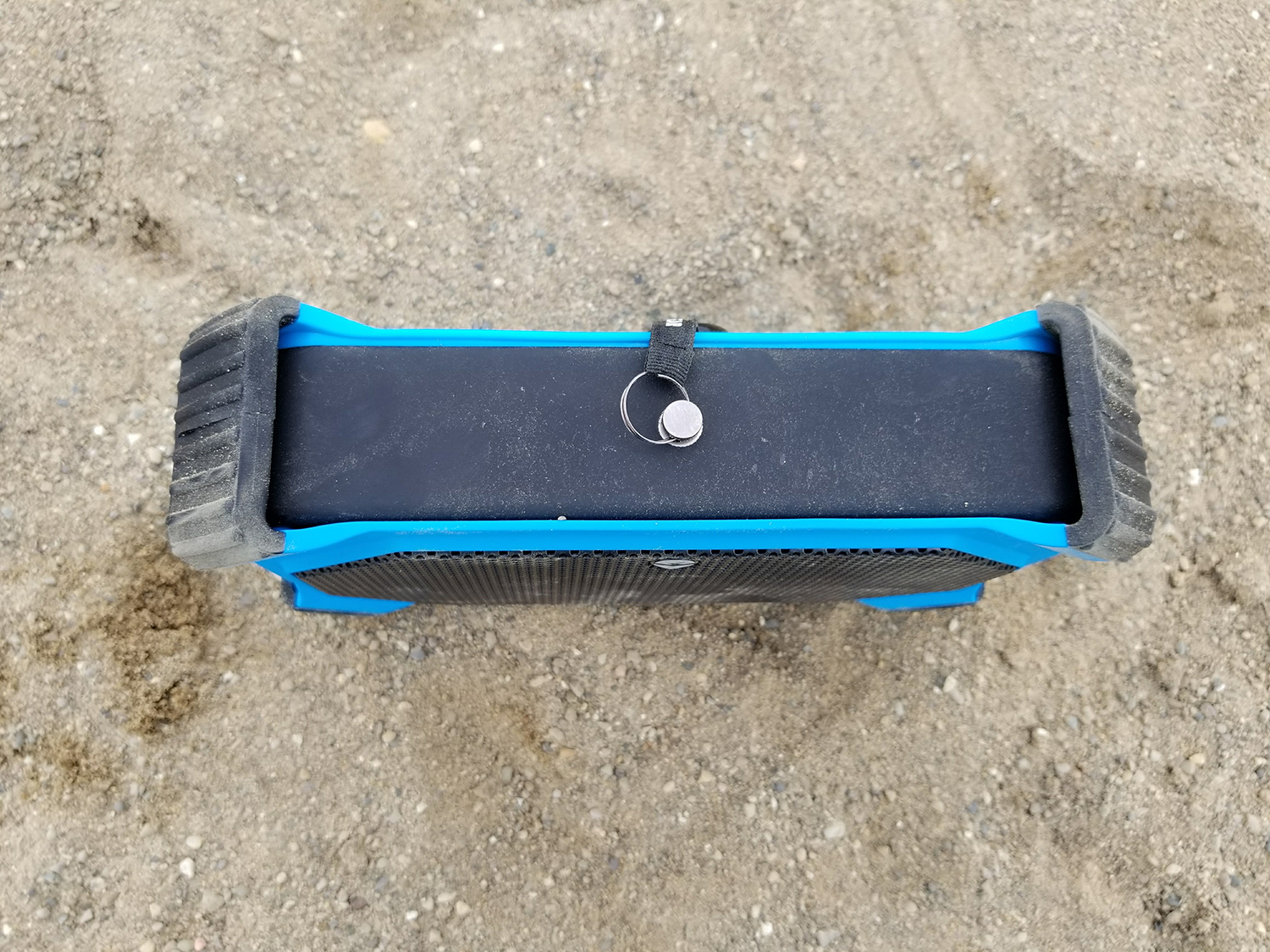 The huge bumpers on the corners offer pretty awesome drop protection that make the speaker bounce around a bit like a football when it hits the floor. If you ever do drop this thing around your feet, try to jump back because it’s going to hurt if it lands on the top of your foot. I know from experience. The weight isn’t overwhelming but I could tell when I added it to our already-full pack of supplies for the beach.

The huge, rubber, backlit buttons on the top are a little oversized, but I really appreciated them when I was trying to operate the speaker at the beach. With the sun in your eyes and wet, pruney hands, it’s nice to have big defined buttons to press. You’ll get buttons for power, Bluetooth connection, EcoConnect, volume up and down, track selection, play/pause, and flashlight. The buttons have a bit of push-back in them so they take a little force to actually press down but provide a satisfying click when you bottom out. 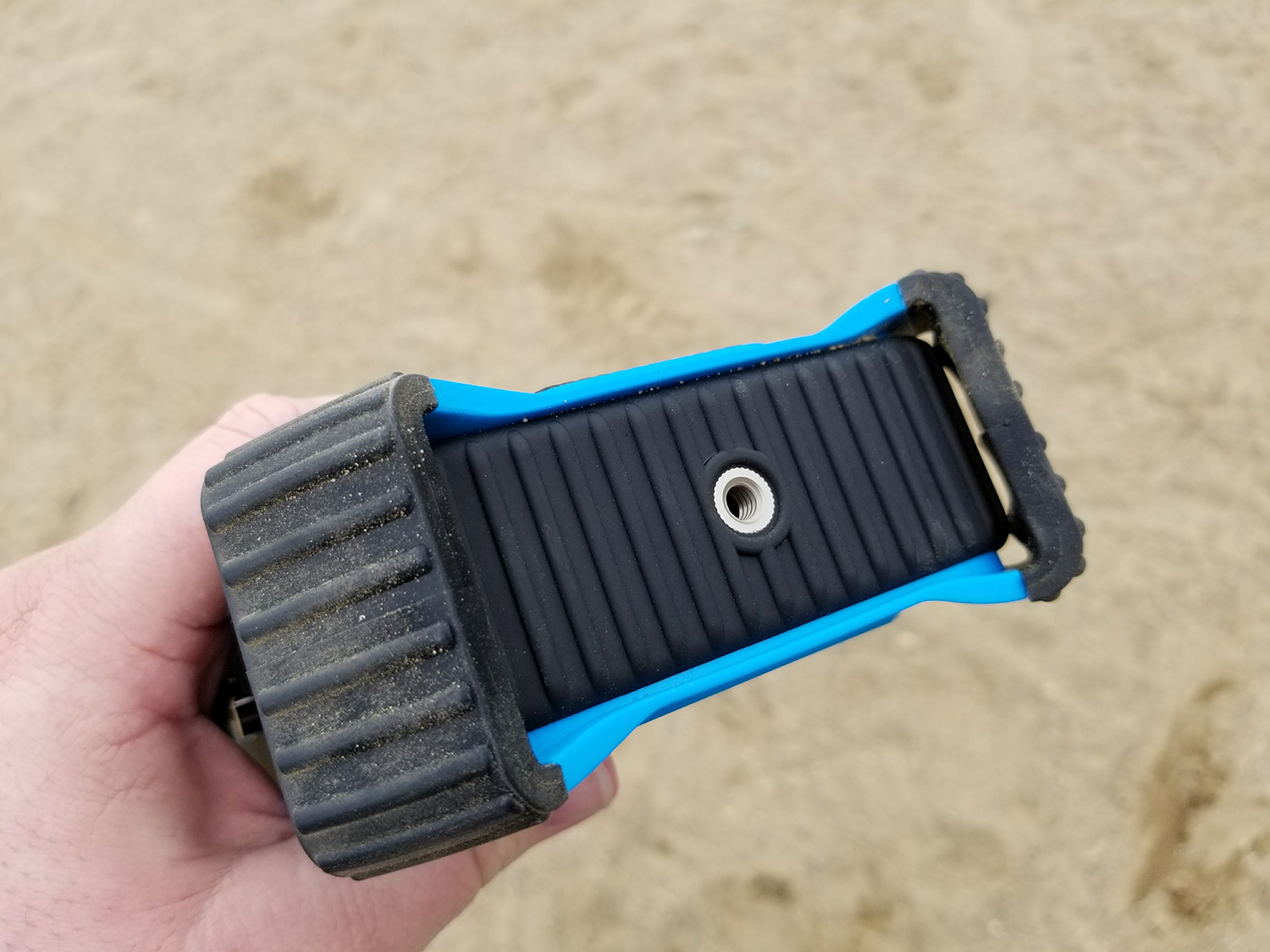 The right side and bottom of the device have a hole for you to screw in the included carabiner. Unfortunately, mine broke after the first use. I’m willing to chalk this one up to bad luck because the carabiner and cord connecting it seemed like decent quality, but it’s certainly something to watch out for if you pick one of these speakers up.

The back of the speaker hides a locking compartment that houses a USB port to charge your other devices, a microUSB port for recharging the speaker, an aux-in port for plugging in your phone so you don’t have to use Bluetooth, and an on/off master switch. This compartment MUST be secured if the device gets wet or it will get ruined. It holds tight once it’s secured so you won’t need to worry about it coming undone by itself, but you’ll have to remember to secure it after you recharge the battery. 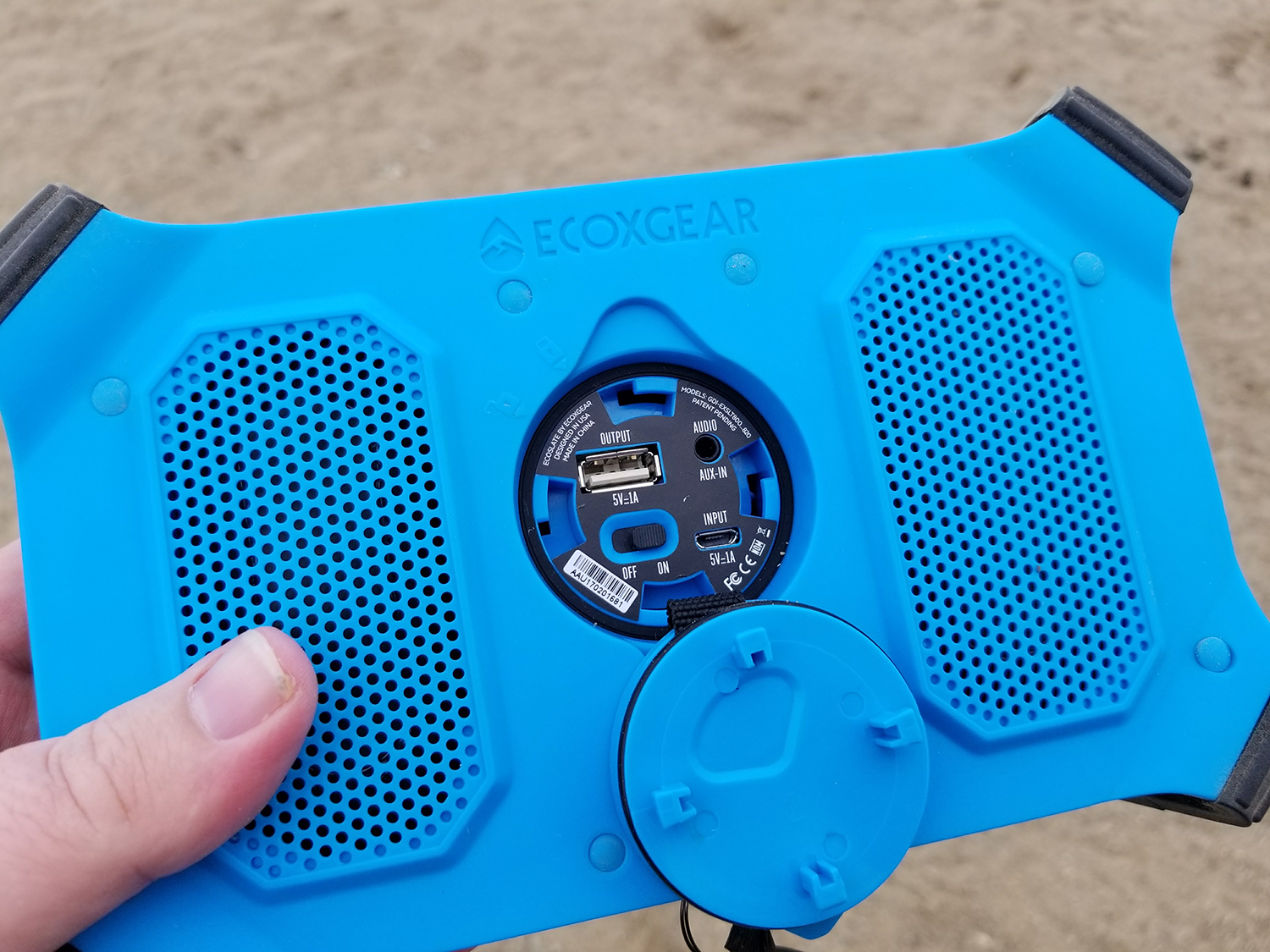 On the inside, the speaker houses a battery that ECOXGEAR claims (pretty accurately) provides 15 hours of music playback. We listened to the speaker at mainly mid to low volumes as the speaker is pretty powerful and got anywhere between 13 and 14 hours on a full charge.

I am in no way an audiophile and that’s important to keep in mind when I talk about the sound coming out of the ECOXGEAR EcoSlate. I love music and I normally have it on at any given time, but I don’t live my life trying to get the purest sound possible.

That being said, I wasn’t blown away by the EcoSlate. Yes, it does put out thunderously loud audio for the size of the body. The two 10W speakers and 2 passive woofers do very well in keeping entire rooms full of music, but I always feel like the soul in the music is just lacking. 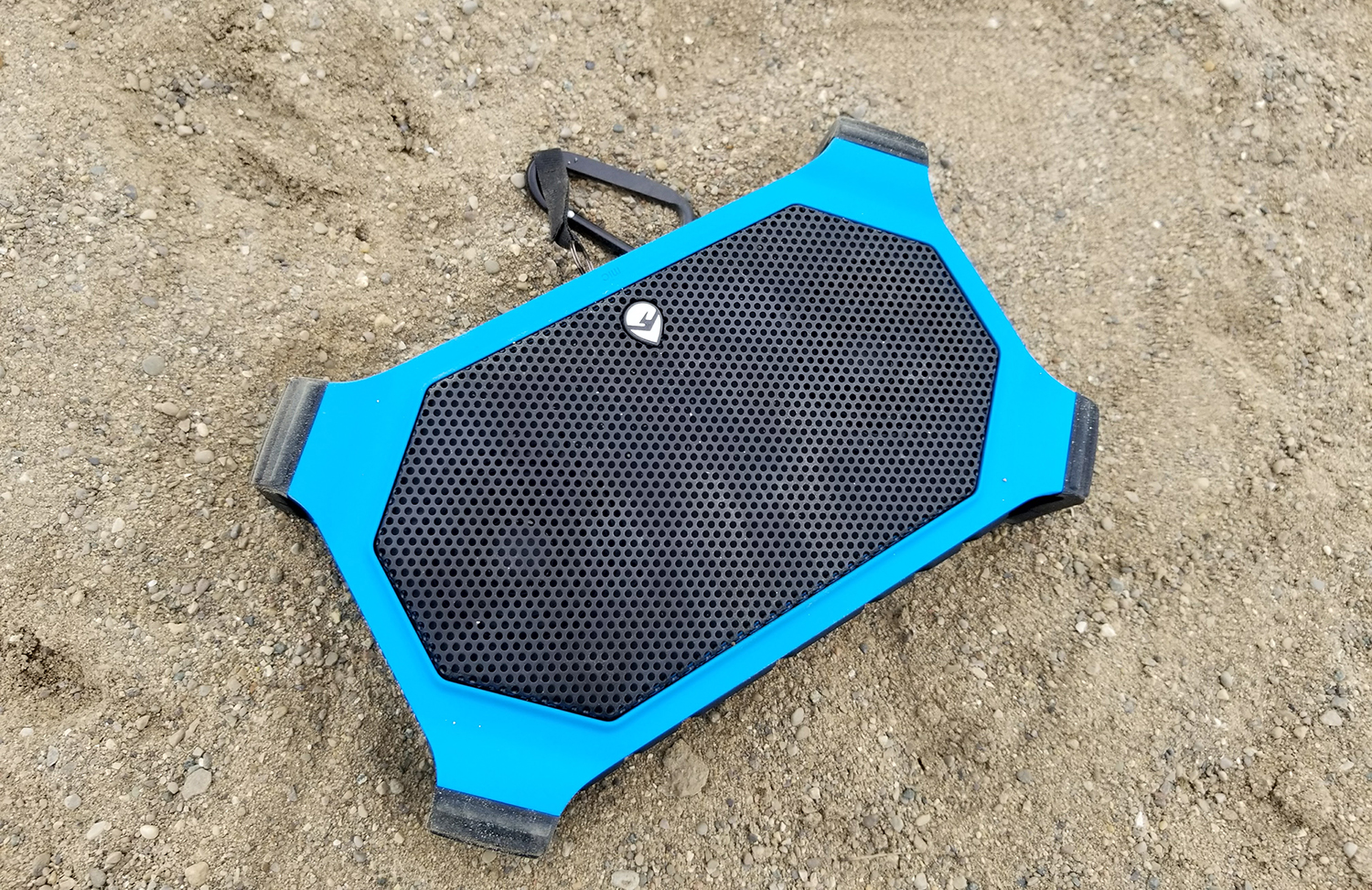 Most of the times, it doesn’t matter that much. I keep going back to the example of being at the beach, but I think it’s a perfect example here. When you’re chilling in your chair with a beer, munching on some snacks and enjoying the view, do you need the best sounding speaker ever? I certainly don’t. I just need something that sounds “good” and the EcoSlate does the job.

Could the bass be beefier? Sure. Could the the mids be a little better defined? Absolutely. Could the highs be a little less sharp? Yep. But, overall listening does remain pleasant. You can kick on anything from Fall Out Boy to Blake Shelton, to No Doubt and enjoy your music just fine. I might stick clear of the pop princesses that hit the high notes often, but that’s really the only complaint I have.

Overall, I really like the ECOXGEAR EcoSlate. The speaker produces good enough sound and has really cool features like speaker pairing, an IP68 rating, and a flashlight. Right now the speaker sits at about $150 and that’s a perfect price for what it is. When you compare it to high-end speakers like the UE Megaboom that retails for $299, you can pick up two of these and pair them together for a really kickass experience for the price of one Megaboom.

Other reviews have pointed out that 100-foot range is a bit of a best case scenario for this speaker and they’re right. There’s a real problem here if you lose line of sight. During my test, I’ve been able to break up the signal while placing a child’s book between the phone (Samsung Galaxy S8 Plus) and the speaker. If I were walking into other rooms where walls separated us, I could understand, but I think there’s a weakness with speaker there.

Interference issues aside, the EcoSlate combines a lot of features into one package. You’d be hard pressed to find another speaker in the $150 range that has waterproofing, a rugged construction, a 10+ hour battery, the ability to charge a secondary device and a flashlight. When you take everything into consideration, I think the EcoSlate is one of the best options on the market and will certainly be making the return trip to the beach with me and my family.

If you’re interested in picking up the ECOXGEAR EcoSlate, you can grab one at Amazon, Costco, Home Depot, and ECOXGEAR’s site. 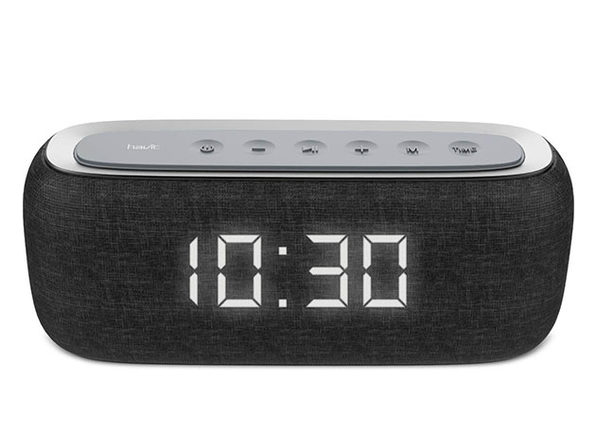 The HAVIT Bluetooth Speaker with Radio and Clock is just $36 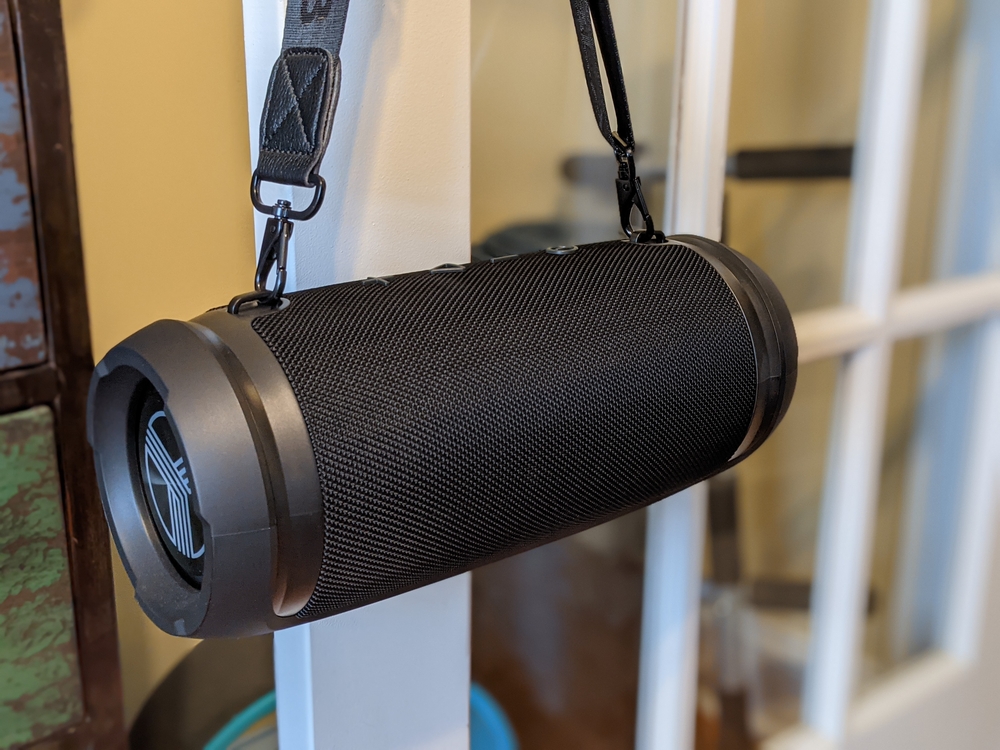