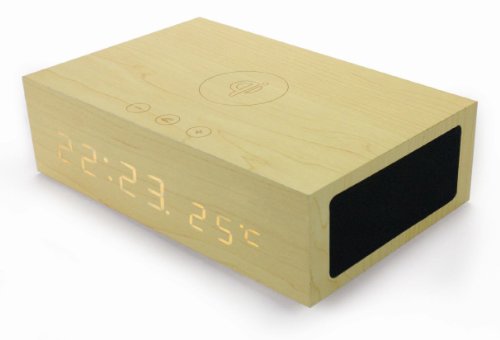 The SoundBot SB1000 also known as the PowerBot SB1000 are both the same item with slightly different branding by parent company EyeCandis.

This feature packed alarm clock is a multimedia power station; available in both “Natural Wood” and “Dark Wood” color shades. 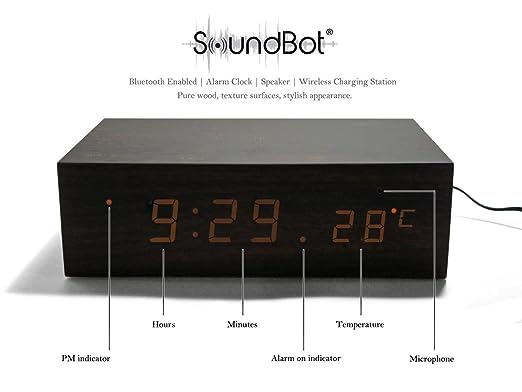 The alarm clock is packed with:

The Bluetooth stereo speakers (found on both sides) of the clock are great and provide great trebles and bass. I’ve been able to play audio, make and receive phone calls, parties can hear each other without a problem when in range of the microphone. Audio distortion is barely perceptible except when all devices on are their respective maximum volumes.

The volume range for the SoundBot SB1000 is decent for average household usage, but it’s not overwhelmingly magnificent.  I have tested the speakers out with many genres of music, and they perform very well.

Pairing is simple but it can be a bit of a hassle the first time you connect to your device. On the top of the alarm clock you will find touch sensitive keys that allow uses to make and answer a call, pause/play music, change the speaker’s volume and more.

The main function of this device is to work as an alarm clock; the unit provides time with a large LED Display accurately once set. The alarm volume can be too low at times, however you can use your smartphone through the device’s speakers for a louder sound. But, without using a smartphone or tablet, I’m not quite sure this will always wake you up on its own.

This alarm clock has a really neat temperature sensor. Set to Celsius by default, it can be switched to display in Fahrenheit. While the temperature sensor is very accurate, I had an extremely difficult time switching temperature formats due to a manufacturing issue with the unit during my testing.

This device has a built in wireless charging pad built in to the top to charge your Qi compatible devices when placed in the proper position, the Qi Feature has functioned very well once activated. The positioning of your device and the qi charging pad is extremely sensitive, even without a case on your device, so make sure it’s in the right position before charging. Unfortunately, the Qi pad isn’t quite drop and go because of it’s sensitivity.

On the top left-side corner of the clock, there is a built-in empty NFC Tag so you can setup your own NFC commands with NFC capable smartphones and tablets.

This is a great Bluetooth speaker that shows the time, has NFC connectivity, excellent sound, and Qi charging. It might not, however, replace your alarm clock just yet. Due to a few quality control issues (temperature sensor, converting temperature, LED, and Bluetooth Pairing broadcast) When it all works properly, it’s an amazing device. Just note that some users have reported faulty products.

You can find the SoundBot Bluetooth Speaker Alarm Clock in Natural Wood and or Dark Wood at Amazon for $79.99.