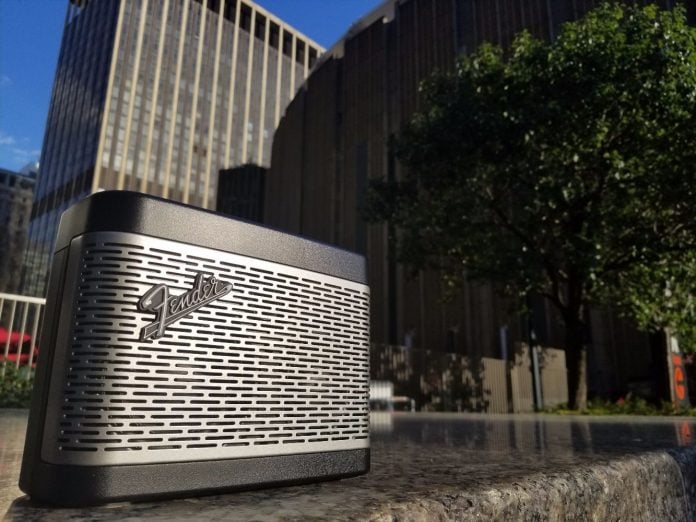 I shouldn’t even introduce a brand like Fender. They are so famous and renowned throughout the world that there’s nothing I could say that you didn’t know already… Except for one thing: they are now making Bluetooth speakers. It’s like a match made in heaven: a brand that has dedicated its entire life to creating music instruments is now manufacturing their own Bluetooth speakers. What could go wrong?

The answer is: almost nothing. Fender didn’t make these devices just for fun or for making a quick buck. They actually thought this through and has come up with a superb product that, despite some very minor flaws, matches or outperforms its competitors.

These are the specs for the Fender Newport, right out of Fender’s official website:

In the box you will find the speaker, AC adapter, 3.5mm audio cable, a USB to microUSB cable, and manuals.

Upon receiving your box, the first thing you will notice will be its weight. It’s not an assumption, it’s a fact. This thing is heavy, but it could be worse. Other speakers with similar prices, such as the Marshall Kilburn and JBL Xtreme are even heavier. However, the Bose SoundLink Mini II and Marshall Stockwell are lighter, allowing easier transportation.

I had to carry this around New York City while taking pictures of it and it was definitely noticeable. It is not something you would carry with you “just in case,” but rather because you are 100% sure that you are going to use it.

After you stop lamenting about the speaker’s weight, you will be amazed at how good it looks. You will not mistake it for one of Fender’s original amplifiers (like you might do with a Fender Monterey), but this is no conventional Bluetooth speaker either.

The metallic grid on the front accompanied by the Fender logo looks and feels superb. While the Monterey used a rugged plastic that closely resembles an amplifier, the Newport uses a soft, smooth surface that still manages to avoid feeling cheap. 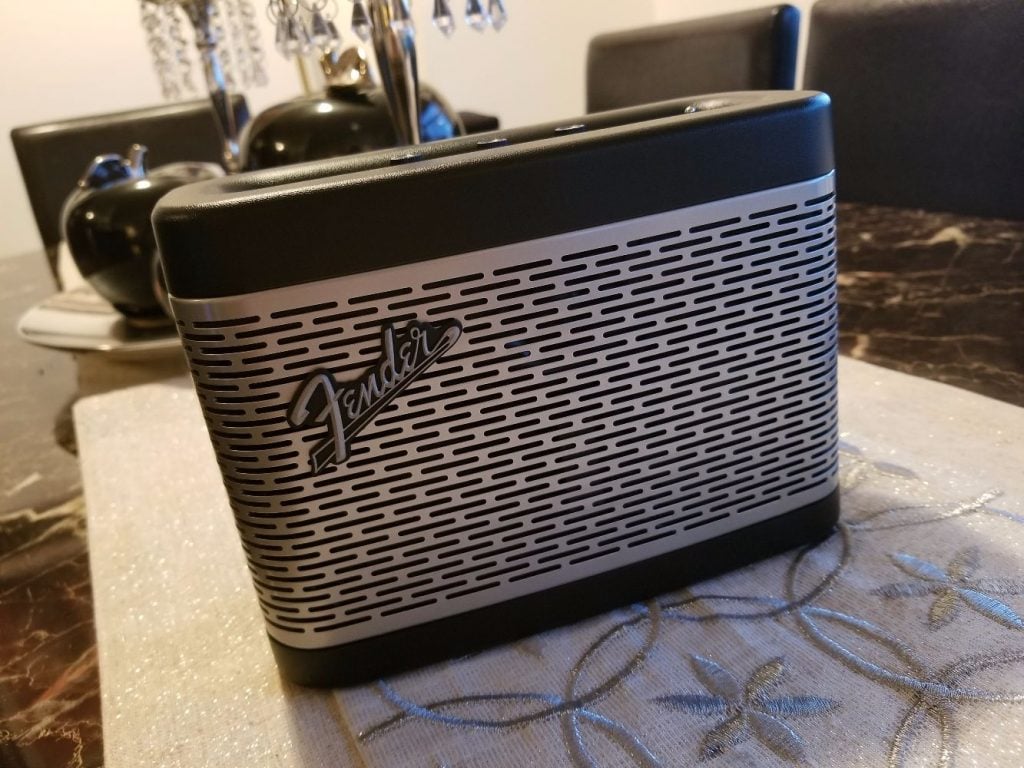 On the top you will find perhaps the most unique aspect about this speaker. If the overall design wasn’t enough for you, Fender made sure that you actually feel like you are using an amplifier by making its controls look like one. Instead of having buttons only, the Newport has three knobs (for volume, bass, and treble), one switch for power, two small buttons for pairing and answering calls, and one indicator light. They all feel incredibly sturdy and premium.

I had the chance of checking out some actual Fender amps and the similarities are incredible. The Newport knobs feels strikingly similar to the ones in real Fender equipment.

As always, looks are subjective, but this device has caught the attention of absolutely everyone that has seen it. I always get a “that is so cool” (or its equivalent in Spanish) from the people I’ve shown it to, and the fact that it is made by Fender means that everyone immediately associates it with high quality and superb sound. Of course, it was just a small social experiment that I made, but I think it is safe to say that Fender has done a superb job in the design department, and that very few devices in the market look as good as this one. 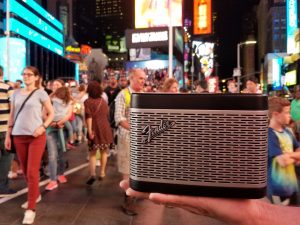 Fender didn’t stop with the amplifier resemblance at the design level. Each action that you do will trigger a nice guitar sound. The company has included tunes for turning it on, pairing, low battery, and everything in between.

My only gripe with them is that they don’t respect the volume knob setting. Even if I have it at position 0, it still sounds loudly. I feel sorry for my flatmates, since they have to listen to these guitar tunes every day every time I turn the speaker on and there’s no way I can make something to avoid it.

Pairing the speaker with your preferred Bluetooth device is extremely easy. You just need to press the Pair button, select it from the available devices in your device, and away you go. The speaker will make a sound accordingly and the pair button will stop blinking to let you know that everything went as expected.

I haven’t had any connection drops, even when I moved my device to other rooms with several walls between the speaker and my Samsung Galaxy S8. 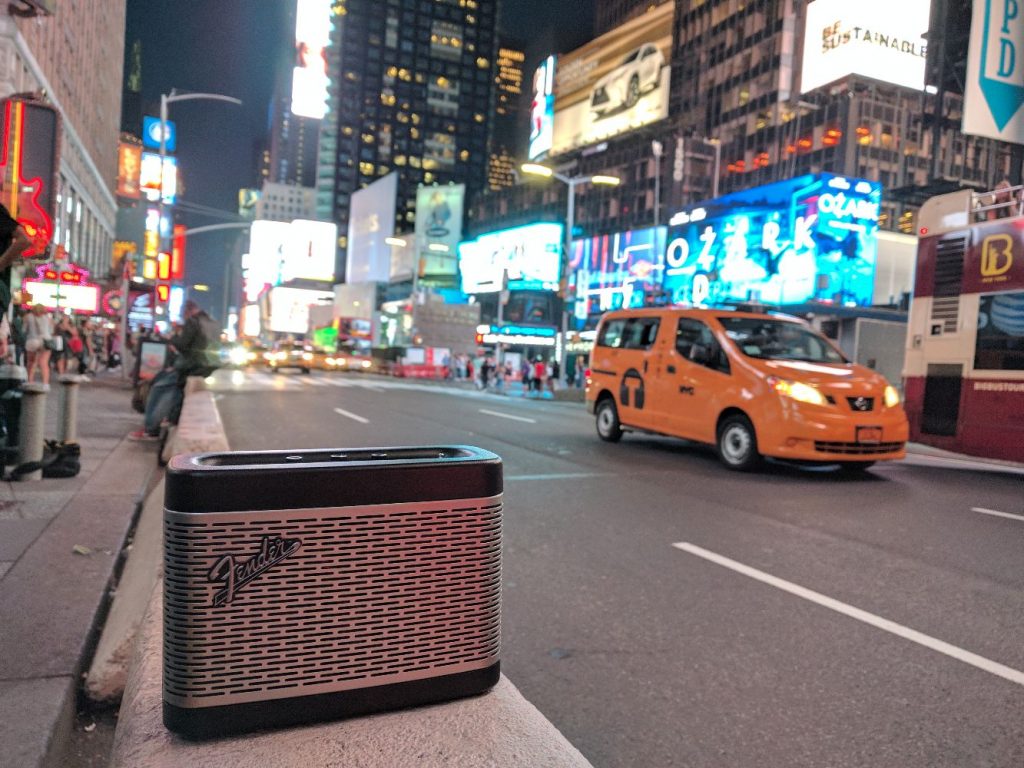 Apart from the Bluetooth connection, the speaker has a couple of tricks up its sleeve. The first one is a regular AUX port. I tested it with the included cable and found no troubles with it whatsoever. I would definitely not use it but it’s good to know that it’s there for people who prefer the reliability of a regular AUX connection.

The other one is a USB port. No, not a microUSB port, but a regular USB port. You can use this port to charge your device. I am really glad that Fender decided to add this to the speaker because there’s nothing sadder than having to stop the music at your social gathering because the phone with the premium Spotify account just died (been there).

Of course, any connectivity features or nice looks are irrelevant if the speaker sounds bad, right? Fortunately, it doesn’t. From the moment I played my first tune, I quickly realized that this was one of the best Bluetooth speakers that I’ve had the chance of using.

This is courtesy of Fender’s tri-driver system, in which they have incorporated two woofers and one tweeter into the speaker. The arrangement produces a (maximum) output level of 30 watts. Fender hasn’t provided figures for the frequency range of the speakers, though, but it is probably no different than competing products, around the 90 to 20000 Hz range. 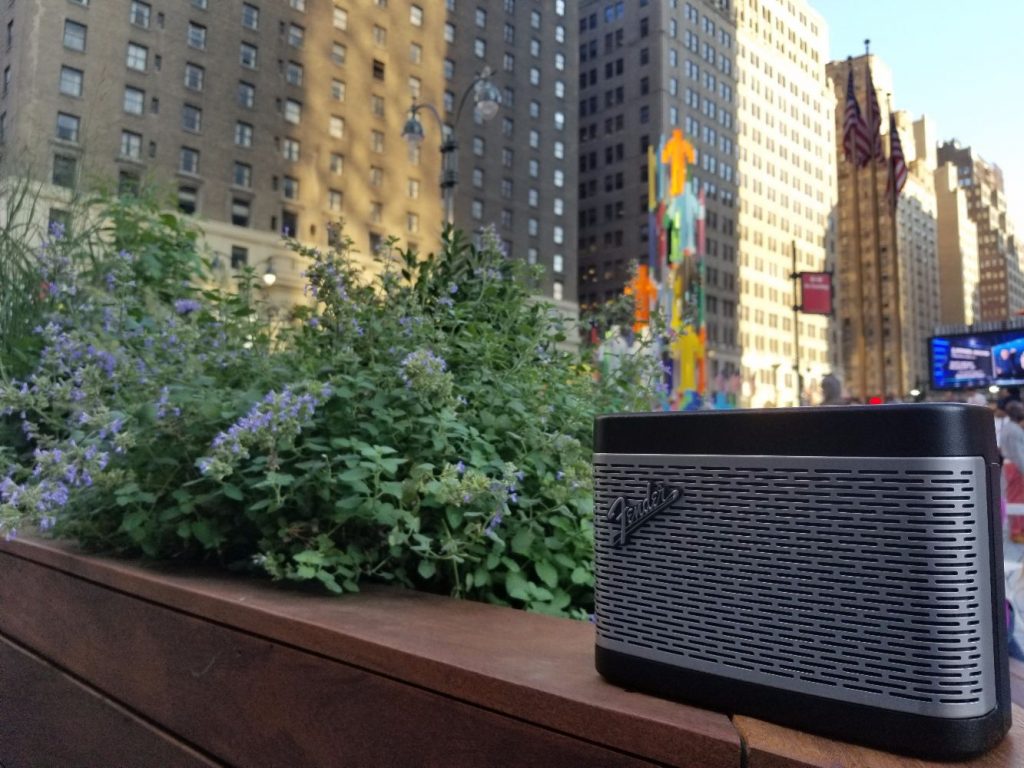 Sound is clear and powerful, but it’s is fairly balanced. There is no emphasis on anything, just a balanced, crisp sound. You could say that bass sounds a bit muffled and not as strong as it could be, but, other than that, the sound that the Newport produces is top-notch.

In case the default sound is not up to your standards, you can change the bass and treble knobs to adjust the output. I normally setup my devices to have a bit more bass than the default. I found out that setting the Bass knob on 10 is not as noticeable as one would expect, but it is a huge improvement from the normal setting.

I don’t consider myself a person with a varied taste in music, but I did test songs like The Solace System by Epica, Panic Station by Muse, Hell Yeah by Rev Theory, and On the Rocks by Amaranthe. Songs like Panic Station, which rely heavily on bass (you could say the same for a lot of Muse’s songs, frankly), are greatly enhanced with the bass knob turned up a bit. Songs from Dragonforce, for example, that don’t rely as much on bass sounds, benefit from adjusting the treble instead. It’s just a matter of finding what works best for you, but when you do, the Fender Newport sounds as good as the best speakers in the price range. 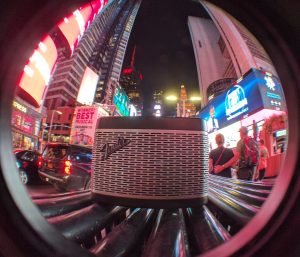 Another thing. This thing can get VERY LOUD. At first, I thought that it wasn’t as loud as I would expect when testing it with my S8, but nothing ever tested with this phone is loud. That’s when I figured that maybe I should try it with something else, and my Honor 7 Lite came to the rescue.

The first time I tested the maximum volume, my mother freaked out about the fact that I would disturb our neighbors. This is incredibly handy in open spaces and gatherings with several people, where a speaker with middle-range volume won’t cut it.

Finally, in case you receive a phone call, the Fender Newport has a built-in, echo-cancelling microphone. When you receive a phone call, the Talk button will flash on the top of the speaker and you will be able to answer the call. Overall, it worked pretty well the two times I received a phone call while testing this, and the other party didn’t mention anything in particular, neither positive nor negative. It’s there and it does its work the way it should.

The official specs say that this speaker can last for up to 12 hours. You don’t have to be so modest, Fender. This thing lasts forever. I haven’t been able to replicate this figure, but I’ve been getting at least 15 hours of playback time consistently. This is while having it on max volume (through the hardware knob only, not through Spotify) throught days and days of testing. I’ve always had the bass and treble on five (out of a possible ten).

Granted, I’m not much of an outside person, but knowing that, if the time comes where I have to see the outside world, I can just take this speaker with me and blast some Nightwish for 12 to 15 hours in a row, makes things much easier. I use this speaker every day for at least a couple of hours in my apartment, and not having to worry about its charge is something I appreciate a lot. If that wasn’t good enough, the charging time for the speaker from 0% to 100% was approximately one hour and a half. However, this is possible thanks to a propietary charger that comes with the device.

Hopefully you are careful with your stuff, since, if you lose it, then that’s the end of your air jamming sessions. In case you were wondering, you can charge it and play music at the same time.

Apart from laptops, I can’t think of another device that comes with a propietary charger these days. It’s either microUSB, USB-C, or Lightning, and any of the three are easily available. I’m pretty sure that you could find this charger online as well in case something happens to yours, but I would gladly trade up charging time in return of a more universal cable.

On the bright side of things, this charger is capable of accepting 110V to 240V currents, so you can just use an adapter if you buy the US version and want to use it in Europe, for example. Believe me, that’s exactly what I did.

Even though it is Fender’s first foray into the Bluetooth speaker scene, it is definitely a solid one. It should definitely be on your list if you are in the market for a high-end Bluetooth speaker. If you want to buy one, you can head to Fender’s website and get yours. It will set you back $199.99/€225. This positions the Newport in the upper end of the market, competing with products like the Bose SoundLink Mini II, Marshall Kilburn and JBL Extreme. However, you get a quality, good-looking speaker with great sound quality and impressive battery life for your hard-earned cash. That sounds like a good deal to me.

AtomicX V201: All you need is love and these headphones (Review)