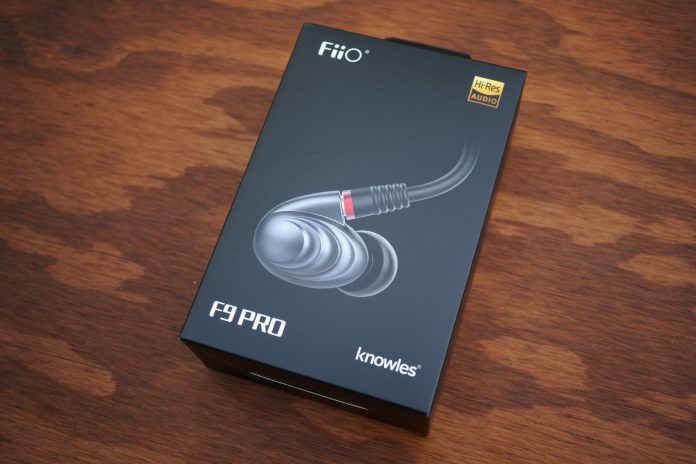 All of the audio devices we’ve looked at in the past from Fiio have been players. After all, this the company’s specialized field, and where it’s been killing it as of late. But with growth comes opportunity. We’ve seen the highly regarded, bang-for-the-buck manufacturer gradually expand its accessory portfolio, with wireless solutions and cables for many purposes. Now headphones are included in its products list, and you bet that the company’s top-value ideal persists.

The F9 Pro is Fiio’s current flagship in-ear headphone, with a triple driver setup that aims to give the similarly spec’d (and much more expensive) competition a run for their money. Can it do it? Let’s see.

In-hand, the F9 Pro delivers a premium impression not far from what we’ve seen in higher-end (and much higher-costing) earphones, like the Beyerdynamic Xelento or Shure SE846. The comprehensive use of metal to build the earpieces reminds us of the RHA T20, especially since that is another high-aiming, affordable in-ear headphone. Although, we can already say that Fiio is the winner when it comes to value. 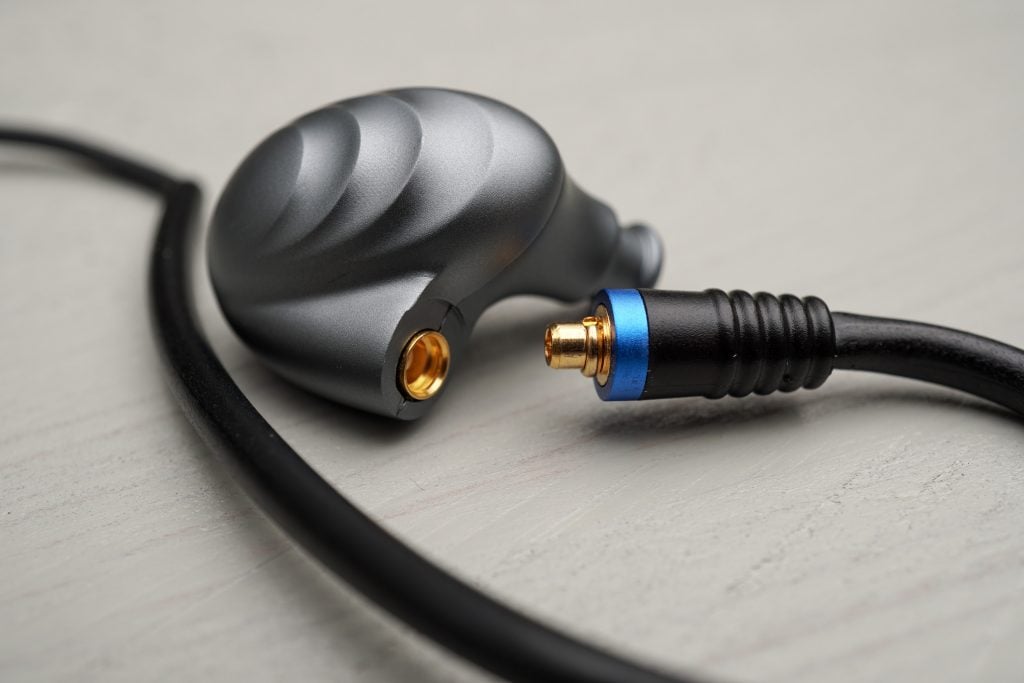 There are a couple surprises in the packaging that you probably won’t find in another earphone in this sub-$150 range. Opening the box reveals a waterproof case, and then within that case is a quality, appropriately-sized soft case (most earphone manufacturers make their carrying cases too big, which is counter-intuitive). Unzipping it presents us with two different cable options. Yes, we challenge you to find another set of earphones in this price range that sports a detachable cable design (in this case, using the common MMCX connector standard).

And this cable isn’t just a spare. It’s a Balanced cable…included in the box. Awesome. It uses the typical 2.5mm TRRS standard found in most portable HiFi DAPs (digital audio players). Fiio isn’t a stranger to making cables, and we love how the company seizes these kinds of opportunities to maximize value for customers.

That said, we found it strange that the standard (3.5mm jack) and Balanced cables are so different. The former has a more basic, solid form while the latter a thinner, twisted cable design.

Also, the standard cable has an in-line 3-button remote, which is absent from the Balanced one. What if a Balanced-user preferred the other design, or vice versa? Another big difference is that the rubbery sheathing of the standard cable gives a lot of tangle-resistance, a quality nonexistent in the other.

Coming back around to the earpieces, we really dig the design. No earphone we’ve seen has this kind of 3D “wave” formation. It’s eye-catching in person, but manages to be more sophisticated than flashy. 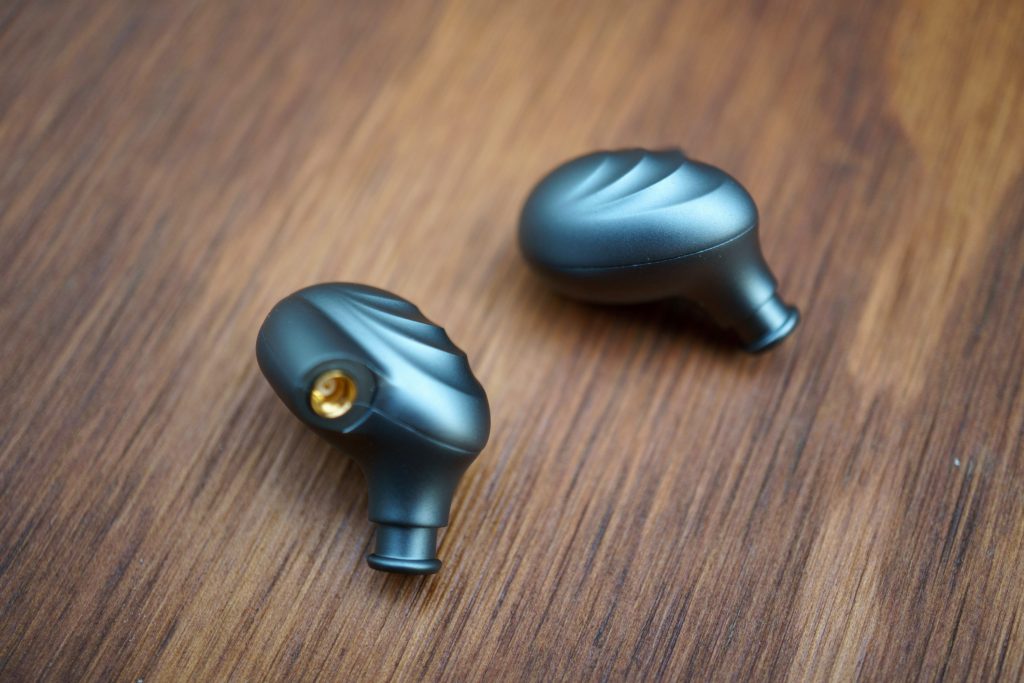 The general shape of the F9 Pro is like that of many around-the-ear earphones. That is, a pod-form that shoots the cable forward and up so that it wraps and falls behind the ear. There are several advantages to this method. It eliminates the chance of cable microphonics noise, and the fit is substantially more secure (especially better for working out).

Manufacturers make different decisions as to how much stiffness to place on the around-the-ear portion of the cable. I personally prefer none; it’s unnecessary in my experience. To my dismay, Fiio uses a very strongly molded routing.

But I ate my words when I found it to work really well. The memory wires make the perfect ear shape and superiorly stays in place. It manages to sit just above contact with the skin, which equates to notable comfort.

Something we found odd is the lack of a chin slider. There’s considerable length from the earpieces to the cable’s Y-split, so the left and right channels can be dangly, especially when working out. It’s something that Fiio overlooked, but far from a deal-breaker.

The Balanced cable wasn’t the only noteworthy aspect of the F9 Pro’s packaging. You’re also supplied a barrage of ear tip choices. There are four different sets (three types of silicone and one foam), which all have three different sizes. You should have no problem finding a pair that works. We’re glad about this because we weren’t fans of the Fiio-made silicone tips. None of the sizes were able to give us the perfect seal. But your mileage may vary.

The sound quality is where the real test is. Fiio sets the bar high with its feature-packed audio talk and premium aim. The F9 Pro is one of the few audiophile earphones that utilize a triple driver setup that consists of one dynamic + two BA (Balanced Armature) drivers.

We must mention that this “Pro” variant succeeds the original F9. The sound of that earphone left a bit to be desired, and this might be why Fiio upgraded the dual BA drivers to a Knowles-made solution in the F9 Pro.

Fiio opts for an engaging bass response. It’s the first thing that caught our attention, and not in a bad way. Some headphone makers elevate the bass to elevate impact, but too much bass can muddy the sound signature. Fiio does it responsibly. It’s strong and encompassing but not bloaty. That said, where we’re satisfied with the punch, we think the definition could use a little more work. There’s a hollow quality (slight lack of body/texture) to the bass. It’s not bad, per-se, but we’ve heard a truer reproduction from other high-end earphones.

We like how the bass manages to have exceptional strength without interfering with the mid-range. Though, it’s not completely 1:1. The mids aren’t as powerful, making the response appear U-shaped. Fortunately, this doesn’t equate to lack of excitement in the region. Instruments and vocals are pronounced and gracefully articulated. A laid-back nature (slight distance and lack of fullness) keeps it from the superior detail that higher costing earphones can dish. The treble has a very similar quality to the mids. There’s an appreciable amount of detail but not exceptional. We’d like a bit more presence and capture of higher-end details in Fiio’s next flagship earphone.

Soundstage (spatial perception) is one of the best aspects of the F9 Pro’s sound. It punches above its small in-ear weight, as sounds are generally space-filling about the head, and dynamics have some dimensional play. It’s not completely taken advantage of by all areas in the spectrum, as we’ve discussed, but the F9 Pro has more to offer here than a lot of lower costing “high res” earphones. 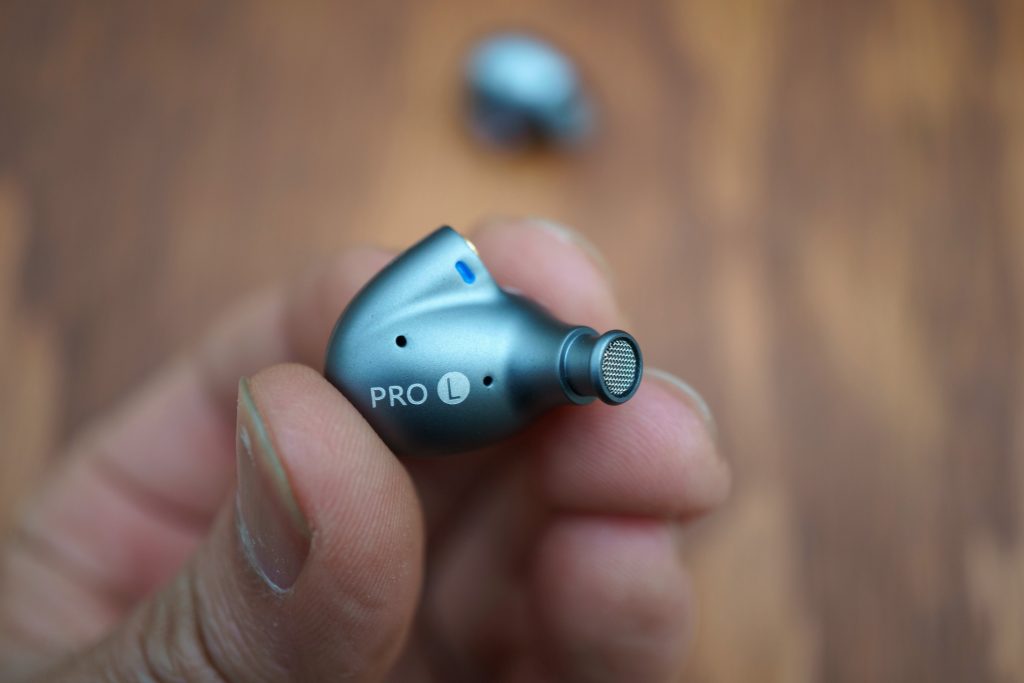 There’s a lot to like with the F9 Pro. It’s not the cheapest pair of in-ears you’ll find, generally, but it is very competitively priced when considering audiophile-class headphones. However, we ended up more impressed with the externals than the audio output. Fiio has some more tuning to do if it wants to give the high-end competition a run for their money. This isn’t to say that it’s not worth the money. You’re still getting a lot when you consider the overall package, and while we were critical with the sound quality, it is where it should be at this price range. And some qualities punch above its price, like the considerable bass response and lively soundstage.