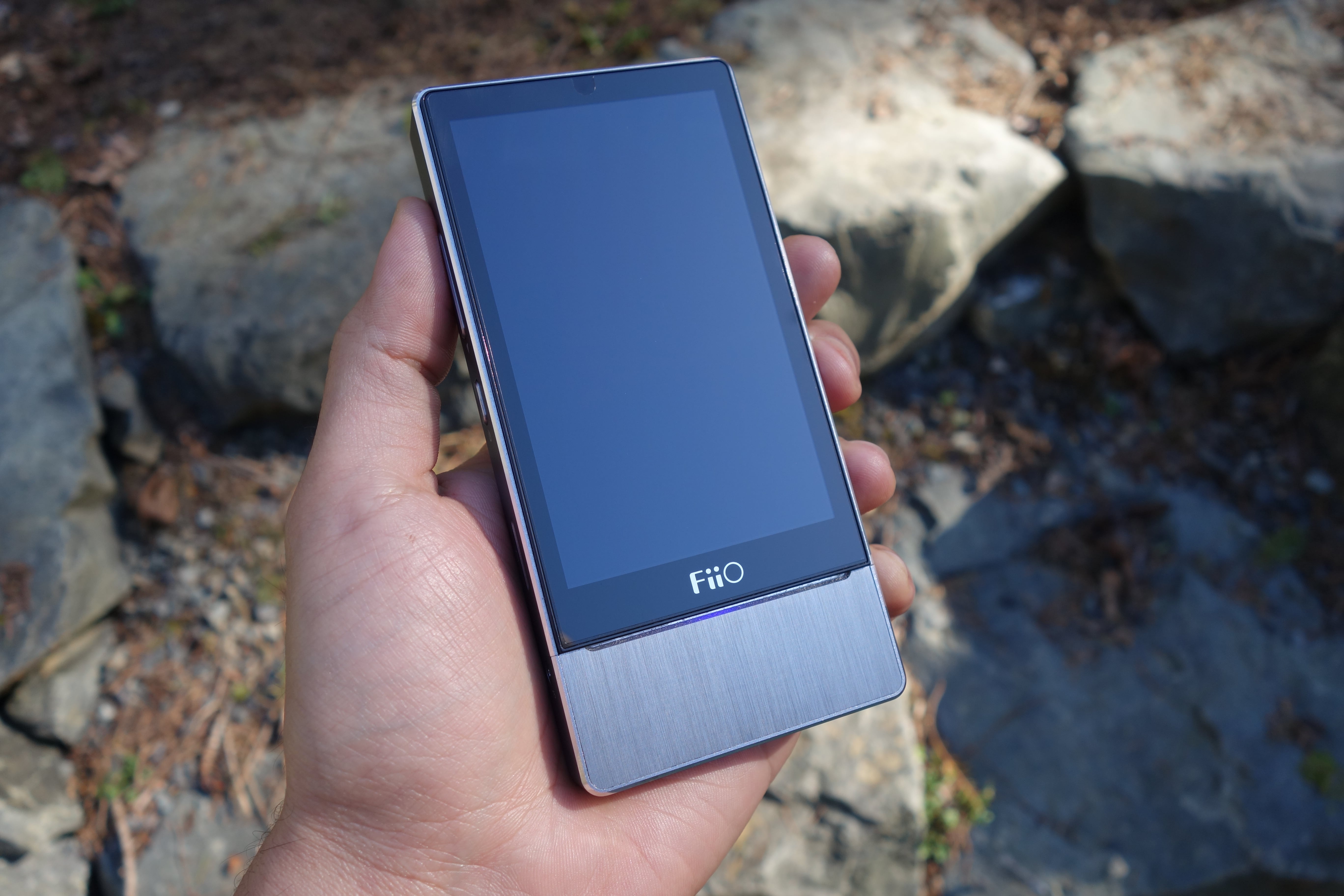 The growing desire for higher audio quality means that Android is showing more presence in the digital audio player (DAP) world. Folks may see it silly to carry around an additional device when our smartphones can play audio, but unfortunately, the quality isn’t great on phones yet. LG has recently shown an effort to remedy this with it’s B&O HiFi module for the LG G5.

Therefore, things are getting interesting in the portable audio market, as manufacturers try for the first time to power their devices with Android. A promising attempt that we’re reviewing today is the FiiO X7. FiiO is a Chinese manufacturer that has made a boom with audio lovers by producing great bang for the buck devices. 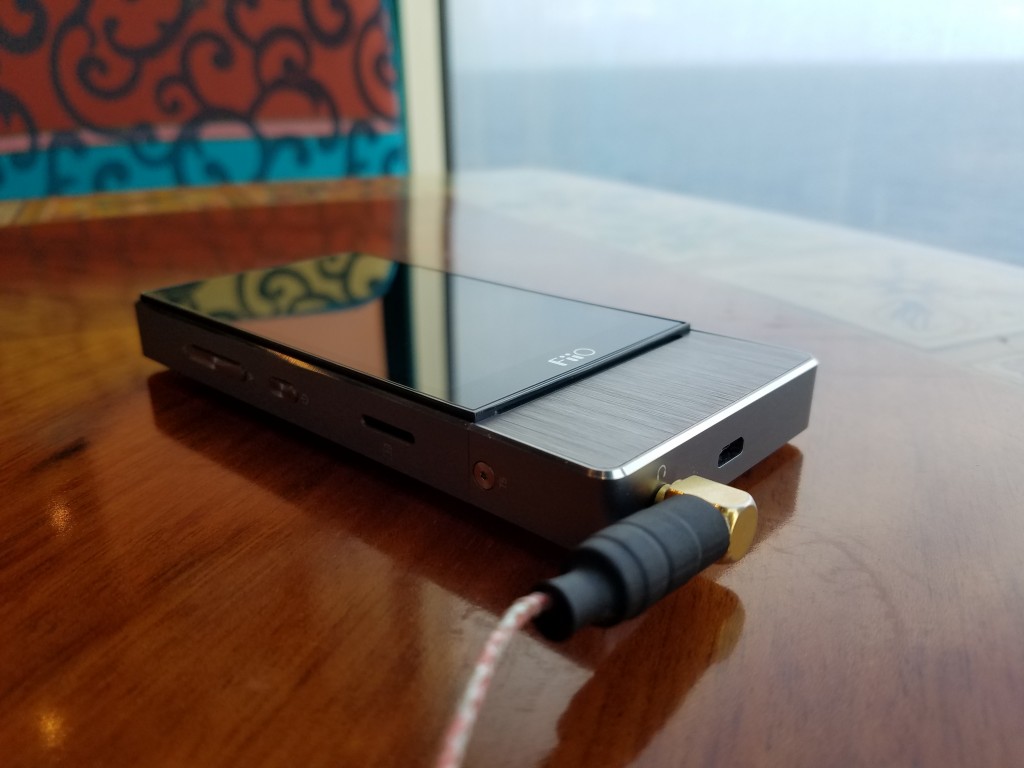 However, the X7 isn’t such device. It’s new territory for FiiO – a premium flagship (with a premium price). And Android is along for the ride. Let’s check out if that was a good move. 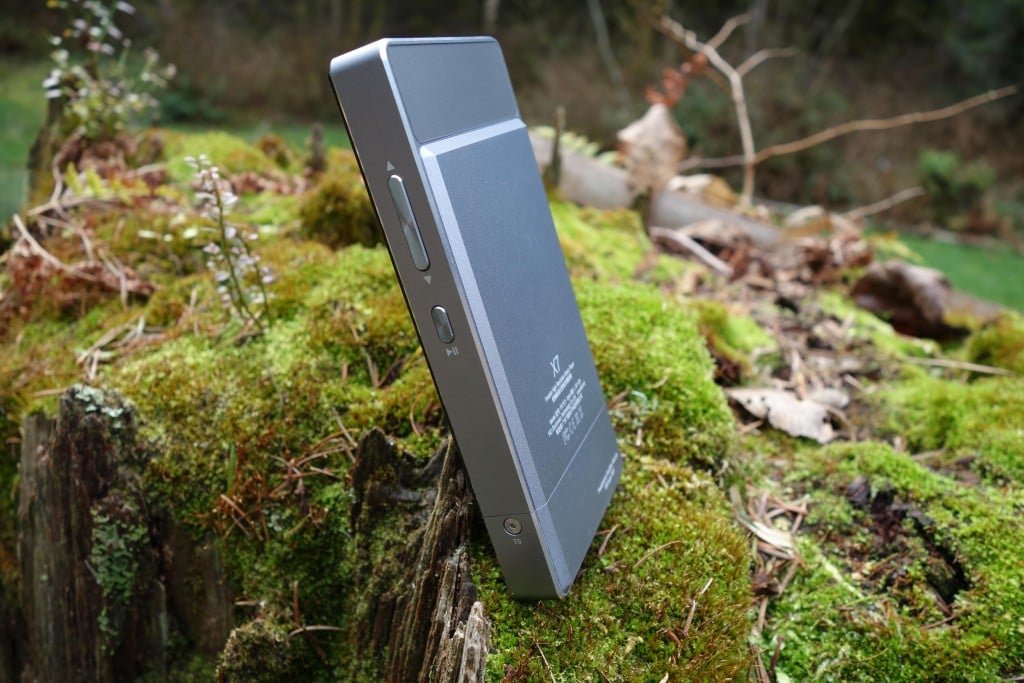 FiiO takes the typical “premium” approach to design with the X7 by building it from a block of metal. That’s no understatement. It’s thick, as if FiiO doesn’t care whatsoever about device thinness like the rest of the industry does.

I’m personally not one to care for the thin fetish that surrounds mobile devices, but the X7 does manage find my limit. It shows through a pocket and is heavy (220 grams). It’s not a huge deal, but I wish that FiiO would have recognized the considerable girth and worked it down.

If we look at the profile, you’ll see that part of thickness is attributed to a hump on the back and an elevated display. It would have been nice if the front and back were flush with the body, and the protruding display is a bit worrisome. That makes the glass more vulnerable to life’s perils.

FiiO put in some nice looking design cues in the metal to up the aesthetics. The edges on both front and back have a shiny chamfer, the finish on the metal is super smooth, and the physical buttons have a flashy circular texture. 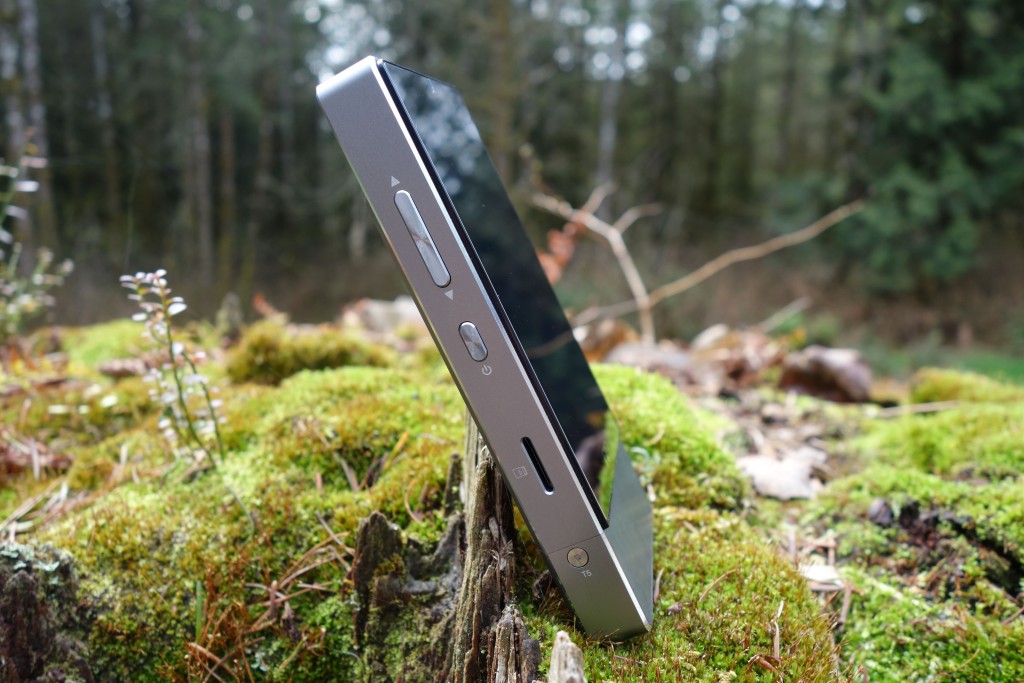 The panel under the display has a sweet brushed-metal look. Something you won’t notice until you turn the X7 on is that there’s a blue light embedded between the glass and metal. There’s no real purpose for it that I can tell, I think it’s just merely to look cool. 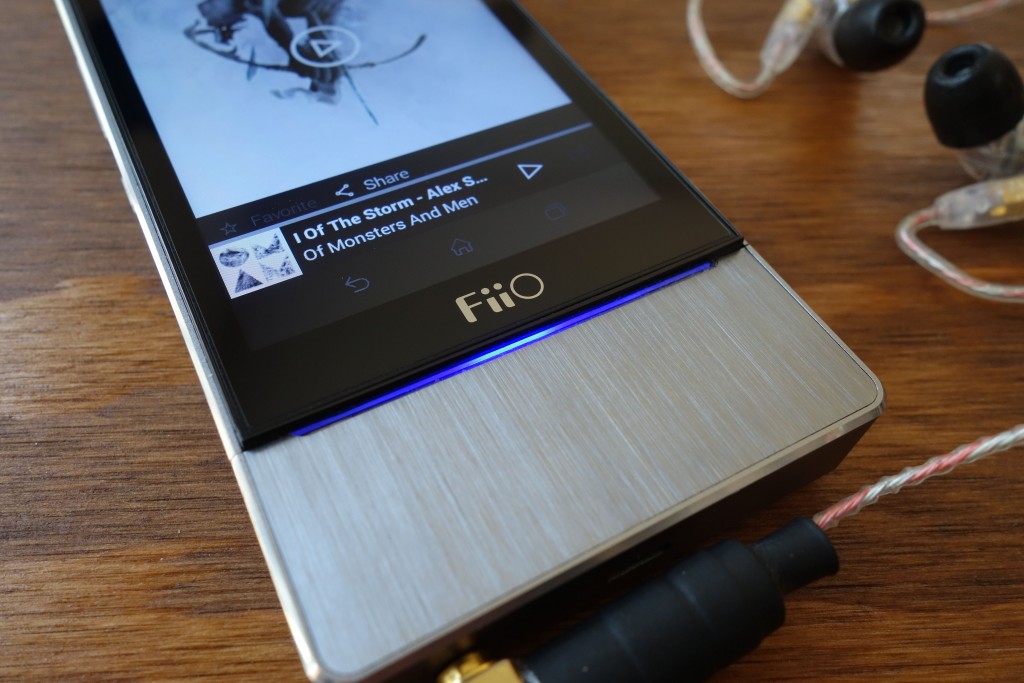 You’ll notice a symmetric button layout on both sides. The left side has the power button and volume rocker, and the right side has the play/pause button and back/forward track rocker. Also on the left is support for microSD expansion – always a welcomed feature. You can drop in up to 128GB extra on top of the on-board 32GB.

The bottom of the X7 is pretty simple; there’s the 3.5mm headphone jack and microUSB port. 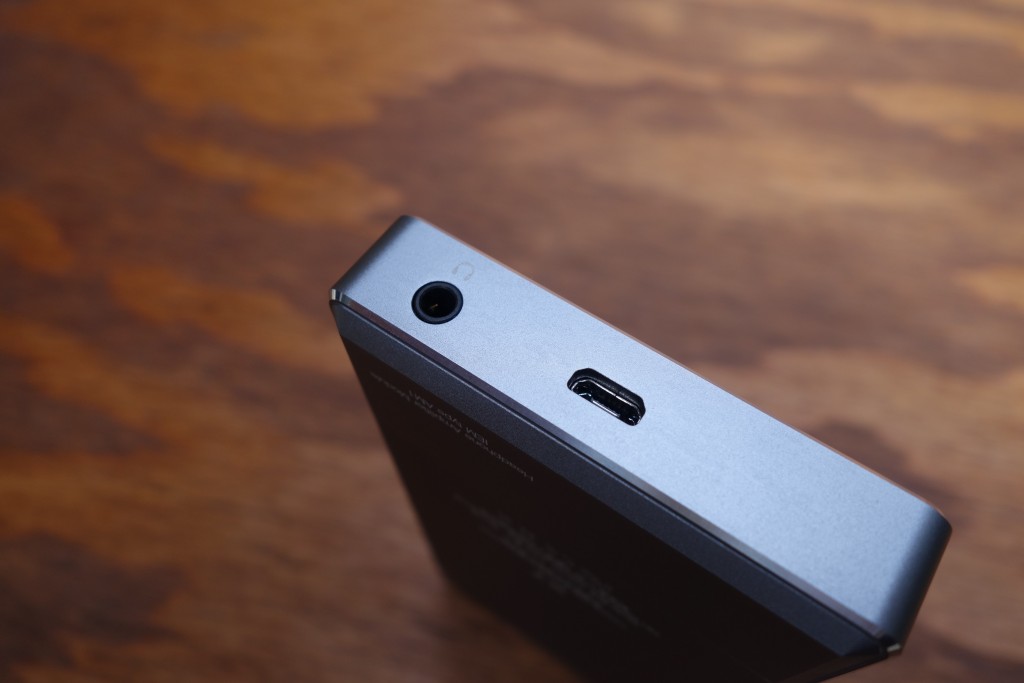 But there’s actually more than meets the eye here. The portion of the X7 below the display is the amp component and is removable via the T5 Torx screws on the sides. FiiO designed the device to be able to accept different amp modules for headphones with higher power requirements. The unit comes with the lowest power module installed (which works just fine with most headphones), but if you find yourself needing more volume headroom, FiiO produced two higher power tiers that you can purchase. There’s also a module that can do a balanced output.

Lastly, on the top of the X7, you’ll just find a 3.5mm jack for line out or coaxial output. 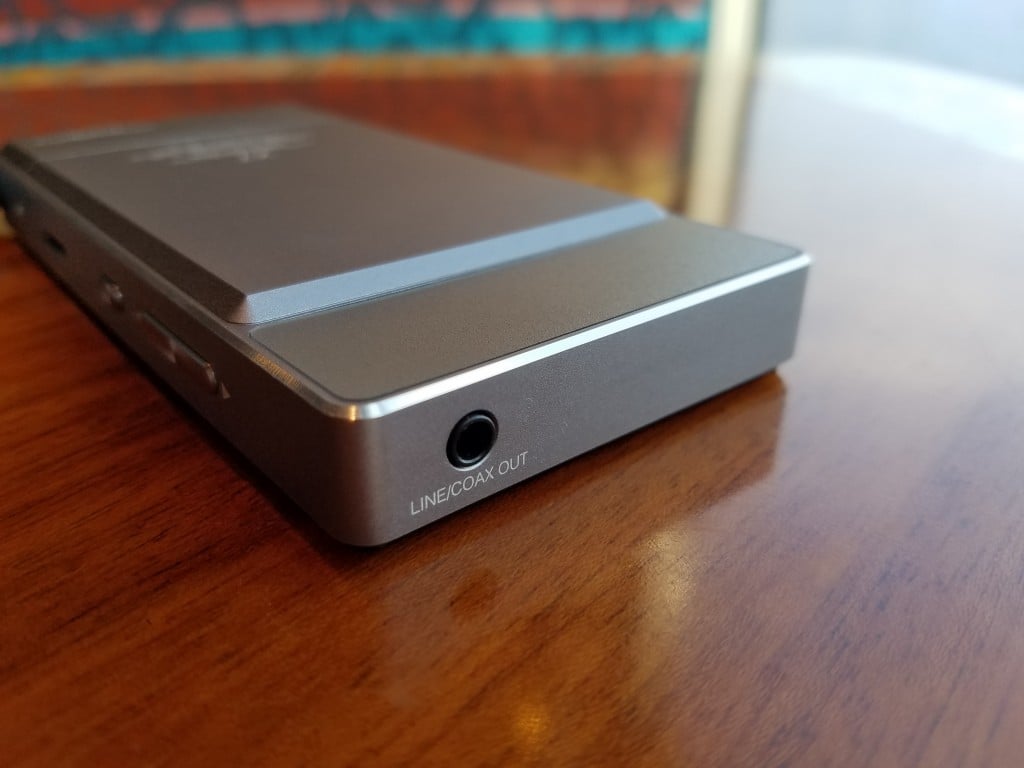 Let’s take a look at what’s under the hood.

The core specs are yesteryear, but this is a digital audio player first and foremost. FiiO packs the X7 where it counts in that regard – there’s a hefty battery, plenty of storage, and a proven digital-to-analog converter (DAC).

The performance is where you’d expect from a lower spec’d device. It gets the job done, but doesn’t necessarily fly. In my use, there was the occasional hiccup, but navigation has been surprisingly smooth overall. 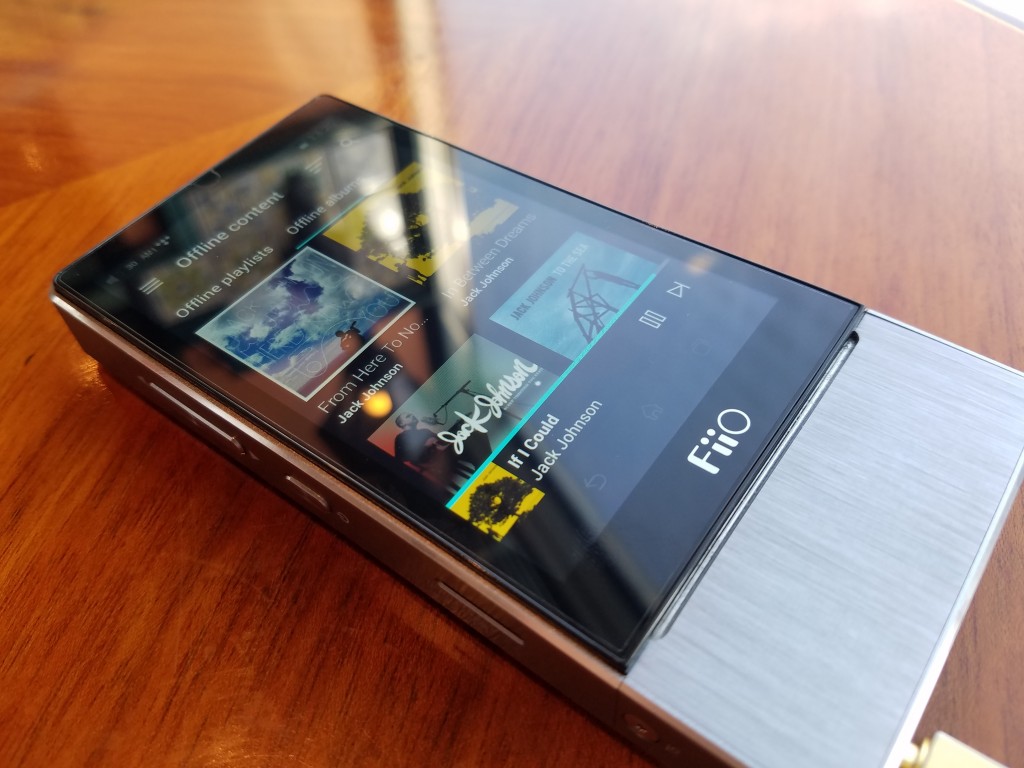 The same can be said for the display. It functions just fine. The low resolution is a little hard to swallow if you’re a snob like me, but the fact that it’s a small 4″ size helps the ppi a little bit. Viewing angles are decent; the image slightly dims but you can see the content at even the most extreme angle.

The 3,500mAh battery performed well in my experience. I typically stream HiFi music using TIDAL over WiFi and the battery dissipated roughly 10% an hour. With my on/off usage, I was glad that the X7 minimally sips battery on idle. You can further efficiency by setting the device to turn off after a certain time. And of course, the battery life is a little better on offline mode.

*It’s crucial to update the firmware upon receiving the X7. FiiO has since made important updates, such as sound quality improvements and additional software features. This review uses Firmware v1.8.

I was somewhat surprised to see that the X7 runs a pretty old version of Android – 4.4.4 (KitKat). Any newer Android device should be at least running Lollipop. But it is what it is. The X7 is meant to be a digital audio player with Android capabilities. Let’s go over what that means. 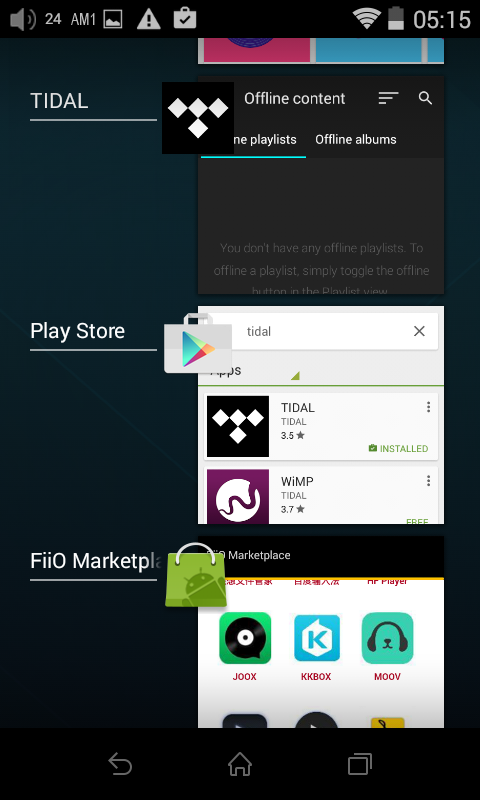 FiiO subtly but heavily customized Android for its own. When you boot up the X7, you’re greeted with a fairly bare-bones, stock interface. You’ll however find significant tweaks here and there. For instance, the top pull-down has a tile layout of different functions, as opposed to notifications. This isn’t a phone, so notifications aren’t so crucial. Weirdly, sometimes the pull-down does show me notifications. And I, for the life of me, can’t figure out how the system decides to show me either the tiles of functions or notifications. I’d be nice if FiiO incorporates a way to flip between them.

The lock screen always shows the basic playback controls – play/pause and previous or next track. Fortunately, the controls aren’t just tied to FiiO’s own music app, but third-party services as well. That goes for the X7’s physical button controls too. I use TIDAL for my HiFi listening, and had no major problems with integration on the X7. The only bug that I found is when you pause the music for a while, the play button doesn’t reinitiate it. You have to go back into the app and hit play.

You’ll also find that FiiO made some additions to the system settings. Under Sound Settings, you can change the Gain (amplification) between High and Low, or alter the L/R channel balance. Some folks (including myself) found that blue light on the front of the X7 to be annoying in dark environments. Within the Display settings, FiiO considerately added control for its brightness and status when the device charging or playing (the light can be lit, pulsing, or off).

Unfortunately, there is no global EQ setting. The custom FiiO music app keeps its 10-band, customizable equalizer for itself. 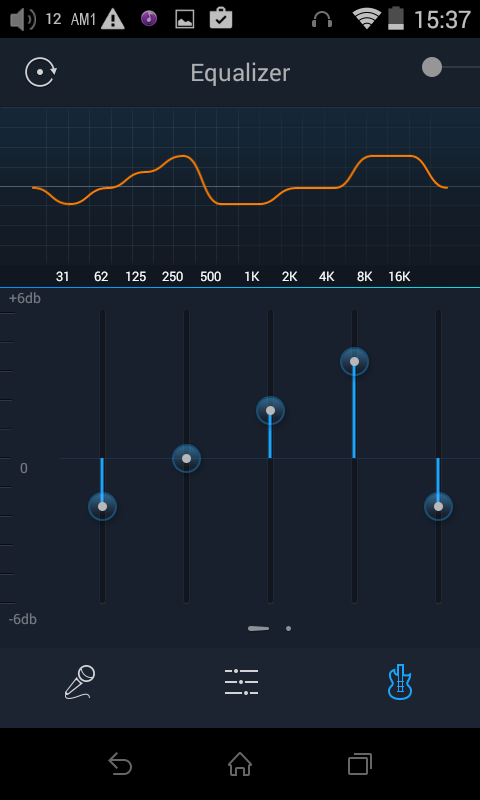 Speaking of the FiiO music app, it’s nicely user-friendly. The app scans device’s storage for any music and organizes it in the interface. Navigation is pretty intuitive, except, you may not know what some of the icon buttons mean until you try them. Tap the Now Playing bar on the bottom to expand it. You then have typical playback controls, a favorites button, and a shortcut to the EQ. The settings cog shows up on the top left corner. There’s not much more that the app’s settings offer than the system’s sound settings, it’s mainly options for the app’s UI.

*For my testing, I used the X7 with Sennheiser IE 800 and Shure SE846 earphones. 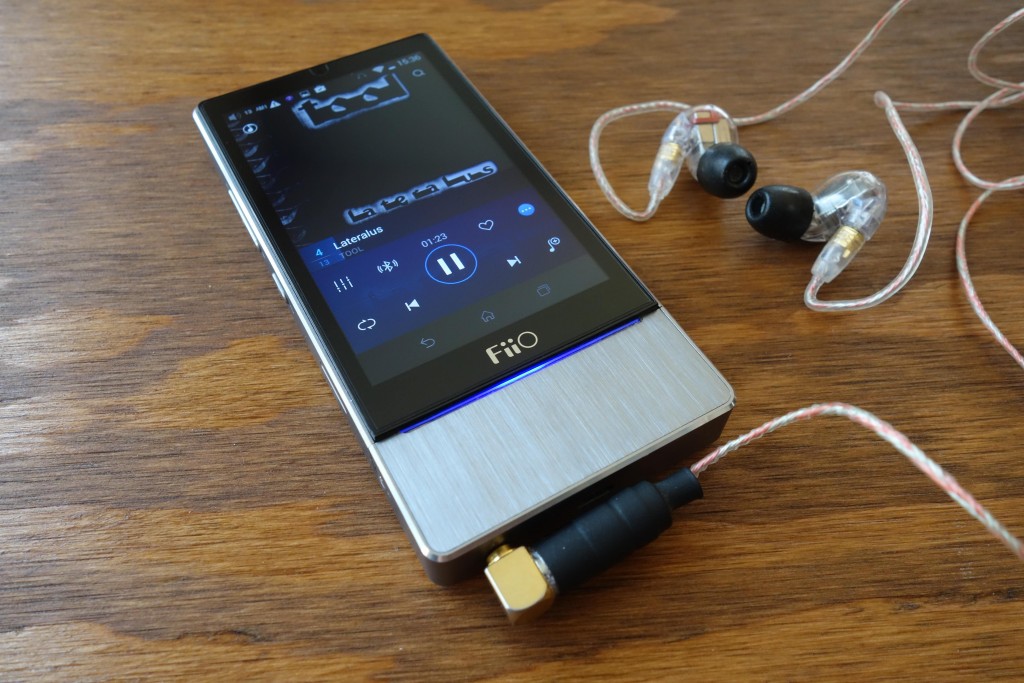 Being that the X7 is FiiO’s top-end audio device, you can probably guess that the sound is killer. Indeed. Let’s go over how it excels and what you should know.

Overall, the sound is clean and concise. This is what a DAC should do – articulate the signal so that you can clearly hear each element of the sound. You won’t find muddied frequencies here.

The treble and the soundstage are two aspects that stood out to me, and made my headphones shine. The X7 gives highs a wonderful presence, where sometimes inferior DACs allow the detail to get lost in the mix. The soundstage is satisfyingly wide. It brings another level to the music and experience.

The mid-range frequencies are right behind. Shure’s headphones are known for prominent mids, and together with the X7, I get full power from my SE846 earphones. Guitar strums feel like they’re right on your ears. I have heard deeper vocal details from the iFi Micro iDSD DAC I’ve reviewed, but the X7 isn’t far behind.

However, the X7 is “reference” sounding to my ears. That’s not necessarily a bad thing; it depends what you like. To me, the sound could be livelier, particularly on the low-end. The bass detail is great, but I could use more oomph. I wish that FiiO had included an analog bass boost like many audio manufacturers do on their units.

I must mention that at times I hear some static noise when streaming music. I checked with FiiO and turns out that the X7 can transmit some interference while listening on WiFi. In this case, it happens when the tracks buffer (for a few seconds). You can check out their response on Head-Fi.org, but in short, that’s just how it is on the X7. Adding interference resistance could compromise audio quality, and FiiO does not want to risk that.

That’s understandable, and you could download offline content from streaming services, which would bypass the interference. I just can’t help feel like device isn’t finished until this issue is addressed. The X7 is marketed as an online-capable player; it should be able to do that efficiently. The FiiO X7 is a great device overall. Is it perfect? No. There are a few standout things that need work. It’s too thick, the Android version is old, and there’s some interference noise when streaming. But I figure that these concerns would be minor to most audio lovers who pick this up. We can’t forget that the X7 is a dedicated audio player above all.

But then I look at the steep retail price tag – $700. My feeling is that a device like the X7 should be perfect at that price-point, and have more audio features (like a bass boost or balanced output out of the box). The amp module concept does add some uniqueness and versatility, so props to FiiO for that. There also aren’t many Android HiFi players out there, and the X7 is a real fine one out of the bunch.