While my true passion is Android, I do enjoy taking some time off to play some games. My chances have dwindled as I’ve gotten older and my life has filled up and that makes me appreciate the opportunities I have more than ever. More than just playing games, it’s a chance to hang out with friends from across the country and accomplish something challenging.

So, even though I don’t get many hours in, it’s important to me to have good and fun gear that I can count on when I get to sit down and play. Additionally, I want my gear to be reliable and hold up for the long term. No one wants to have to deal with controller pairing issues or audio cut-outs, especially when you only have a few hours a week in the first place.

Some of the items on the list I’ve owned forever on my own dime and some were sent over for review from the companies. All the descriptions and opinions are my own and in no way influenced by how I came by them. 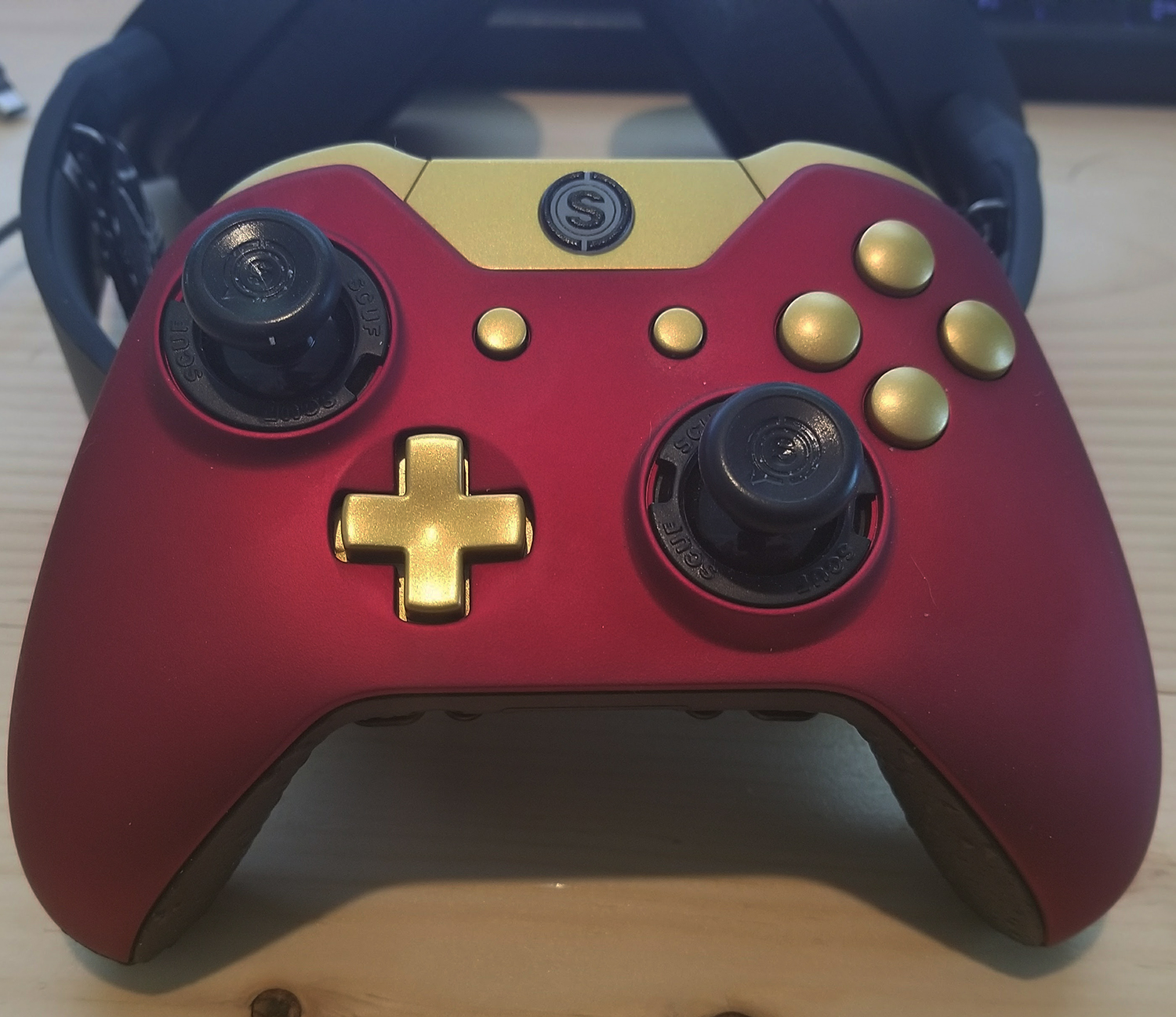 While I play games on multiple platforms, most of my time is spent using my Xbox One. Most of my friends are on the platform and the games that I love are here too so it’s a good match. I’ll be moving more toward PC gaming in the next year or so (Destiny 2 on PC!) but for now, the console it is.

I’ve had an Xbox Elite controller (yep, the one that’s about $150) since right after they were released. Unfortunately for me, it has fallen apart on me. I love the thing but the build quality just isn’t there. Unfortunately, I’m not the only one. In my small group of gaming friends, three of us have had the same issue.

That’s why I got a SCUF controller. SCUF controllers are like Elite controllers but much, much more customizable and higher quality. on SCUF’s site, you have endless color options including player and e-sport team-endorsed designs for such big names as OpTic, Faze, EnVy, Luminosity, Evil Geniuses, Clayster, Nadeshot, and a ton more. One of the harder decisions I had when ordering mine was picking the design I wanted because there are so many fun ones on there. You can also customize the hell out of it. You have your choice of thumbsticks, D-Pad, triggers, paddles, and grips and normally you have multiple options in each category. One of the bigger advantages of a SCUF controller over one the basic Xbox controller are the customizable paddles on the back. By default, the paddles are programmed to the face buttons (A, B, X, and Y on Xbox) so your hands remain in a more comfortable position and your thumbs never have to leave the thumbsticks. The paddles are fully remappable and I prefer the vertical layout of the SCUF controller over the horizontal layout on the Xbox Elite controller. It took a while for me to get used to them, but now I can’t imagine playing without them. 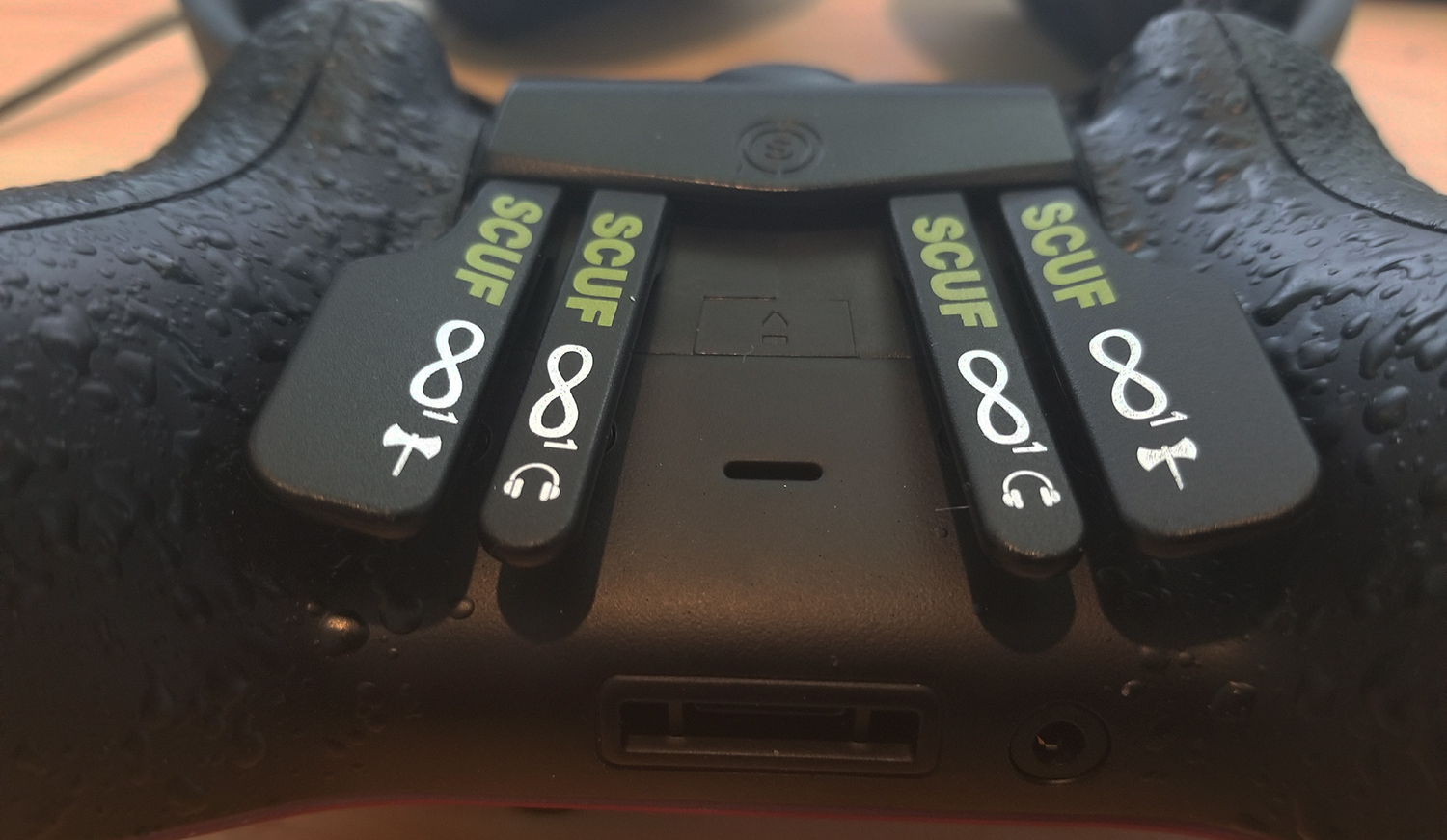 The SCUF solution is much, much better. The hard plastic will last an indefinite amount of time if treated correctly and since they’re user replaceable, you can just swap them out for another pair in a few seconds. Literally, the only issue I’ve ever had with the SCUF controller in the few months of owning one was that the hair trigger control built into one of my grips was causing me to not be able to fire my gun in Destiny. I’m fairly sure this was just me not being able to adjust the sensitivity of the hair trigger limiter with the included key and not a design flaw with the controller, but regardless, I was able to just swap out grips to a different pair that didn’t have the issue and was on my way. 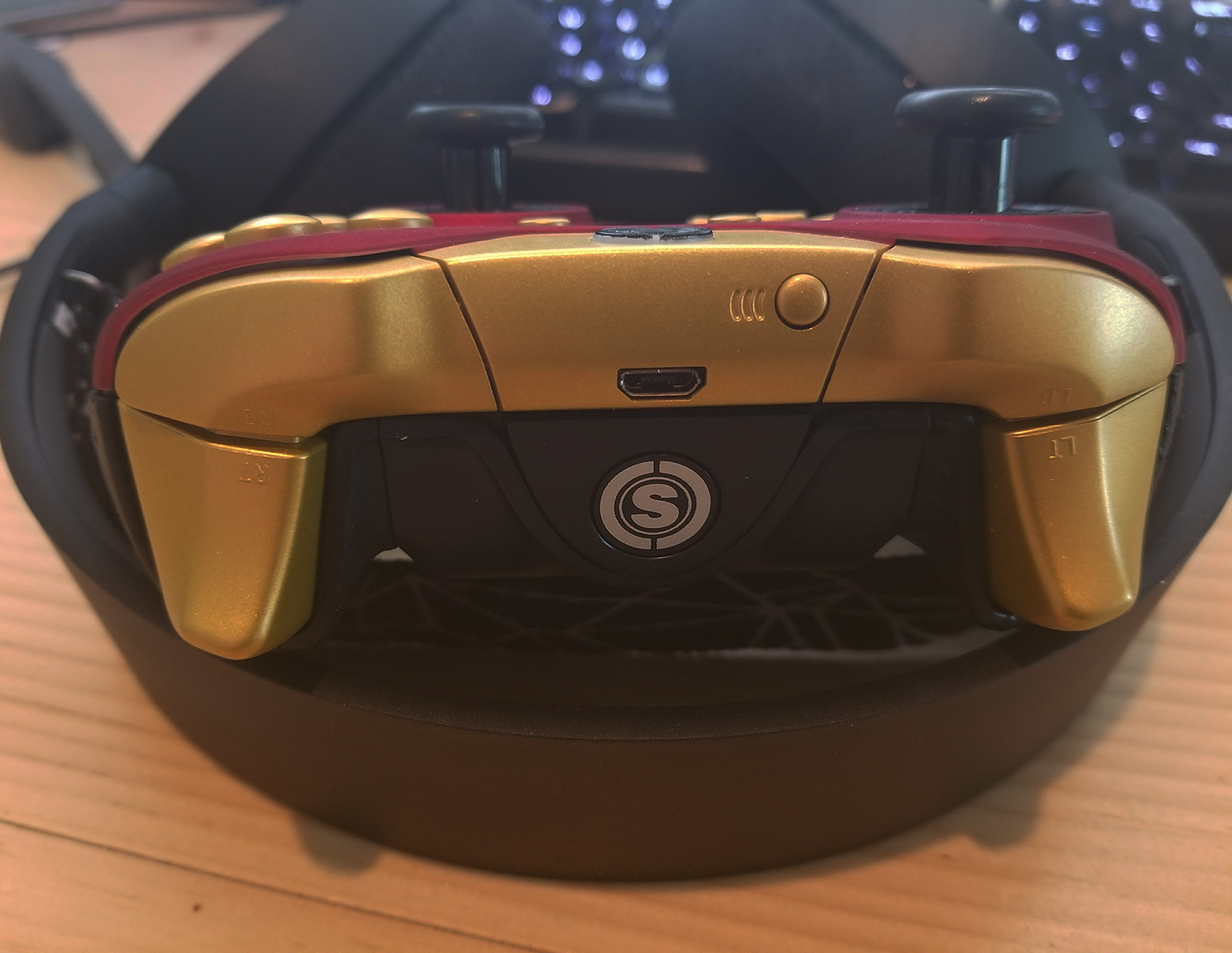 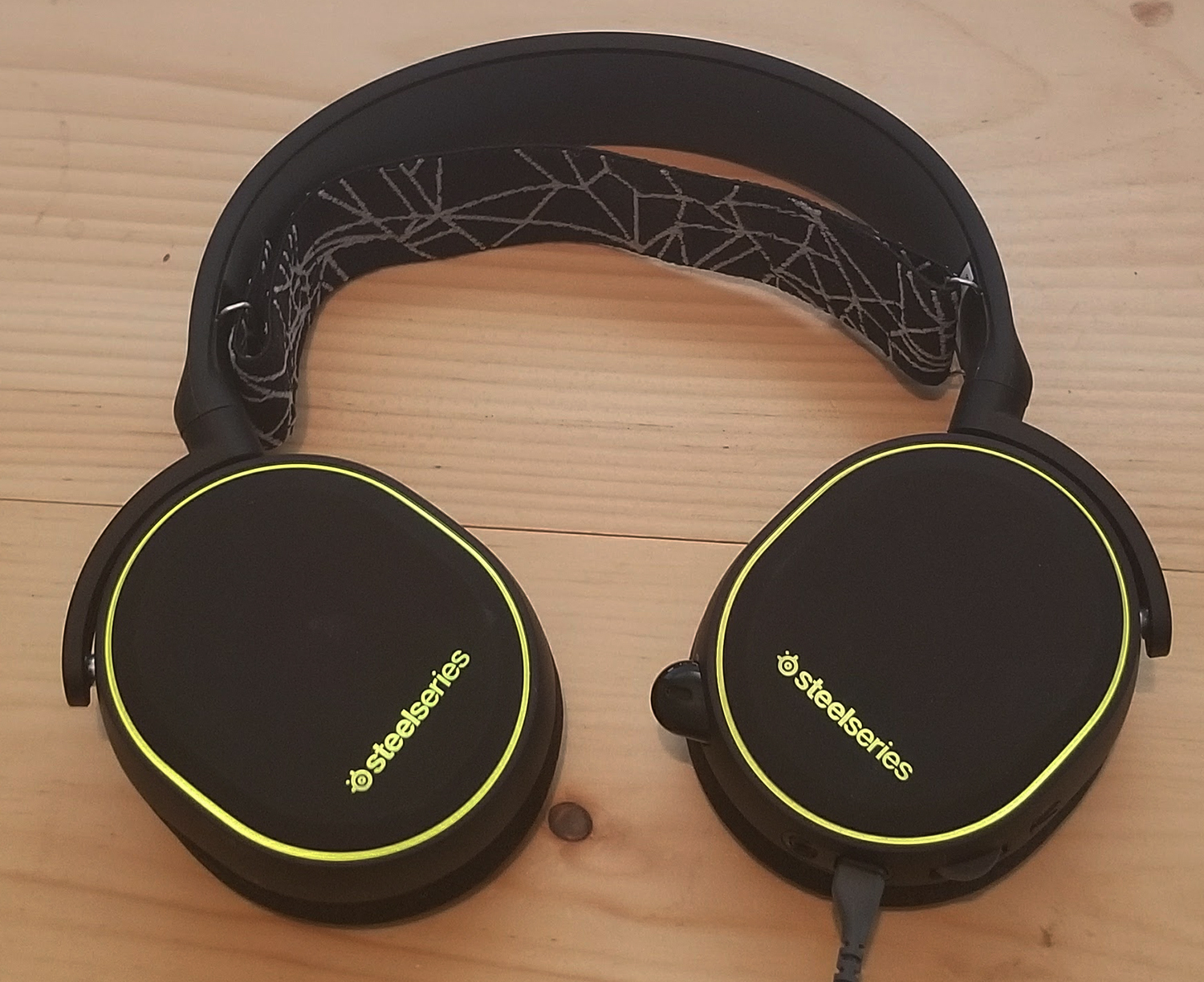 I love a good headset. It started with my minor obsession with finding the best headphones I could (I settled on Sennheiser HD589Cs) and transferred into finding the best gaming headset I could too. For my Xbox, I have both the Turtle Beach Elite Pro and Turtle Beach 800X, but for my computer, I use the SteelSeries Arctis 5. I was originally sent these for a review but they quickly turned into my go-to headset for not only gaming but music too. The headset band is made out of hard, rigid plastic that has enough flex to fit bigger heads (I’d know, trust me) and provide enough squeeze to keep the headset on your head when whipping around, but not so much to where it’s uncomfortable. The earcups are a soft fabric that feel nice to the touch and breathe more than a higher-end leather earcup might.

The outside of the earcups is a soft plastic that can pick up some fingerprints when you’re taking them on and off. You may not notice the fingerprints, though, because you’ll be too busy staring at the RGB LEDs that line the outside of the earcups. I was never caught up in the RBG LED craze, but it really does look awesome hanging on my Just Mobile headphone stand. Just above the earcups and just under the headband sits a cloth secondary band (called a Ski Google Headband by SteelSeries) that contours to your head. It took a little getting used to because I don’t entirely love how the fabric feels on my hair, but it does a good job of eliminating neck and head fatigue. You can also purchase different bands with differing designs on them to fit your look. 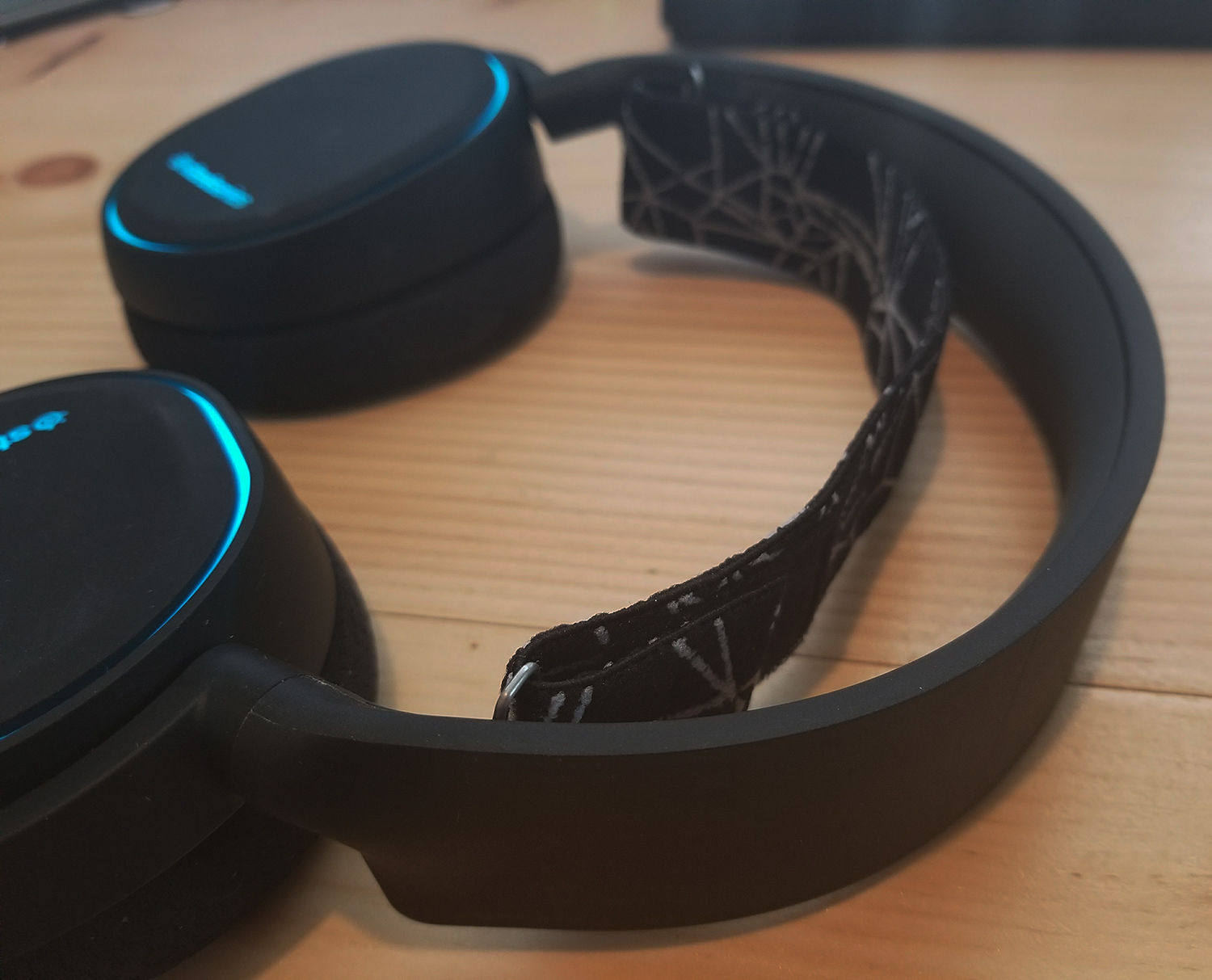 The drivers under the cloth earcups are angled toward your eardrums for perfection in terms of audio quality. Using these in shooters was pretty fantastic to establish where exactly enemies were coming from while games like Civilization with excellent audio mixing sounded great as well.

Speaking of audio, you can share it with a friend. There’s a 3.5mm jack on the headset that you can plug another pair of headphones into and share your audio. The only time I could ever think that I’d use this is watching a movie on a plane, but even then, Bluetooth headphones would seem like a more obvious choice. Having this feature included doesn’t hurt anything or jack up the price (the Arctis 5 are only $99) but it seems like a bit of a waste. The microphone sounds really, really good. I normally use a Blue Yeti microphone on an arm while PC gaming, but there wasn’t a ton of drop off in terms audio quality. The Arctis 5 is definitely good enough to use as your main source of audio if you’re playing games or recording podcasts for fun with your friends. I wouldn’t recommend it for high-end tasks, but you’ve probably already invested in high-end audio equipment if that’s your use case.

The only time that I ever got any comments about the microphone quality is when I bumped it. It will pick up those minor bumps and scrapes and transport them directly into your friend’s heads. Also, the microphone stays on when you push the arm back into the headset. You’ll need to use the mute button located next to the volume slider on the left earcup.

The USB cable from the headset runs into its own USB ChatMix dial. This dial, when set up correctly in windows, allows you to control the chat and game mix with the dial that sits on your desk. I like the ability to drown out chat at important times and only hear the game or bump up chat volume a little bit depending on who I’m playing with. The connection uses a USB type-B connection which isn’t that common anymore so to use this with your phone you need to connect it to the included USB type-B to 3.5mm adapter. The audio that comes out of these headphones feels like it has a nice balance. None of the mids, highs, and lows feel emphasized too much. Loud bassy explosions feel satisfying without vibrating the headset off your head while voices come through clear and crisp. Music is a joy to listen to if you’re looking a headset if you’re looking for something you can use for both gaming and music. In the land of tomorrow, everything must be RGB. Jokes aside, no one really thinks an RGB mouse pad is a necessity for gaming, but damn if it isn’t cool. The QCK PRSM is big, heavy mouse pad that stays put no matter how much I bump it. It has soft plastic on the bottom to make sure that it isn’t moving around when you need stability the most.

The top of the mouse pad comes with a swappable secondary pad. The default side is a hard plastic pad that is great for quick movements and adds zero friction to your use. Flip it over and you get a cloth pad that is great for more precision style games. Just outside of the pad is an LED strip that frankly looks awesome. It isn’t in your face or distracting when playing games at night. I love the default flow pattern that looks like a steady stream, but you can customize how it looks through the SteelSeries software.

One of the things that SteelSeries took great care to do is place the USB cable on the left side of the mouse pad. If you use a wireless mouse like me, it doesn’t matter a great deal, but the design keeps the USB cable out of the way of wired mice, which is important when you’re playing twitch shooters like CSGO.

I can’t say that the QCK Prism has upped my game or made me better in any way, but damn if it doesn’t look cool. I love that it doesn’t slide around at all (it’s 2 lbs!) and you can control the LEDs in software. The build quality is really excellent so I think if you’re looking to shell out a little bit of money to complete your LED build, this is definitely something you should look at.

These are just three of my favorite new gaming toys. I’d like to thank SCUF and SteelSeries for passing along some samples for me to try out. I found it pretty quick and easy to integrate the controller, headset, and mouse pad into my routine since they’re all pretty high-quality products and upgrades on what I was already using.

We know that this isn’t our normal type of content but often times the readers that read AndroidGuys are attracted to subjects like this. If you’d like to see more articles like this that aren’t specifically about Android but have some overlapping interest, let us know down in the comments and we’ll be sure to effort some more. Don’t like these articles? Feel free to let us know that too. Anker’s audio and charging lines deliver quality on a budget Arctis 3 Bluetooth review: Did these headphones change the game on gaming?