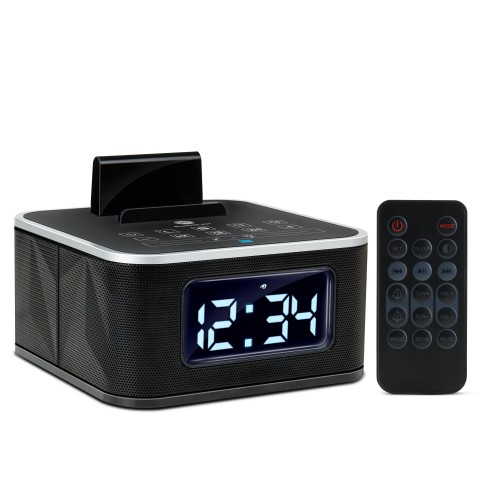 [dropcaps]I love when products evolve to keep up with the times. With the success of the smartphone came the death of some dedicated devices for many people, such as the compact camera, mp3 player, and home phone system. Also, remember the days you had a dedicated alarm clock by your bedside? Where you could satisfyingly slam on the snooze button whenever that dreadful sound started up?[/dropcaps]

Well, GoGroove is trying to see if that dedicated alarm clock could make a comeback, packed with a multitude of modern functionality. Allow me to introduce the BlueSYNC RST. 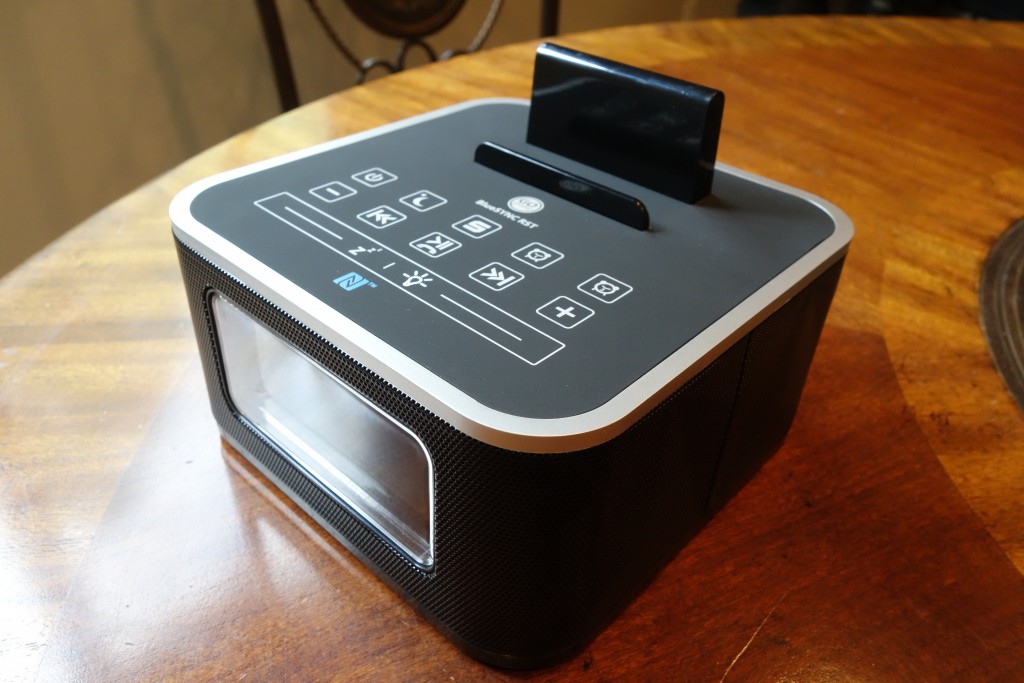 At its core, it’s an alarm clock, but it doubles up as a bluetooth speaker. And for another modern touch, you can effortlessly tap your phone on the top of the device and quickly pair via NFC (if your smartphone has it – I’m looking at you OnePlus). Let’s check it out.

The design of the RST is fairly basic. We essentially have a cube (almost). Display is on the front, controls are on the top, speakers fire from the sides, and I/O is on the back.

The build is plastic, as one would expect. It’s a suitable plastic; I don’t get a feeling of cheapness or that the device will fall apart whatsoever. Although, it’s just meant to sit in one place, primarily being an alarm clock. GoGroove has been in the accessory game for a while, and quality with this device meets expectation. 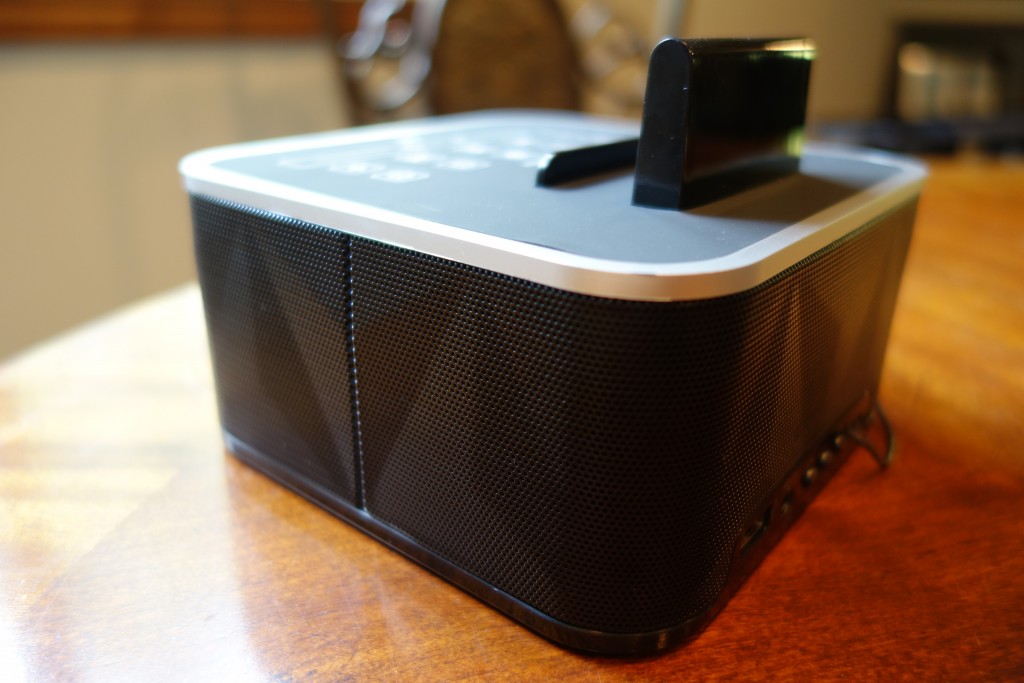 I like the feel of the plastic up top, which is great because this is where you’ll interact with the RST the most. It’s a smooth, soft-touch material. The buttons are large, which I appreciate, so they’re clear to tell apart and easy to press. They also have a satisfying click when pressed. 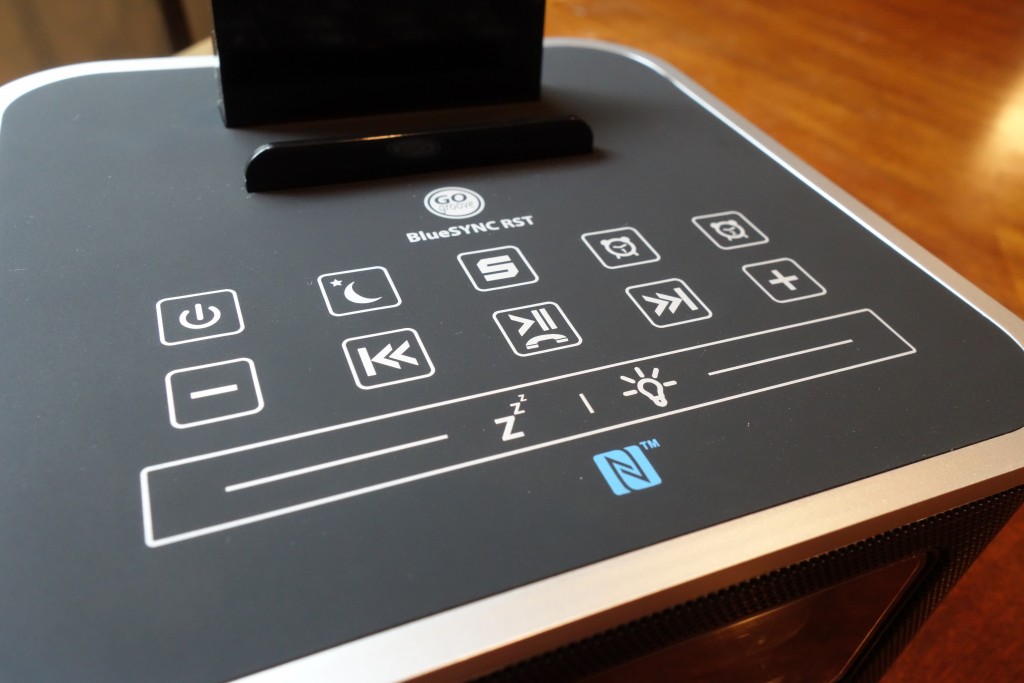 Most of the buttons are clear to their functions, such as the “Zzz” to snooze, volume up/down, or power button. For a couple of them, such as the “S” button, a quick look at the manual got me up to speed (it’s a Source selection button). The NFC button stands out most of all, distinctly colored in blue.

The display on the front is big and bright. The font is in a digital clock form and has a blue-hue. The different functions light up as they’re activated, such as Bluetooth pairing or a set alarm. No complaints here, the display does its job. 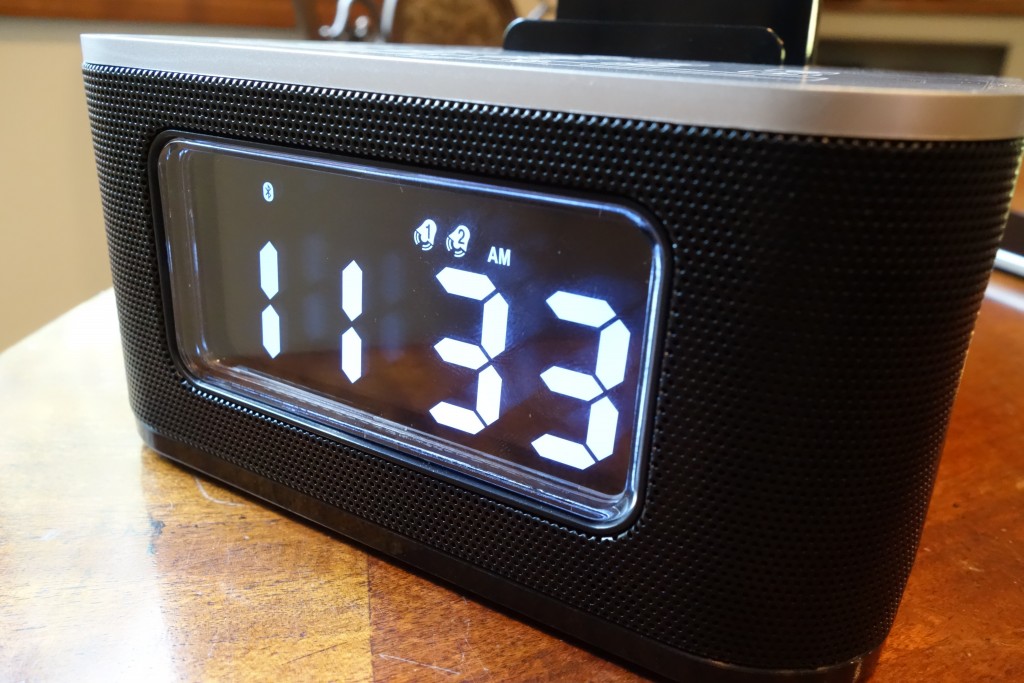 You may have noticed a small structure sticking out from the top. It is conveniently a smartphone/tablet dock. GoGroove did not forget the fact that your phone is still going to be by your bedside, so there’s a nifty place for it to rest. 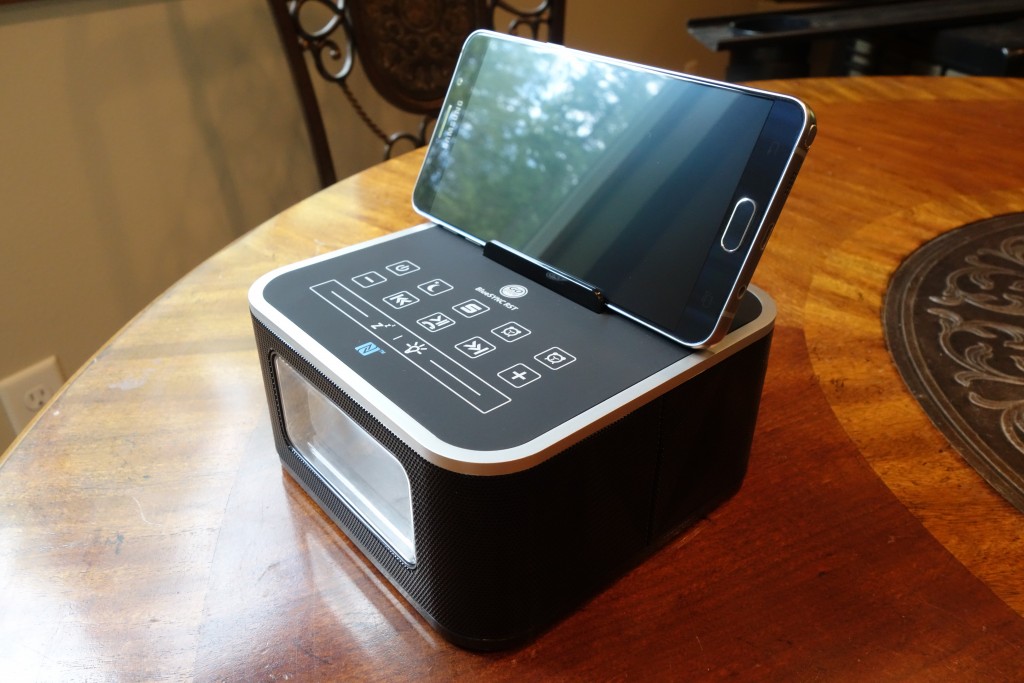 While this is a nice and thoughtful addition, I wish GoGroove would’ve incorporated wireless charging somehow. This could’ve been a significant selling point. There is a wired way to charge your phone, via a USB outlet from the back of the RST. Just bear in mind you may need to rest your phone horizontally on the dock, if the placement blocks your microUSB port.

There is a slight learning curve for setting up the alarms and settings, but nothing a quick look at the manual doesn’t solve. There are two alarms, which is great for redundancy in my case. I’m a heavy sleeper and sometimes don’t remember turning off the alarm.

I had a slight hiccup with getting connected the first time. I placed my phone on the NFC symbol, but it wasn’t pairing. I figured out that you have to press the power button first (then the bluetooth symbol lights up), and then you can pair. I’d argue that the RST should automatically turn on bluetooth as soon as it detects an NFC contact. After all, the point is to be effortless and intuitive. But it was a minor hiccup.

Setting the alarm is another area I wish was a little more intuitive. When you press the button, it shows “rad” on the display. Press it again and it shows “bu”. I didn’t know what to think of it. Looking in the manual and you’ll find that those are two different sources of which to wake you, “rad” for radio and “bu” for a buzzing sound. You then press “Source” to be able to start setting the alarm time with the +/- buttons. Not the most intuitive system.

As expected, there are buttons to control playback:  Previous track, next track, pause/play, and volume. You can also answer/end calls. GoGroove included a remote with the RST. It’s a nice addition if you mess with the device a lot and don’t want to keep walking up to it. It is compact and includes control for all the functions. 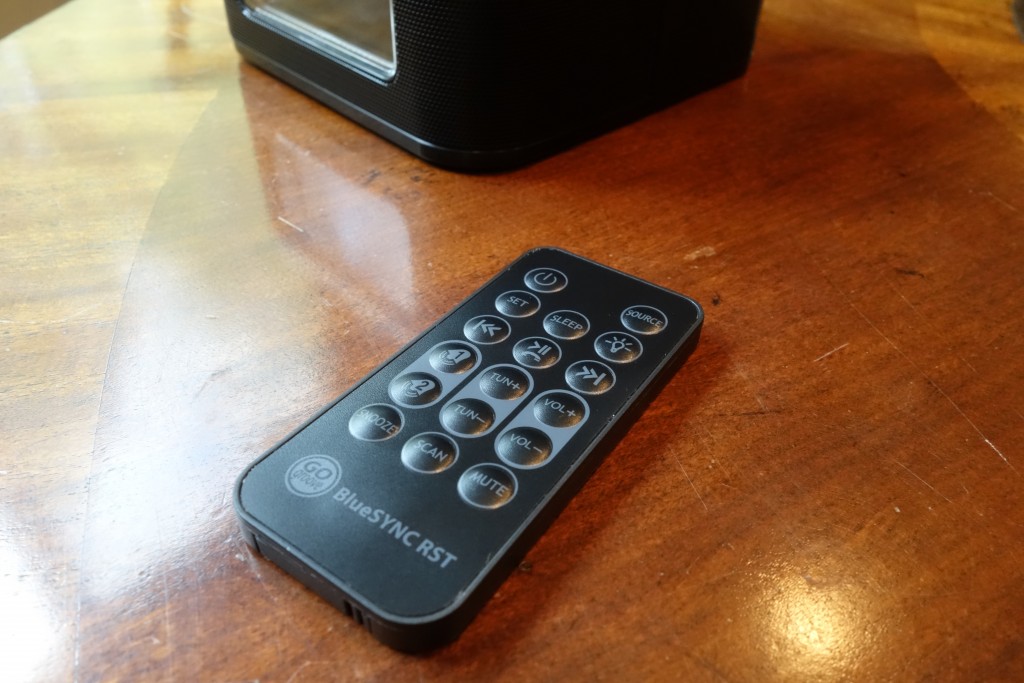 On the rear we have a USB port (to charge your phone/tablet), Aux In (if you prefer to use a wired audio signal), time setting button, volume buttons, antenna (for FM radio), and power input. 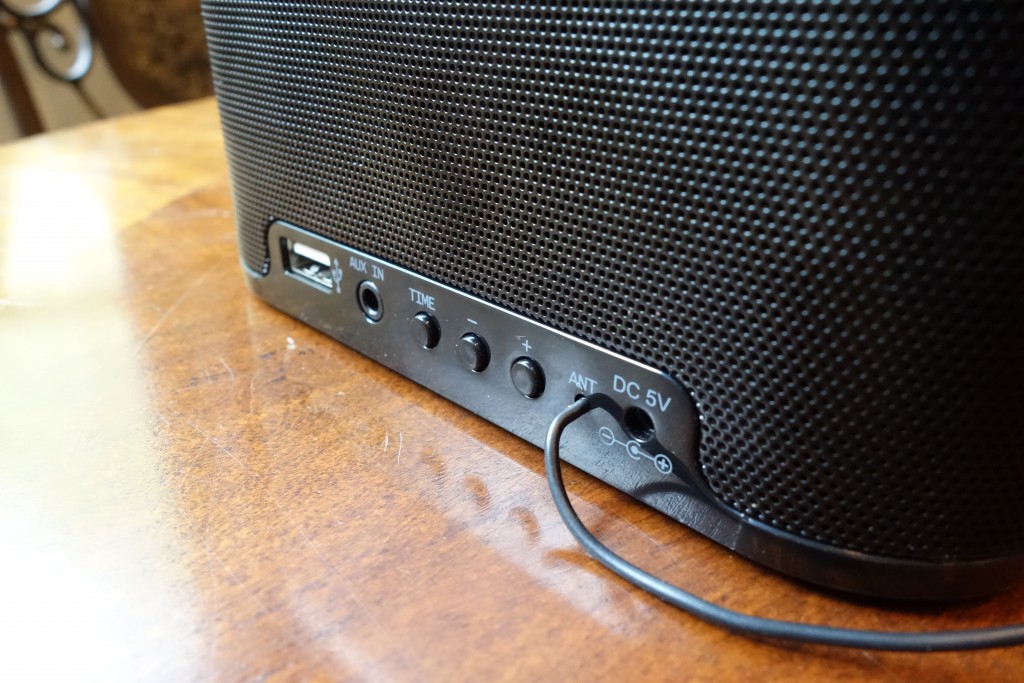 The bluetooth range is great. I managed to get about 50 feet before the signal started cutting out.

The RST has considerably sized speakers, which shoot out from the sides. This isn’t GoGroove’s first crack at bluetooth speakers. With that in mind, I can say that the sound quality was good. It won’t blow you away or replace your more expensive sound system. It gets the job done.

There is considerable loudness, it is good at filling the room. The sound quality is a little on the thin side, but not too bad. Bass is particularly done well in my opinion. It can deliver a satisfying punch.

When I held my ears close to the speakers, I can hear a little static. It may have to do with the antenna, because this thing can also output FM radio. But when giving it a little distance, the music takes over and it’s clear. 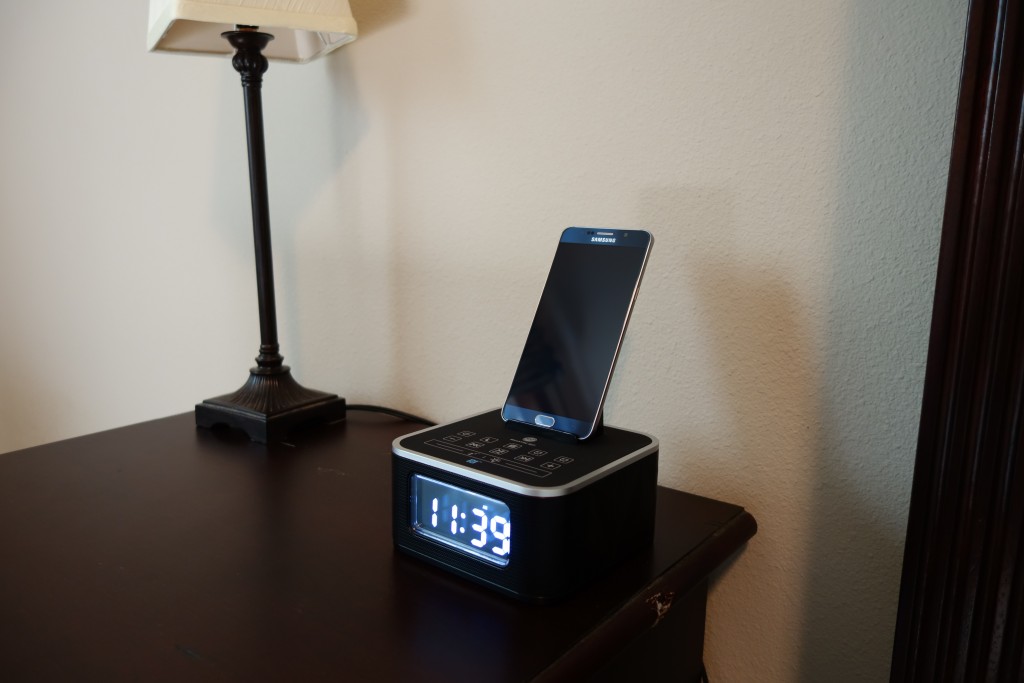 The GoGroove BlueSYNC RST is an interesting device. It’s been a while since I’ve had a dedicated bedside clock. The modern touches add new life to the purpose.

Once I learned how to set it up, it was smooth sailing from there. Although, I would urge GoGroove to make it even simpler, since you might meet some hesitance in asking people to go back to the old ways.

I don’t see everyone buying into this concept, but if you listen to music in your bedroom a lot, the RST should be a consideration. I like how well the sound fills the room, the ease of mind from a redundant alarm, and nice place for my phone to sit.

*GoGroove was kind to include a discount code for our readers (purchasing the RST through this Amazon link). Enter “RSTSAVER” at the checkout and it’ll get you $10 off.  The discount only lasts until Monday, Oct. 5th.