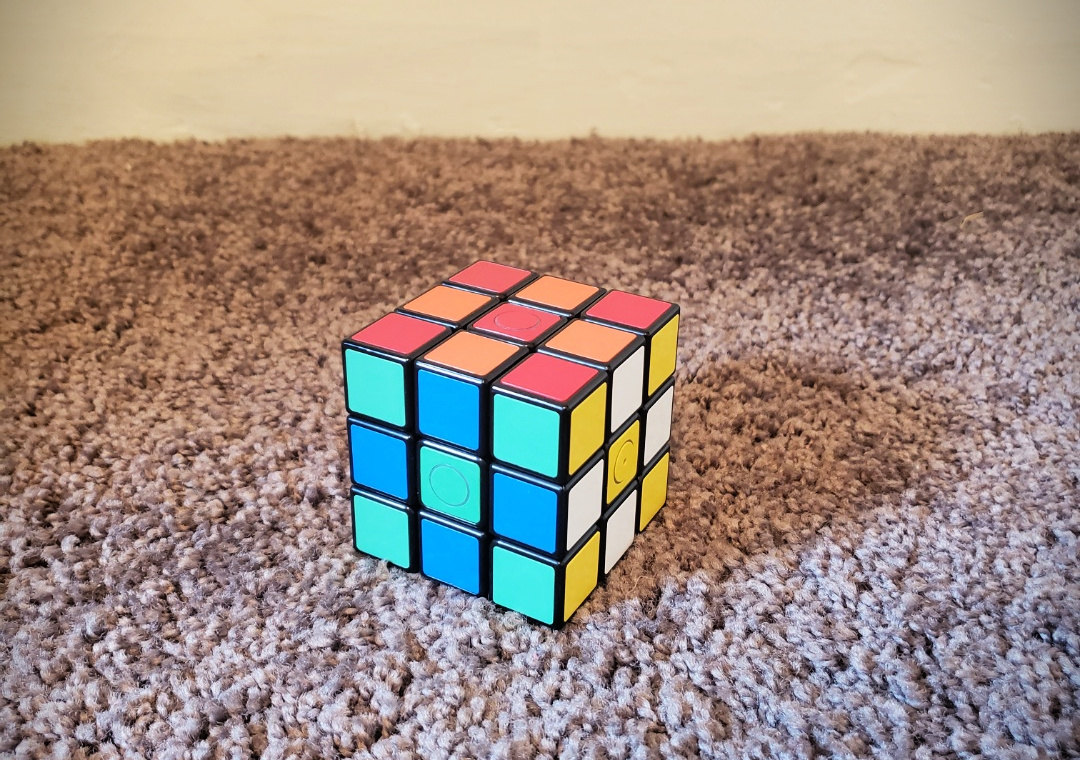 Everybody’s picked up a Rubik’s cube before. Though the concept of a Rubik’s cube may appear simple, the complexities involved in solving the puzzle have entertained logicians for decades. In recent years, the popularity of cubing, in which players compete to see who can solve a Rubik’s cube the fastest, has swept across the internet.

If you’re a logical-minded puzzle fanatic like myself, you may know how to solve a Rubik’s cube or may have even started a collection of twisting puzzles of different geometries as well.

The concept of each of these cubes is always very straightforward. Turn the faces until each face is the same color – that’s all the cube has ever done. The Heykube, however, uses internal processors to bring the Rubik’s cube up to speed with modern technology.

The Heykube is the same size as any other Rubik’s cube – about the size of a fist. The colors on the Heykube are the standard white, yellow, red, orange, green, and blue. Opposite sides are the same colors as a regular Rubik’s cube as well, which makes it easy to pick up and start using.

The Heykube communicates with the user via light-up circles on the center of each face. These circles will light up in a rotating pattern to indicate which way to turn each face. This concept is very intuitive and not difficult to learn.

The Heykube comes in a nice box with an instruction manual that is easy to follow and the charger for the cube.

The Simple Solve function acts as an “undo” for up to fourteen 90-degree turns of any face on the cube. As you make quarter turns on any of the faces, the Heykube uses the circles to direct you how to undo the moves you have made to get the cube back to the solved state.

While I didn’t find this function particularly useful, I suppose it could be neat if you were trying to see the result of a certain algorithm without having to solve the entire cube afterwards. It should also be noted that the circle guides can be turned off by rotating a solved cube through a certain set of moves if they are not desired.

The Learn to Solve function is activated when the faces of the cube are turned more than fourteen times. This function prompts the user to solve the cube using a seven-step method. While this method is not what I have found to be known as “The Beginner’s Method”, it is a very simple way to solve the cube.

The steps are white cross, first layer, second layer, yellow cross, orient last layer, permutate corners on last layer, and permutate edges on last layer. While this method won’t set any world records, this was the first way I learned to solve the cube on my own and it took my solve time below one minute.

I believe that the Learn to Solve function would be useful for somebody who wants the satisfaction of solving a Rubik’s cube without having to memorize any algorithms (the fun jingle that the cube plays when you finish a solve is indeed very satisfying), or somebody who wants to solve the cube on their own and is willing to follow along with the methods described in the app to understand why each move is made.

It is important to note that there is no way for the cube to indicate a turn of the middle layer of a cube. While this is often considered one turn by most cubers, it is considered two by Heykube (by turning each of the outer faces surrounding that middle layer).

The Pattern Solve function of Heykube was different from what I expected. After making a certain set of moves communicated via the circles on the cube or the Keykube app, the colors on the Heykube would make a near pattern across all faces. While this is technically of no value to speed-solving a cube, it’s definitely a neat feature that’s fun to play around with.

If Heykube was a standalone cube, I would have been relatively underwhelmed by its functions. Connecting the Heykube to the Heykube app on my smartphone, however, added several features that I quite enjoyed.

For beginners, the Heykube app has video tutorials on “The Beginner’s Method” that is programmed into the cube. Watching the video tutorials on the app makes the methodology much easier to understand than trying to follow along and recognize the patterns from the lights on the cube itself.

The feature in the app that caught my eye the most, was the timer. Like many other cubers, in the past I was forced to try to use my phone timer to time my solves. While this method is more similar to the timing method used in a tournament, the built-in timer in the Heykube app was definitely something that I desired.

After the cube is scrambled, the user hits the start button in the Heykube app, and the timer begins. As the user solves the cube, the app keeps track of data such as how many moves have been taken to solve the cube.

Once the Heykube has been solved, the app automatically stops the timer and displays the time taken for that solve. Then cube is ready to be scrambled, and the app is ready to time another solve.

The app also stores the data from every solve you’ve made, so you can analyze trends and see improvement. Challenges are also available for specific timed solves.

The leaderboard section of the app shows how the user has performed in these challenges over time. It is also important to not that the lights and sound on the Heykube can be turned off via the app (these features can be distracting during timed solves).

If there was one thing left to be desired in the Heykube app, it would be the ability to practice different algorithms. One of the hardest parts of improving past “The Beginner’s Method” is memorizing all the algorithms for every situation during a solve.

If this were a feature in the Heykube app, I believe there would be little more to ask for. One feature of the Heykube that I did not get to try, however, was its ability to be programmed through a Raspberry Pi.

The mechanics of the Heykube were smoother than I expected. I did not have high expectations for a cube stuffed with electronics, but I was pleasantly surprised.

The cube is very malleable, similar to what would be expected from a speedcube. It can corner cut about twenty or thirty degrees, and it’s put together well enough that I was not afraid of the cube falling apart.

The Heykube feels like it’s made with magnets to lock each turn into place which is technically slower than a speedcube but was something that I did not mind. Compared to a speedcube however, there was quite a bit of friction between the parts, which is what I believe slow the cube down the most. This also causes the cube to sometimes squeak as it turns, which I found to be unpleasant.

I could not find a way to loosen the Heykube to prevent this, but I do believe that it could be lubricated (there are speakers somewhere in there though, so be careful). It is also a little heavier than a speedcube (and even a little heavier than a Rubik’s brand cube), but that too was something that did not bug me during solves.

I think that the most important thing to note regarding the mechanics of the Heykube is that it was fast enough for the timing to be worth it. If the cube was too slow and rigid, it would not be worth taking the time to solve. As somebody who’s average solve usually hovers around 45 seconds, I was able to get a 42-second solve quickly, without relying on having a lucky solve.

The Heykube charges with a clip that connects to the yellow and orange centers. Although this prevents the cube from being used while it’s charging, I found that the Heykube only takes an hour or so to fully charge when plugged into the wall.

The clip that charges the cube does so via a micro-USB port, which is easy to replace if lost. The battery life itself was very nice.

After using the Heykube several days in a row, I found that the battery life had depleted to only 50% (there’s a convenient battery gauge in the Heykube app). Through my estimation, I would say that the battery would last for at least five or six hours of continuous use.

Overall, the Heykube had many more features than I first realized. When I played with just the features of the cube itself and felt that it was slower than a speedcube, I was unimpressed.

Connecting to the Heykube app and having the ability to easily time solves and track progress turned the Heykube into a cube that will not be able to sit on my shelf long enough to collect too much dust.

Knowing that it can be programmed to my needs is a feature that I am excited to try. I would recommend the Heykube to anybody who enjoys cubing. If all you want is to be able to solve a Rubik’s cube one time or, on the other end of the spectrum, are trying to set world records, then the Heykube is probably not a good investment. But for any cubing hobbyist that is looking for a cube that is fun to solve and has the potential to advance their skills, don’t pass your eyes over the Heykube.