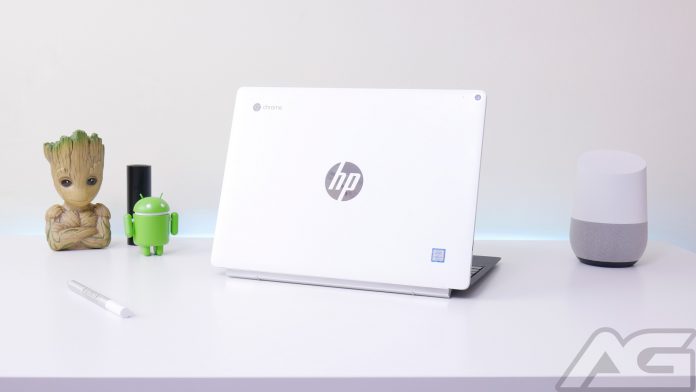 If you’re anything like me, the sad state of Android tablets over the years has left you downright depressed. Watching Apple excel with its line of iPad and iPad Pros has only made things worse for an Android fan like myself.

Then came this blessing from HP, the Chromebook X2, a detachable Chromebook that runs both Android and Linux apps. To say I was excited was a bit of an understatement. However, I’d soon learn there was only one half of this 2-in-1 that I should be excited about. 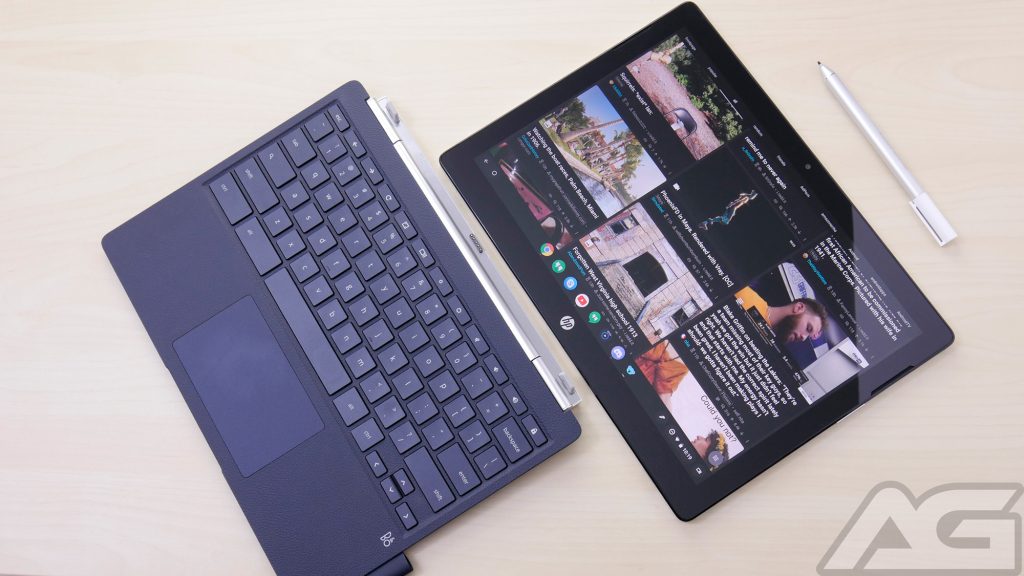 Since the Chromebook X2 uses a detachable keyboard base it can be attached with the display facing the keyboard or facing away; this provides you with several ways to use it. Whether you want to use it as a laptop, use the base as a stand, reverse position, fold it over on itself, and more, the X2 gives you plenty of options.

The Chromebook and all of the main components are housed in the half with the display. Which includes a 12.3-inch high resolution 2400 x 1600 display, Intel m3-7Y30 CPU, 4GB RAM, 32GB internal storage, a microSD card slot, headphone jack, two USB-C ports, and a 48Wh battery.

The display is so sharp it is practically crispy and gets extremely bright. My only complaints would be the color temperature was a little warm and I wish it had been in a wider aspect ratio for watching videos. Movies looked fantastic on this screen but would have been even better with smaller black bars. 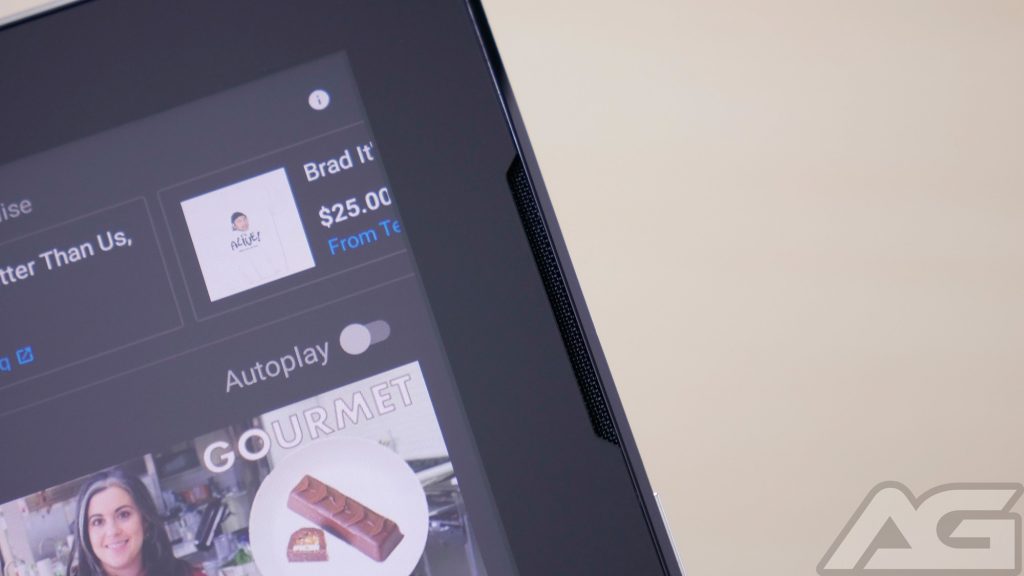 They were loud, and they were clear, but they were also tinny. There was a lack of any sort of low end while watching movies. While I know you can’t expect much from such tiny speakers, I found other tablets I tested it against offered a fuller sound.

The keyboard dock uses a metal base with a strip of rubber so it won’t slide around on your desk. While the top has a faux leather texture with a loop on the side to hold the pen. There are three things I love about this keyboard dock. The first is that it is rigid making it easy to use in your lap which is how I generally use my laptop.

The second is that the keys are springy and offer enough travel to make typing satisfying. As someone who writes for a living, this is very important and I loved typing up articles on the Chromebook X2.

The third reason I love this keyboard dock is that it comes bundled in at the $599 price. I can’t believe HP was able to do this when everyone else gouges you for what is usually a subpar keyboard dock with 2-in-1s.

The one drawback of the keyboard dock is also another one of its benefits, the weight. In order to prevent it from tipping over the keyboard needed to be nearly as heavy as the Chromebook X2 itself. That adds up to a little over 3lbs overall for both together while the X2 itself is only 1.62lbs.

The added weight is completely understandable, but just be forewarned it is going to have some extra heft compared to some other Chromebooks. It is unfortunate HP didn’t find a way to better utilize adding weight by adding more battery capacity in the dock. However, that surely would have increased the price and the Chromebook X2 doesn’t suffer from short battery life.

The included pen uses one AAAA battery and is stored conveniently in the fabric loop on the keyboard dock. It wrote with minimal lag and worked perfectly for me when taking notes, painting, or drawing.

The Chromebook experience is where the X2 excels, and it should. It is a Chromebook first and foremost. I was able to open dozens of tabs, wrote several articles, checked my email, browsed social media, and streamed videos.

It handles all the basic computing tasks with ease. I only found myself frustrated when I ventured outside of the Chrome browser and Chrome apps. While Chrome OS is now capable of running Android and Linux apps, it is not without hiccups.

The biggest issues I ran into were with Android and Linux apps freezing, broken features, or just plain refusing to work. Linux apps were more stable than Android apps in my experience but there were still some complications.

For example, Linux apps cannot access files unless they are moved to the Linux partition, which can be problematic when you only have 32GB of storage. Audio is also not supported in Linux apps at the time of writing but is in the works.

Basically, if you want the smoothest Chromebook experience it is best to stick to Chrome and Chrome apps. Otherwise, it can be a bit of a mixed bag of what you’ll get.

If you were hoping the Chromebook X2 would be able to double as an Android tablet since it can run Android apps, you would be mistaken. As I’ve mentioned previously, Android app support is hit or miss.

From my experience there were apps that just plain refused to work while some occasionally locked up, and others worked fine. For example, my favorite Reddit app refused to work forcing me to switch to a different one.

Another example would be watching videos through apps. The Google Play Movies app would only show a black screen when trying to load a movie for the first two days I had the Chromebook X2. Yet, trying to play the same movie via the YouTube app worked fine. Somewhere around the third day, Google Play Movies decided to magically start working.

I also had issues with the Xfinity Stream app where after working perfectly for days until an update came for the Chromebook which caused videos to freeze. Luckily most streaming apps also feature a website portal, but it’s not exactly as touchscreen friendly as an app.

For the most part, games seemed to be the apps that worked the most consistently. Although that doesn’t mean they were perfect. For example, in Mortal Kombat X the taskbar refused to disappear and it shifted the touch area for buttons on the screen lower than the graphic on the screen. I would have to press underneath the actual button on the screen in order to get it to register.

However, some games such as Asphalt 8 worked perfectly with all of the gyros, sensors, and buttons responding just as they would on any other tablet.

During my daily usage, I had no real complaints using the Chromebook X2. It handled everything I threw at it performance wise. I regularly have a dozen or so tabs open at once and besides having to disable the purging of background tabs it kept up without issue. The games I played outside of some bugs also handled and performed just fine.

I was slightly worried about how it would handle editing photos but that went as smooth as expected. There are surely faster Chromebooks out on the market but the X2 has hit a sweet spot with performance, price, and battery life.

Cameras on most tablets are utilitarian at best and the Chromebook X2 is no exception. The 13MP f/2 camera on the back is capable of decent photos but is wildly unpredictable. Sometimes the exposure is way off, other times the white balance is incorrect, and on some occasions the photo looks rather pleasing.

There is also at least a one-to-two second wait from when you press the shutter button until it actually takes the photo. Overall, this is not a camera I would rely on but in a pinch, it’ll do.

The front-facing 5MP f/2 camera is not any better but will work fine for video calls and offers a nice wide viewing angle. 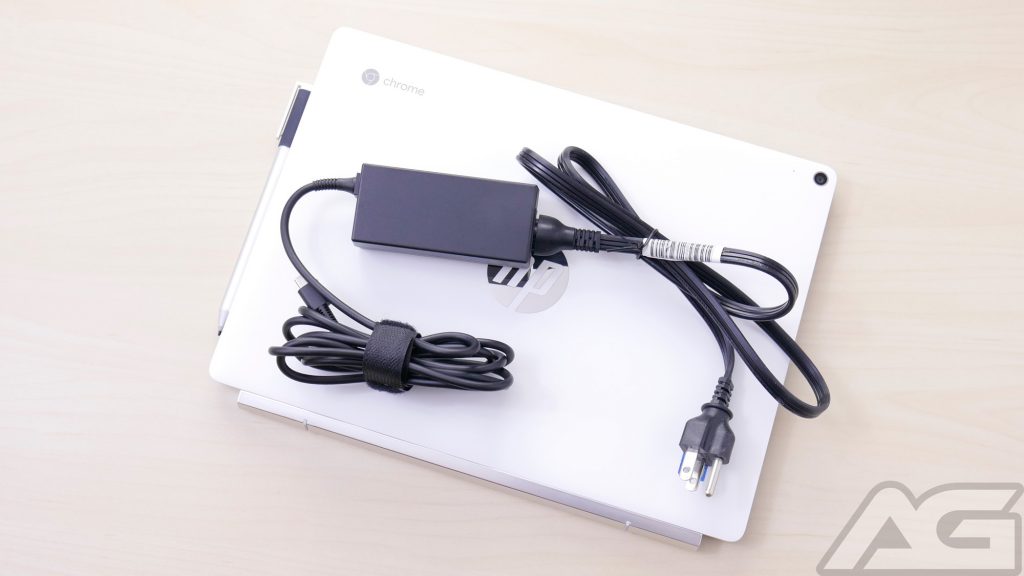 Battery life on a mobile device is always of great importance and the Chromebook X2 is rated for 10-12 hours of usage. That should be enough to get almost everyone through one full day of work or school. In my experience, the X2 lives up to this and then some.

I never once had to worry that I wouldn’t make it through a full day. Even during days where I had a heavy workload, I never had any battery anxiety. The X2 just kept chugging along until I was able to get back to the charger.

Something that made me even happier is the charging brick is quite compact and light. Plus, it has a long stretch of cable meaning I didn’t have to be right on top of an outlet when I wanted to use it while it’s charging up.

The HP Chromebook X2 offers up just about everything you could want in a Chromebook. It has a high-resolution screen, good performance, front-facing speakers, great battery life, a responsive keyboard and touchpad, and an included pen. However, I had higher aspirations hoping for a great Chromebook and an Android tablet all in one.

My dreams were dashed for a great Android tablet due to the support for apps; however, I still came away loving the X2 for the Chromebook experience it provides. And the price.

To find a Chromebook with keyboard and pen, and of this quality, included for $599 or under is very rare. What’s more, you can regularly find it on sale for even cheaper making this the best bargain for a detachable Chromebook.

As long as you are content staying within the confines of Chrome while docked or undocked, you’ll be glad you picked up the Chromebook X2. Just know, once you venture out of that bubble things can get buggy.