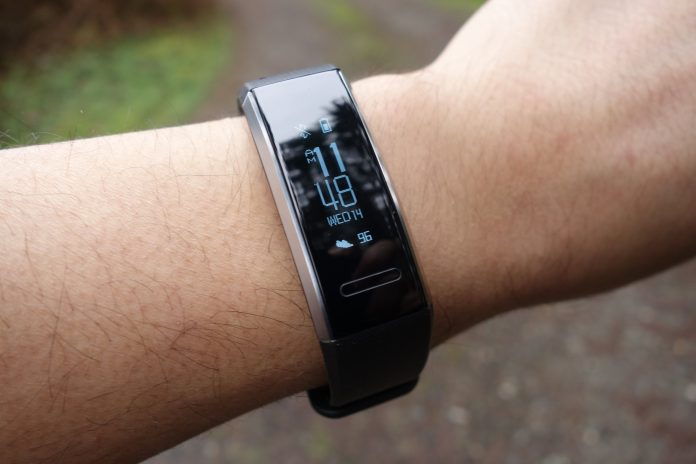 Wearables are in a weird spot these days. Smartwatches haven’t really been a hit with the masses, resulting in manufacturers slowing down development of new ones. But fitness trackers on the other hand have been steadily moving forward. It makes sense when you think about it. Fitness trackers give the user functionality that they wouldn’t otherwise have, where smartwatches are an extension of the smartphone’s functions.

Now that we’re past our thought of the day, we can introduce an interesting new activity tracker – from a company who’s not really known for fitness devices, Huawei. 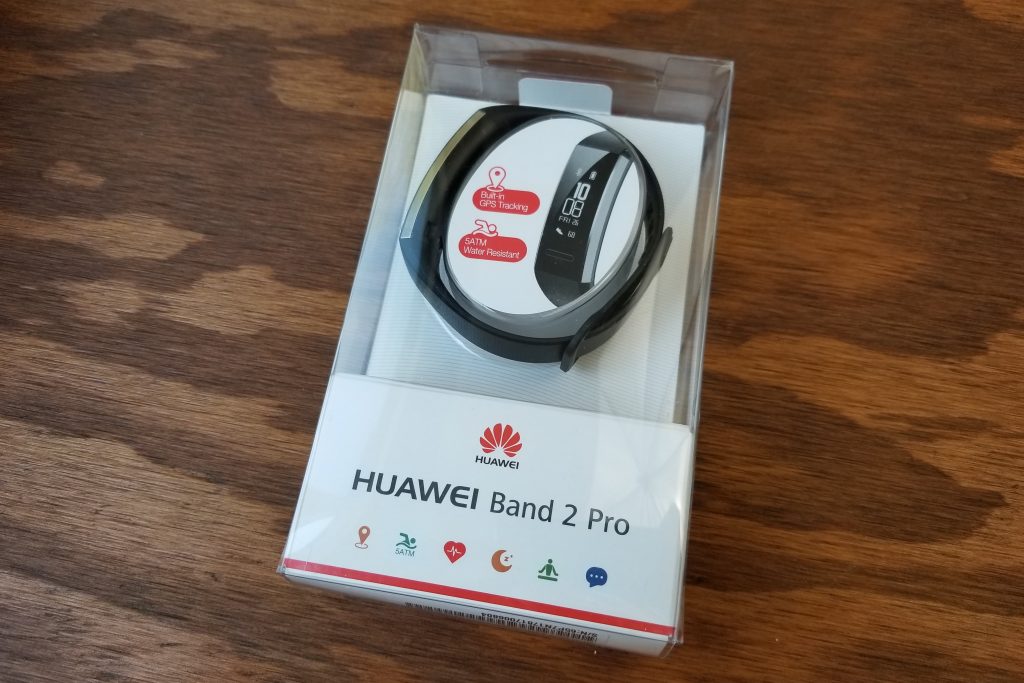 The Band 2 Pro is actually its second gen wristband tracker, so it’s more refined and more competitive with established devices. Huawei has our attention with its quality smartphones, now lets see if it deliver the same excellence in a fitness tracker.

Most of us have an image of what a Huawei wearable looks like. The Huawei Watch has been one of the best Android Wear smartwatch offerings for the past few years. But fitness wristbands have a different priority, and with the Band 2 Pro, Huawei completely devotes it to that cause rather than one that balances fitness and smartwatch functions.

So unlike the comparable Samsung Gear Fit2 Pro, which sports a sizable OLED screen and touch controls, the Band 2 Pro keeps things simple with a slim, monochrome display and single-button control. It’s clear that you won’t be doing smartwatch-like actions here, like responding to texts or emails on this device. The Band 2 Pro is strictly designed to be a fitness tracker, and to do those particular functions as well as possible.

And this is easily seen when you put the wristband on. It’s slim, lightweight, and curves perfectly around the wrist. Being a smartwatch user, I particularly appreciated the relative thinness of the electronics compartment. This is a wristband that you should come to forget you’re wearing. 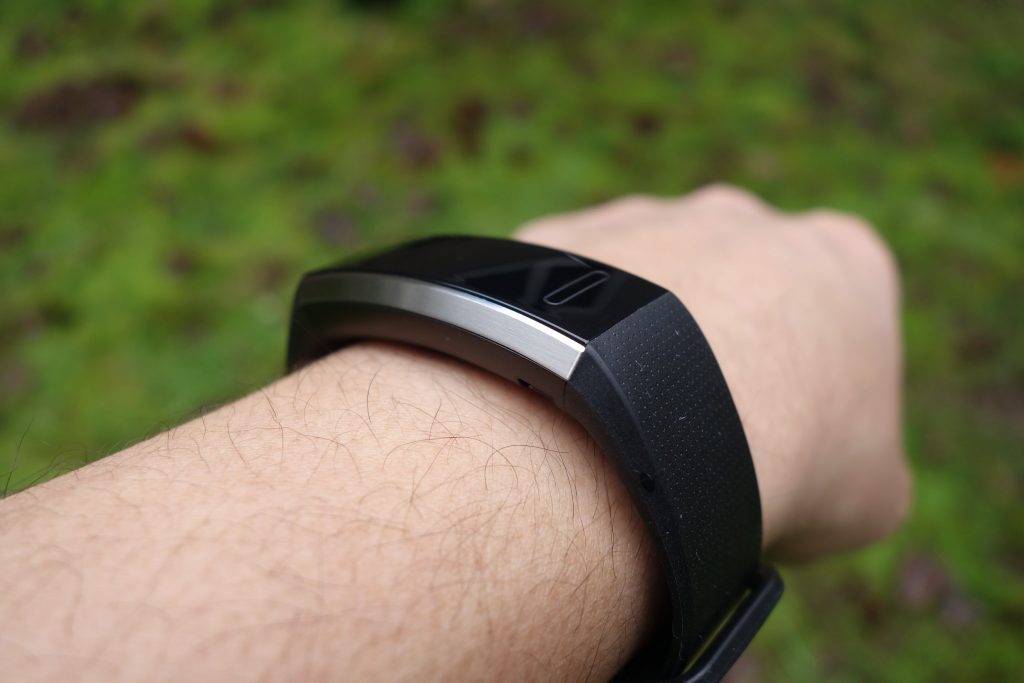 Not having a everything-but-the-kitchen-sink kind of focus also means cost is kept down. You can find the Band 2 Pro south of $70 in the right places. But Huawei handles the construction well in spite of that. The electronics casing is a mix of hard plastic, metallic side rails, and glass on top – all sealed tightly to meet the device’s robust 5 ATM water/dust-proof rating.

The band portion is practical and comfortable rubber. The locking mechanism is the simple prong-through-slot sort. That isn’t the most secure method, but Huawei thoughtfully made it a two-prong clasp, for redundancy. We can attest that even after rigorous use, we never felt like the band would come undone.

If you haven’t used this kind of activity tracker before, the primary purpose of it is to record fitness data of your workouts and feed you that information in a meaningful way. On the Band 2 Pro, you simply select a specific workout type from a set of options, began your workout, and then end the program when you’re done. The wristband stores the data, and when communication with a mobile device is present, it will send the data over for analysis.

So this means that you need to pair the wristband with a smartphone or such in order to really use it. You also need to install Huawei’s accompanying apps, as they’re the system’s console.

There isn’t a touchscreen on the Band 2 Pro, and control is only through a single, capactive button on the bottom of the display. This would be painful if the device had smartwatch-like functionality, but it doesn’t. All you’re going to do on this wristband is scroll through options and start/stop programs. Sure, scrolling through a menu is better accomplished by swiping up and down, but it’s not the end of the world here. Though, we will say that it’s annoying that we can only scroll in one direction with the single button. If you overshoot an option, you have to cycle through the whole list to get back to it.

Huawei used P-OLED tech to power the screen. So since the display utilizes a black background and only the text draws power, you can expect the thing to go the distance in regard to battery life. It should achieve three weeks under “normal” usage from a full charge. The only downside here is that the P-OLED visibility is a little weak outdoors, and a struggle to see in direct sunlight (and there’s no way to adjust the brightness). We would’ve liked Huawei to implement an adaptive brightness setting, being that this is a device you’ll likely be using outside quite a bit.

What you see on the wristband is pretty simple. The Home screen is a layout of basic information, like the battery level, Bluetooth connection status, date, and time. You also see your pedometer count for the day (it resets daily). We didn’t see a way to change the layout or the pedometer info for a different stat.

A concern we had was a limited set of exercises to choose from. You’re given four: Outdoor Run, Outdoor Cycle, Swim, and Indoor Run. We would’ve liked Huawei to account for a few other popular aerobic exercises (i.e. elliptical, cross-fit, punching bag, etc.). However, nothing’s stopping you from using “Indoor Run” for say an elliptical workout. You’ll still get some relevant stats, like heart rate and steps. But then you’ll also get some wasted data, like pace and average speed, that could’ve been something useful if the program was actually tuned for that exercise. You also wouldn’t get an accurate calories burnt count.

In addition to the heart rate sensor, another praiseworthy feature in the Band 2 Pro considering its price is a standalone GPS. This means it has its own GPS unit built-in and doesn’t need to piggy back off the phone. This also means that if you’re doing an outdoor workout, you don’t necessarily need to have your phone on you to capture movement and distance data. Having a GPS also allows for more accurate speed recording.

The other options on the wristband are a module to check other pedometer-related stats of the day (distance covered, calories burnt, amount of inactive time, etc.), conduct a BPM measurement, and one that runs you through a focused breathing session.

There are two apps that go along with the use of the Band 2 Pro: the Huawei Wear and Huawei Health apps. The latter is the one you’ll be using regularly to access your fitness stats. Huawei’s Wear app is just for managing the wearable device itself, similar to Android Wear, where you’re given a few settings/controls.

For instance, the wristband can function as an alarm – you can set that here. There are also toggles for Do Not Disturb, a couple gestures (tilt to wake or rotate wrist to scroll), and left or right hand wearing preferences. But there are three important settings here that you’ll probably want to enable, as they are fantastic:

So being that Huawei isn’t really known for fitness-related devices, I expected the health software to be pretty basic. But it was a pleasant surprise that it’s quite the contrary. You get an impressive amount of information for each event.

The layout is intuitive, starting with the daily pedometer readings at the very top and scroll-able sections (or cards) for the measurements in question. Tapping on a card takes you to into overview stats of that subject, which then you can dig into for more detailed information.

What impressed us was the extra and useful information that you come across along the way, like how much of your BPM’s correspond to certain activity categories (even just within a workout too), training ranking (so you can have a comparison as you progress), VO2Max metric (assessment of how fit you are by measuring oxygen consumption during exercise), recovery time indicator (predicts when your body is fully recovered for the next workout, so you don’t over do it), and the ability to set up a personal running training plan (where the device analyzes your level and coaches you through the progression).

The sleep analysis is also really impressive. You’ll be given a sleep quality ranking and how much sleep you got on a daily basis, but also a really detailed breakdown of the sleep session, like how much of it was light sleep, deep sleep, REM sleep. You’ll also be given ranking for qualities like deep sleep continuity, breathing, and regularity of time up. Recognizing that users may not know what to make of the information, Huawei generously partnered with Harvard Medical School’s The Center for Dynamical Biomarkers to provide robust information of what the stats all mean and if they’re good or bad. 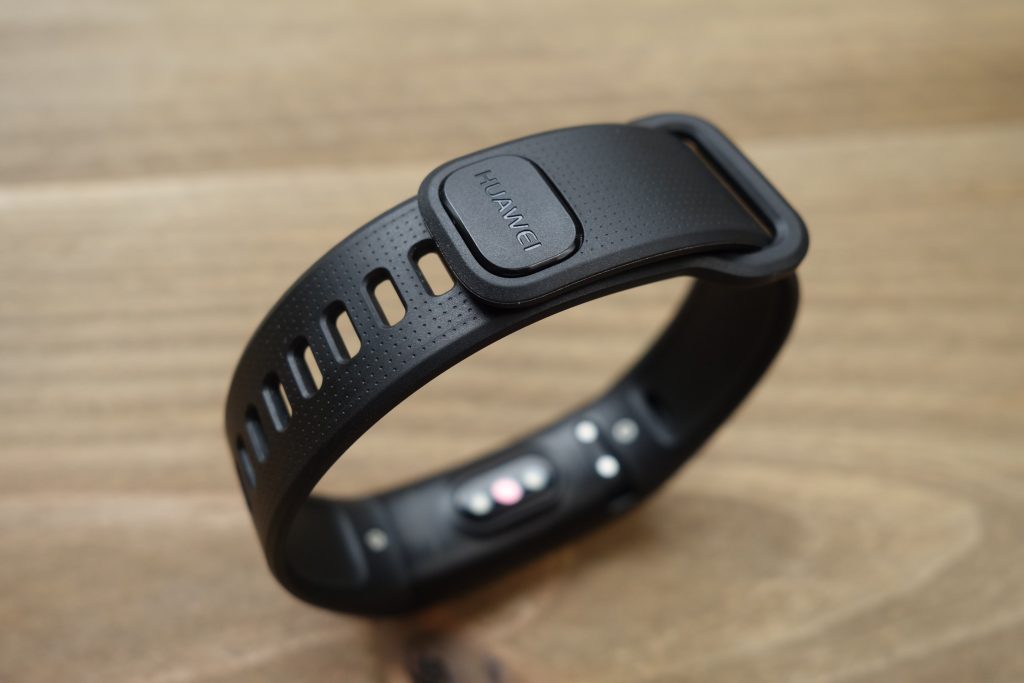 The Huawei Band 2 Pro is a good buy and definitely a recommendation by us. You’re getting a lot for your money on the things that count in an activity tracker wristband. It’s durably put together, slim and comfortable, and its capture and conveyance of fitness data is spot on. Huawei went above and beyond in several ways (i.e. built-in GPS and considerate analysis information) when considering the price tag of the Band 2 Pro. Sure, touchscreen controls would’ve been nice, but it’s an appropriate compromise all things considered.