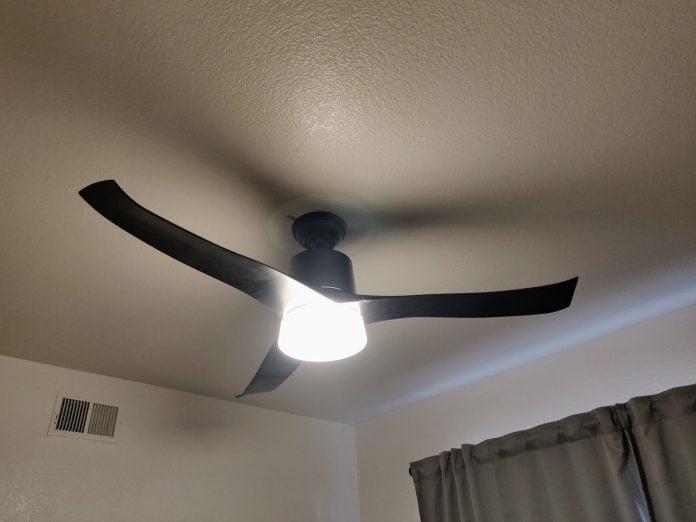 With smart home technology booming – Apple, Amazon and Google all have their own respective platforms, among others – more and more appliances and gadgets are looking to get in on the game. Doorbells, deadbolts, light bulbs, even microwaves. And now, with the Hunter Symphony, smart ceiling fans. Retailing for $299.00 from Amazon, Home Depot and others, it’s not an inexpensive device, but it’s also pretty affordable compared to some of the more outlandish boutique fans on the market.

I’ve been using the Hunter Symphony in my game room in the tail end of one of California’s signature sweltering summers – here are my generally unfiltered thoughts on the connected ceiling fan.

I don’t have a whole lot to compare it to, but the assembly and installation of the Hunter Symphony went smoothly. All pieces were both lightweight and sturdy, and fit into place precisely. The fan chassis doesn’t wobble on its downrod even at maximum speed, and the fan blades tightened in place with ease. 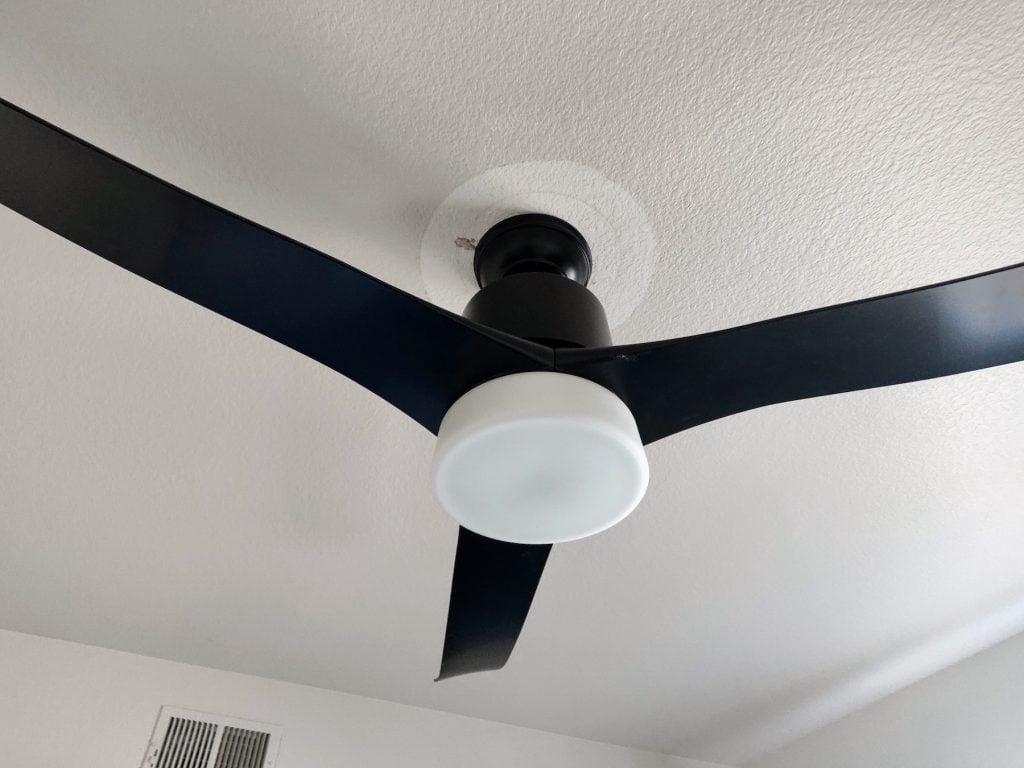 The Hunter Symphony features a triple-blade, 54″ design and a dual, dimmable LED light setup. It comes in three different finishes: Matte Black, Fresh White, and Matte Nickel. My Symphony is matte black, and it strikes a distinctive figure hanging from my ceiling. In retrospect, I probably would have gone with the Matte Nickel to complement the other hardware in my home.

Like most modern ceiling fans, the Symphony has a reverse flow option. This pulls the air up and pushes it across the ceiling, resulting in air circulation that’s indirect rather than pushing down on you. 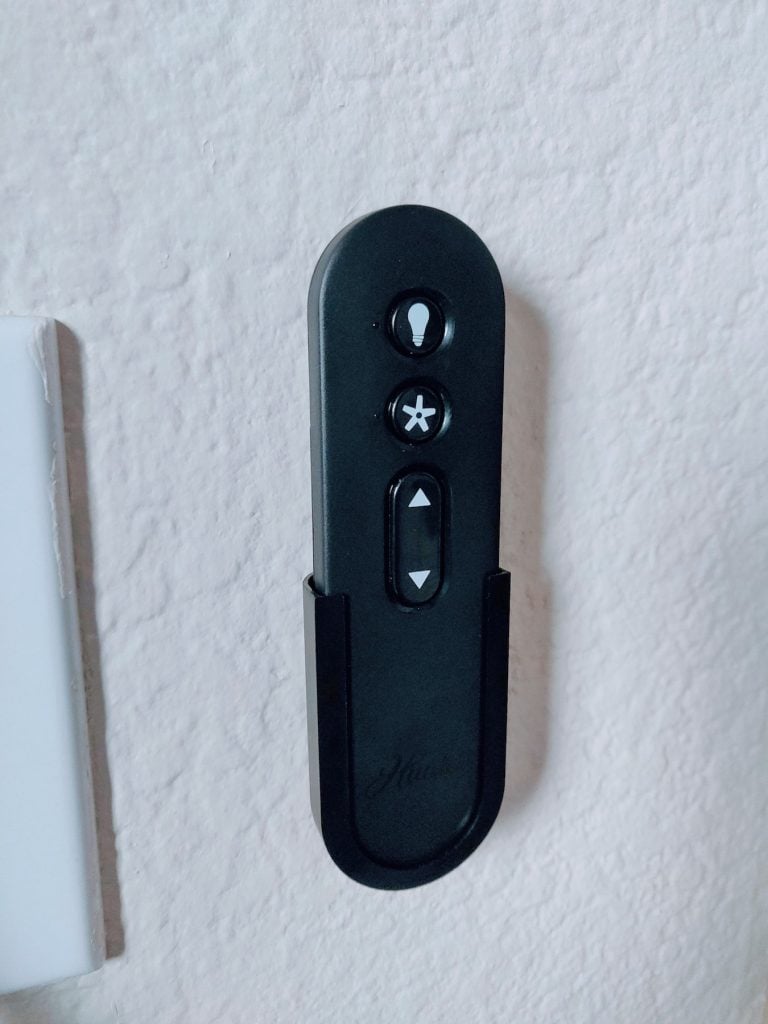 What’s interesting about this particular fan, though is that you can change the flow of the air with a single button press. Many fans require you to manually flip a switch on the fan’s chassis, but the Symphony can be manipulated with the included remote – it’s all very convenient. The remote offers the usual controls – Light On/Off, Fan On/Off, and Fan Speed Up/Down.

According to my installer, the installation of the Hunter Symphony was straightforward for anyone with experience doing it, The instructions and diagrams included all made sense even to me, which is a promising sign for do-it-yourself types.

The Hunter Symphony features a WiFi technology called SIMPLEconnect, complete with its own companion app in the Google Play Store.

SIMPLEconnect allows the Hunter Symphony to link up with most of the Smart Home platforms on the market, including Amazon Alexa, Apple HomeKit, and Google Assistant.

While the Hunter Symphony is a wireless-enabled device and has its own companion app, its compatibility with modern AI assistants is a little improvised. Rather than using the typical Google Assistant interface, for example, in which you would add the Hunter SimpleConnect service from a list within the Google Home app, Hunter opted to make its voice commands a little less intuitive. Instead of saying something like “Hey Google, turn on the Living Room Fan,” we have to say “Hey Google talk to SimpleConnect” and then say “Brighten Fan Light” or “Turn On Fan,” etc.

I’d like to see a more integrated and intuitive interface, and fortunately, these problems can be fixed with a simple software update. Whether or not Hunter decides to make that fix is yet to be seen, but as it stands the AI integration and smart home capabilities leave something to be desired.

In my experience with ceiling fans – which is, admittedly limited to the fans in the three whole houses I’ve lived in – none have provided the smooth, consistent flow of the Hunter Symphony.

The Symphony features the SureSpeed guarantee, which – in Hunter’s words – “delivers optimized airflow for ultimate high-speed cooling” and features a 20% increase in airflow velocity compared to its competitors. I’ll let you decide if that’s buzzword marketing or not, but in my experience, the Symphony makes my game room – which is routinely much hotter than the rest of the house – much more bearable without Air Conditioning, even in the sweaty California summer sun. 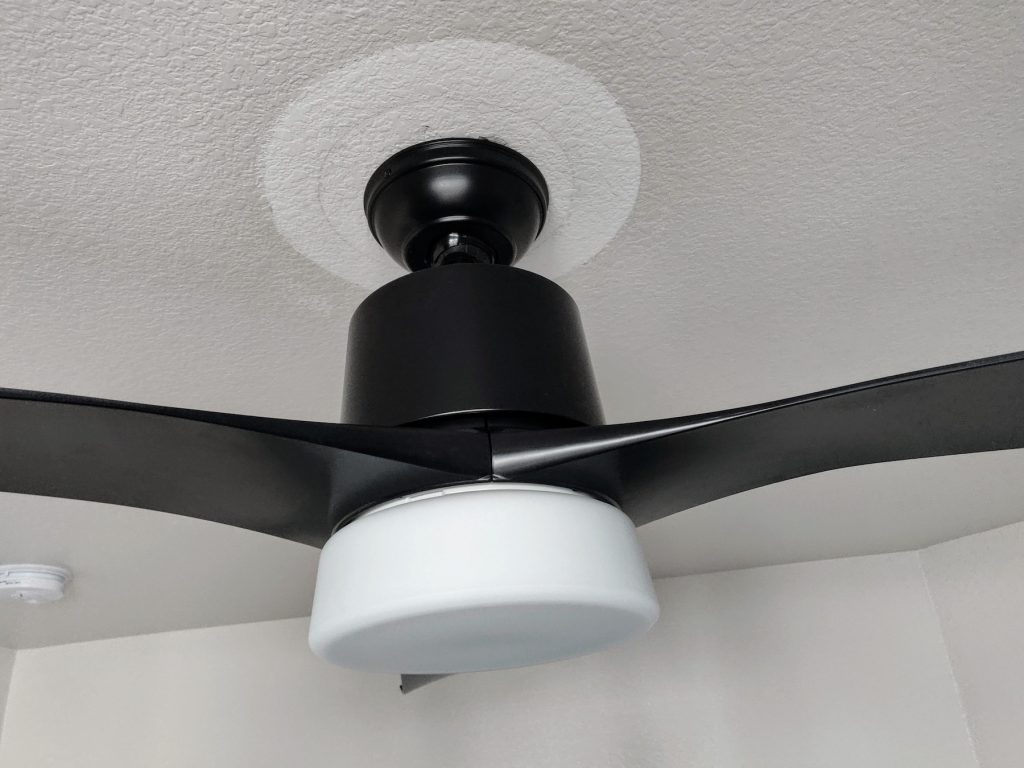 Even better, that great airflow doesn’t come at the expense of sound. With Hunter’s trademark WhisperWind technology, the only sound I generally hear from the fan is the air movement itself – no low thrumming, no wobbling on the downrod, no jingly pull-chain. Just quiet, cool air.

A quality ceiling fan will generally run you between $100 and $300. The Hunter Symphony is on the high end of that spectrum, at $299.00. Its feature list and performance back that pricing, with great airflow and quiet operation as well as the smart – if a bit janky – connectivity features. There aren’t many smart ceiling fans on the market – Hunter’s solutions and the $500+ Haiku fans are about it – and as such these smart features come at something of a premium. All things considered, the Symphony is an excellent ceiling fan that may be a touch expensive for the average consumer, but also may be a great addition to a Smart Home.

Get the Hunter Symphony from any number of online retailers, including: