Awhile back, I reviewed iClever’s 6-port USB desktop charger. While my review was generally positive, the device was not without its faults. This time, I had the opportunity to review iClever’s BoostCube. Was it any better? Read on.

The iClever BoostCube features four USB charging ports with each port outputting a maximum of 5 volts and 2.5 amps. Like all iClever charging devices, the BoostCube features SmartID, which recognizes the electronic device plugged in and maximizes the charging efficiency for a faster charge. Since each port is monitored individually, you won’t have to worry about one device getting power too quickly while another device gets power too slowly.

There are also several safety mechanisms inside the BoostCube to protect against over-current, short-circuit, and over-temperature situations.

The BoostCube doesn’t have a traditional power cord either. Instead, the BoostCube features a foldable plug. 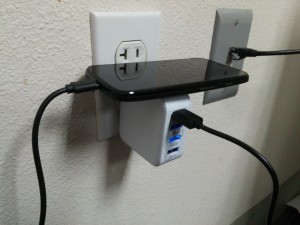 Even though your BoostCube will be stuck on the wall, the portability factor more than makes up for the minor inconvenience of having to be tethered to the wall.

One of the features that I like is that by plugging it directly into the wall, you actually get a sort of platform to lay your device on. This comes in handy when your outlet is not close enough to your desk.

Overall this is a great device that will handle most, if not all, of your charging needs. I was very impressed with the build quality of the BoostCube and just how portable it is.

If you need to charge more than four devices at a time, then I suggest buying two. It’s on sale for $19.99 on Amazon.com and for that price, two BoostCubes might just be a good idea.