The great people over at Inateck have sent us another awesome product, the BP2001 Bluetooth speaker. While finding a Bluetooth speaker nowadays is by no means a hard task, finding one at an affordable price while still retaining quality is where you begin to have a difficult time. The BP2001 delivers on both fronts and demonstrates that you do not need to spend a small fortune to still get a decent product. 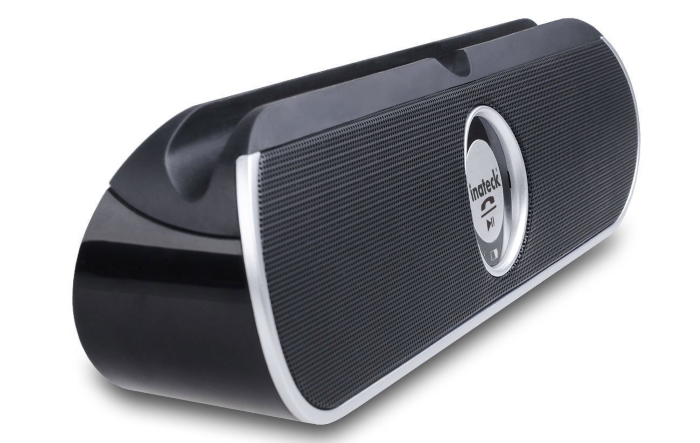 The BP2001 can be best described as a pill shaped Bluetooth speaker. Starting with the front you get a lovely silver ring in the center that showcases the only button on the BP2001. The button acts as the play, pause and pairing button. On the sides you are greeted with a great silver ring that goes from side to side, minus on top. This really gives the BP2001 a great look, as the silver is a great contrast to the black color scheme of the rest of the speaker. One of the things I really liked about the design of the BP2001 is the cradle that is built on top of the device. This allows you to be able to place your smartphone or tablet right on top and be able to create a fun music area anywhere you go. The cradle is built in such a way that it does not take away from the device but if anything augments the modern look.

On the back you get another neat feature, an adjustable stand. The BP2001 is capable of standing upright on its own but the stand is there for when you place larger devices on the cradle to add that second layer of support. Right beneath the adjustable stand you have the power switch, an audio jack and the charger port. Nice and clean, as to not take away from the design of the BP2001.

Overall, the design of the BP2001 is modern, sleek and to be honest, luxurious. Just by looking at the device you would forget that it costs way less than other comparable 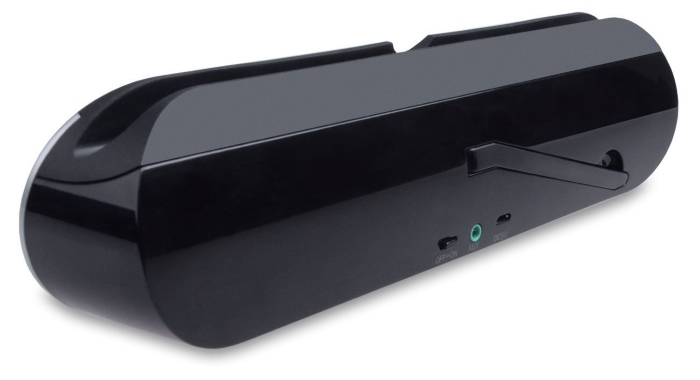 The BP2001 is for all intents and purposes a speaker. A portable Bluetooth speaker. It does not profess to be anything else and it does what is was built to do. To get started, you turn on the device using the power switch on the back which then allows you to start paring your devices. From there its as simple pressing the silver button on front. The silver button also acts as a play and pause button and will switch functions once a device has been paired. Otherwise pressing the button activated the paring feature on the BP2001 to make it available for paring for your Bluetooth capable device.

Once you get is ready to go, playing music is as simple as pressing play on your preferred music app. The sound was nice and clear and I had no issue enjoying my favorite artists while jamming out in the shower. With that said though, do not expect to hear audiophile quality sound as that is not what the BP2001 was intended for. The BP2001 was intended to provide you a nice easy way to listen to your songs on the go while not having to sacrifice too much music quality but there will be some small degradation, compared to using your headphones or earbuds.

The BP2001 is a fantastic little speaker with great looks and good sound. While it will not blow away anyone with its music quality, you will be able to enjoy listening to that new Katy Perry album while trying to dance like Left Shark next time you are home alone. You can purchase the BP2001 speaker by heading over to Amazon or by going directly to Inateck’s webpage, where you can also browse their other tech goodies. Also, if you head over today you can save an extra five dollars by using promo code: W5TEVQMD during checkout. Now there really is no reason to purchase one!

For review today we have the latest in the popular Kindle Fire series of tablet, the HD 10 Plus. How does the low-priced unit fare?