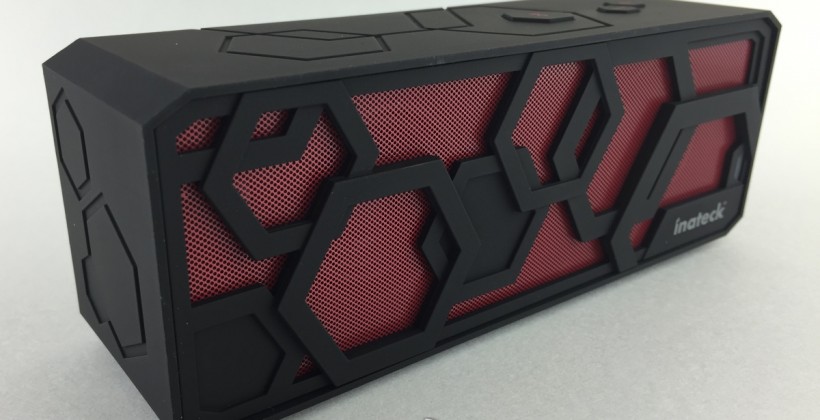 Not long ago I was able to review a fantastic Bluetooth speaker from Inateck called the BTSP-10.  I found that the BTSP-10 was a great little speaker, especially for the price.  Well, Inateck recently got in touch with me and asked if I would like to try an updated version of the BTSP-10.  It took me about two seconds to decide that I wanted to get my hands on the new BTSP-10 Plus.  Inateck makes great gear, but is this updated speaker worth picking up?  Read on to find out.

When I reviewed the first BTSP-10 I was surprised by the size of the speaker.  I don’t know why, but I was expecting a bigger speaker.  While I wasn’t surprised on the second go around, it’s worth noting that this is a very compact speaker.  You will have no problem finding space to carry this speaker on your adventures.  Like the original BTSP-10, the Plus version is also a very sturdy piece of kit.  I have abused the original speaker in numerous different ways and never had a problem.  It feels like the Plus version should carry on this tradition.  The updated speaker is covered in a soft touch rubber, that makes it very grippy and easy to hold onto.  The new version has a red grill instead of the blue of the original.  For the most part it’s an attractive little speaker, but I have to admit that I’m not a huge fan of the octagons that cover the speaker.  I don’t know why Inateck decided they wanted to use a stop sign has the major design influence, but I feel like the speaker would look better if the surface was smooth and the red grill was uncovered.

The BTSP-10 Plus offers two major improvements over the original version, a second speaker and a bigger battery.  These both prove to be welcome additions prove.  The original speaker sounded good, but if you cranked up the volume the sound quality suffered.  This wasn’t a huge issue if you were listening in a confined space, but if you ventured outdoors performance suffered.  The Plus version definitely improves in this area, you can get much better sound quality at higher volumes.  As far as the overall sound quality, the BTSP-10 Plus doesn’t disappoint.  The high and mid range are very clear and precise, but the bass performance isn’t the greatest.  While the Plus version improves on the original, this little speaker just doesn’t provide a lot of bass.  Overall, I found that the sound coming out of this little thing is impressive, but if you prefer bone rattling bass you might want to look elsewhere.  Inateck also improved on the original speakers batteries life.  The Plus version should give you almost 15 hours of music playback.  I have to admit that I didn’t get near the claimed 15 hours, but I left the speaker playing through the night a couple times and it was still going strong come morning.

Of course the most important aspect of a Bluetooth speaker is the ability to play music, but there are a couple extra features to be found in the BTSP-10 Plus.  Bluetooth 4.0 makes it painless to pair your smartphone with the speaker and a microphone makes this a convenient speakerphone.  I only made a couple calls but the speaker performed decently.  You can hear callers clearly, but you need to stay pretty close to the speaker so the person on the other end of the line can hear you.  I wouldn’t want to use this speaker for an important conference call, but in a pinch it should work for a hands free call.

I have to admit that the original BTSP-10 was a pretty great Bluetooth speaker, especially for the price.  There wasn’t exactly a lot of room for improvement over the original, but Inateck deftly identified the originals shortcomings and made improvements.  Sound quality is much better overall, especially at higher volumes and the battery should provide enough life to outlast just about any party.  I would argue that the only thing Inateck didn’t improve was the looks of the speaker, but honestly that isn’t such a big deal.  When you consider that the BTSP-10 Plus is available for $49.99 its easy to look past a few octagons.  You can find the Inateck BTSP-10 Plus on Amazon or Inateck’s website.

On a side note, the nice people at Inateck gave me this promo code for their BK1003E stainless steel Bluetooth keyboard: UCDKD237.  Enter that code and you will save $5.