Ever since the first cell phones hit market companies have been making vehicle mounting systems. More recently those mounting systems have become less expensive and less permanent. Infernal Innovations has many innovative products, but in this review, I will be focusing on its CD player magnetic phone mount.

The setup is fairly easy. First attach the metal plate to your phone. If you have a phone with NFC and/or wireless charging, you’ll want to make sure that the plate is affixed below the coils or the plate will interfere with NFC and wireless charging operation. The plate can be attached either directly to the back of the phone, inside your phone’s case, on the outside of the case, or if your phone has a removable back, you may be able to mount the plate inside the back cover. To affix the metal plate, simply remove the adhesive cover and stick it where you want it.

In my case, I use a Zerolemon removable battery that adds a lot of weight to the phone. In order to have a good grip on the phone, I needed to mount to the plate to the outside of my phone case. This worked out very well.

One of my concerns going into the review was whether the mount would hold my heavy phone with the plate mounted at the bottom. After setting everything up, not only did it hold up my phone, but the magnets were sufficiently powerful to hold it in a landscape position as well as portrait. In a portrait position, the phone did not move at all, even when hitting bumps. In a landscape position, the phone would drop ever so slightly after my car would hit a bump, but it took several bumps before I had to adjust the phone back up.

In a portrait position, I never had to readjust the phone. It stayed upright the whole time.

Needless to say, I was rather impressed with how strong the magnets on the mount were. Not only did they hold my phone in position, but they did it with a huge extended battery adding a ton of weight and they did it with the plate mounted at the bottom of the phone instead of the middle, which is where they recommend the plate be mounted. This means that you don’t have to sacrifice your NFC and/or wireless charging to have the convenience of a magnetic mount.

The convenience is really the selling point of a magnetic mount. All you have to do is place your phone on the mount when you get in your vehicle and remove it when you get out. It’s that simple. No fiddling with adjusting the mount or anything. Just place and go.

Overall this is a great solution for mounting your phone in  your car. You don’t have to fiddle with suction cups or worry about one of your AC vent being blocked and the phone takes a whole three seconds to attach to the mount.

There are only two downsides to using this type of mount. The first I already mentioned. It takes up your CD players slot. The other downside is that not all vehicles have a conveniently placed CD player. If your CD player is mounted too low, it will cause you to take your eyes off the road.

Luckily Infernal Innovations also has vent and suction cup magnetic mounting systems. What do you think? Let us know in the comments below. 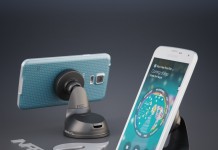