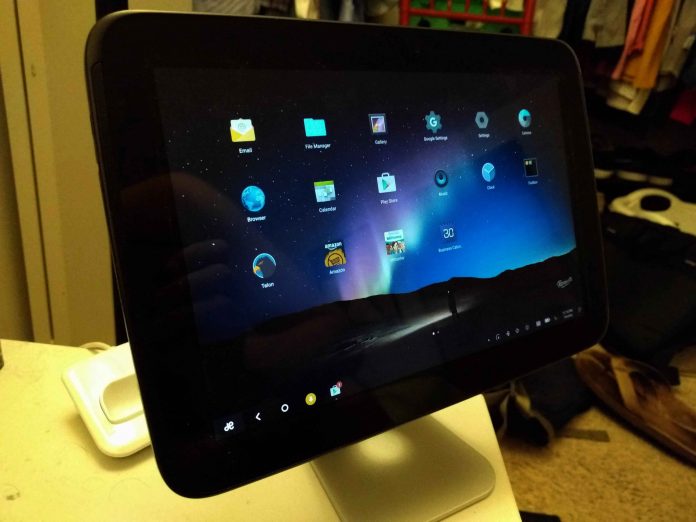 If you’ve ever been the type of person to attempt to replace your laptop with a tablet, you’ve probably realized that trying to do that with an Android tablet was nearly a lost cause, at least until recently. After more than 5 years of Android tablets, productivity is finally becoming more viable with mature photo and video editing products and word processing software such as Microsoft Office.

You probably also realized that most stand cases are pretty mediocre, but you’re not sure what you’d replace it with. If you haven’t already given up and bought a Microsoft Surface, the iQunix Zand tablet stand might be exactly what you’ve been looking for…to some extent.

The height of the stand is perfect for using your tablet as a laptop. Combine that with a Bluetooth keyboard, mouse, and Remix OS 2.0, and you’re really cooking!

It has an incredibly minimalist design and looks absolutely stellar with the tablet “attached.” I put attached into quotes because the stand just has a really tacky pad on the top and bottom that grip to your tablet and the table. At first I was worried about things falling off but I’ve had my Nexus 10 sitting on the stand for about a week and it hasn’t budged, even with regular use.

It seems like iQunix thought of everything, including having a nice opening on the back of the stand to thread a charging cable through so that you can have a sort of permanent set up. And I think that’s the problem, at least for me, because that seems to be what it’s for.

Where it falls short

It’s clearly designed to be for something that you never move. None of it is permanent, there’s nothing to worry about, there, but you aren’t going to be moving it about very often. It has a very tacky bottom – to the point that I have to hold down my side-table that I have it stuck to if I want to remove it, which means that this isn’t something that you can just take with you to your meetings like you would a laptop.

What’s more, the shape of it (albeit very aesthetically pleasing) is the furthest thing from portable. Once you take the wax paper off when you take it out of the box, it’s sticky forever (or at least as long as you don’t get it dirty) and it’s shaped like a giant metal “Z,” which doesn’t exactly fit into your backpack without complication.

It’s clearly not meant for a retail setting as a permanent mount because it is too easy to take the tablet off of the stand or just take the whole stand and go.

At the end of the day, the iQunix Zand tablet stand is really fun to say, it’s really good at standing up a tablet, and it looks great doing it, but I can’t work out who is going to buy one. It’s not for the tablet junkie who wants to replace their laptop and it’s not for someone who wants to drill their tablet to the table and make it into a point of sale. It might be for someone who wants to have a permanent tablet stand with a keyboard and mouse instead of a desktop or proper laptop at home but I’m not really sure that that person exists.

Ultimately, I really like it and wish that I had a purpose for it, but I don’t know what that purpose is. Admittedly, $40 is a lot – I would have probably guessed that it cost $25-30 and probably only half of that to manufacturer, but it really does have an Apple-like elegance to it that you don’t see every day. If you know what you’d use it for, please tell me about it in the comments because even at $40 I kind of want one, but I can’t possibly justify it without a real reason for it.