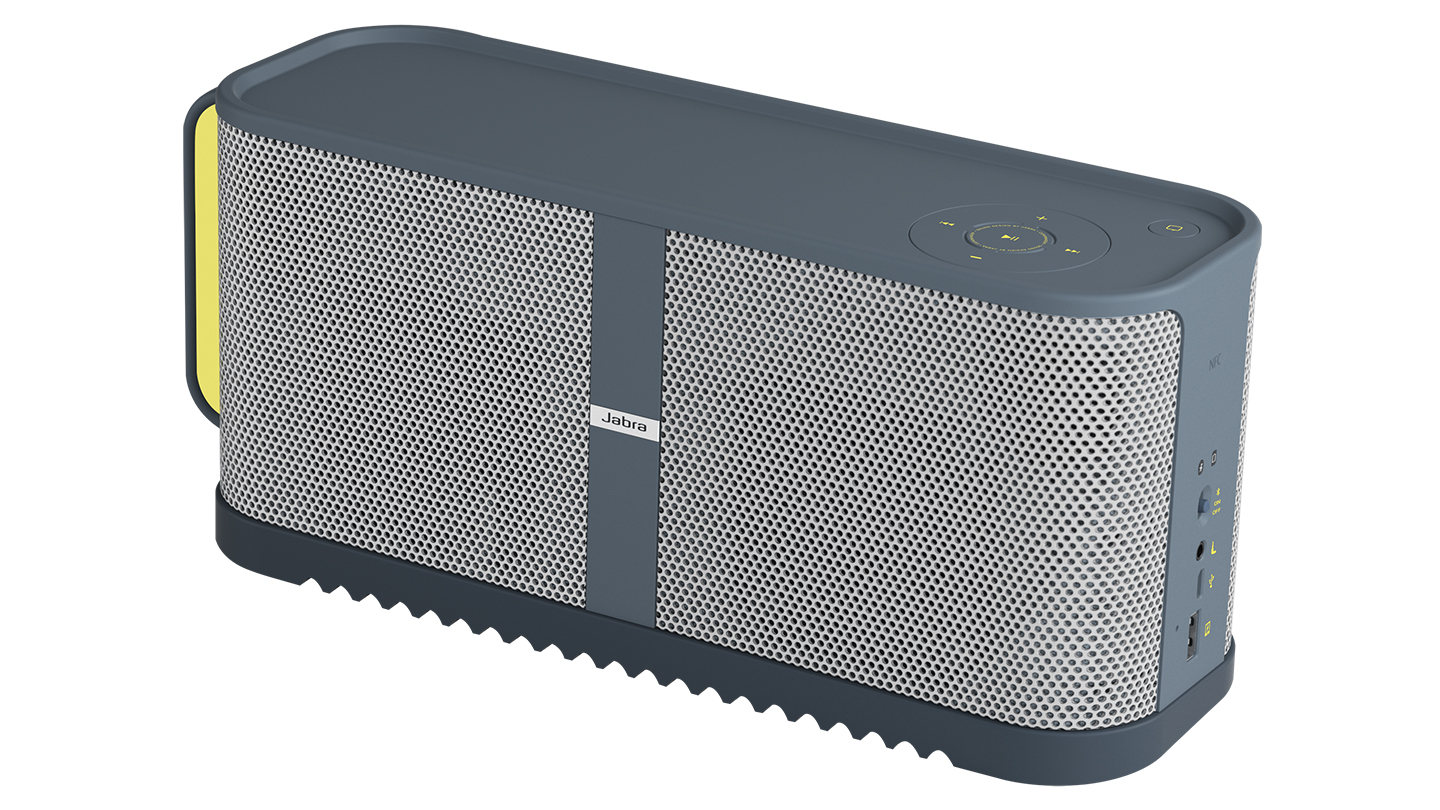 A warm and welcome new addition to my home, the Solemate Max is the latest in portable speakers from Jabra. If you’ll remember, we had high praise for its predecessor, the Solemate, in our review from 2012. How does big brother measure up? Magnificently.

Weighing in at almost 8 lbs, “Max” is the biggest, baddest, and boldest offering in the Solemate line-up. This nearly foot-long (L 11.9 x W 4.02 x H 5.44 in) little monster may be reason enough to bring back the term “boom box”. Radio Raheem, anyone? Featuring two tweeters and two woofers (pumping Jabra’s proprietary bass design), it’s well-suited for any party. The sound is rich, present, and boasts enough volume range to anger even the most placid of neighbors. 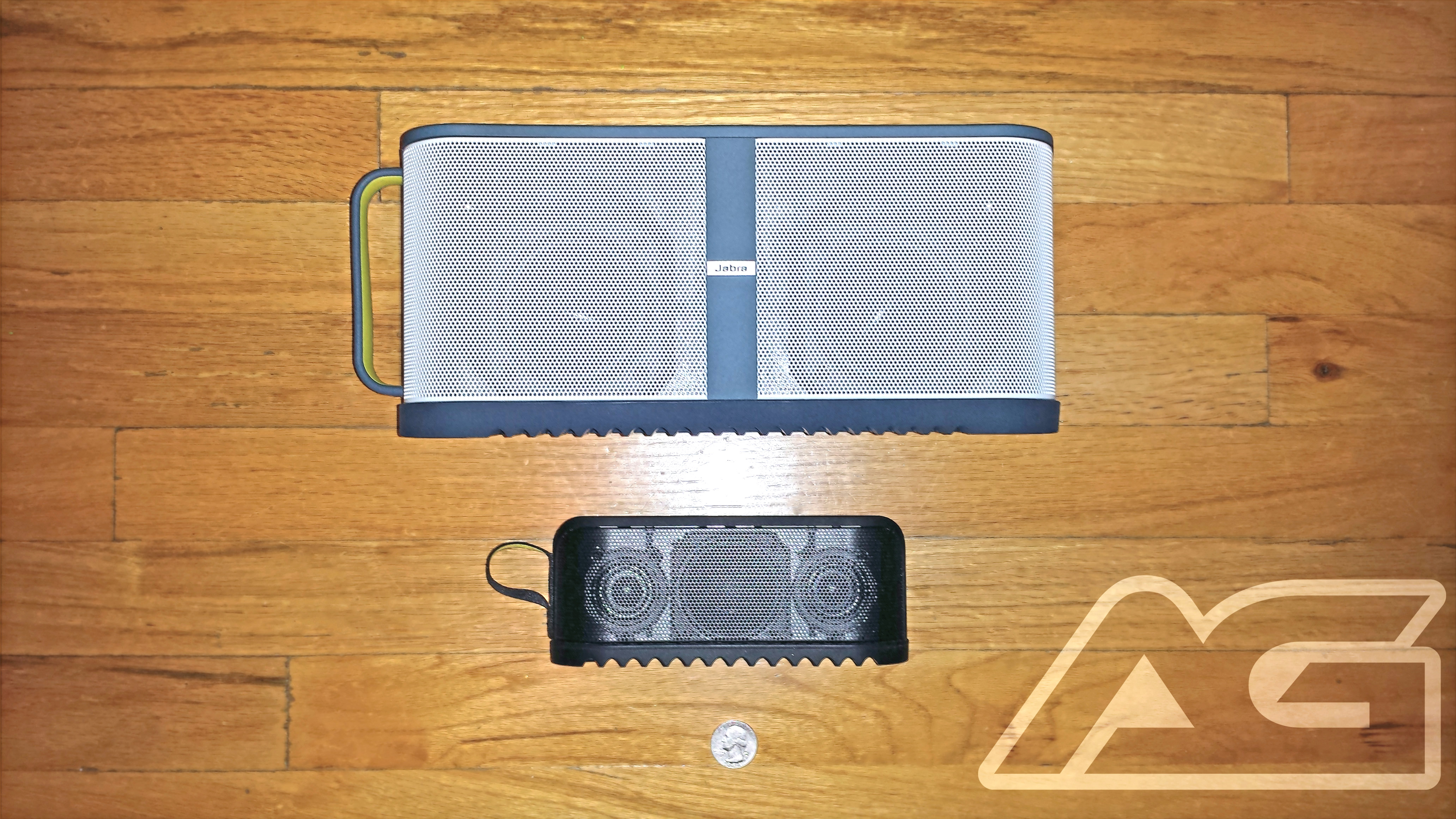 Able to be connected by Bluetooth or via the included 3.5mm audio cable (which tucks beautifully into the device’s “sole”), Max is ready when you are. Plus, with built-in NFC, connection is just a tap away. Featuring an integrated USB port, it also allows you to charge your phone while listening to the new Macklemore album — or whatever you kids are into when this review goes live. Picking up where the original Solemate left off, Max proudly sports tactile track/volume/pause controls. The battery boasts roughly 14 hours active listening time and 130 days standby.

It’s super portable, powerful, and also serves as a wonderful audio hub for your home. Mine is actually currently wired to my TV’s audio-out and is serving as a sound-bar of sorts. Maybe lacking some of the aural width that I’d like (supposedly addressed in Jabra’s companion ‘Sound App‘ — which I haven’t played around with), it still blows the TV’s built-in speakers out of the water and is in a great central location for playing music throughout the apartment.

I’d also like to briefly touch on a market that I think Jabra may have inadvertently taken pole position in : independent film-making and video production. Due to its water/dirt resistance, volume capacity, and ease of mobility, this is, HANDS-DOWN, the best solution for on-set audio playback that I have come across (although I have heard murmurings of a contender from Marshall). Gone are the days of lugging around heavy CRT monitor-sized speakers rigged with Bluetooth adapter dongles. Throw this in a backpack and you’re off to the races (cases of Bacardi chasers sold separately).

If there’s anywhere that I think Jabra may have missed the mark it would be in their choice of color scheme. In this editor’s humble opinion, they had a good thing going with the Solemate Mini and Solemate coming standard in all-black (with color options later). Why deviate from that uniform? It was sleek, minimal, and didn’t call attention to itself. While Max is nowhere near ostentatious, the slate/gray/blue probably won’t blend as easily into all home decors. With that being said, I’m a huge Batman fan and am maybe a little too quick to ask “does it come in black?”.

Add this to your home! At $399 (Amazon) it’s certainly no trivial purchase but I can honestly say that the original Solemate is one of the most utilized items in my household and Max does nothing but improve upon and add range to what was already a wonderful design.