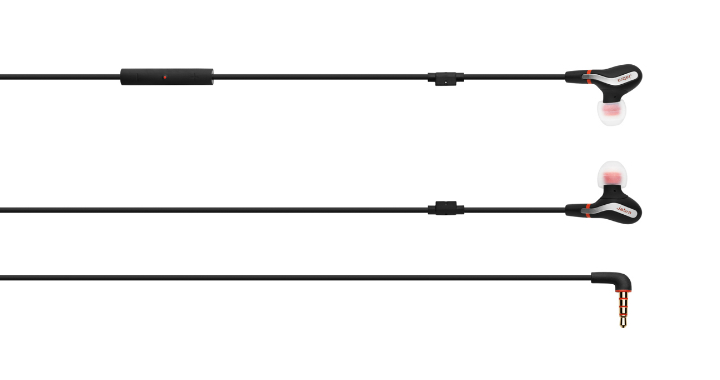 Up for review today, we have a pair of in-ear headphones from Jabra– The Jabra Vox. These headphones  utilize an 8.6mm driver at 16 Ohm. Stated frequency range is 20hz – 20khz with sensitivity rated at 120db @ 1v. They weigh in at 17g and have a cord length of 17 inches. How’s that for nerdspeak?  Ready to buy? 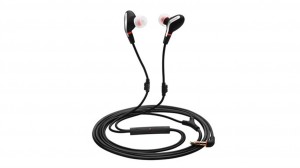 Lets start with the unbox and impressions. The box itself is a nice, clear shell showing all the major parts, mic and earpieces. Oddly it doesn’t mention the extra eargels and bag it comes with, but rest assured they are in the box.

When I first opened the case, I was instantly surprised by the build quality and materials. The cable is thick and very strong. In fact, Jabra mentions on their site the cables have been tested to 15KG of force (That’s 33lbs!). Durability was obviously a point of accomplishment for Jabra when designing these.

The cable has a nice, reinforced Y split and also small inline magnets in the cable. This way when you wind them up for storage the earpieces do not start getting in a bunch and wrapped around themselves. This sounds like a small deal, but its one of my favorite features and I think its outstanding. These are meant to be your grab and go headset. Calls, music, whatever you need. 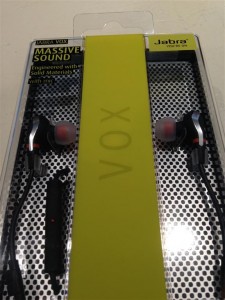 Any time I have to grab my Apple or Sennheiser earbuds they are inevitably in a strong, intricately designed web of anger that I have to deal with. After using the Jabra, I start to realize in part that comes from the earbuds moving independently of each other and getting mixed up in the winding. /Rant, this feature fixes all of that so you just grab them and use.

As mentioned, the cable is very thick and load tested. I also feel this is a great feature in case I ever need to Silent Snake someone at the gym to free up my favorite treadmill. Or I guess if it ever snags on a desk or something it won’t break or tear. Whichever is more applicable to you. Jabra also included three different eargels and a carrying case. Also this unit has the inline volume control and microphone to be used as a headset. 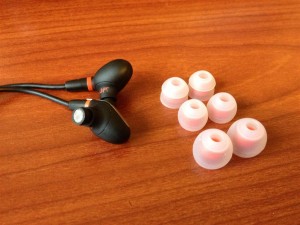 I have included comparison pictures to my Creative and Sennheiser earbuds for reference on the size. The chambers add a little size, but because of the shape it doesn’t interfere with your ear at all, and the sound quality payoff is tremendous. The included eargels are decent, and seem to be good quality. Tight fitment ensures they don’t go flying out when jogging, and multiple sizes are included. I typically need to wear the smallest size for earbuds, and felt that the package really included two types of medium and a large as opposed to a S-M-L. I did wear them for multiple hours at a time, so they are passable.

Onto sound quality! One of my favorite, yet most relative parts of reviewing audio equipment. To preface, the reference system here is a Dell Precision running a Creative X-FI Titanium HD (Burr-Brown PCM 1794A DAC) with stock op-amps. The reference headphones are a Koss ESP-950 Electrostatic for critical and Beyer DT990 for fun sessions. 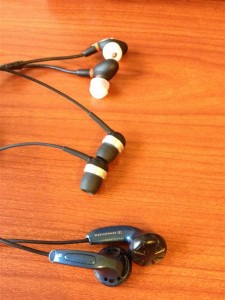 I do not have any contenders in earbudland, just my Creative and Sennheiser MX500′s. Source music is in either 320k MP3 or 24/96 FLAC from NiN’s “The Slip” album. I also did a few gaming sessions to round it out.

I feel the Vox are surprisingly detailed in the middle of the range. Voices and acoustical instruments are clear. Treble is there, a little sharp, but not sibilant in any way. The biggest weakness of the Vox performance is bass. The low end is present, but much lighter than expected. They will require some equalization to be flat below 60 or 70hz.

Of note, Jabra has included a free Dolby Digital player (Software) that you can install and use the included code to activate. I tested this on my iPhone and it certainly helps, though the default settings muddy up the midrange quite a bit. I found them best using Creatives EQ, no FX at all, with a 2.7DB @ 62hz and 3.1DB at 31hz boost. The rest of the line was fairly clean, with a slight bump at 16Khz. Once EQ’d a bit, I relistened. Strictly SQ speaking, they are far ahead of my MX-500′s, but as expected far short of a decent pair of cans. But that isn’t what they are meant to deliver. The goal of these are to provide clear sound, quality construction, and a when needed pull headset duty with the microphone. They certainly achieve that. 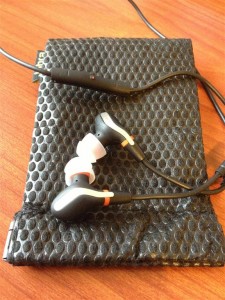 I also feel compelled to say because of the sonic characteristics, these are outstanding for “critical” gaming. Because the bass is subdued, even when EQ’d, and the midrange is so present they let you hear every last detail of what is going on. They remind me of what Creative’s software gaming mode works to accomplish by boosting the range that footsteps and whatnot fall in, and lessen the impact and low end.

I wrote most of this review not knowing the MSRP truth be told, and was very surprised to find the cost slated at $99 US. Based on just the build quality, I had expected them to cost more than that. Note that these are a headset and as such are sort of their own beast. If you are just interested in sound quality and bass impact, you will be better served by a pair of $100 cans. But, that is not where these units fight. They are small, solid, high quality and very portable. They have an inline mic so pull double duty as a headset. That said, let me summarize:

The Jabra VOX headphones are available at Amazon.com starting from March 25 for only $99.