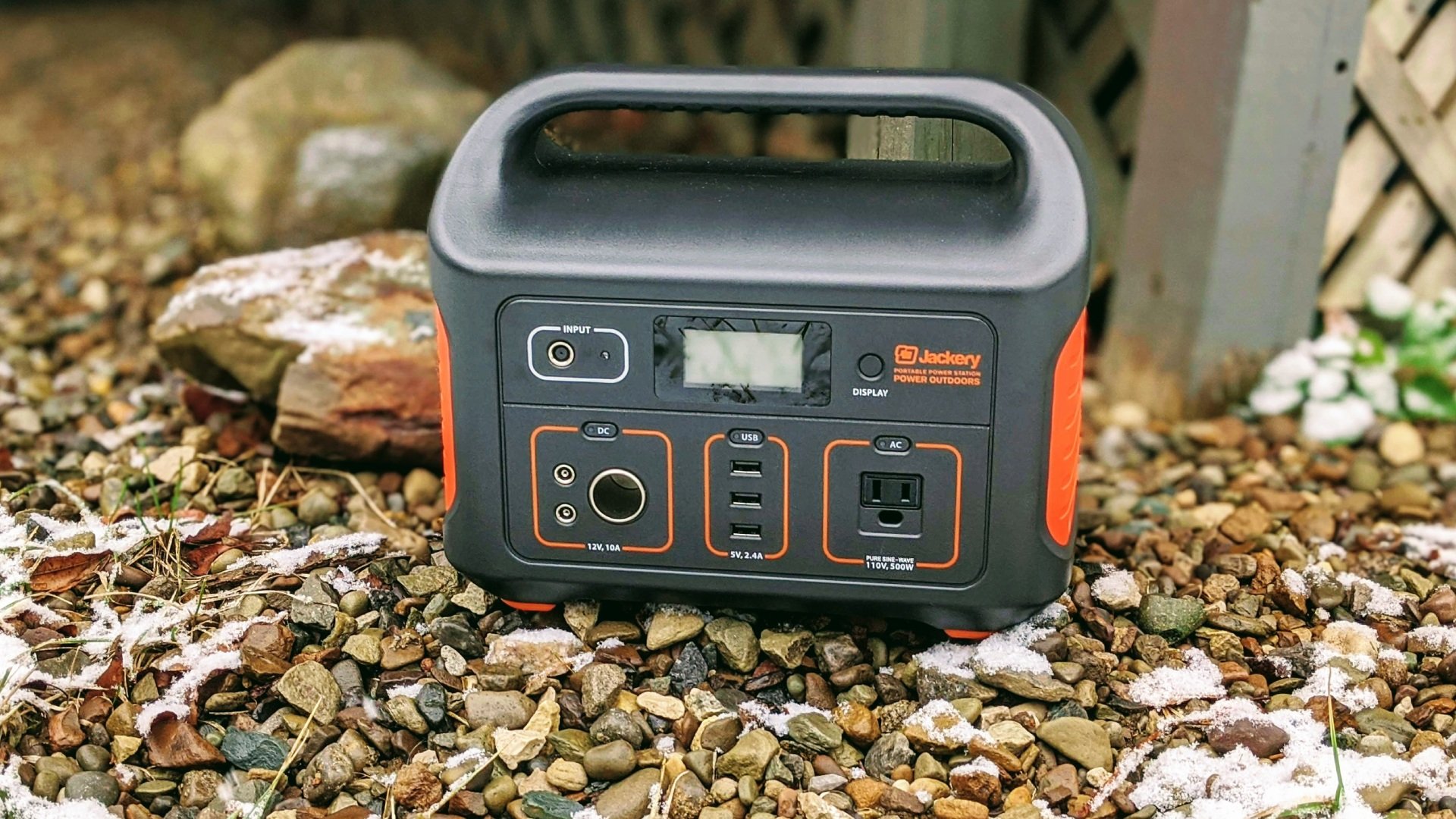 Hurricanes. Tornadoes. Fires. Bomb cyclone storms. Just about anywhere you live you’re bound to find yourself at the mercy of potential power outages. Some of us live in areas that are prone to entire seasons of bad weather while others might only run into an issue once or twice per year.

No matter the cause, going without power is a pain in the butt in 2019. It’s one thing to have a storm knock things out for 1-2 hours, but it’s an entirely different situation when you don’t expect to see power back on for another day or more. 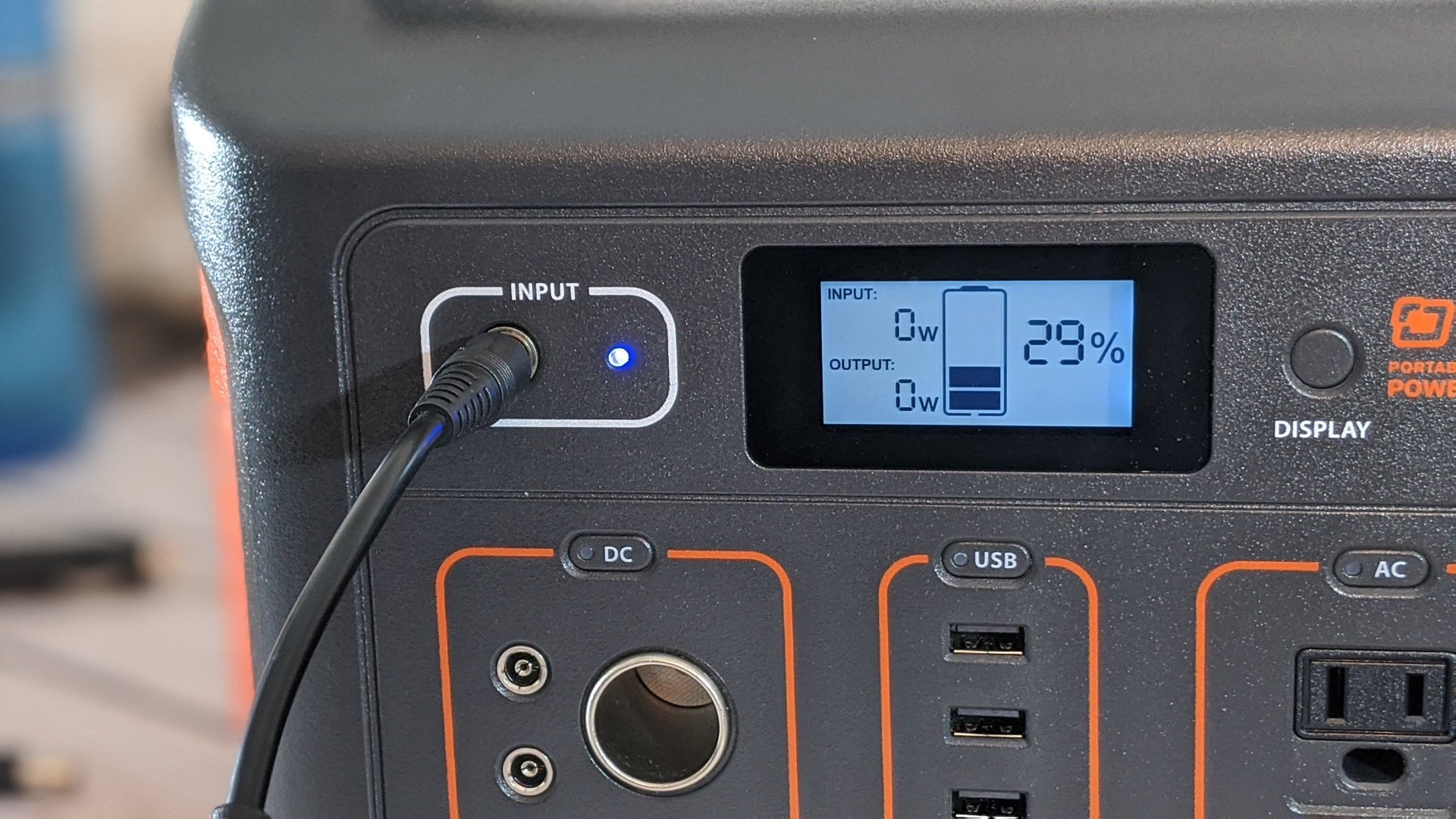 We live in the smartphone age and as such we need to make sure we’ve got battery on reserve. Since most of today’s phones pack non-removable batteries that means we need to ensure our portable chargers are ready to go.

In select situations, having a 20,000mAh portable power bank might be just fine to get you and your family through some down time. But, should the situation be more dire, you’ll want to make sure you have something more hefty on hand. Why? Because now you’re potentially looking at laptops, small appliances, and other things not working.

The Jackery Portable Power Station Explorer 500 is not your ordinary portable charger. While it does have a handle, and it does feature USB charging ports, it’s nothing like those devices you might toss in a backpack. It’s a full-on solution.

If you live in an area that’s prone to natural disasters, you’ll want to have something like the Jackery Portable Power Station Explorer 500 on hand. Moreover, if you spend a few weeks at a time living in and out of an RV or camping, this is the sort of power supply you’ll appreciate.

What is the Jackery Portable Power Station Explorer 500?

An all-in-one solution, of sorts, it weighs 13 pounds and features a number of charging ports. Further, it can be charged via three different ways: AC, car port, and solar panel. 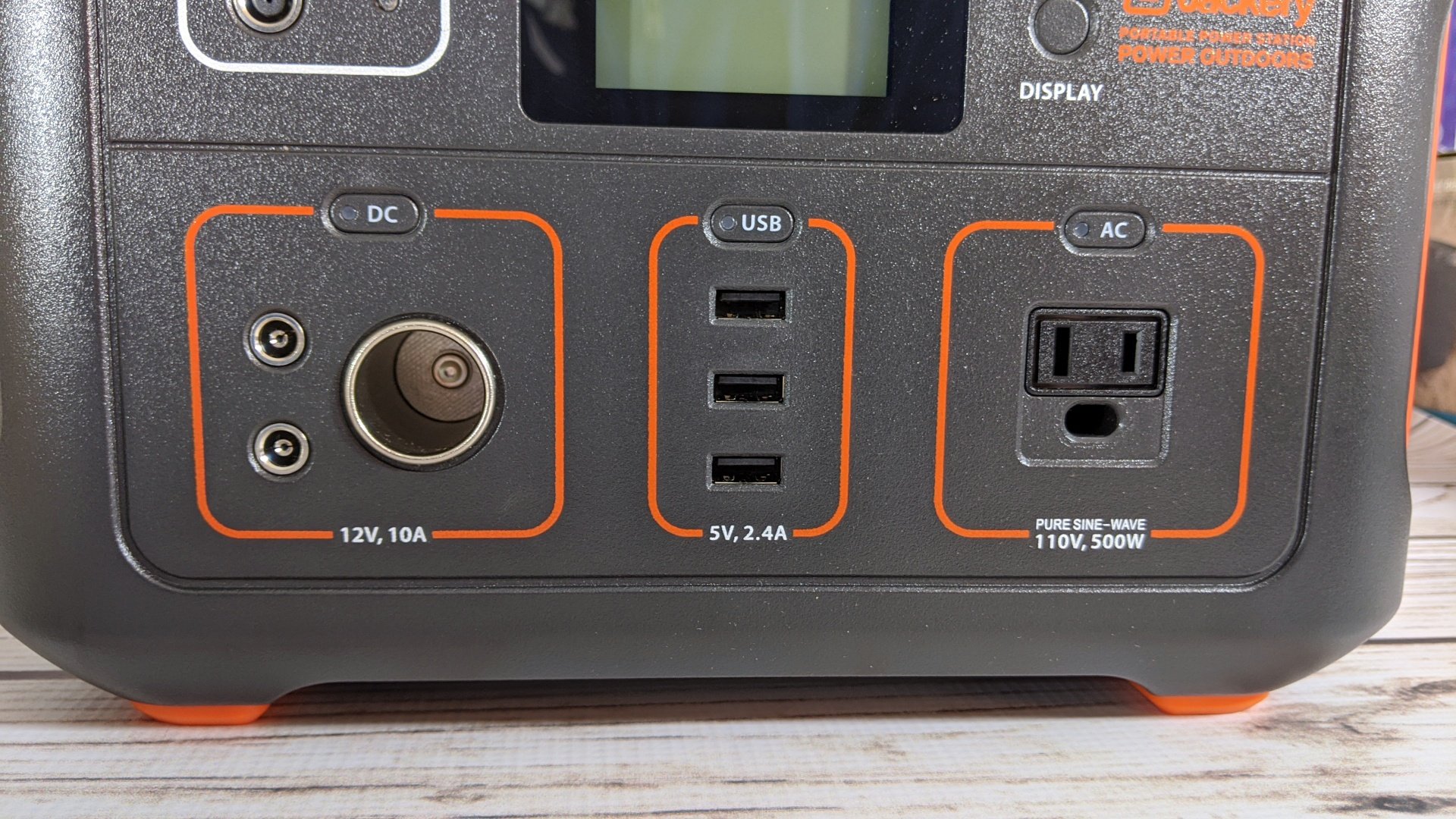 You name it, it charges it. Well, at least for the most part. It’s not the sort of thing you’ll want to use for a microwave, induction cooker, or hair dryer, but it is what you’d use for laptops, fans, phones, speakers, radios, and lamps. You can also use it for blenders, air pumps, car vacuums, and other small appliances.

Who is the Jackery Portable Power Station Explorer 500 for?

Campers and frequent travelers will certainly want to have one of these in their trunk. Not only does it provide charging options to a whole array of product types, it can be charged while on the road.

We imagine some people might have one of these in the basement just waiting for a snow storm or power outage. People who like to tailgate and throw big gatherings might also appreciate having one ready to go, too. If you find yourself hanging out in a deer blind on the weekends, you’ll probably dig the Jackery Explorer 500.

To be fair, there are other models in the Jackery line with lower capacity and power ratings. They also carry lower price tags and weigh less, too. 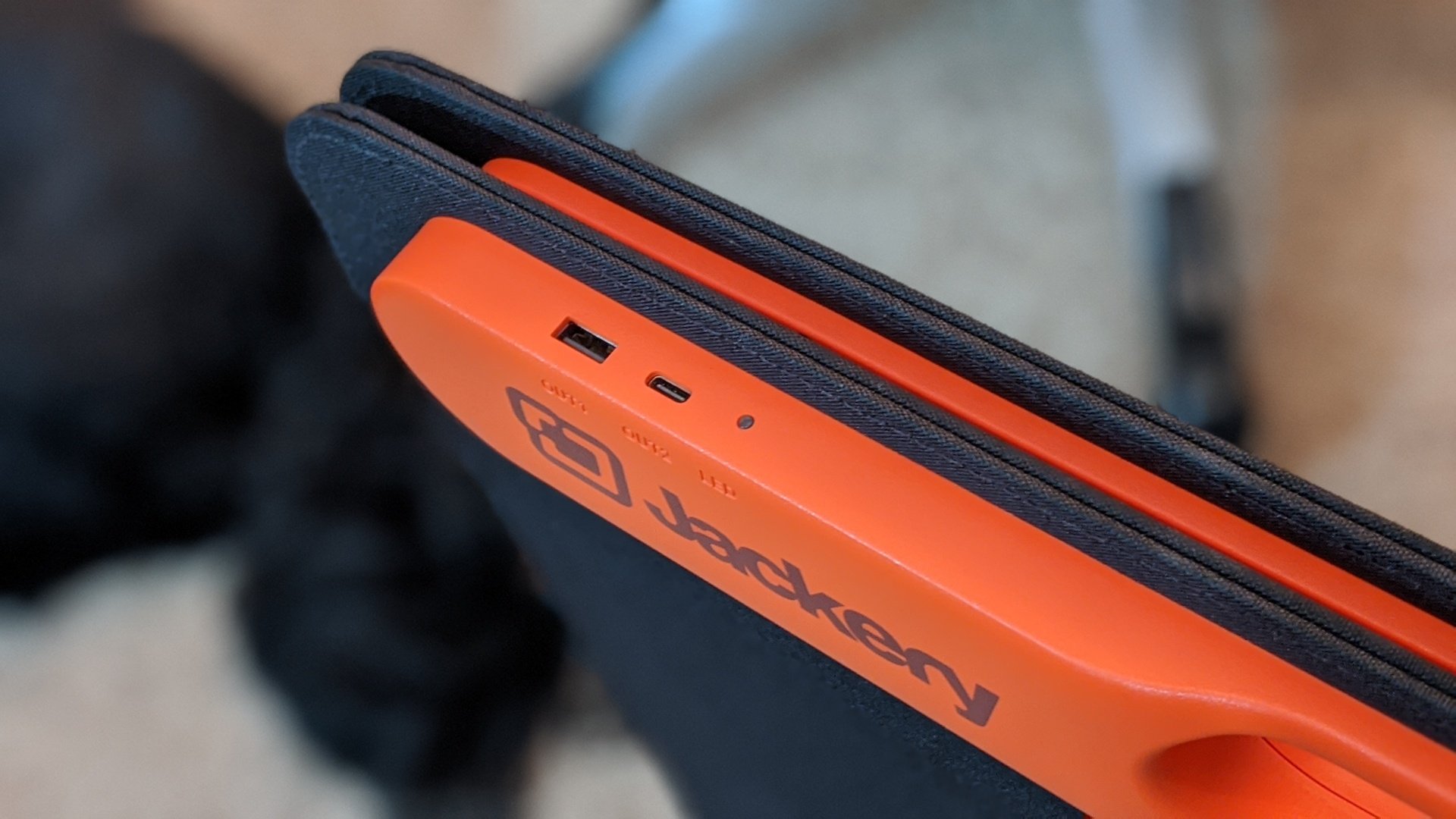 How do I charge the Jackery Portable Power Station Explorer 500?

With three options to choose from, it’s essentially up to you. You can plug it into the wall at home and keep it topped off, ready to go. Or, should you end up on the road and need to replenish it, the Jackery has a car charging port.

Another option, and perhaps one that speaks to a more targeted user, it the solar charging panel. Jackery has a couple of options here, the SolarSaga 60 and SolarSaga 100. These not only charge up the Power Station, but they also have USB and USB Type C ports as well as DC output.

Plugged directly into a wall outlet, you can expect around eight hours to charge up. If you plug into a car charger, it gets to be about twice that, or 16 hours.

The solar panel, sold separately, takes about 14 hours to charge up. This is going to vary, of course, based on temperature, or how full the SolarSaga is and whether you’re charging other devices through them at the same time.

How big is the battery in the Jackery Portable Power Station Explorer 500?

As the biggest model in its line, there’s a massive battery (518Wh) inside. To put it into perspective, Jackery says it can charge a typical phone some 50 times over. Have a laptop? You’ll get at least seven full charges off of it. 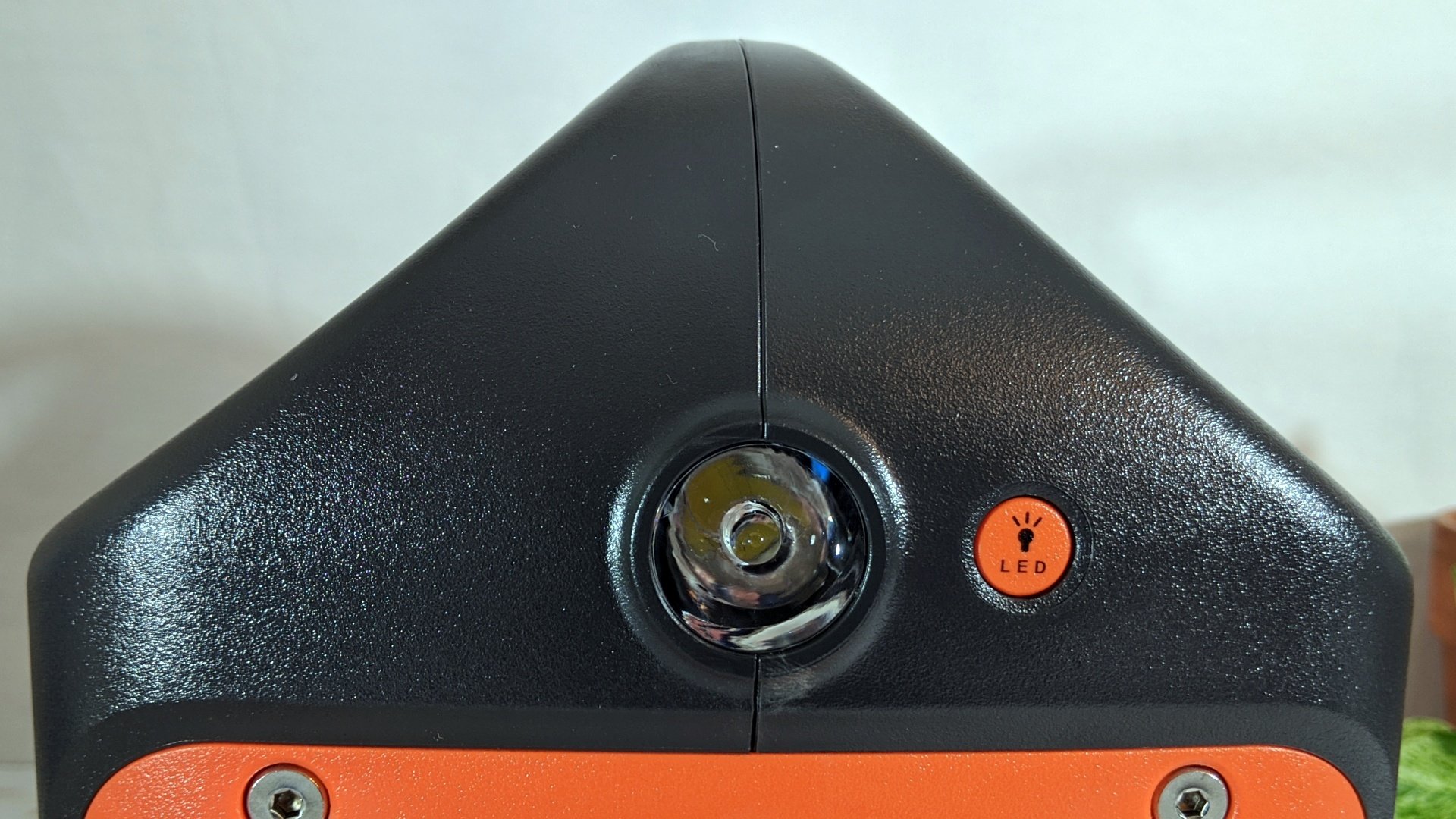 There’s enough juice here to power a 32-inch TV for some seven hours or recharge your drone about 9-10 times.

What else should I know about it?

Despite our initial gut feeling, the Jackery Portable Power Station Explorer 500 is not the sort of thing you keep outside in all weather. Its promotional material and marketing alludes to a camping lifestyle, but that’s only partially accurate.

Look through the user manual and you’ll find plenty of warnings regarding the damage that could arise from moisture, direct sunlight, extreme temperatures, and vibration. This doesn’t mean you can’t take it camping, but you won’t want to leave it outside overnight or on the picnic table in sun all day.

The SolarSaga 100, for its part, is designed to sit directly in sunlight. Spread it open and prop it against the tent or lie it flat and let it drink in that invisible sun juice. We’d be remiss if we didn’t tell you that the solar panels weight nearly ten pounds. They’re big and heavy so don’t expect to wear this on the outside of your camping gear.

Unlike a gas generator, there’s no odor to worry about with the Jackery Portable Power Station Explorer 500. It works indoors just as well as outdoor and runs fairly quiet. Even with the fans kick on it’s not distracting.

We would have loved to see a USB Type C port included but it’s not a deal breaker. Looking ahead, though, we expect to see it in future Jackery models.

One last thing worth noting is that the unit comes backed by a two-year warranty. That’s about twice as long as most portable chargers on the market and a little more peace of mind, too. 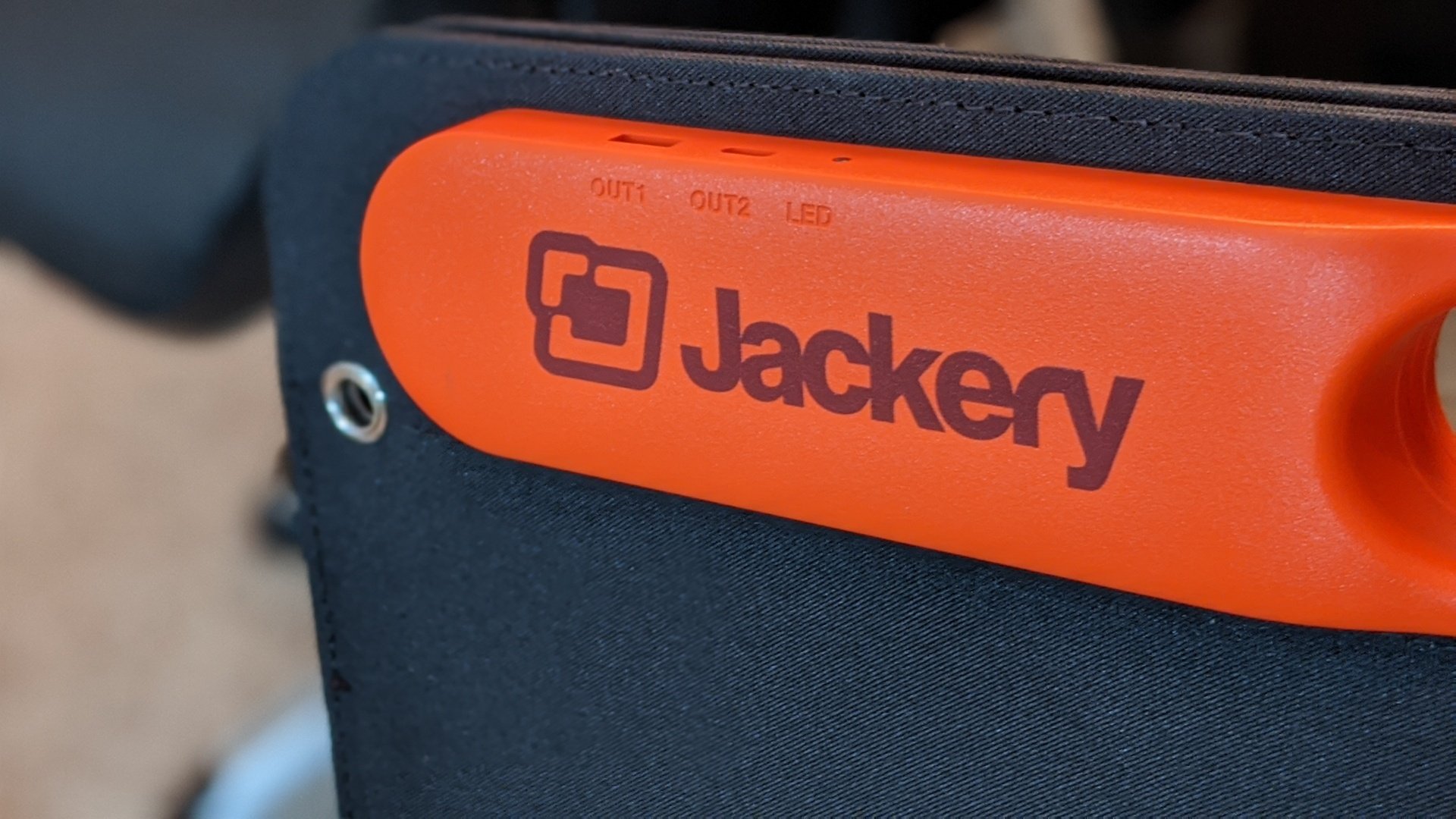 Normally you’ll find the Jackery Portable Power Station Explorer 500 priced about $500 with the SolarSaga 100 running another $300. It’s definitely not cheap, but we didn’t find any other solutions in this price range with as much flexibility.

As we were finishing up this we review we noticed that Amazon had the charger at $499, the same price as Jackery’s own website. Keep an eye on both places because we’ve seen the price change a few times at each one over the last few weeks.

If you like the idea of what Jackery puts forth here, but don’t have the budget, consider one of its lower-priced options. You might lose a USB port and/or extra DC port, or end up with something that’s not as long-lasting, but that might be irrelevant to your needs.

Jackery Explorer 500
1 of 9
Note: Select outbound links may include affiliate tracking codes and AndroidGuys may receive compensation for purchases. Read our policy. As an Amazon Associate we earn from qualifying purchases.