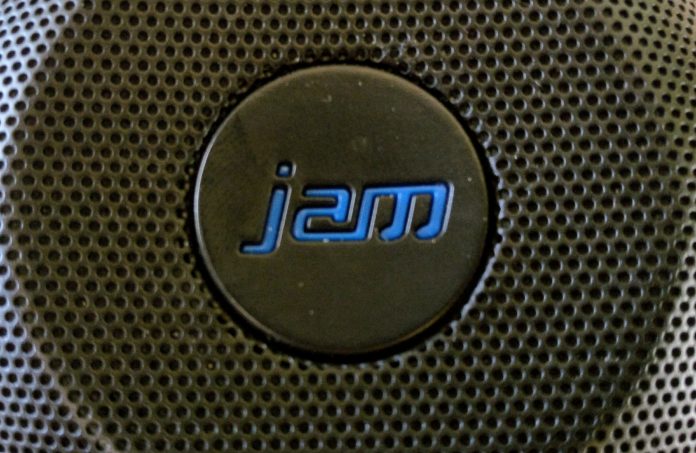 At first glance, the JAM Voice Speaker appears to be just another unremarkable Bluetooth speaker. Its rubberized black rim and glossy body are pretty but very understated – it won’t catch many glances when it’s sitting on your end table – it has solid heft and a premium feel. Powering on, we’re treated to a deep, booming series of notes that right away show off the depth of the speaker’s sound. The speaker automatically launches into WiFi mode (indicated by a twinkling charm, in stark contrast to the startup sound). In a matter of ten seconds, we’re shown the bass and treble capabilities of the device, which is a solid design move on JAM’s part. Can I just say how refreshing it is to have audio cues and voice responses in setting up a device, instead of the arbitrary flashing lights that are so common among Bluetooth devices?

From there, we move to the JAM WiFi app (which, obviously, we’ve already installed, because duh) and connect to our local WiFi network. Once connected, we log in to Amazon (to enable Alexa functionality) – this speaker even works with Amazon’s Two-Factor Authentication, which is excellent.

Now, there are really two distinct modes to this particular product. JAM Voice launches in WiFi mode, but a quick press of the Bluetooth button on the bottom of the device transforms it from an Alexa device to a standard Bluetooth Speaker at the press of a button. The battery life is only four hours, but given the size and power of the speaker, that’s not terribly surprising.

In WiFi mode, JAM Voice is really meant to be a semi-permanent emplacement, similar to Amazon’s Echo. It has Alexa, TuneIn, iHeart Radio, Tidal, and Napster built-in, and it also supports Spotify via Spotify Connect. One thing it doesn’t support, however (in this mode at least), is Google Play Music – which is a bit of a problem for people like me that are rabid users of the service.

The real shining beacon feature in JAM Voice is the Alexa integration. It’s not as fancy as the Echo – it doesn’t trigger via voice command, only via a single button press, for example – but for a $60 device ($34.99 on Amazon!), it’s quite robust!  The full Alexa suite is at your fingertips with JAM Voice – Music, Books, Lists, Timers/Alarms, Smart Home…it’s quite the bargain. As such, this puts it on a similar level as the Echo Dot, at $50 – which can’t function as a standalone Bluetooth speaker.

This mode is a bit more standard – when unplugged and switched into Bluetooth Mode, JAM Voice becomes a typical Bluetooth speaker, with a four-hour battery and audio mirroring as usual. Granted, four hours may not seem like much, but in such a portable package and so much functionality crammed in, it’s well worth it.

The companion app to this speaker is well-designed and full of functionality, with a few small flaws. A couple of the features that really stood out to me are the ability to group other JAM speakers together, and an intercom feature. The former feature allows you to use groups of JAM speakers to stream audio together, while the latter allows you to record a message and play it to any number of JAM speakers in a group – handy for talking to people in other rooms or other floors.

There are only a couple minor annoyances – firstly, the app only supports the on-screen navigation buttons – not the navigation bar’s ‘back’ button. More than once I found myself exiting the app instead of returning to the previous page – a minor inconvenience, but a noticeable one.

As mentioned above, the app has TuneIn, iHeart Radio, Tidal, and Napster built in. All you need are logins for each – in the case of TuneIn, not even that – and you’re off and running. Spotify is also supported, though you’ll need to download the app on Google Play first.

The thing that’s most noticeable for me about this device is how loud and deep the sound quality is coming from such a small package. The bass is nice and solid, and the sound is nice and clear. If controlling the speaker by Bluetooth isn’t your thing, there are standard rubberized Play/Pause, Forward, and Back buttons on the rim of the speaker.

One strange thing I found about the hardware buttons is that when hitting max volume, it plays a small chime that actually cuts out the music streaming for a solid two-to-three second until it comes back. Very odd. The response time between the app and the speaker is great – almost instantaneous – and the app is easy to use to control playback and volume.