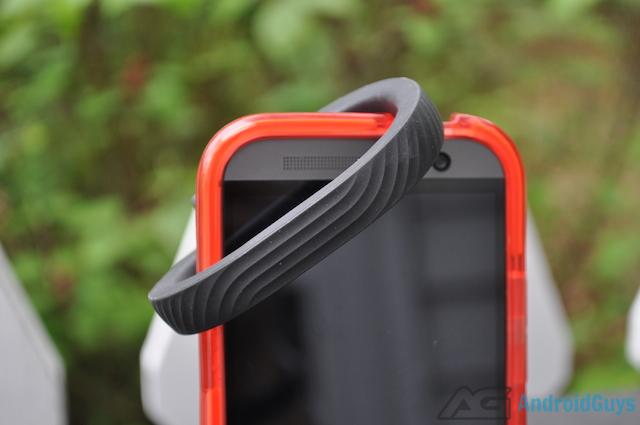 The Jawbone UP24 is one of the latest fitness trackers to hit the market along with Nike and Fitbit.  I have previously reviewed the Fitbit Flex, which we really liked, but today’s focus is all about the UP24.  The UP24 is the newest addition to Jawbone’s fitness line up.  The device allows you to track workouts, food/drink, sleep, but one of the really cool features are the smart alarm and idle alert.  Don’t worry we’ll get to these all very soon! Reigning in at $150 it is a little more than I would like to spend but lets dig into it and see what we got!

Lets go ahead and clear the air, because compatibility is the number one issue.  The previous UP was compatible with iPhones and Android devices but did not offer any wireless sync options.  However, the UP24 offers wireless sync, but only for Android or iPhone devices that support Bluetooth 4.0. Jawbone’s website offers a complete breakdown of what devices are compatible with the band, just to make sure. 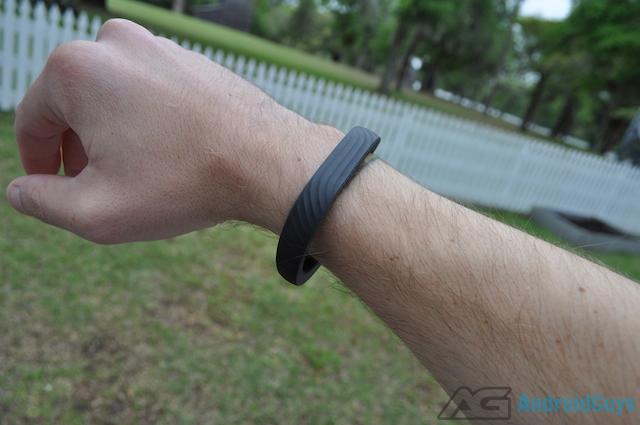 The band feels great on my wrist and is very comfortable to wear day or night.  The band is made of hypoallergenic TPU rubber and is very rugged feeling.  No worries in this department.

As far as water goes, don’t submerge it!  Jawbone says the band is “Splash-resistant”, which is a downfall for me because I am the kinda guy to just throw it on and forget about it.  I’ve caught myself with it in the shower and immediately take it off, there was no damage to the band, but I hate having to remember to take it off and put it back on.

I’ve really been impressed with the look of the UP24.  The band goes on easily and fits comfortably, however it is crucial that you pick the correct size band for your wrist, Jawbone’s website offers an easy to use tool to make sure you get the best fit possible. While wearing the band I did find that it will snag and almost rip off if you’re not careful.  This is one issue that I did not like, because I don’t want a band that has to be ultra tight, but I don’t want a band that is too loose and could possibly get ripped off my wrist.  Again, make sure you get the correct size!

The band itself shows no data and has a silver square on one end of the band allowing you to activate the band or put it into sleep mode.  That’s pretty much all there is too the band itself.  It is very simple and sometimes simple is the best way to go.  The battery life of the UP24 is roughly seven days and it can also be checked within the app as well.

The other side of the band sports a nice Jawbone logo in silver which also doubles as the charging port.  Just pull off the Jawbone cap and it reveals a 3.5mm jack which plugs directly into the USB charging cable provided.  It takes about an hour and a half to fully charge and holds a charge for about 7 days which coincides with what Jawbone’s website says as well.

The app itself is quite nice but again lets talk compatibility.  The UP24 requires Android 4.3, so keep this in mind especially if you are on a carrier who hasn’t pushed the latest update out for your device.  I am using the HTC One (M8) which isn’t a problem, but make sure especially if you’re buying one as a gift. 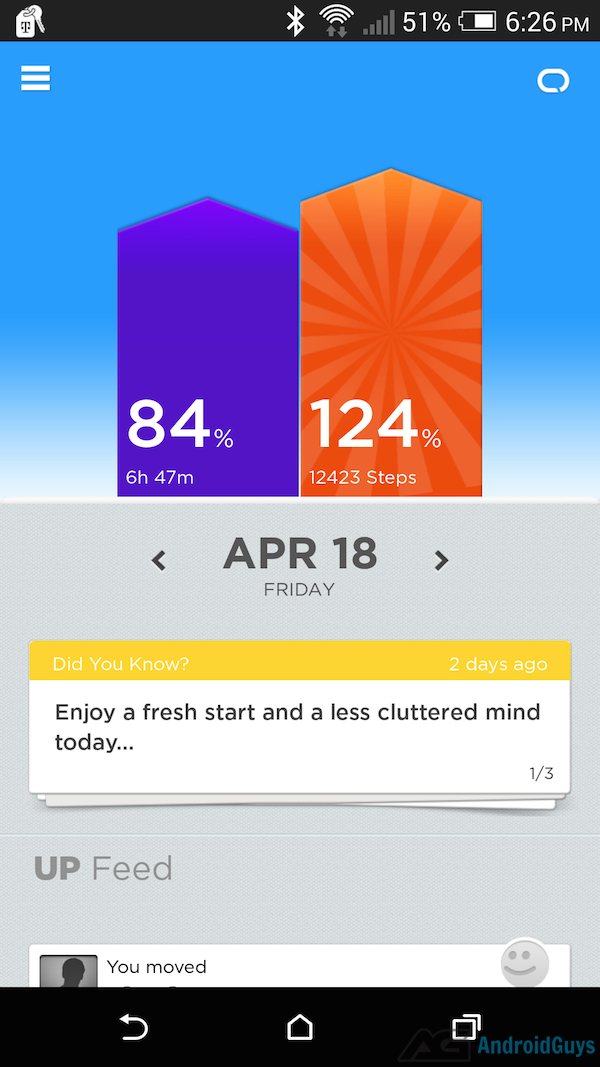 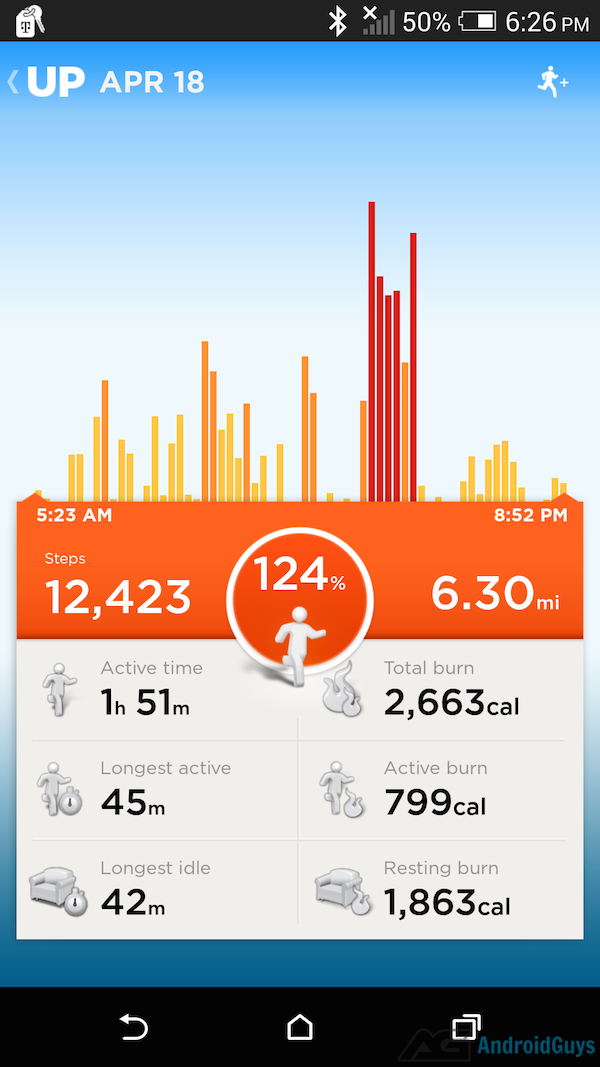 The app is super easy to setup and get your UP24 synced and working correctly.  It took me about 2 minutes to get it all setup.  Once in the app the UP24 shows your total steps and sleep from the night before.  You can then choose which one you would like to look at in more detail.

When looking at your steps it gives a complete breakdown of when you were active, calories burned, and how long you sat around watching House of Cards on Netflix (Guilty!).  The colors and the look of the app are really nice and navigating is a breeze. 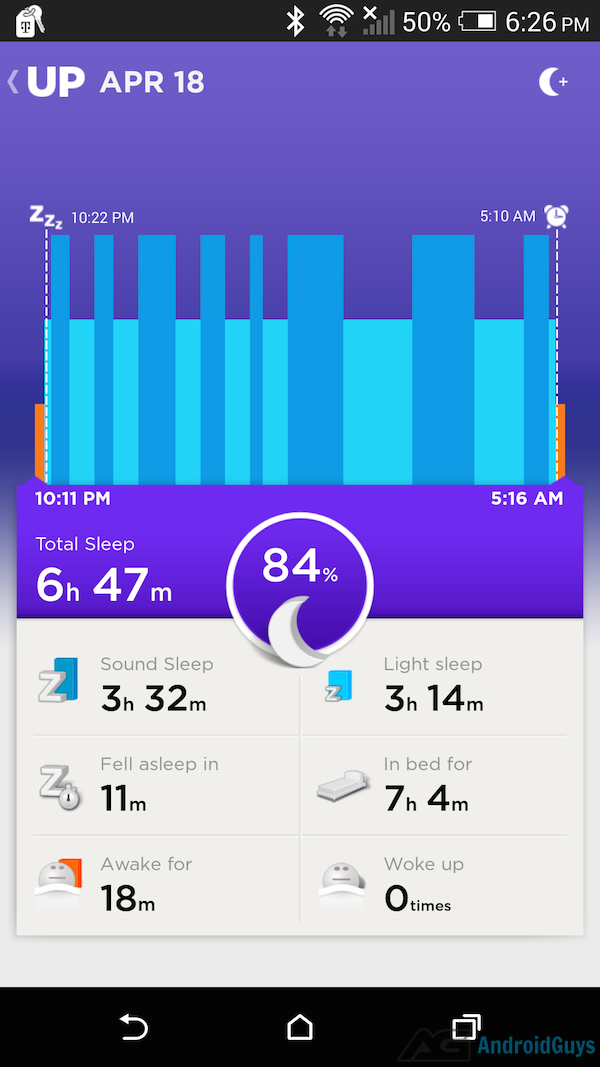 Now, onto the sleep side, which is one of my favorite parts!  I really like the ability to see how much sleep I was getting, and not getting! Right before you pass out for the night, remember to hold down the silver button on the end of the band until it enters sleep mode.  Again, like checking out your steps, the sleep side is very easy to navigate because it’s all out in front of you.

Of all the features of the UP24, my favorite or two favorite are the Smart Alarm and Idle Alert.  You can set an alarm for the morning and instead of some crazy sounds blaring, it will gently vibrate on your wrist.  Now you’re probably saying, “Ok…Other fitness bands have that”, and yes you’re right.  However, the one feature that sets it apart is that you can set a daily wake-up time within the app so that your band will wake you up at the best time based on your body’s natural sleep pattern.  Kinda cool!

Alright, onto Idle Alert! This feature allows you to set an idle time, so if you’ve been sitting around for 45 minutes not doing anything, it will vibrate letting you know to get moving! Now I wouldn’t go tell your boss that you need to go for a power walk or anything because your wrist vibrated, but if you’ve been watching Netflix all afternoon, it might not be a bad idea!

I have really enjoyed the UP24.  It feels good and I forget it is there most of the time.  The app is wonderful, vibrant and easy to as well.  However, the biggest downfall for me is the inability to get the band wet! Again, I hate taking it off and putting it back on to take a shower for the fear of ruining it.

The device is definitely work the look, it is alot cheaper than the Nike Fuelband, but it is pricier than the Fitbit Flex. However, this device provides you with true insight on your activity and it is a worthy contender for your money! Check out all the different colors at Jawbone’s website here!