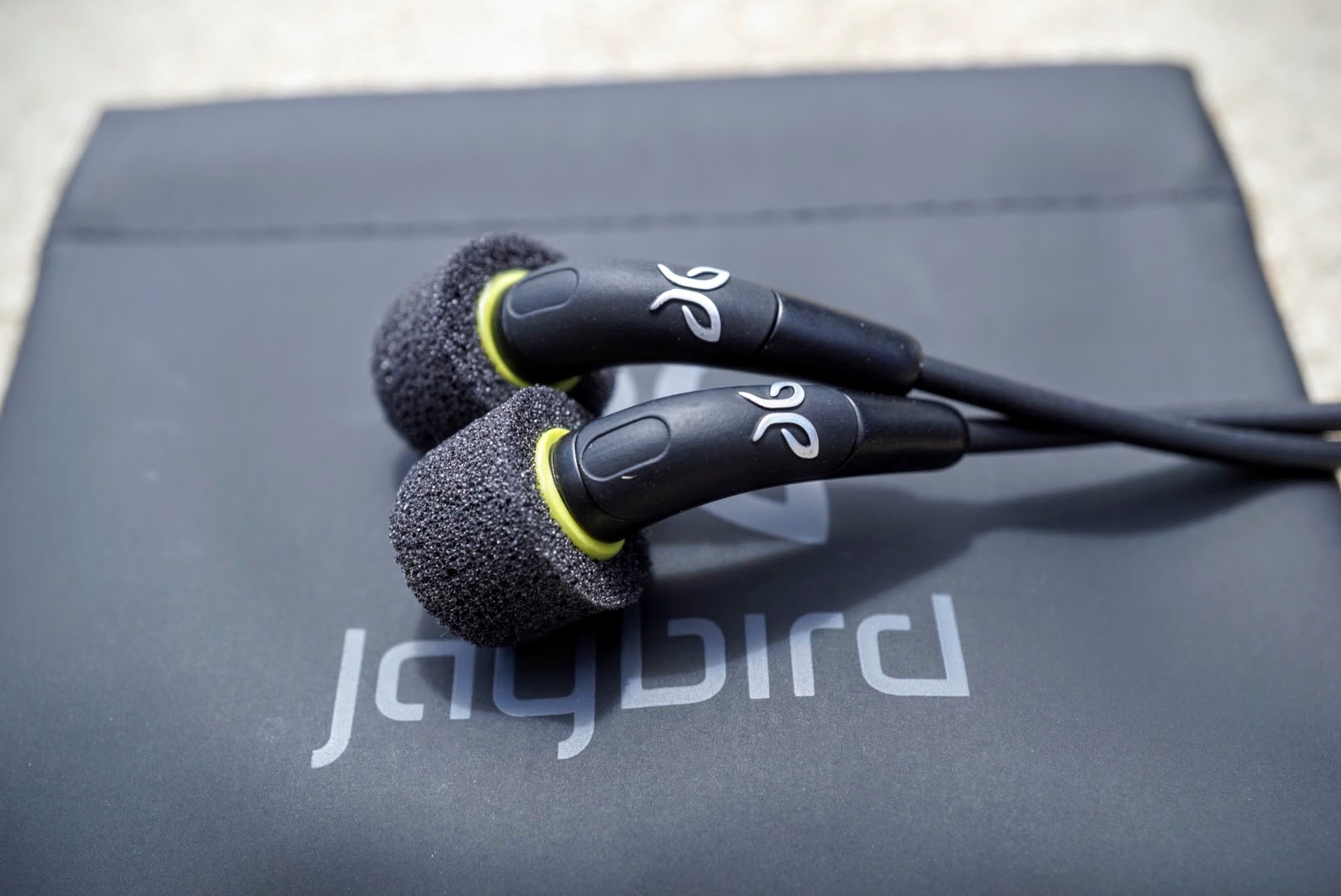 Jaybird is a company that was founded in 2006 with a goal to bring us the best wireless earbuds. It’s founder and CEO, Judd Armstrong, has made sure to hold his company to that goal. Today Jaybird met the goal again with the Jaybird Freedom Wireless buds. Jaybird continues to innovate and push the limits of wireless technology just like the athletes it partners with.

Judd Armstrong knew, a decade ago, there was a need for accessories that could keep up with our lifestyles. While many of us were happy with our wired headphones, Judd was not. From Crossfit, to beach volleyball, to training in a gym, Judd wanted wireless headphones that would stay out of our way while still maintaining durability and sound quality above all else.

Since 2006 Jaybird has defined what all wireless headphones should be given the limits of technology. A new definition has been set with the Jaybird Freedom Wireless buds which officially launched today. All other manufacturers will be telling their designers to keep up or else… 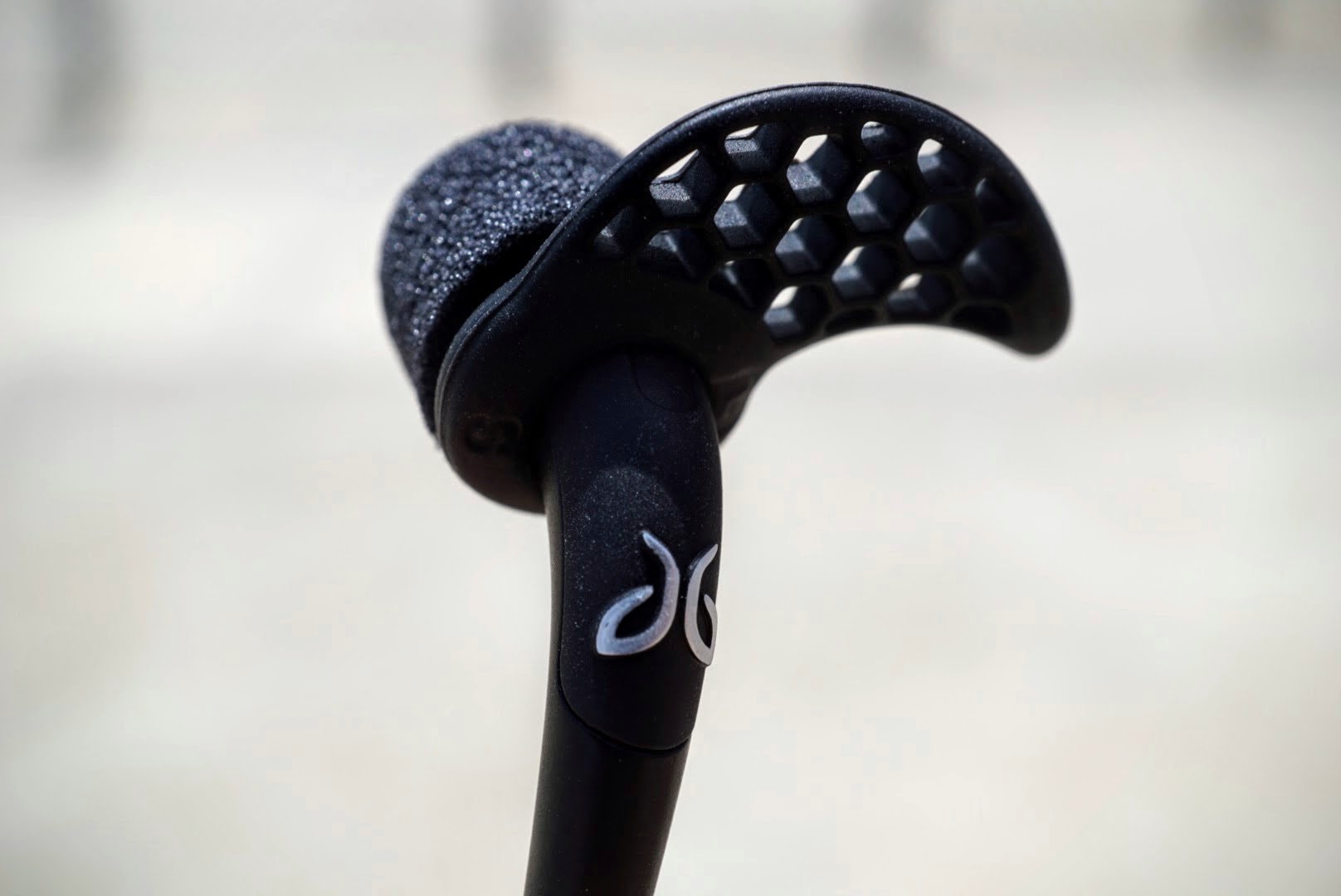 The Jaybird Freedom Wireless earbuds are smaller than any wireless earbuds you have ever seen. Jaybird redesigned wireless earbuds with the Freedom by moving all of the electronics inside of three button in-line remote. This redesign allowed for the extremely small earbuds that can fit anyone’s ears. They’re also small enough to be worn inside of a motorcycle helmet, another first for wireless earbuds. 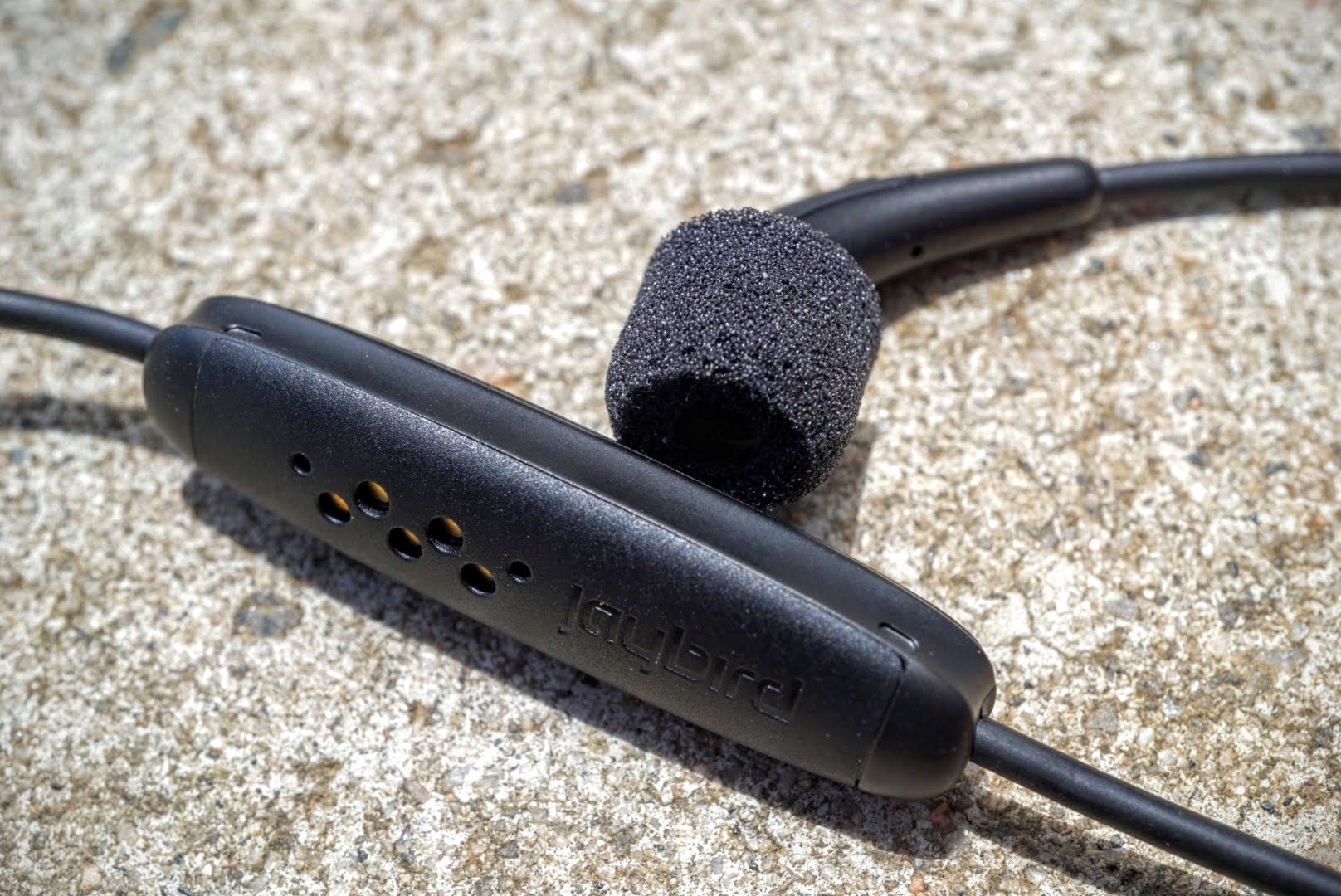 What is also nice is the feel of the earbuds which are mostly made from metal. They are extremely sturdy and even cold to the touch. The three button in-line remote control has five openings on the back which allows for charging through a clip on connector.

The clip on connector is where you will find the microUSB charging port. Other wireless earbuds have a rubber cover over the microUSB charging port which makes for difficult charging since you have to pry it open. The Jaybird connector is a nice touch for those who are just getting home from a workout, and simply want to drop their wireless earbuds into a charger. If you’ve ever pushed yourself hard enough, you would know that after a hard workout your hands are probably shaking and plugging in a microUSB cable into a small port is not easy to do. 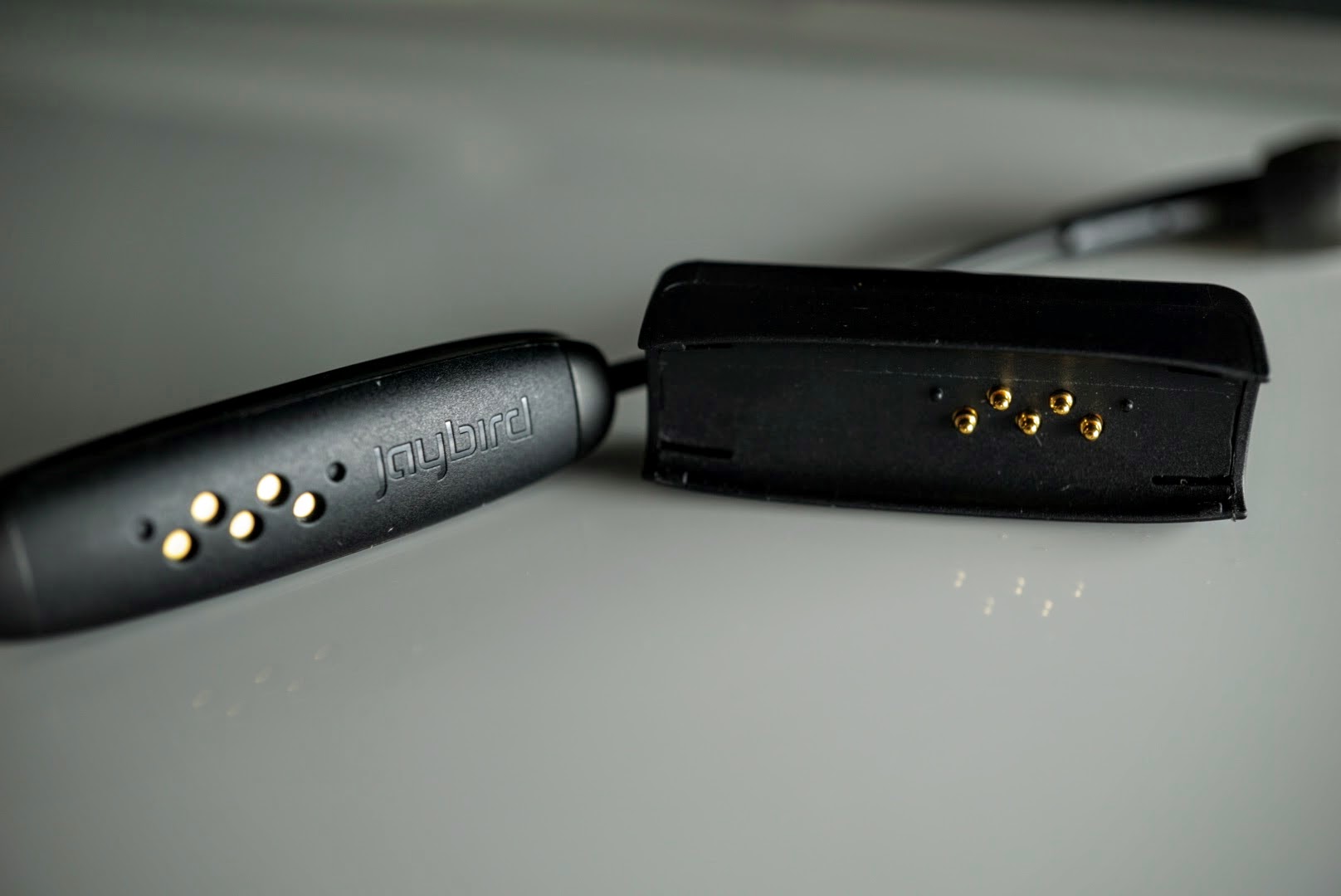 Better yet, you can even bring the charging adapter along as it has enough power in it to get you double the advertised play/talk time. It’s a micro sized portable battery. 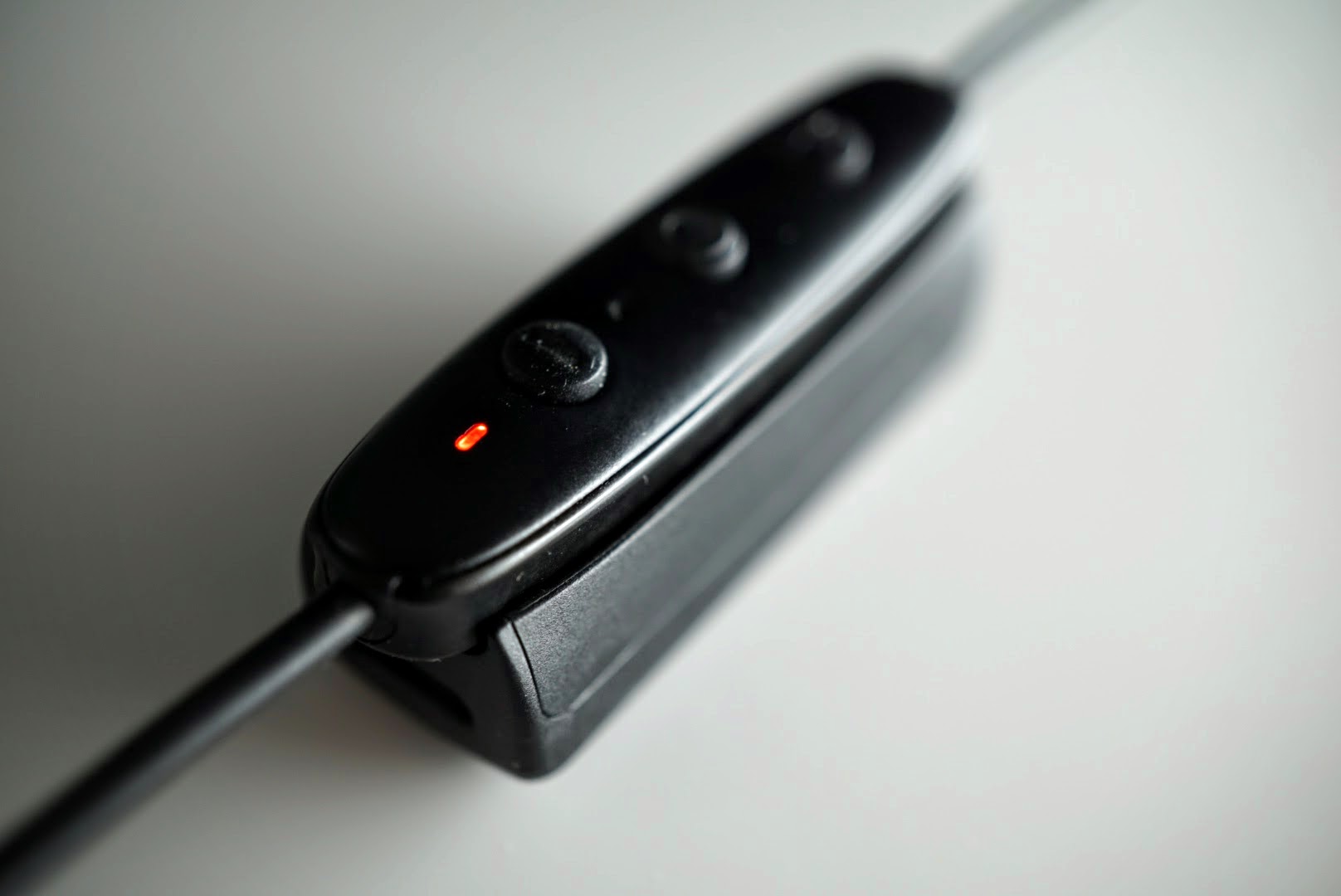 Even the cable that connects the earbuds together is high-quality. It isn’t as thick as other cables I have seen or used before, but it is durable with a nice tangle free rubber coating.

Included in the box are silicone ear tips, which come in S, M, and L. There are also sport foam ear tips from Comply which provide a more comfortable fit depending on your preference. Clips to shorten the cable are in the box as well as a clip to pin the cable to your collar. Jaybird thought of everything even with included ear fins which hold the earbuds firmly in place. Although these earbuds are so small and light-weight that you might not need them.

Jaybird literally thought of everything with the Freedom, from build to accessories, you won’t find a better designed set of wireless earbuds.

Up until now, all wireless earbuds packed all of the electronics into the ear pieces. This has made for large earbuds that require hooks or fins to stay in your ear. It’s also limited them to people with average to large sized ears, leaving those with smaller ears and ear canals to fend for themselves.

The Freedom wireless earbuds are so small and light-weight that you can keep them in your ear without anything to keep them in place. If you’re going to use the Freedoms in a beach volleyball setting, you can wrap them around your ear or use the included ear fins. You will not find a better designed and built set of earbuds on the planet. 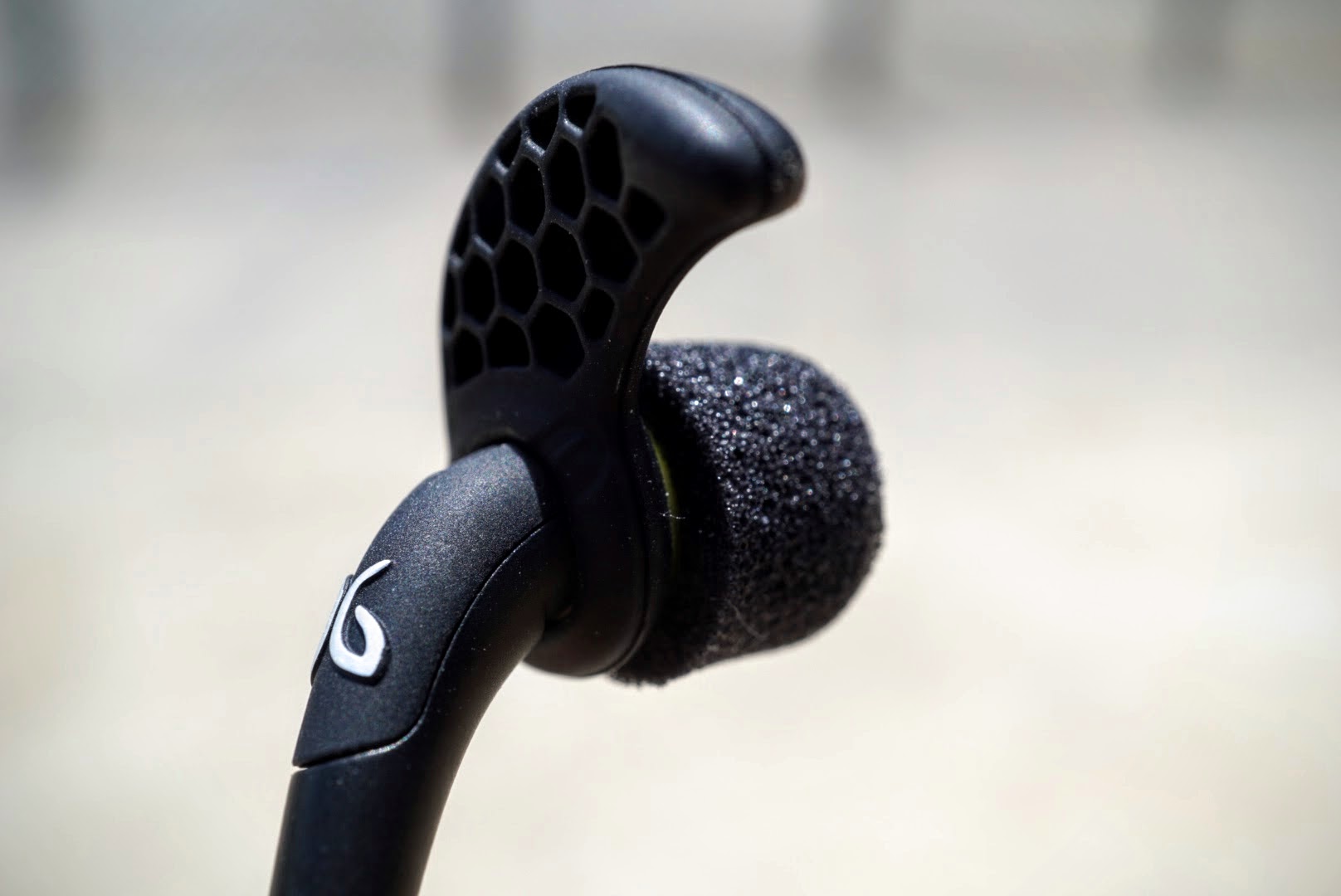 With as much focus on the build that Jaybird put into the Freedom, it’s easy to think the engineers may have sacrificed sound quality to jam pack everything into such a small package. Yet Jaybird may have made the best sounding wireless earbuds with the Freedom.

Sound over Bluetooth can be underwhelming, and has been for the most part over the past decade. Bluetooth was not originally developed for music, instead it was designed to transmit voice calls with minimal data to preserve power. There has been recent developments like the aptX driver which improves sound quality, but Jaybird decided to one-up the competition again. It developed an Android and iOS app called MySound which allows users to control the EQ settings on their Freedom wireless buds. 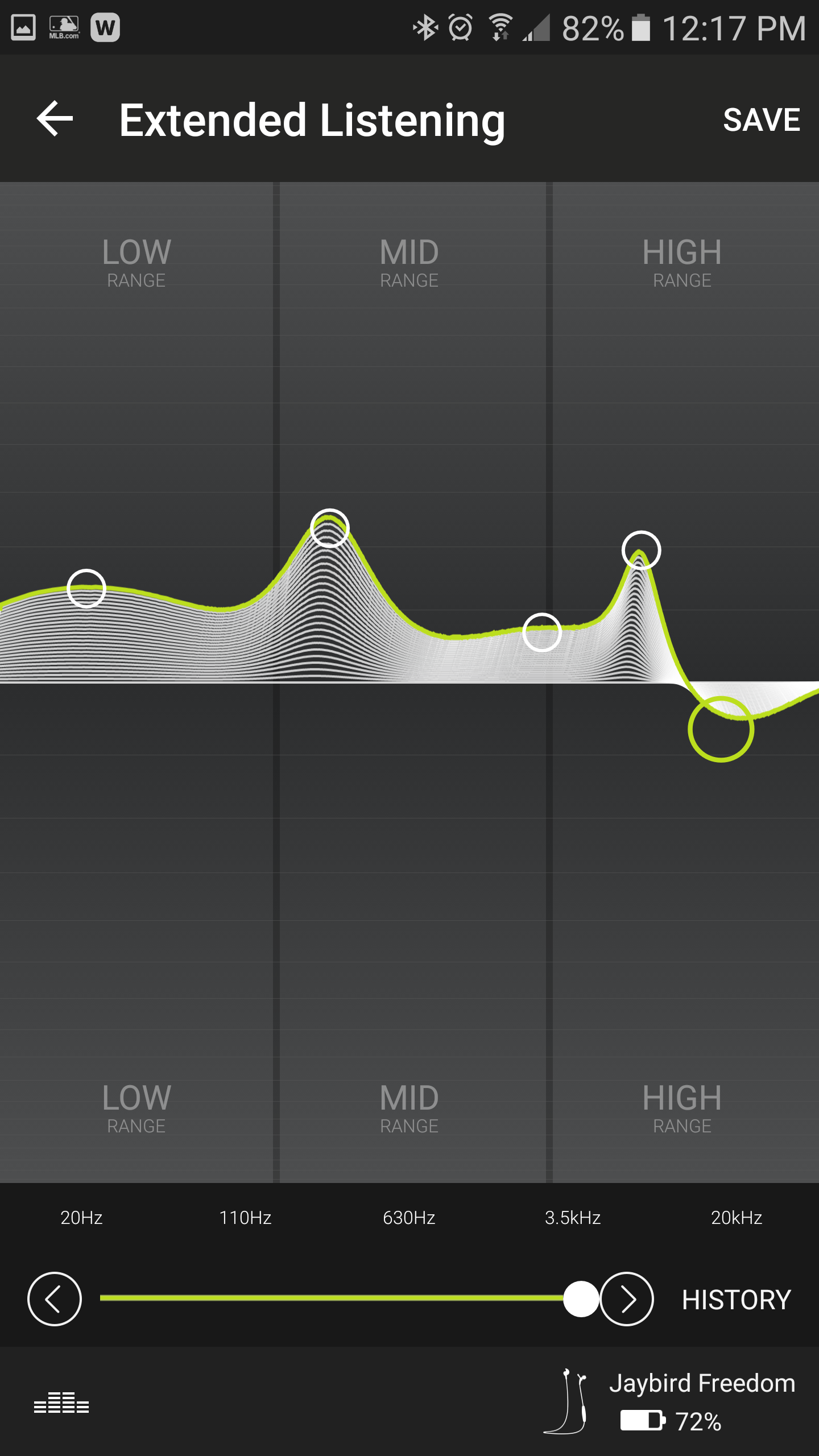 If you’re the type who loves bass, simply touch your mobile device EQ and drag up on the low range. Or if you prefer detail and clarity, you can emphasize the mid and high range. No matter which setting I tried, I actually felt like I was listening to wired headphones. Jaybird gives users multiple EQ presets – modes like Bring the Bass, Workout, Warmth, or even Kerri Walsh’s preferred settings are all available if you don’t want to custom set your own sound. 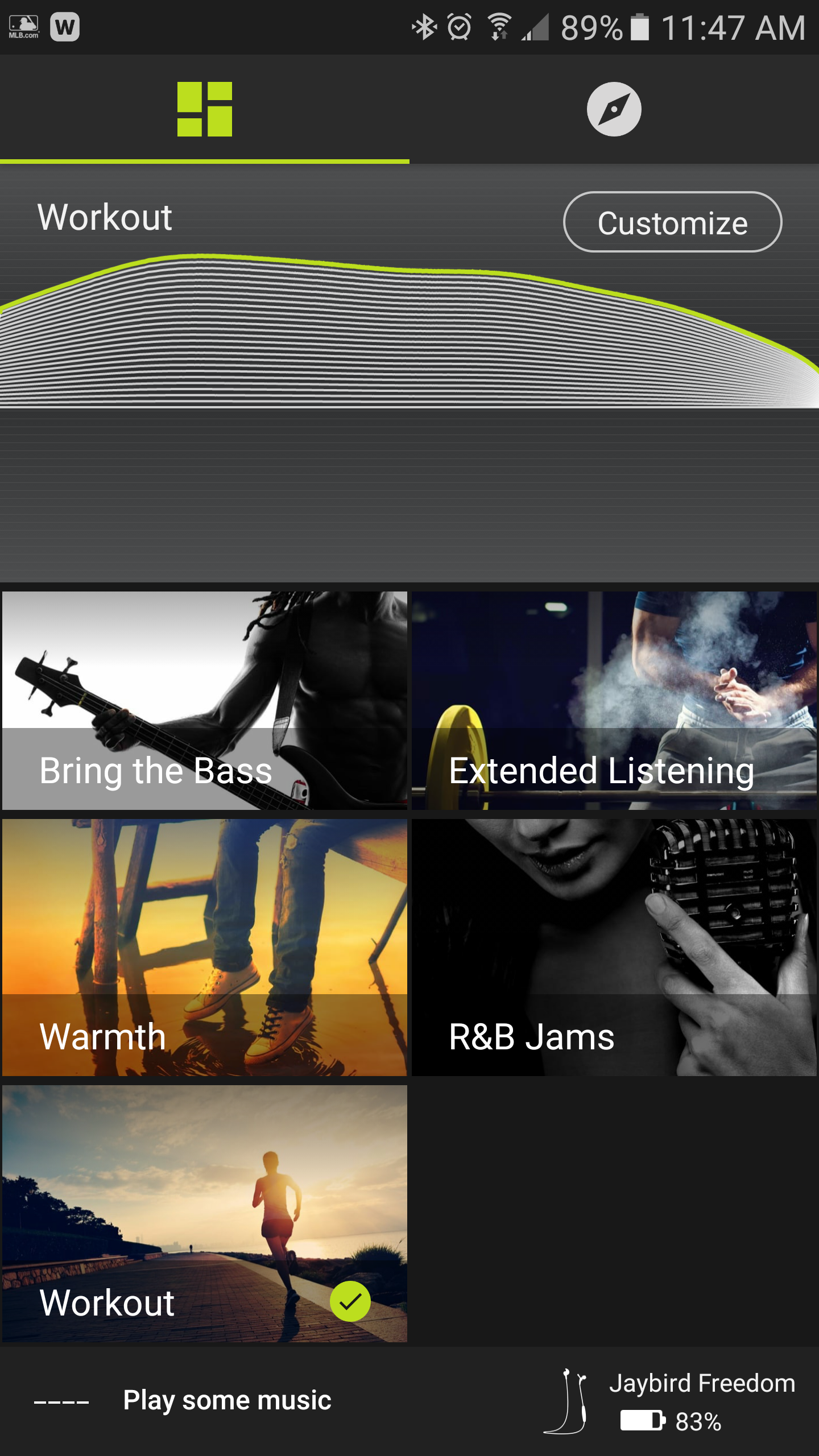 Wired headphones typically have more detail and power, but Jaybird managed to get all of that with the Freedom buds. The test songs I like to use as references are Get Lucky by Daft Punk, and Jack of Speed by Steely Dan, and they sound extremely clean with the Freedom buds. The Freedom buds also have a great sound stage, which is difficult to get with such small enclosures. The song Melody by the Rolling Stones separated the instruments and vocals incredibly well, and I could imagine the group on stage playing just for me. Brass Monkey by the Beastie Boys, and Morning by Beck were used to test the bass capacity of the Freedom buds, and they performed extremely well. Those two songs have incredible amounts of bass, and can sound annoying on headphones with too much emphasis on the low end. But the Freedom buds separated all of the low range cleanly and ultimately sounded as good as anything I have listened to wirelessly.

Overall, sound quality is top notch and covers a wide range of music.

Within the MySound app, you can also see exactly how much power you have stored in the buds. That’s extremely nice to have as the last thing you want in the middle of your workout is to run out of power. Nothing gets you out of your groove when lifting weights or running when your music cuts out. Jaybird advertises four hours of usage on a single charge, yet I managed to get 5-6 hours on a regular basis. When I did run out of power, I simply connected the included charging cradle, and got another 5-6 hours without connecting it to a wired microUSB cable. I got through a full week of use without actually needing to charge the Freedom buds from a wall outlet. 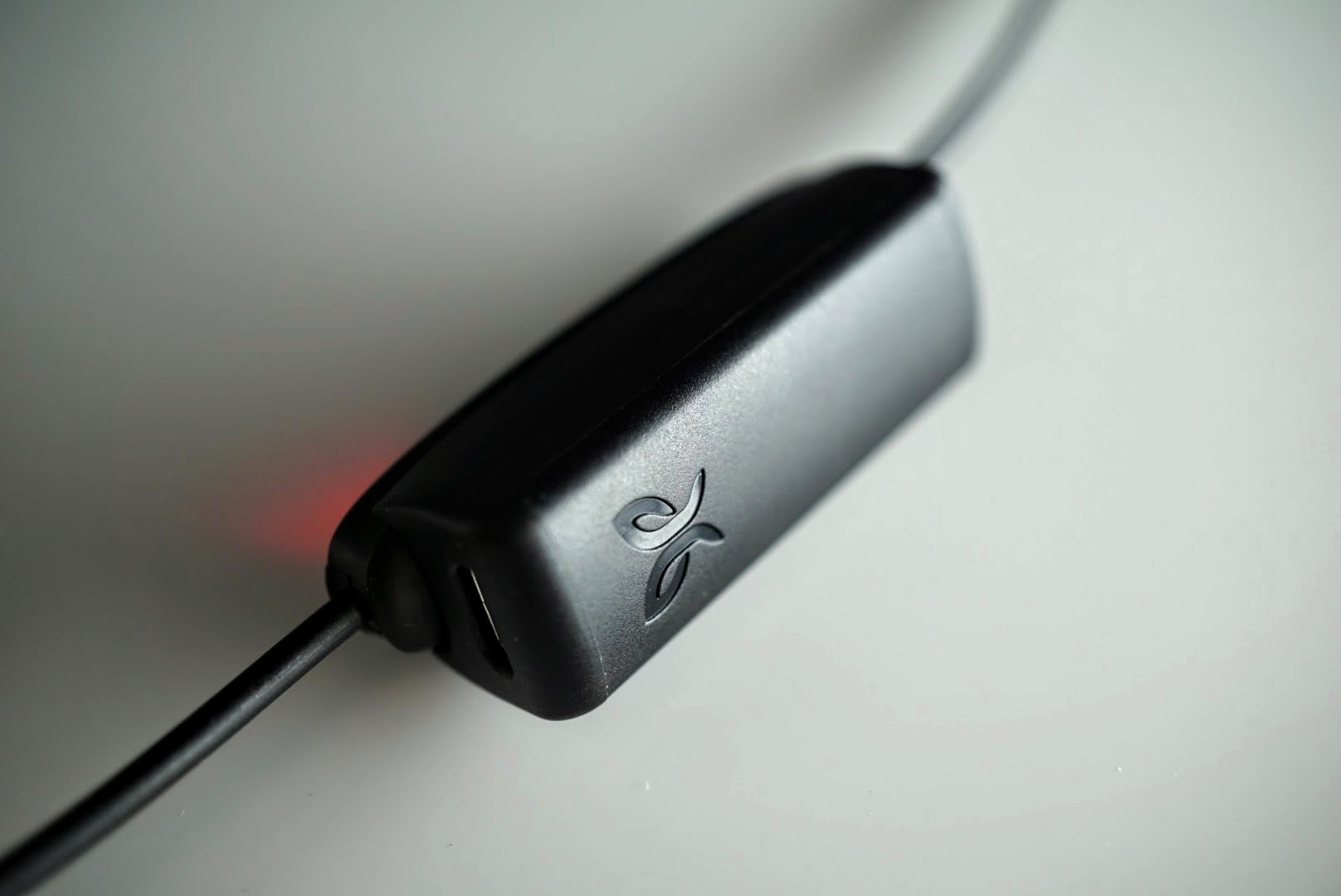 One last nice feature is the great call quality I got with the Freedom buds. I usually call my parents at night when I go for a walk with my dog. On the walk there are usually cars and wind I have to deal with, but none of those sounds came through on the other end of the call. The Bluetooth connection the Freedom buds have with my S7 edge is extremely strong. The only time they cut out on me are when I left my phone in the office and I left the house.

The Freedom buds have set a new bar for its small size, top notch sound quality, and excellent battery life. 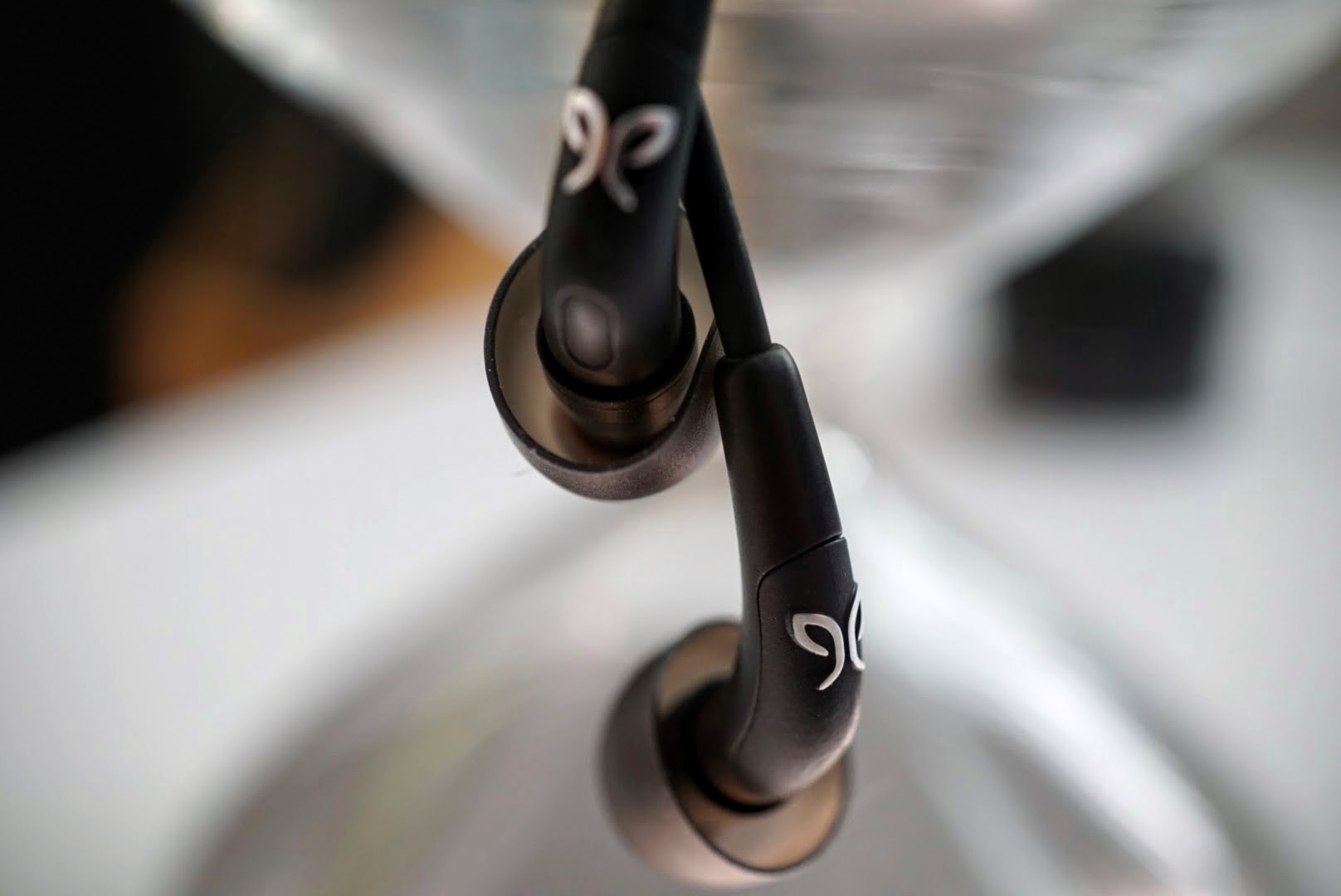 When technology makes advances like this it totally geeks me out. There’s maybe one or two times a year where mobile products make changes so dramatically that they set the standard for the competition. Jaybird did just that with the Freedom buds.

The incredible build quality, small size, great battery life, and excellent sound reproduction don’t come cheap with a price tag of $199.95. Yet if you want to free yourselves from wires, you will not find a better set of earbuds than the Jaybird Freedom Wireless buds.

Get the MySound app from the Google Play Store here.

You can purchase the Jaybird Freedom Wireless buds exclusively through Best Buy, BestBuy.com or at Jaybirdsport.com. They come in four colors, Gold, Carbon (Black), Blaze (Red), and Ocean (Blue).

Edit: You can now get the Freedom’s from Amazon.com too.

What is Google Fast Pair?

Jaybird X4 Review: Has the king of Bluetooth headphones returned?