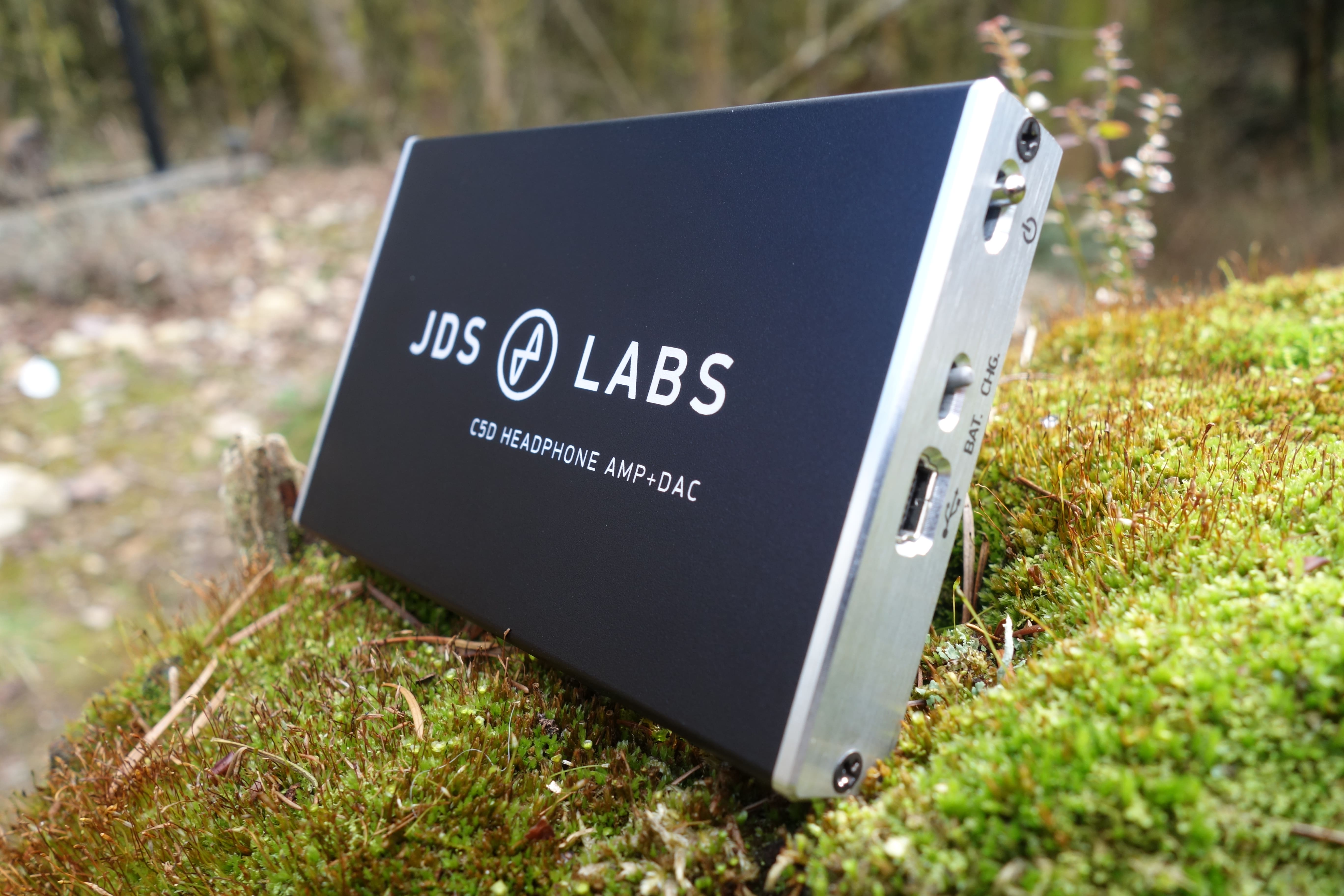 JDS Labs is one of those manufacturers that are fantastic at what they do, but don’t have to boast. It has its fans for the right reasons, by pumping out solid devices that accept nothing less than a considerable standard.

The company is most known by its successful Objective desktop DAC (or ODAC). It brought very accurate, “reference” sound that audio lovers ate up, and at a very reasonable price for the performance. Since great audio is going mobile, it was only a matter of time before JDS Labs jumped on the bandwagon and launched a portable solution. Let me introduce the C5D DAC. 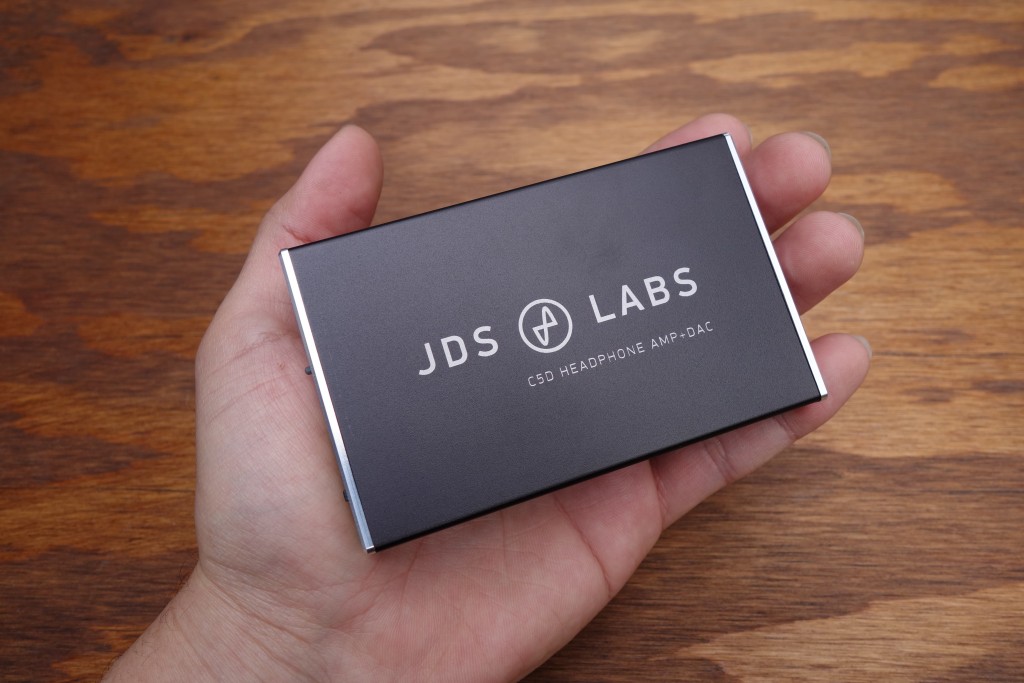 JDS Labs has shrunk down its components and stuffed in a battery. But did it compromise audio quality for the sake of portability? Let’s find out.

The C5D comes in a small, inconspicuous box. All you’ll find inside is the unit and a mini-USB to USB cable. 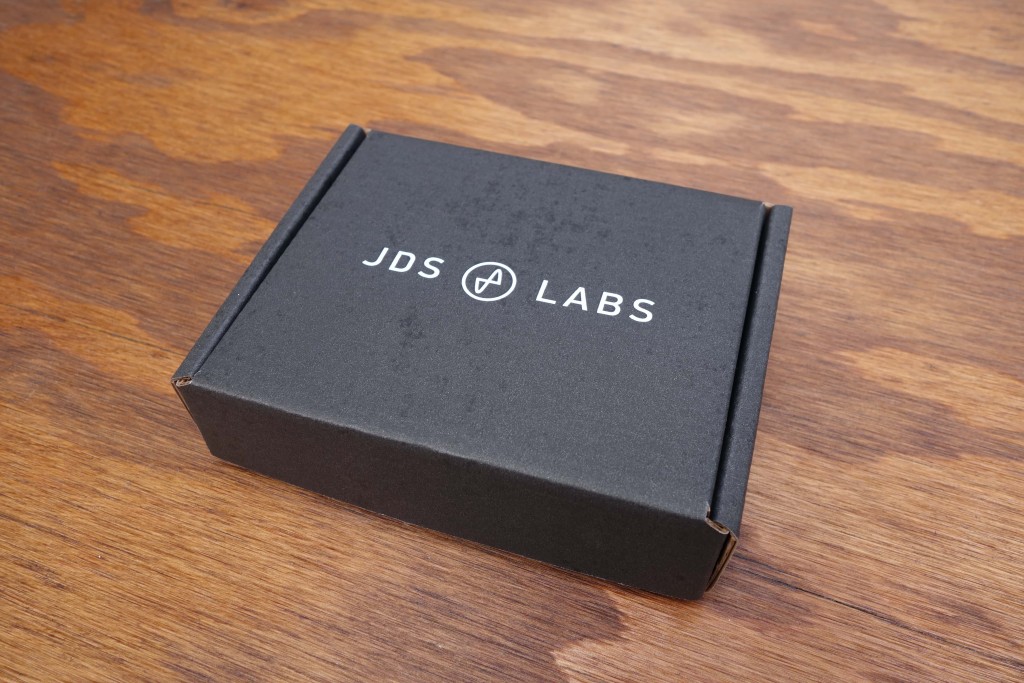 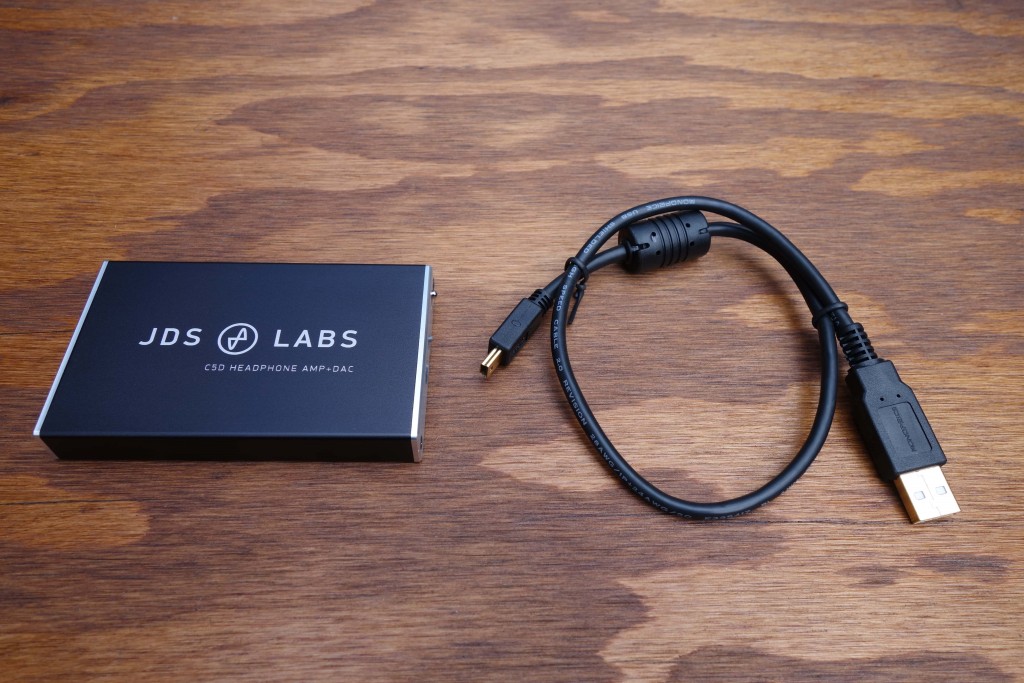 The metal casing feels very industrial. There’s a smooth, black finish on most of the chassis, with the exception of exposed, raw metal on the sides. 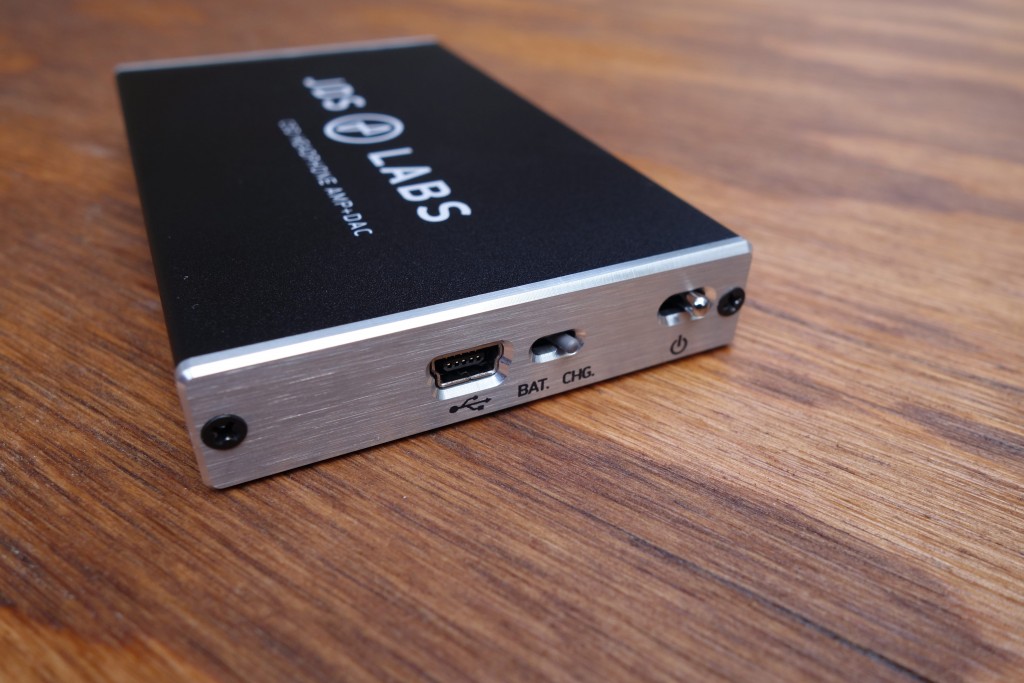 On the right side, you have a mini-USB port for the digital audio input, switch for power from either the built-in battery or connected device, and on/off power switch. 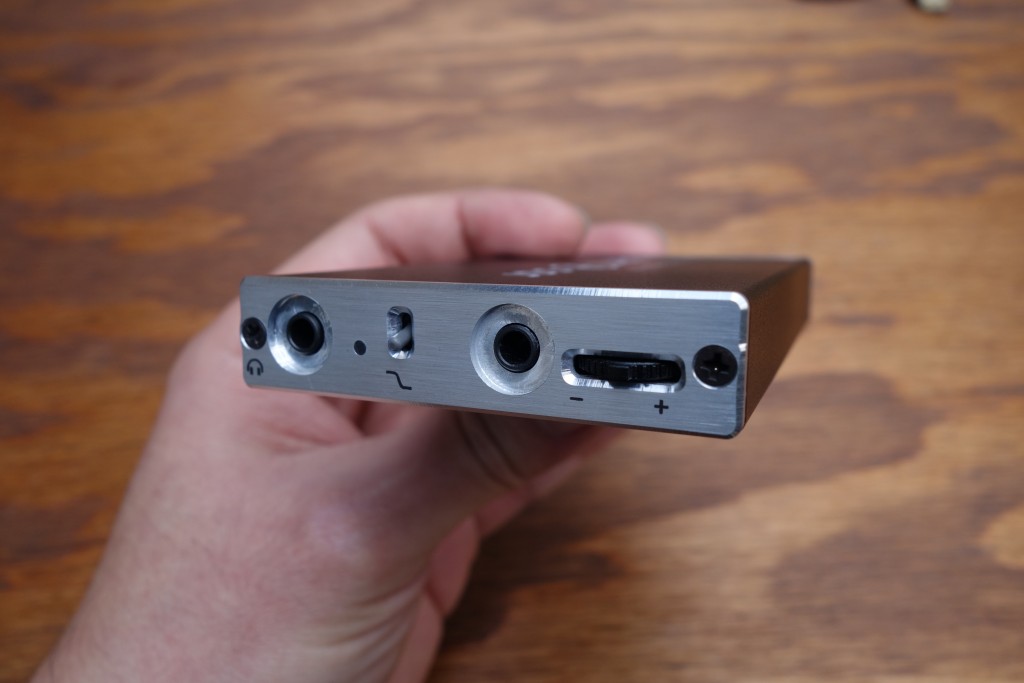 There is also an LED light, located between the headphone jack and bass switch. It uses green and blue colors for indications: green for when unit is on, flashing green when low on battery, and blue when charging.

The nice thing about portable DACs these days is that they can interface with Android, via OTG audio out from the charging port of the phone or tablet. That means that you can use your mobile device as the digital music source and pass the audio processing to the DAC. That then means that you can have a HiFi audio system while you’re out and about.

A bad part about the C5D’s packaging is that the micro-USB to mini-USB cable isn’t included. Fortunately, they’re not expensive, but you’ll need to buy one before your awesome portable HiFi setup is ready to go.

An important tip: make sure that you set the DAC to operate in battery mode when connected to a mobile device, or it will draw power from it. The C5D has its own battery, and speaking of which, the 1,200 mAh capacity is rated for 6-8 hours of playback (depending on volume level).

Interestingly, the volume control is digital, rather than a conventional analog knob or wheel. You push a notch left or right to decrease or increase the volume by fine steps, respectively. Considerately, JDS Labs put in the ability to hold it down to continually go in one direction (so you don’t have to sit there pressing it a million times). Oh, and something I didn’t discover until some time is that gain can also be controlled by the volume switch. If you push it in, it changes the gain between low and high. Moral of the story: read the manual!

The C5D doesn’t have much in the way of audio features, but there is a bass booster. It’s pretty simple to use (once you know the positions); there’s three options. The upper position is no bass boost, the lower position is medium bass, and the middle position is high bass. 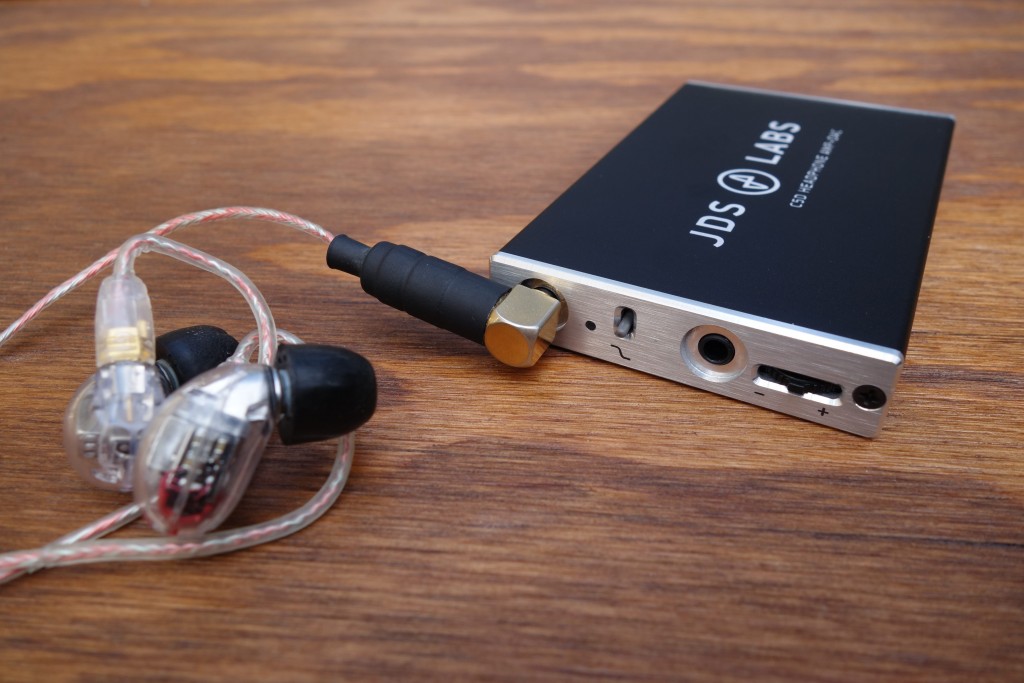 I had a high expectations for the C5D upon first hearing about it. So I reached to JDS Labs for a chance to try it and they were nice enough to loan us a unit. And I was happily not disappointed from the first listen. It’s such a clean sound. Clean and crisp.

I can hear that “reference” sound that JDS Labs aims for. The sound signature is balanced and you can tell that accuracy was a huge focus. Vocals sound natural and notes have a detailed extension. The imaging of different sounds within the perceived space is just a pleasure; they really convey a 3D space around your head. It’s fabulous that I can talk about the audio quality in terms of the sound detail as much as the depth…from a compact DAC.

I want to also say that although the C5D strives to be true to the music, it’s not done so in a boring way. The overall sound is full and notes are impactful. That said, I can imagine where the bass would not enough for bass-lovers. As I mentioned before, JDS Labs thought about that, with a bass booster switch. The bass boost mostly amplifies mid-bass. So if you have headphones that are shy in that region, it will help out. If you have headphones with strong mid-bass (I happen to have a pair of SE846 that fit the bill), the boost can get out of control. I found the medium setting to be a good oomph when I was in the mood, but the high bass setting boomed its way in front of the spectrum.

I can nitpick and say that the C5D is a little on the warm side. That is, the treble emphasis is just short of the level that I think it should be. That could be a minor concern to folks who like a brighter sound.

You can probably guess that the C5D left me impressed. The quality pushes past its size, and I would say that it represents the company’s passion for excellent sound. If you’re looking for a portable, compact DAC solution, I’m convinced that this one is among the best that you can buy right now.

The C5D retails for $249 and comes in either black or red colors. 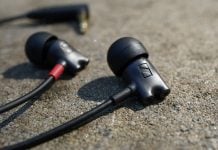 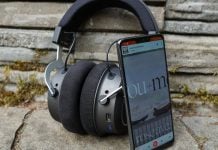