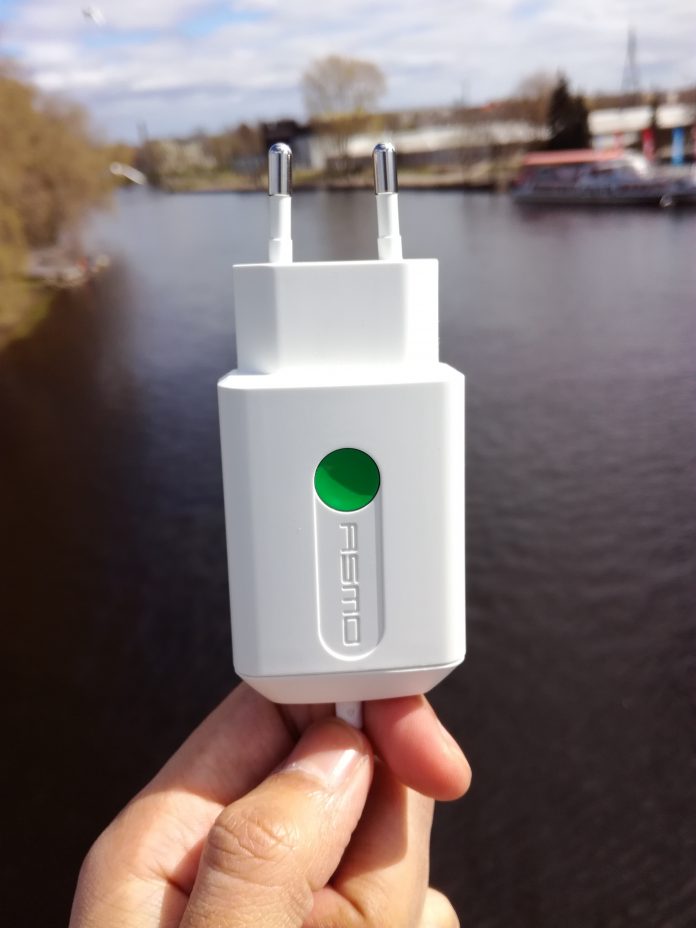 If I would run a poll asking how many of you leave their chargers plugged to the outlet after your charging duties are done, I’m pretty sure I would get a pretty high number. It’s such a common thing to do that you probably don’t think about it that much.

However, there has been multiple accidents throughout the world caused by careless charging practices. Most of them occur while charging phones during the night, but there have also been cases in which a seemingly harmless charger connected to an outlet has caused big consequences.

This is the case of Asmo Saloranta, creator of the ASMO charger. His fiancée’s house suffered severe damage thanks to a charger that was left plugged into a power outlet. So, what’s the idea? Very simple: when you plug your ASMO charger to the outlet and connect your phone, it turns on. When you unplug it, it turns off. Sounds simple? That’s because it is. This charger does not aim to reinvent the charging experience (which is something kind of hard to do anyways). It tries to let you do exactly what you’re doing right now, but in a more secure way.

I never figured out why don’t we all have the same plugs and voltages all over the world. For being the only intelligent species on the Earth, we are such a mess regarding basic stuff. Anyways, ASMO charger tries to get around this fact by providing a universal voltage charger.

There are two things that are notably absent from this charger. The first one is the ability to charge a device with Qualcomm’s Quick Charge capabilities. The other one is the lack of a USB Type-C option. For now, only microUSB phones are supported. Also, because ASMO Solutions, the company behind the charger, is based in the lovely country of Finland, the plug is tailored to European markets. However, there are plans to remedy two of these shortcomings, but more on that later.

Packaging for the ASMO Charger is very interesting because it has a huge “Stay Safe” label at the front. It really gets the message across in an impactful way. Contrary to such a high amount of chargers and accessories these days, especially from American brands, ASMO Charger’s packaging is made fully of cardboard, so it is not as harmful to the environment and easily recyclable.

When taking the white charger out of its package, you can clearly feel that a lot of attention has been put to deliver a high-quality product. This is especially true for the cable, which is so much better than the pitiful chargers that OEMs usually ship with their devices. It is not as thick as, for example, Anker’s nylon cables, but this is a cable that will probably last you for years. If you don’t believe me, then believe ASMO, since it offers a five-year warranty on the device.

The cable is fully attached to the charger itself. It’s not like chargers these days that have a USB plug, and you connect a cable to it. There are benefits and disadvantages to this, but, because of the nature of the charger, it was probably made this way to provide more security.

So how does it work? Plug in your device and if it supports USB On-The-Go (commonly referred as OTG), it will detect it automatically and turn itself on. If your device does not support USB OTG, then the charger has a green button that will turn on the charger manually. It is very easy to determine if the device is actually on or off because it makes a click sound on both occurrences.

Unfortunately for me, my Honor 7 Lite (called Huawei Honor 5C in other markets) does not support USB OTG, so I had to turn on the charger each time. Once I forgot to turn it on, but when I remembered my mistake, it was already too late: I had to leave my place with an almost discharged phone. The horror.

I have an LG G Pad 8.3 laying around though (sorry, Android on tablets is just not up to par to iOS on the iPad), so I could test this and it works flawlessly. As soon as I plug in my tablet, the charger clicks and starts charging.

Upon unplugging any device, the charger takes approximately 3 seconds to turn itself off. A click will make sure that your flat is safe and that the house lady won’t have to enter your room because the fire alarm went off.

Charging my devices with the ASMO Charger took the same amount of time than using its unsafe, non-clicking counterparts, so the added security layer does not create a slower charger. On a small side note, I found the microUSB plug to be just a bit on the bigger side, which sometimes causes some very minor clashes with my phone’s protection case. Not a big deal, though.

What’s next for the ASMO Charger?

Even though they have a solid product right now, ASMO Solutions is already thinking about the future. I was in contact with an ASMO Solutions rep, and she was eager to explain the company’s upcoming plans.

With the dawn of the USB Type-C era, fuelled by the launch of the Samsung Galaxy S8, accessories companies have to embrace the new standard in order to stay relevant. ASMO is aware of this, so they have a roadmap for developing a Type-C solution in Fall of this year. As more and more phone incorporate this plug, it is imperative companies start working on it.

The other shortcoming that ASMO is already working on is in offering a charger with a Type A socket (the one used in the United States, Canada, and almost all countries in Latin America). Sure, you can use an adapter right now and it will work well, but it’s much better to have a native solution and not deal with workarounds. This would also be introduced in Fall 2017.

Other products in their vision deal with laptops. Two things that are always plugged into a socket when not in use: a phone charger and a laptop charger. It makes sense, then, to bring to the market solutions for laptops as well.

Conclusion and where to buy

There’s small stuff that you do every day that might be dangerous in the long run but you keep doing it anyways. One of these bad habits is leaving your charger connected all the time, which, not only adds up some cents to your electric bill but also can become a fire hazard under some circumstances.

Sure, this is not something that happens every day, but why should you risk it? And come on, you won’t ever start to unplug your charger.

Now, the weakest point of the ASMO Charger is its price. At €49.95, it is not exactly a cheap device. The quality and the safeness aspect make up for some of the price, but it is still a fairly expensive accessory.

However, thanks to a collaboration with ASMO Solutions, you can now use the code androidguys on their website and you will get a whopping 40% discount and free shipping! This eliminates my biggest gripe with ASMO Chargers and makes it an even more competitive product.

If you want to learn more about the device itself and take advantage of this offer, you can head over to Asmo Solution’s website and order yours today. You can also check the (successful) Indiegogo campaign to see how the charger came to be.