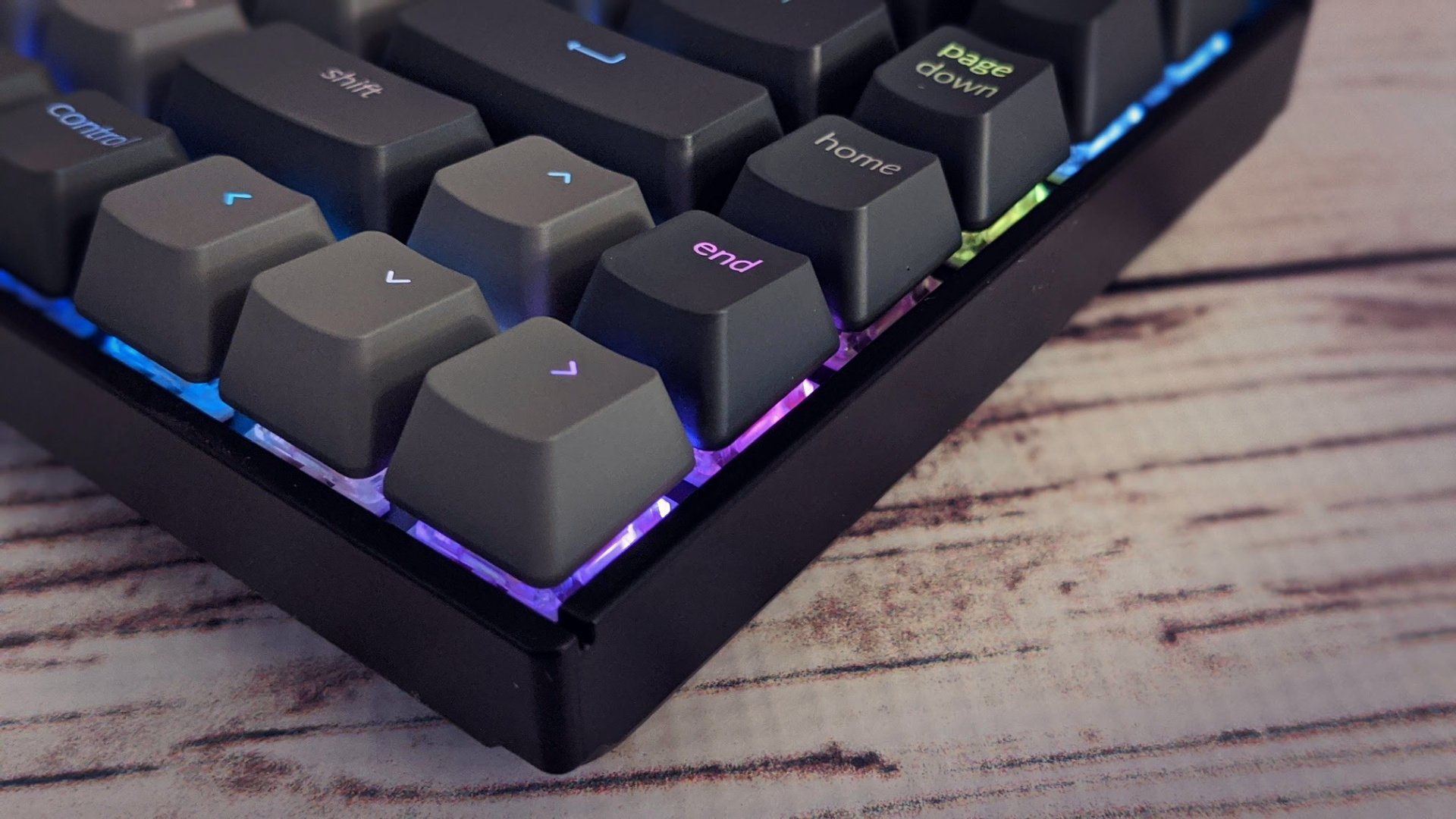 While we love to chat about phones there are some people who find keyboards to be an interesting topic of discussion. We’re starting to understand why.

Casual users tend to think that most computer keyboards are the same. Plugged in via USB, they’re often black or dark grey and have the same layout. They tend to have the same clickety-clackety sounds and feedback. That’s hardly the case.

We’ve reviewed our share of keyboards over the years, all of which center around Bluetooth connectivity. Why? Because of tablets and phones, of course. It might not seem natural to pair a full size keyboard to a handset or tablet, but it’s a game changer in the area of convenience. 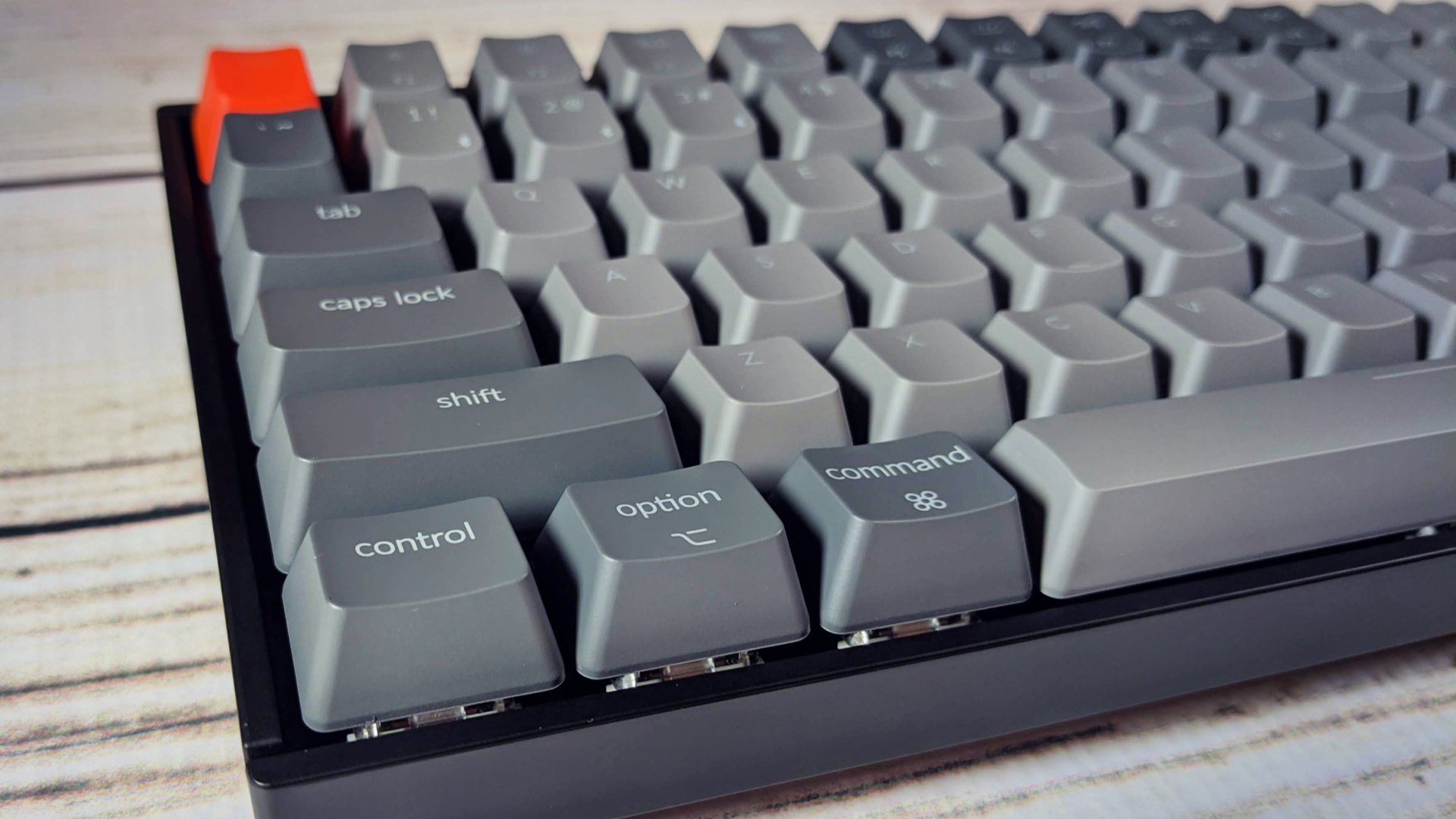 While some keyboards are thin, ultra-lightweight, and tuck away as nicely as a pad of paper, others are more traditional in size. There is certainly a case for portability and go-anywhere productivity. Other keyboards, like the Keychron K2, are built with other things in mind.

We were sent one of these keyboards to review and fell instantly in love with it. It’s the right size for both portability and efficient typing. Moreover, it’s mechanical and can be configured in various layouts. Oh, and it’s got really cool RGB lighting effects that literally change the way you look at your keyboard.

What does the Keychron K2 do?

It’s a keyboard, so its main function doesn’t really need to be explained. However, peeling a layer back, we learn it is designed with Bluetooth (wireless) and wired (USB) connectivity. It’s perfect for staying in one place and acting as the input for your main PC but it unplugs and fits in a bag without taking up much space. 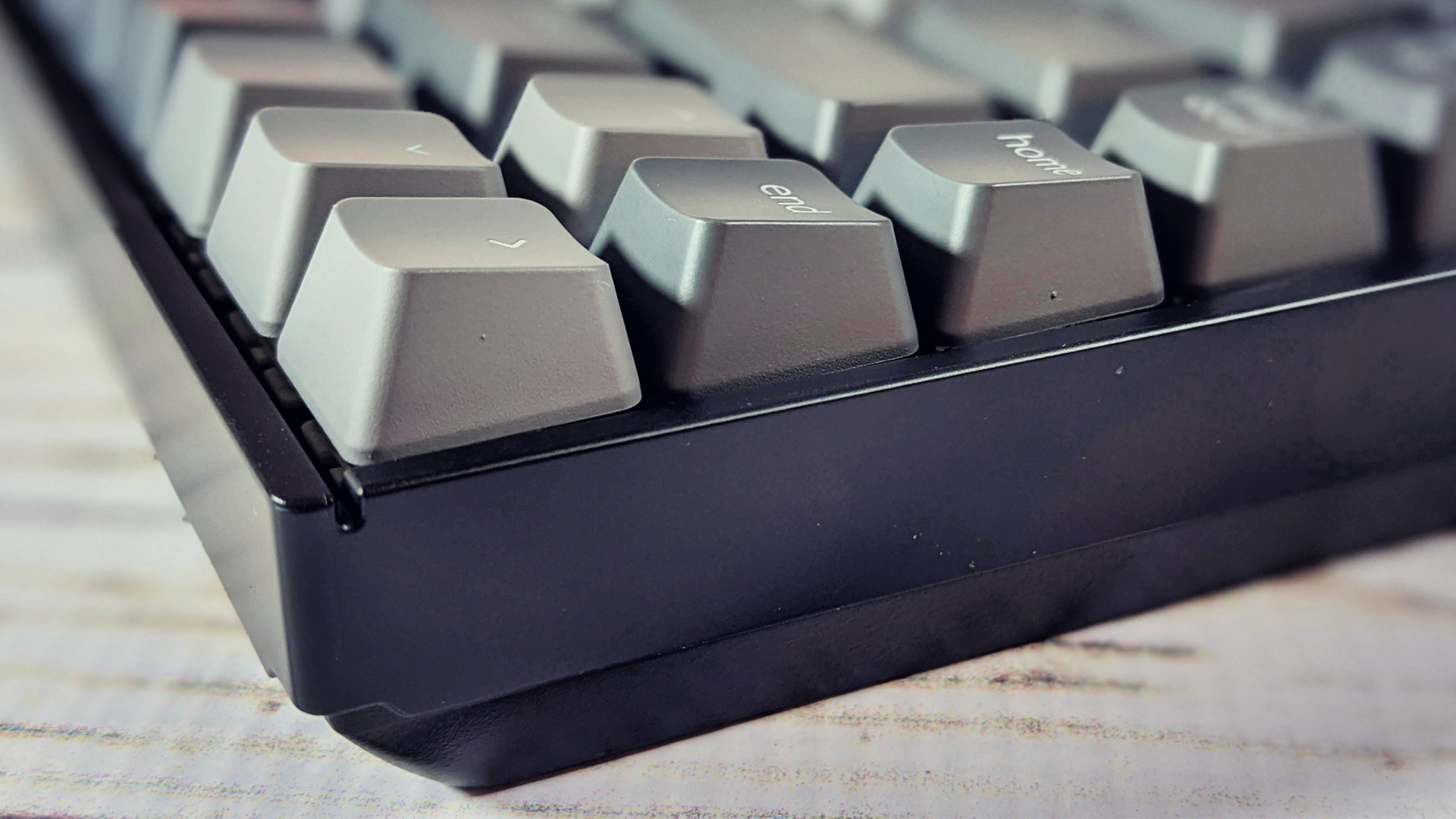 With 84 keys, it is compatible with Windows, Android, and Mac operating systems. Moreover, it has Gateron switches in blue, red, and brown with 15 of the keys designed for multimedia.

What else should I know about the Keychron K2?

There’s a 4,000mAh battery tucked inside the keyboard, which puts it considerably higher than many of its competitors. Reportedly, it provides up to 10 working hours with the LED blacklights active. We don’t use the lights at all times, but we’re finding we get upwards of 15 hours before we consider charging.

The Keychron K2 employs N-Key Rollover (NKRO) on wired mode which means it registers every key pressed, even if at same time. 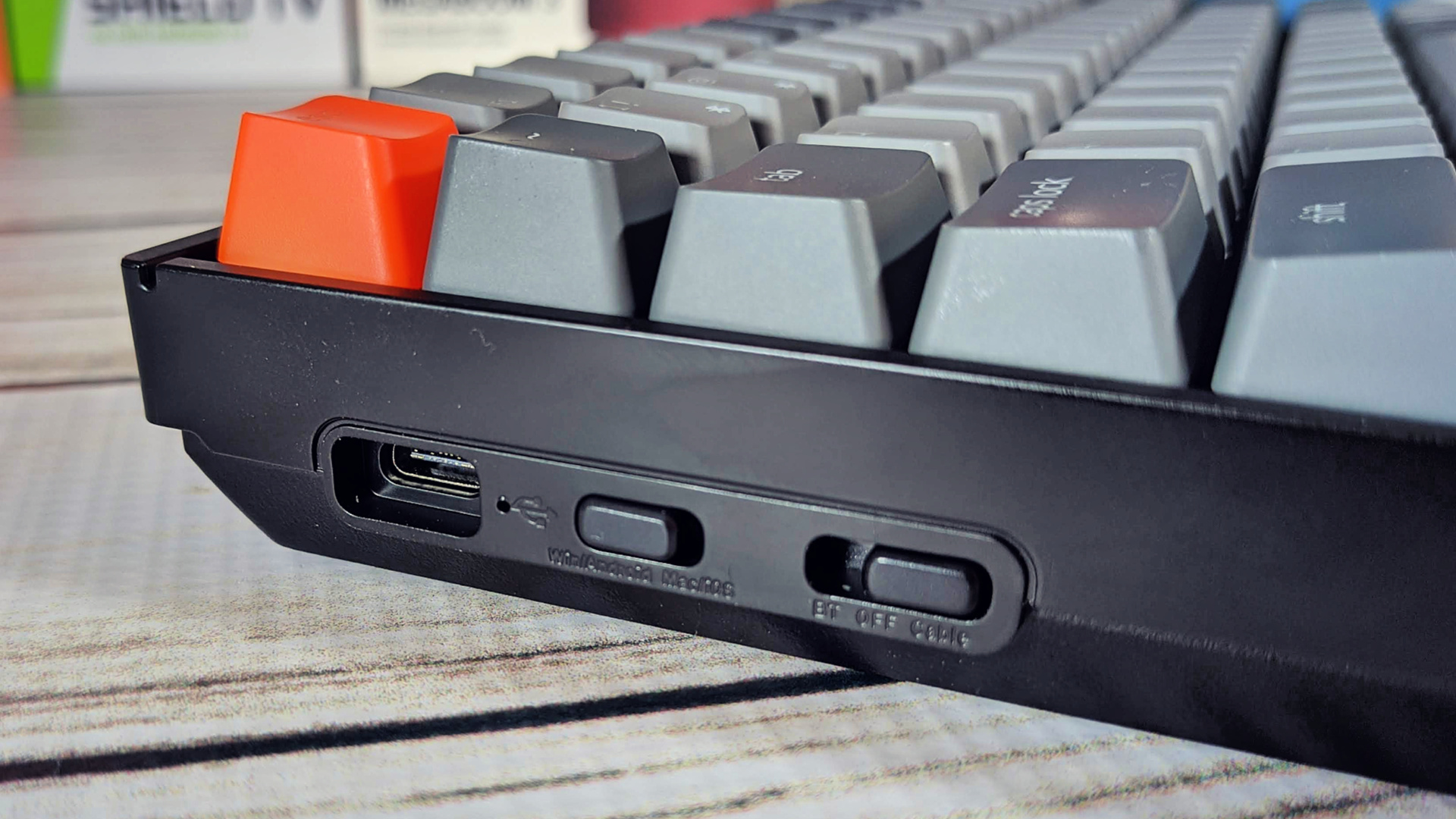 When it comes to wireless mode, you can connect up to three devices to the keyboard. This is handy if you split time between a dedicated office PC and a tablet. It eliminates the need to reset and re-pair every time you switch devices.

What is it like to use the Keychron K2?

Typing on the Keychron K2 is a delight. The curves are just right, wrapping ever so slightly to the tips of fingers. Response is exactly what we expected with the appropriate amount of feedback, clicking, and timing.

Adjusting the legs gives the keyboard a six-degree angle which makes more impact than it sounds. If you tend to prefer a thin, flat keyboard that barely rises from the table, this adjustment could prove aggravating or tiring to the back of hand and wrists. On the other hand, if you’re already using a mechanical keyboard or something with a slight slope, you’ll appreciate the angle. 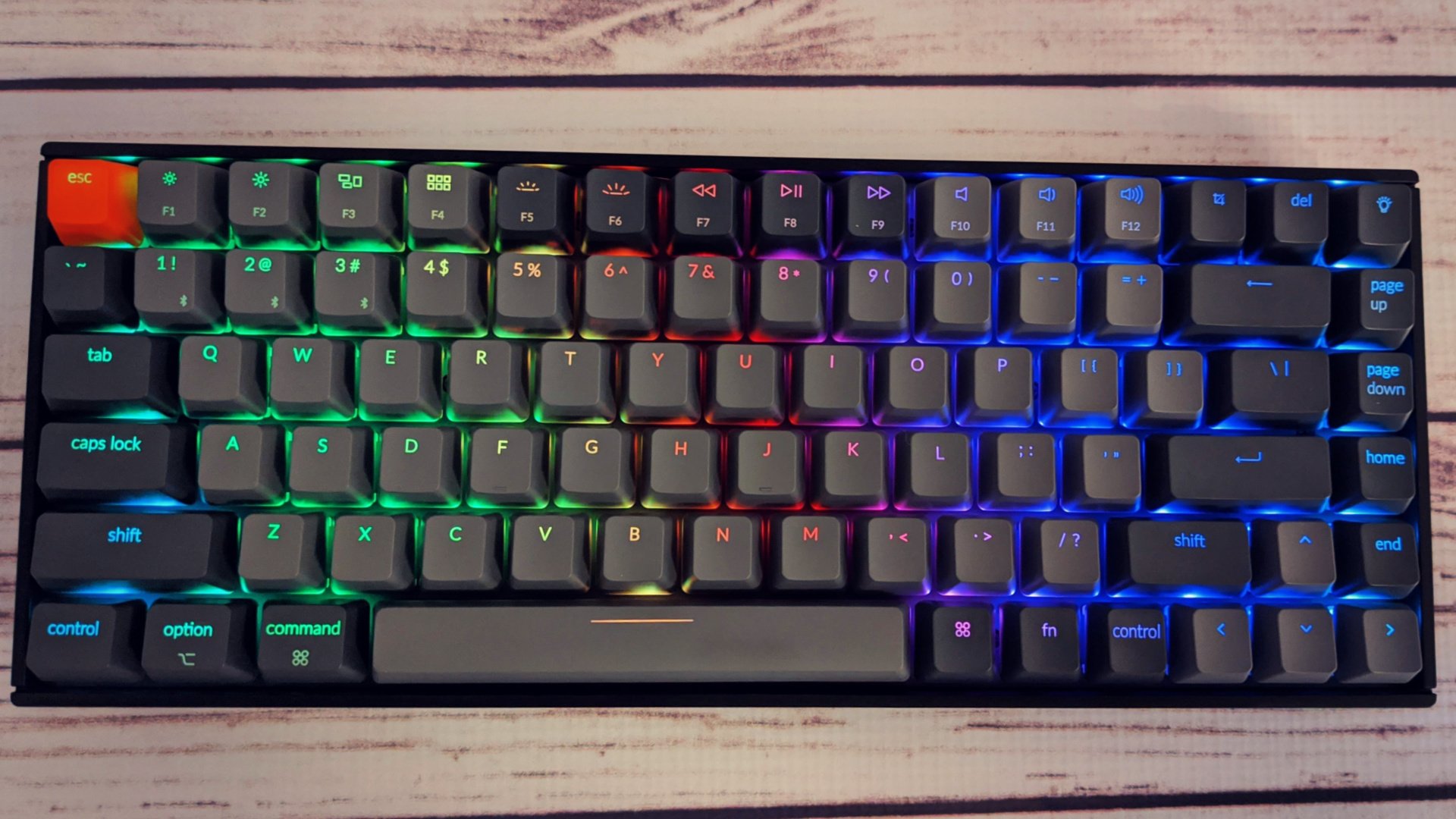 We reviewed the red keys which are supposed to be on the more quiet end of the spectrum. We chose this option as we spend more time typing than gaming and we’re quicker with this configuration. They’re certainly not silent and we can imagine switching to blue and brown makes for a more traditional typewriter click.

The lighting effects are downright cool and there are plenty of options to choose from. In fact, there are so many that the difference between some of them is minimal and tough to notice. That’s not to mention that you can adjust the actual colors, too.

Whether you like a flowing waterfall, cascading effect, or stuff that reacts to individual key presses, there’s an option or two. You’ll see the light effects better from above, but the glow does show up on the bottom edges of keys. It’s endlessly configurable and really cool. 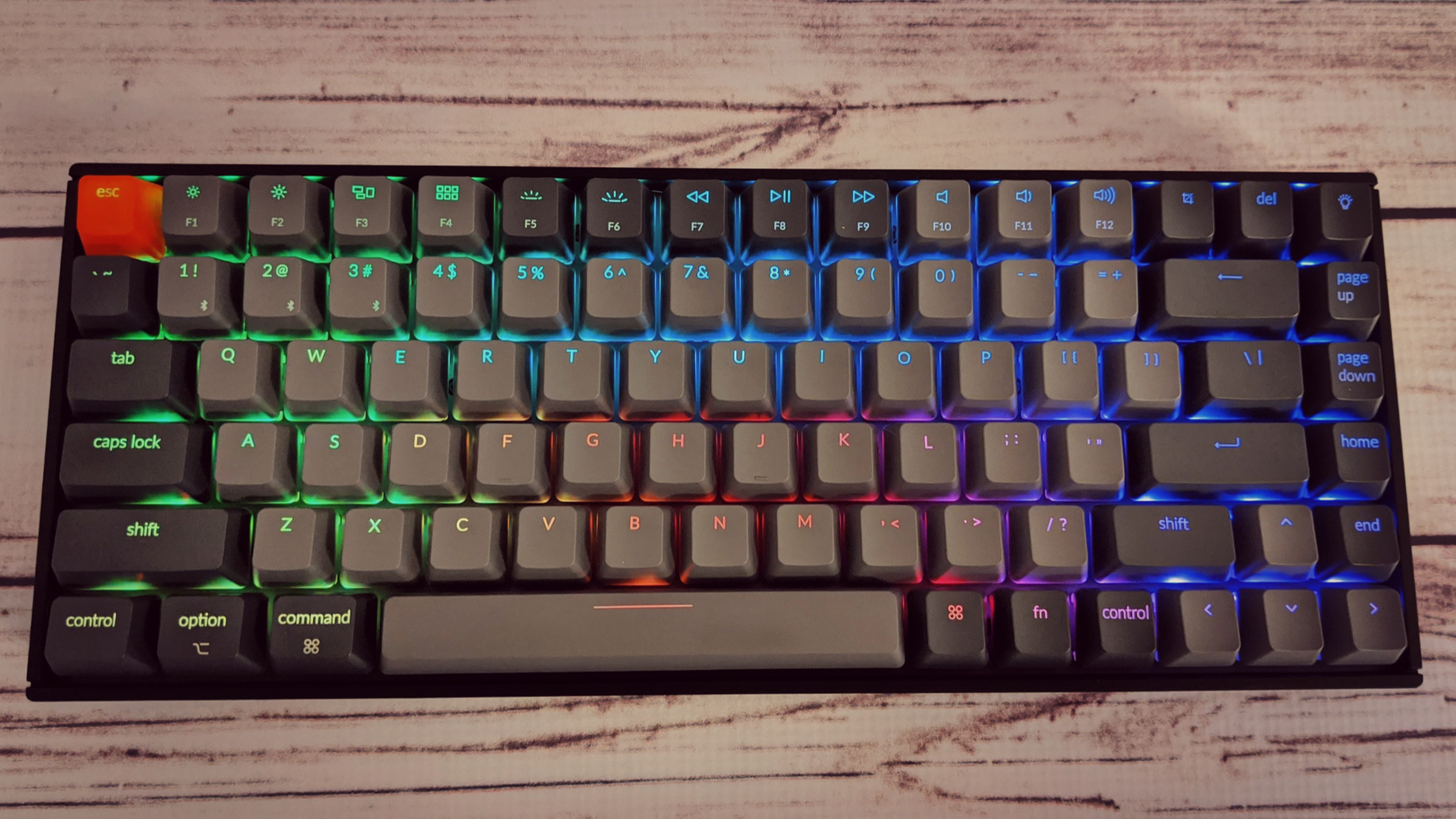 If you’re looking for a mechanical keyboard that’s solidly built and highly customizable, start here. If you’re on the hunt for a Bluetooth keyboard that looks really cool and pairs with a variety of operating systems, start here.

The aluminum frame adds a certain amount of heft to it so you’ll definitely feel it in backpack or bag. If you plan to tote yours around, know that it’s about the weight of a decent paperback book.

Generally speaking, the K2 is thick, somewhat taller, and calls to mind an old school typewriter. We suspect that description alone can help readers decide one way or another whether it’s worth pursuing.

You won’t want to take this to a coffee shop or library, even with the red keys. There’s enough sound generated that you would draw the ire of others. But, if you’ve got a dedicated office or game room, you’ll be pleased with the response and feedback. And if you’re a gamer, we imagine you’d love the tactile blue switches.

We’ve been very impressed with the Keychron K2 thus far, particularly with its battery. And when it is time to charge, we’re glad to see that it uses USB Type-C and takes very little time to replenish.

There are three options to choose from at Keychron’s website: White Backlight, RGB Backlight, and RGB Backlight with Aluminum Frame. Pricing is $74, $79, and $89, respectively. You can also purchase the Keychron K2 wireless keyboard at Amazon where it’s offered in different options.