What if a dashcam could not only record what is happening in front of or behind (with an optional rear view camera) your vehicle in real-time but also help you spot trouble down the road further than your eyes could see? That’s the claim the Lanmodo Vast Pro Night Vision Dashcam makes.

According to its crowdfunding/sales page, the Vast Pro camera allows drivers to see over 3x further than the vehicle’s high beam headlights alone. Add to that 24-hour vehicle monitoring similar to Tesla’s Sentry Mode and it appears to be a no-brainer deal for the current asking price of $229 (front view camera package). Let’s dig in to see if this camera lives up to its own hype. 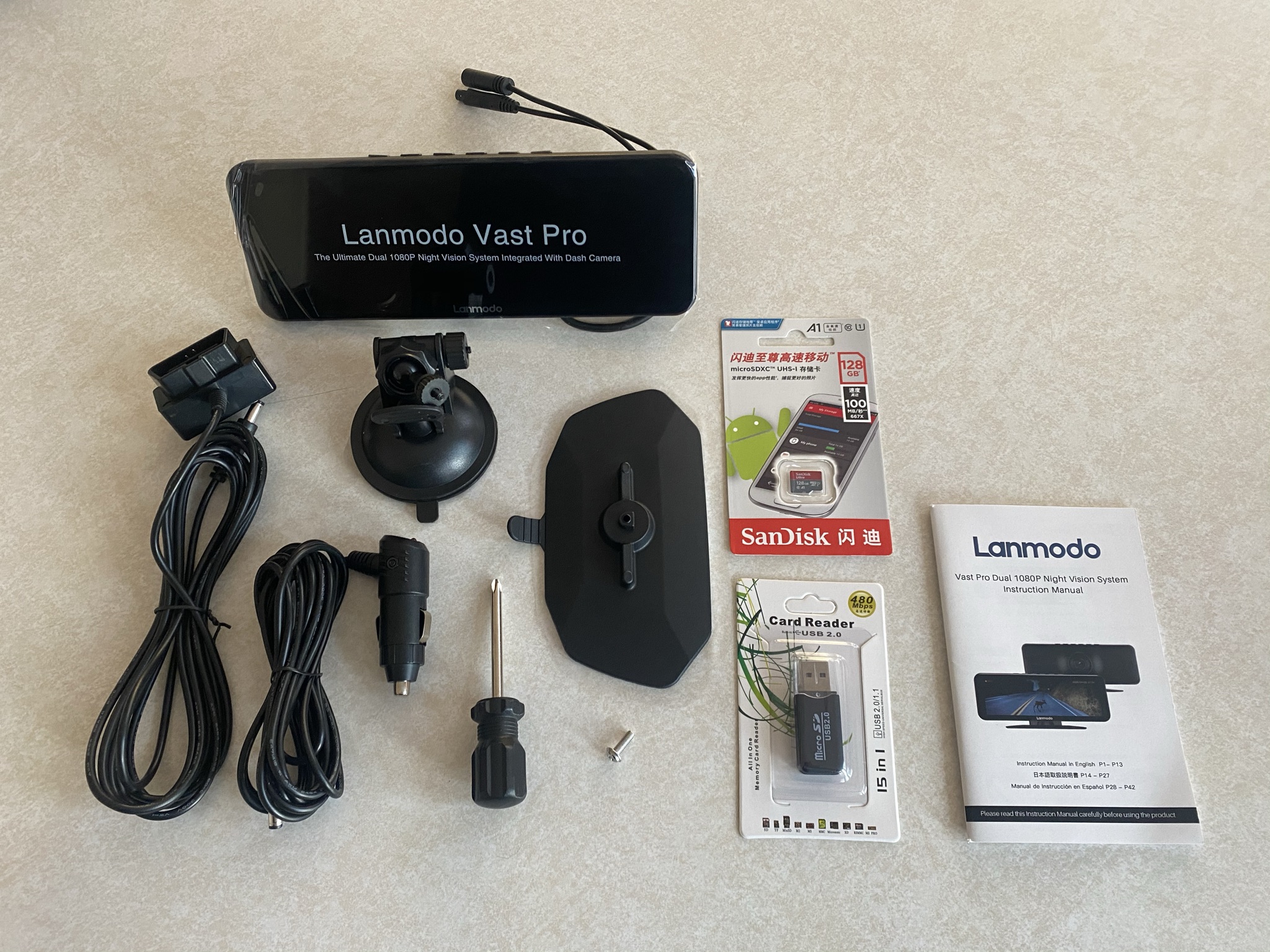 The Lanmodo Vast Pro features an 8” IPS wide 1920×1080 display screen which dominates the front of the device. Because it is not a touchscreen display, physical buttons are placed along the top of the Vast Pro. From left to right those buttons are: power (tap to for display, hold 3 seconds to power unit off), Signal switch (front or rear camera), scroll up, scroll down, and “OK.” 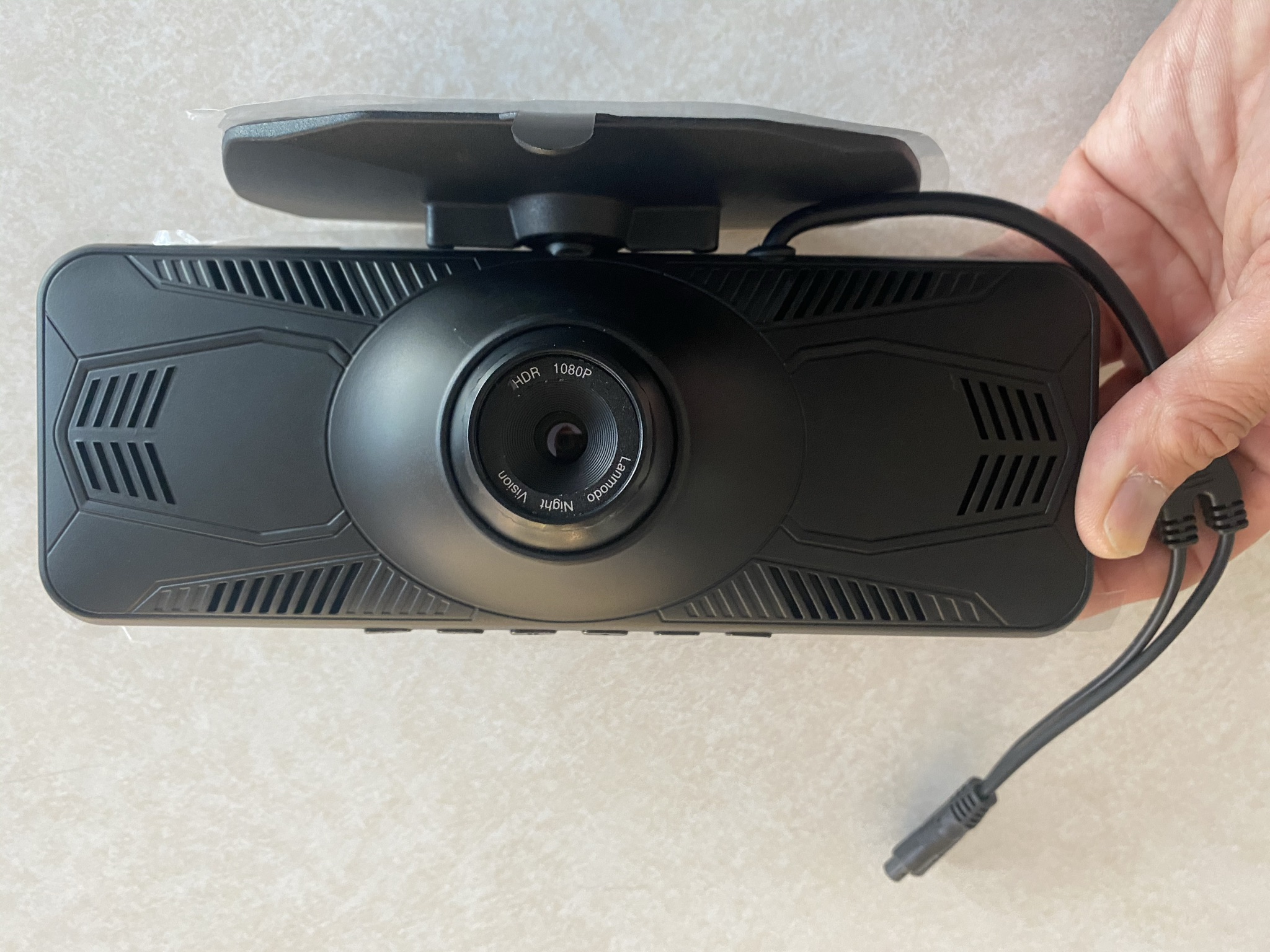 A micro-SD slot sits along the left bottom edge of the device. Also along the bottom edge is a pigtail wire for connecting to a 12V power source and rearview camera.

Tapping the “scroll up” button along the top brings up the on-screen menu.

Menu Settings are: (Defaults are bold)

Because the Vast Pro is not a touchscreen device, I really wished that button function would be displayed on-screen under its respective location when the menu is called up. Otherwise it is a guessing game to feel out the button location and hope that you are selecting the intended one. For a device that is supposed to aid in night time vision, I would say this is an oversight.

The Vast Pro comes with two different mount types. One for attaching to your windshield and the other is a stationary mount with “Nano Glue” to mount directly to your dash. 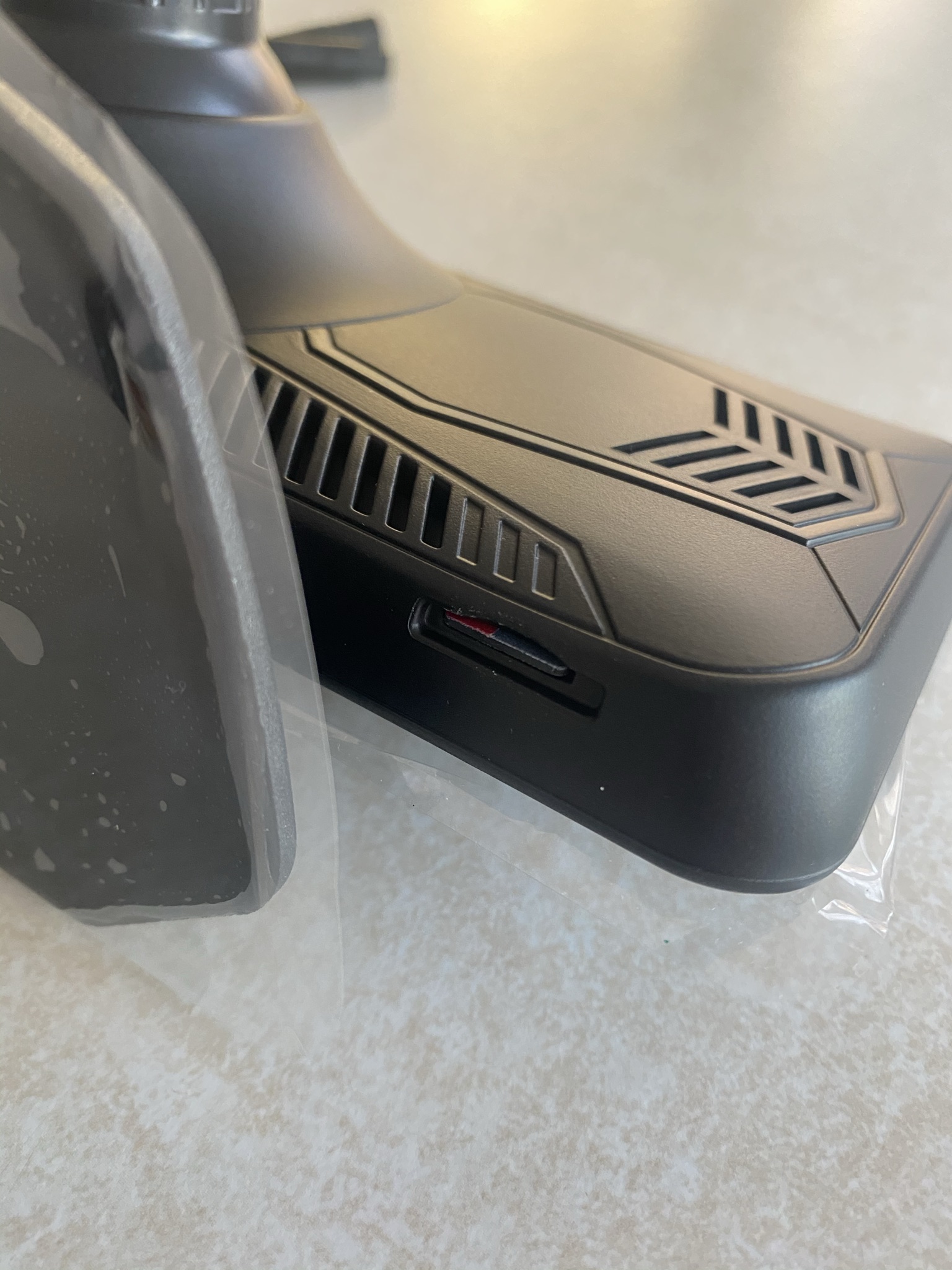 I chose the dash mount primarily due to my OCD realizing that the windshield mount would position the “Lanmodo” branding along the bottom edge of the device upside-down.

Installing the base was simple using the supplied screwdriver to remove a screw from the Vast Pro, attach base, and then putting the mounting screw back in place.

Once the chosen base is secured, the next decision is whether to connect to power using either the included cigarette lighter plug or OBD adapter cable. I chose the ODB cable for 24 hour recording as well as keeping my cigarette plug free for phone charging. It would have been nice if the cigarette lighter plug offered at least one USB charging port.

Upon removing the protective plastic from the bottom of the base, the Nano Glue holds the device securely in place. The camera lens allows for minimal adjustments to the recording angle. It takes a little bit of force to move and once in positioned, it doesn’t seem as it will go out of adjustment easily.

There was more than enough cable length to route from the middle of my dashboard to the OBD port. My only gripes with the installation are 1) the base does not allow for any adjustment of the display unit. Unless your dashboard is completely level, there will be a slight lean to your unit. Remember my OCD? 2) Cable guides weren’t included to hold the cable in place across my dashboard for a cleaner look. 3) The microSD port is positioned in a location that pretty much requires removing the Vast Pro from your dash in order to install or remove.

Upon starting my car, the Vast Pro powered on and displayed a warning that the card was not compatible and needed to be formatted. Since I was using a brand new Sandisk card provided with my test unit, I was surprised that it wasn’t properly formatted out-of-the-box. That said, I simply confirmed formatting and the card worked as expected within the unit itself. 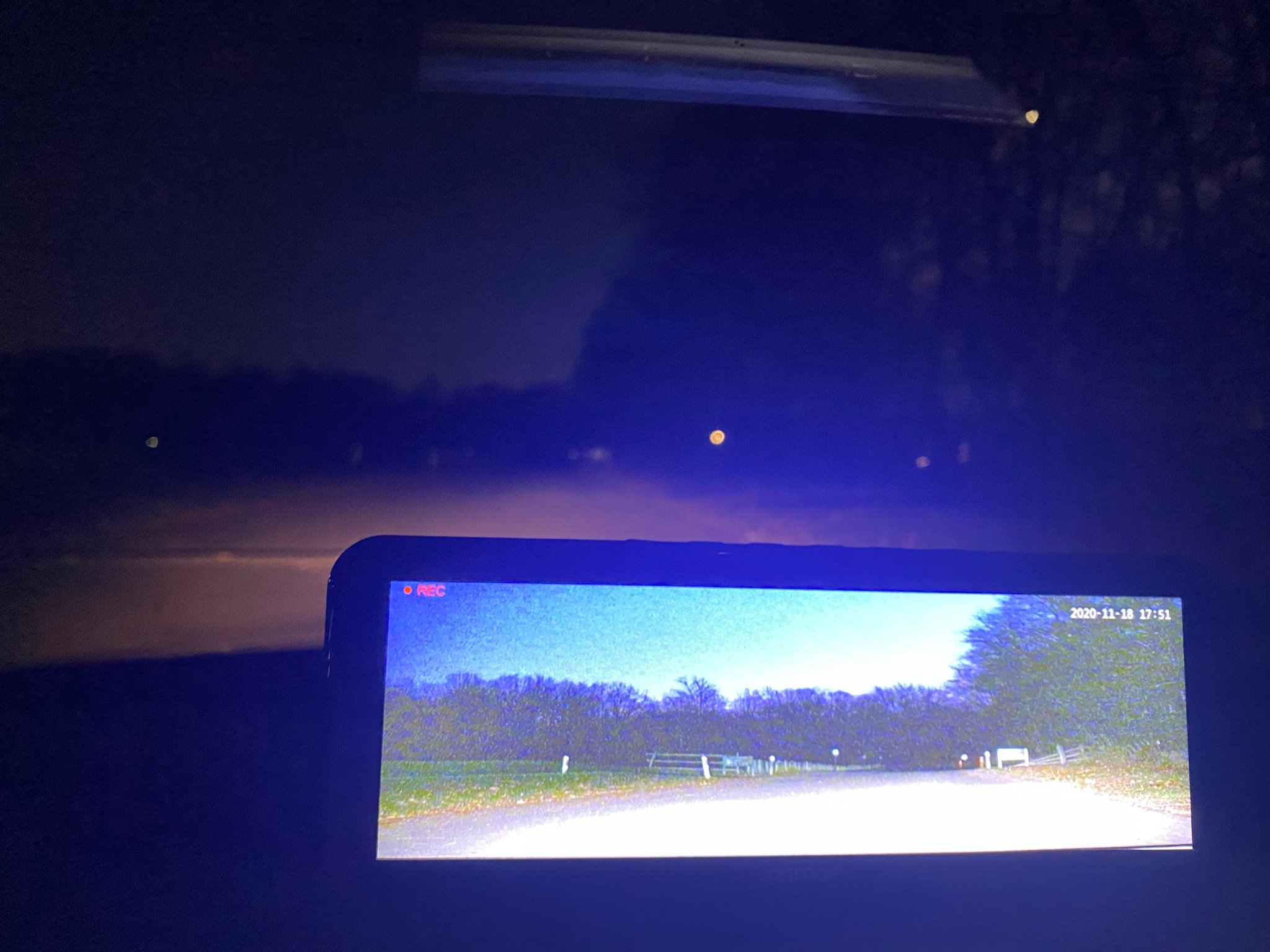 My first test drive was about one hour after sunset. It was basically pitch black because the moon had not yet risen above the horizon. My first observation of the Vast Pro is that the display is quite large and depending on your vehicle, how it is positioned in your field of view or even your height may affect how much of your view of the road it consumes.

My next observation is that the display is extremely bright. Even at its lowest setting, it was quite distracting for night time driving. Perhaps this is something I could get used to? Another observation while driving is that approaching headlights tends to wash out the display.

If you’re planning on using this for dashcam functionality, you may not capture the video evidence you are looking for as it will be blown out by the light amplification. Finally, the specifications indicate a frame rate of 25FPS but I think the actual frame rate varies depending on the amount of light available. As the road ahead gets darker, the frame rate drops to allow for more light amplification.

Once I arrived at my unlit alley connecting the high school and middle school parking lots, I put the car in park and tested with normal headlights, high beam headlights and no headlights.

As you can see in the photos, the Vast Pro does exactly as it claims and it honestly does it quite well. I tried navigating the alley without headlights and using the Vast Pro as my guide. Admittedly, I haven’t spent much time with it so I wasn’t very successful; I drove only about 100 yards and found myself fully in the left lane of a 2-way street upon turning my headlights back on.

While the playback of video seems to work fine on the Vast Pro itself, it is very cumbersome to sort through 28 hours of footage broken into 3 minute segments based on timestamps alone.

Unfortunately, files need to be copied from the included SD card to my computer in order to play because the data transfer rate is not sufficient to play directly from the card itself. Copying 128GB of data took over an hour. On top of that, my Windows 10 PC determines that the disk needs repaired every time I plugged the card in.

The repair appears to splice footage from one day to the next day. You’ll notice in the sample videos that about 23 seconds is appended to the three minute video segment.

The Lanmodo Vast Pro delivers on its promise to enhance nighttime visibility. While parked, I can definitely see much clearer detail and colors than  without using the Vast Pro. Lanmodo claims 300m or 984ft versus the 80m you’d get with high beam headlights. I didn’t measure the exact distance but based on my limited experience, I’d buy it plus or minus 50m.

The real question is whether or not it’s worth the current Indiegogo backing price of $229 US. The rearview camera is available separately for $49 or as part of a package for $258 saving you $20. You’ll want to add a 128GB microSD card (max capacity supported) if you don’t have one readily available. You can purchase that as an add-on along with a USB card reader for $19.

If you travel frequently on poorly or unlit roads, I can see where the Vast Pro could aid in spotting obstacles in the road sooner than relying on your headlights and vision alone. Fall season in Ohio typically means deer are actively rutting and as a result drivers need to be on alert for deer crossing over roadways.  Having a few hundred extra feet of visibility may save an insurance claim as well as an animal’s life. That alone may be worth the asking price.

It would be nice to see Lanmodo improve upon this system with some artificial intelligence for object recognition and provide audible or visual notifications when it spots objects on the roadway. This would allow the driver to focus on the road in front of them but know to slow down and view the Vast Pro when there may be something to steer around further up the road.

You can learn more about the Lanmodo Vast Pro at the manufacturer’s website as well as the Indiegogo crowdfunding page.