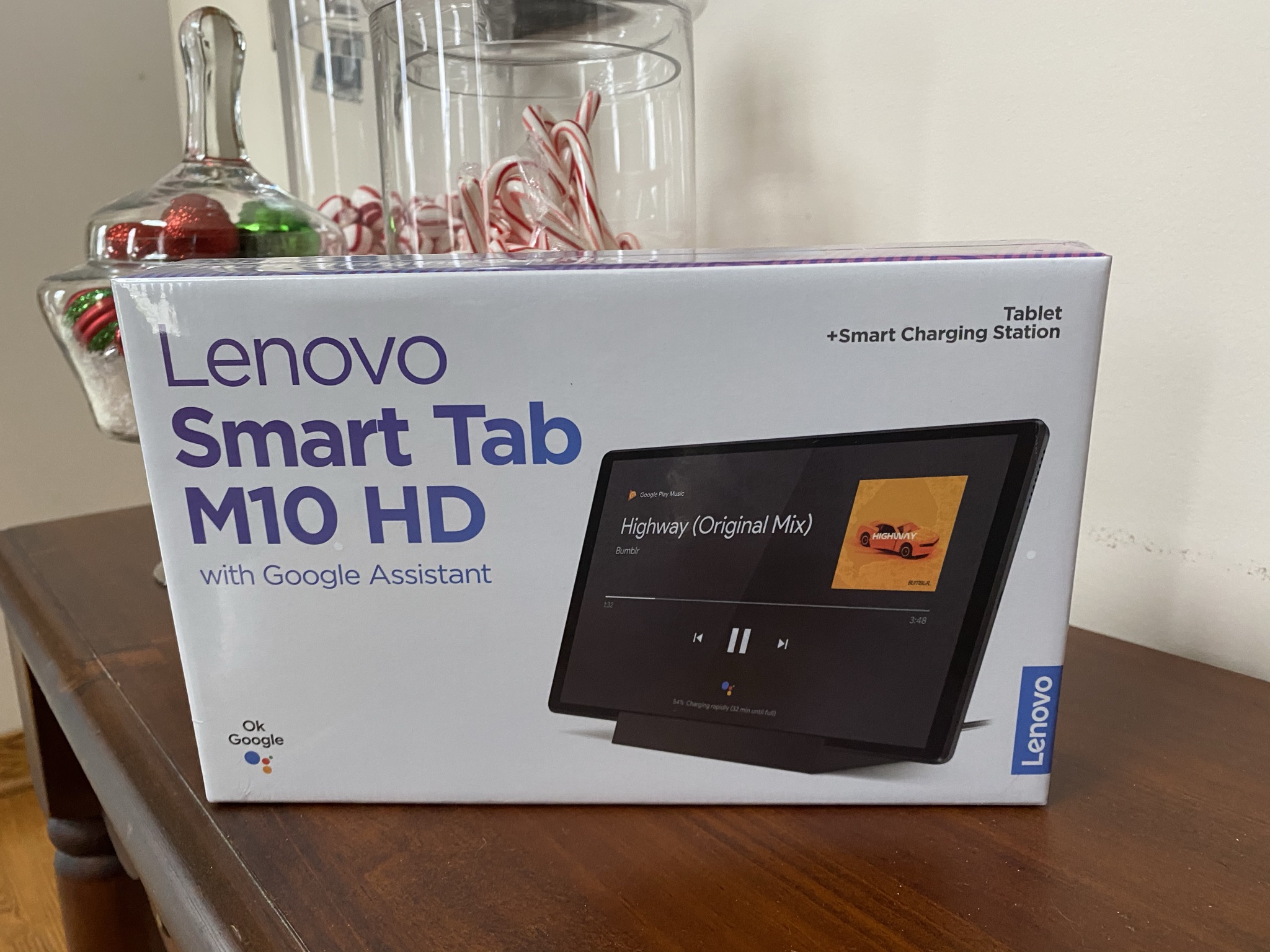 I haven’t purchased a 10” tablet since my 1st generation Apple iPad. I’ll add that I haven’t spent more than $100 on a tablet since buying the aforementioned tablet. Prior to receiving the Lenovo Smart Tab M10 HD (2nd Gen) with Google Assistant for review, I used, albeit sparingly, an Amazon Fire HD 8 tablet (7th Gen, 2017).

As laptops slimmed down and phones got bigger, the tablet market seemed to be the solution to nobody’s problem. While tablets can be great for content consumption, they just aren’t cut out for content creation in my opinion.

Retailing at only $130, does the Lenovo Smart Tab M10 HD offer enough to change my mind  about the tablet market in general? 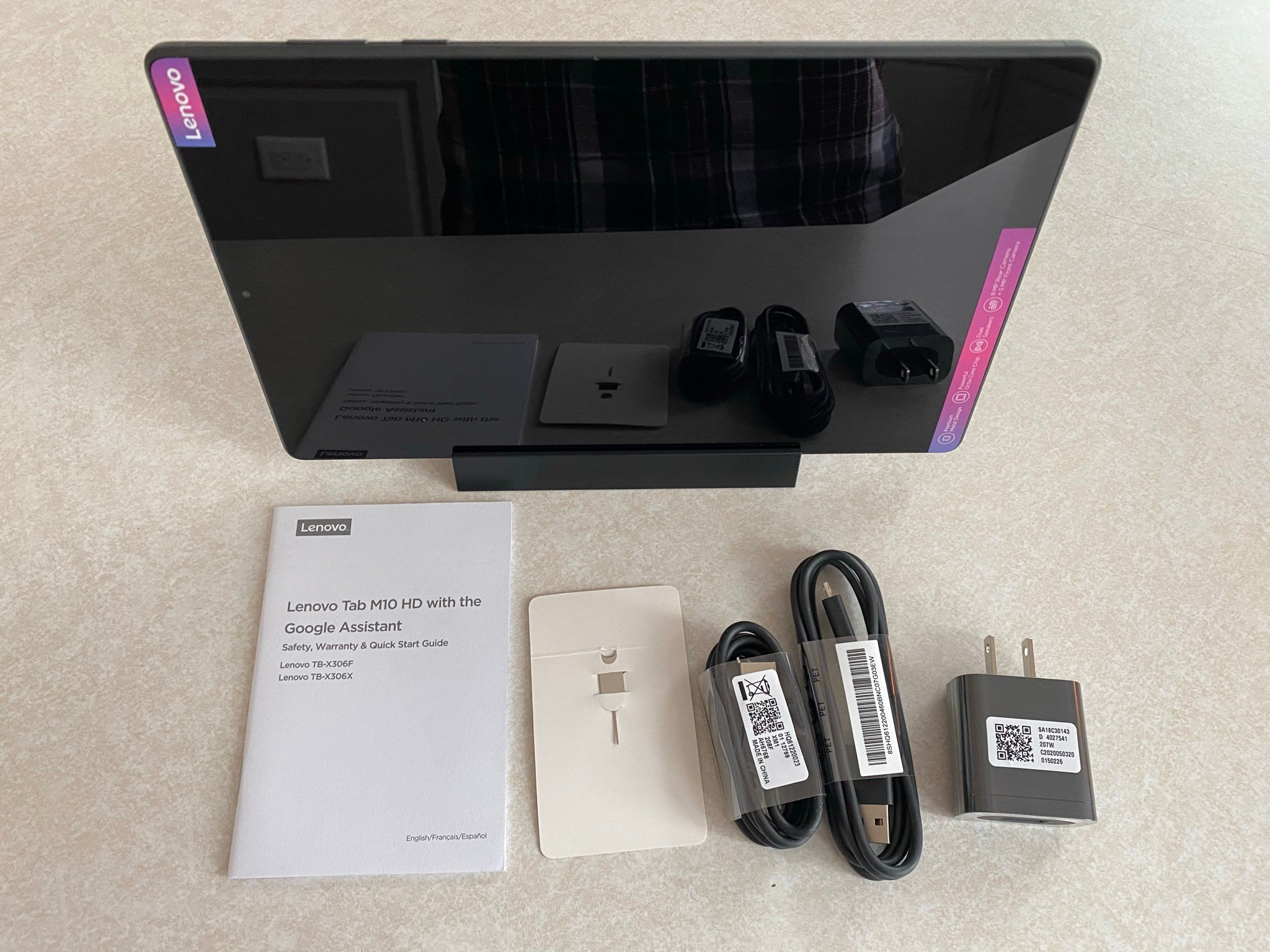 The Smart Tab M10 HD is really an attractive piece of hardware. I would even say it’s on par with an Apple iPad in terms of design and build quality on the surface. The tablet is constructed of aluminum alloy with a glass slab covering most of the 1280×800 10.1” screen.

Overall, the dimensions are 9.5” x 5.88” x 0.32” and weighs .92 lbs. The Lenovo Smart Tab M10 HD is powered by a MediaTek 8-core processor running at 2.3 Ghz with 2GB of RAM. Onboard, there is 32GB of eMMC storage with the ability to add an additional 1TB using the microSD slot. The tablet is powered by a 5,000mAh LiPo battery rated at 8 hours of video playback or 10 hours of browsing. The tablet runs Android 10.

Included with the Smart Tab M10 HD is a small charging stand that holds the tablet upright. In this position the tablet resembles a large digital assistant or digital photo frame. The charging stand connects to the included 5v 2A adapter via an included microUSB charging cable. The tablet can also be charged directly using the included USB-C cable. 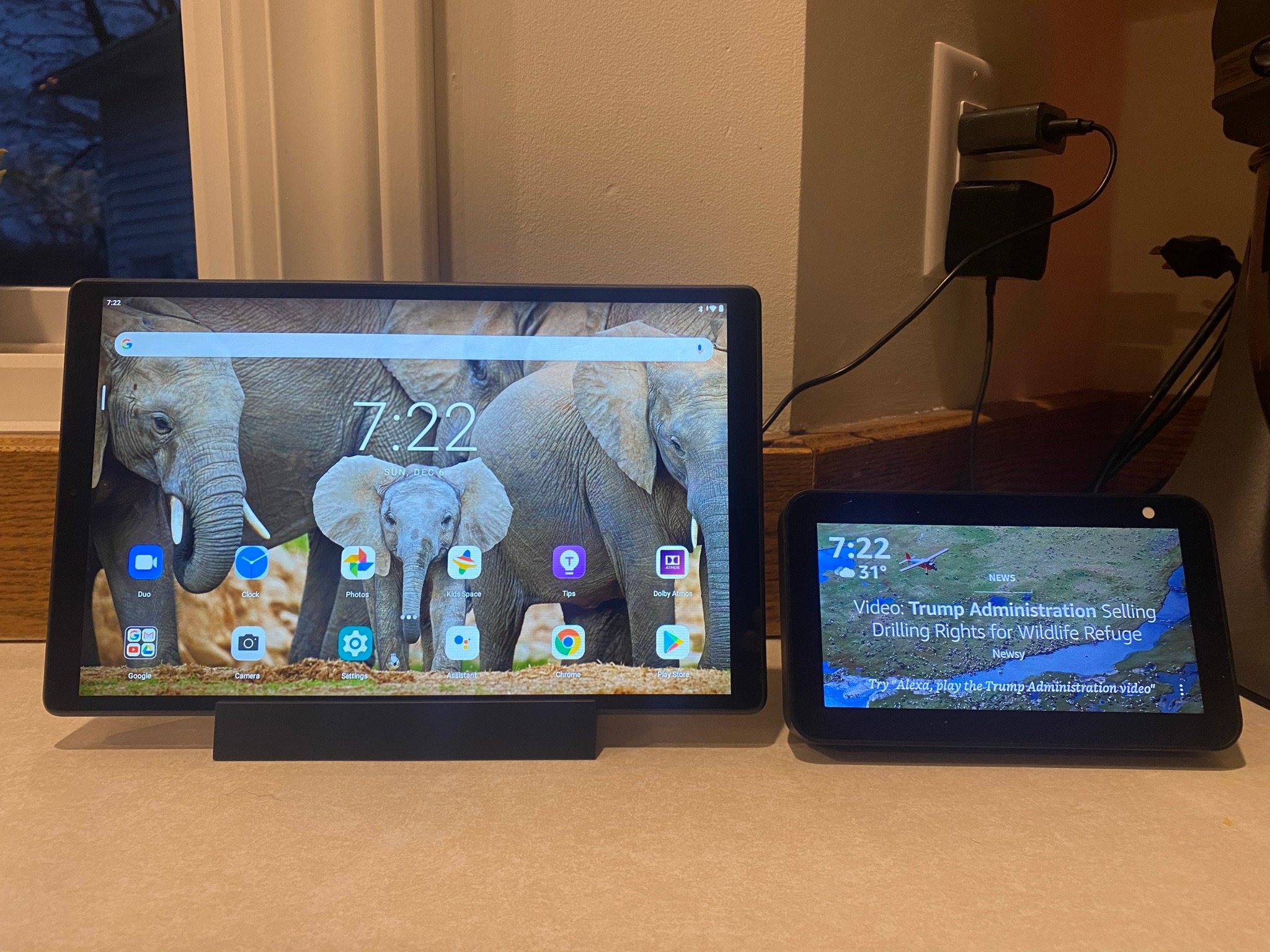 The tablet boasts Dolby Atmos enabled side-firing speakers and while they weren’t awful, they were a little tinny and I would much rather listen to music through a portable bluetooth speaker. They were adequate for video or movie purposes, although you won’t be getting anywhere near home theater-like audio experience despite support for Dolby Atmos.

My intended primary use for the Lenovo Smart Tab M10 HD was as a digital assistant similar to the Google Nest Hub or Echo Show line of smart displays. Having the charging dock stand, I assumed incorrectly that the tablet would enter a “Show Mode” as Amazon calls it on their Fire Tablets. Google did in fact add this feature called “Ambient Mode” recently and the Lenovo M10 HD tablet is supposedly one of the supported devices. 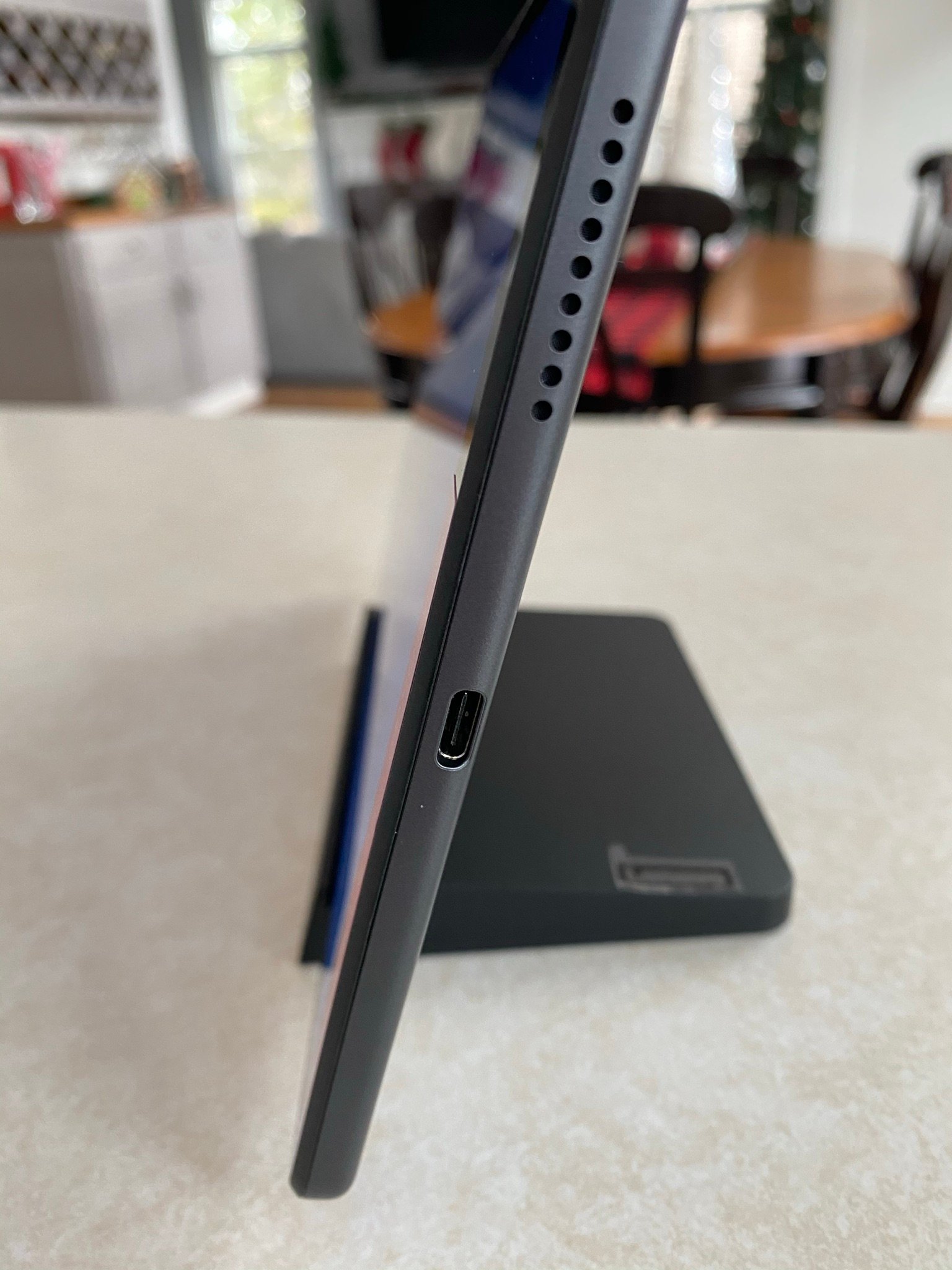 Unfortunately, despite finding “How-To’s” on setting up this mode, I was unable to successfully add the M10 Tablet as a Google device. Ambient mode will occasionally show slideshow photos of a selected photo album, but mostly; the Lenovo Smart Tab M10 HD sits next to my Amazon Echo Show 5 with a black screen. Unfortunate, since my house is automated and secured using mostly Google products including Google WiFi and Nest Cams.

Double-tapping the screen will bring up Ambient Mode allowing you to use voice commands as you would other Google Home Hub devices. Pressing the power button; however, will bring the user to the full tablet application launcher. I am disappointed that despite the name, “Smart Tab M10 HD (2nd Gen) with Google Assistant,” that it requires you tapping or powering on the device in order to launch voice commands. This isn’t necessarily a knock on the Lenovo Smart Tab itself, since Google Android is driving the functionality. That said, Amazon Fire Tablets also run a version of Google Android and they have enabled a simplified way to activate Show Mode allowing their tablet to become a smart display assistant.

If you are a casual user of tablets, I think that you could be completely happy with the Lenovo Smart Tab M10 HD. Its 10.1” high definition screen is great for web browsing, watching movies and shows, or light gaming. Because it runs Android 10, you have full access to countless apps on Google Play store. 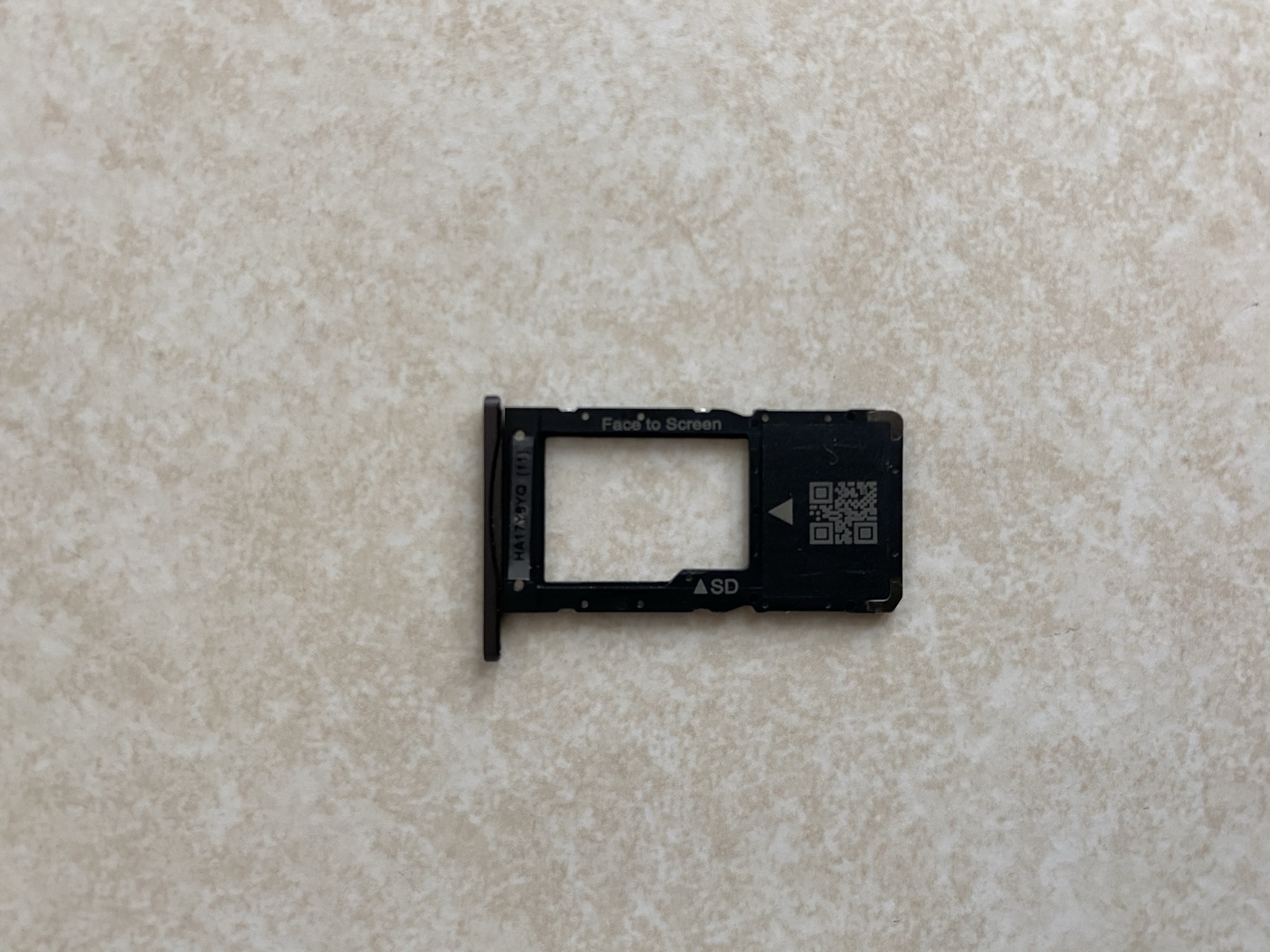 Like many other tablets not called iPad, you won’t find many custom accessories such as fitted cases and keyboards. There are some available for the Smart Tab M10, but there are going to be limited options unless you go with “generic” accessories. One review for the tablet I came across complained of not being able to find a case that works with the included stand.  Additionally, the Smart Tab M10 does not have native support for pen or stylus input such as the iPad Pro, Windows Surface or even some of the Samsung Galaxy Tab devices.

Again, with a retail price of only $130, you can’t complain too much when an entry level Apple device starts at almost 3x more. Personally, I just don’t have a good use case scenario for a tablet device. My hopes of using it as a smart display ultimately let me down and for a similar price; I think I would be better going with a Google Home Hub or Amazon Echo display device with their “always on” displays.